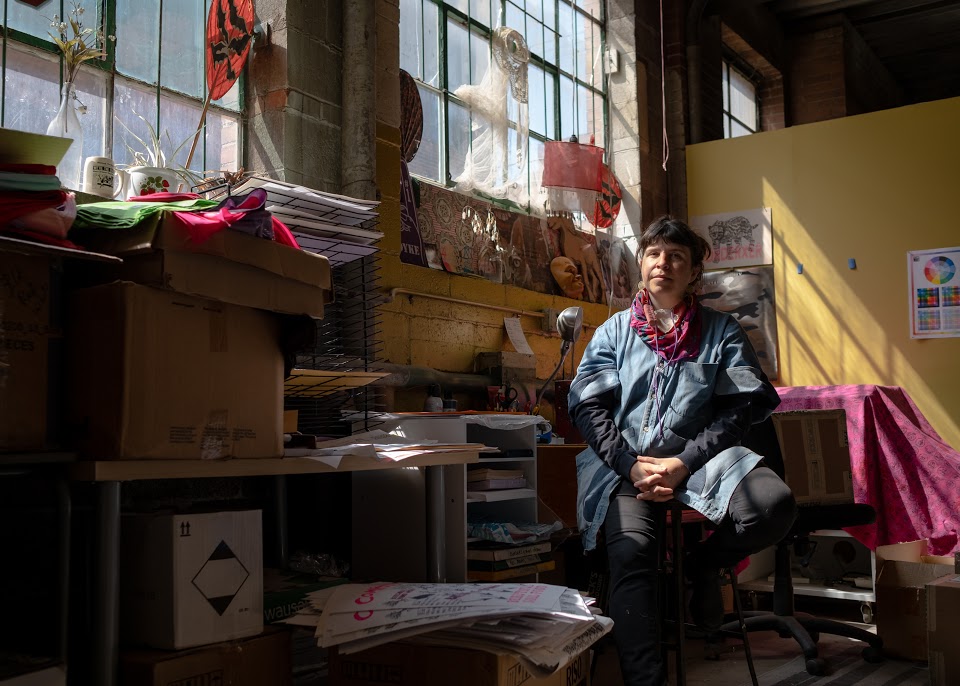 Mary Tremonte in the shared space she uses as an art studio. (Photo by Quinn Glabicki/PublicSource)

Mary Tremonte, an artist who lives in the North Side, creates artwork in a shared studio. The small group agreed to get monthly COVID-19 tests to feel safer around each other.

Her understanding, like many others, was that COVID testing is supposed to be free to save lives.

For two tests she had done in December and January, she received a bill in early April from her UPMC insurance for $237.50. This filled her with a mix of thorny emotions.

“Shock, anger, frustration,” Tremonte said. “Obviously I wouldn’t have gotten a test if I would have known I’d be charged $100 for it.”

While the CARES Act has provisions intended to remove costs for individuals seeking COVID tests, anyone with insurance can still be charged if the test is not recommended by their doctor. People without insurance can be charged, even with a doctor’s recommendation.

A September 2020 New York Times article reported that insurance did not fully cover the cost of the test 2.4% of the time. While federal dollars were put aside to pay for testing uninsured individuals, providers are not legally required to use these funds.

Both UPMC and Highmark have charged customers for tests not recommended by doctors. That means, Pittsburgh-area residents have had to face unexpected costs and make careful decisions about where — or sometimes if — to get a test.

Caitlyn Arroyo-Myers’ husband heard of a potential COVID exposure at his manufacturing job in June of last year, so the couple from Washington, Pennsylvania, decided to get him tested at MedExpress. They had no copayment and did not receive a bill through their Highmark insurance.

Then, in October, he needed another test, so the couple went back to MedExpress, where they were both advised to get tested.

“And she goes, ‘OK, so that’s going to be $50 from each of you,’” Arroyo-Myers said. “I said, ‘This is not our first COVID test, and we were not charged the last time. Can you tell me why we’re being charged now?’ And she said, ‘Oh, it must just be a policy change,’” Arroyo-Myers said, “which wasn’t really an answer.”

Some two weeks later, the couple received a bill in the mail: $50, for the husband’s first test from June.

“They didn’t even ask us to pay anything until after our second appointment, our second test, months later,” Arroyo-Myers said.

MedExpress bills patients’ insurance for tests and then the insurance company decides how much it will cover of the bill, according to the MedExpress website.

Peter Shankman, a New Yorker who hosts a popular lifestyle podcast about ADHD, tweeted in late February that he has paid $305 four separate times in order to get a test for his daughter whenever she returns to school.

“Highmark's cust-serv response? ‘You should go to a free clinic.’ WT actual F?” he wrote in the tweet.

“I was like, ‘Wait a minute, I thought these were supposed to be free?’ And they’re like, “Well, not from us,’”

Highmark’s official Twitter account responded to Shankman, apologizing for the response on the phone and pledging to help him “find less expensive and more convenient alternatives” in the future.

“We also agree that it is outrageous to be charged hundreds of dollars to obtain a prescription for a COVID-19 test, and it is absolutely appropriate to question such a bill,” Highmark also tweeted.

Highmark did not respond to an email inquiry from PublicSource, but, according to its website, Highmark only covers tests recommended by a doctor, and doctors can only recommend a test if they deem you’re showing symptoms of COVID.

UPMC has a similar policy, covering tests at no cost when recommended by a licensed healthcare provider for individual diagnosis or treatment. Anyone with UPMC insurance who receives a bill for such testing should contact UPMC to potentially file a claim, a spokesperson wrote to PublicSource.

Connor Hayes, 27, travels back and forth across the country between California, where he attends law school, and Mt. Lebanon. In order to fly to school back last August, he received a test at CVS. His UPMC insurance billed him $39.

“I just assumed it’s a public health crisis,” Hayes said. “Just writ-large, any cost related to a testing visit would be covered.”

He called to file a grievance, on the grounds that COVID tests should be free, and ultimately got the bill removed.

“I have enough of a balance in my checking account that I could have paid it if I needed to, but it was kind of the principle of it,” Hayes said. “I want to make sure people can get as many COVID tests as they can get.”

For uninsured residents, like 49-year-old Verna Frison of Uptown, costs are all over the place. After calling MedExpress, she learned getting a test there would cost her more than $200, she said.

“I was like, ‘Wait a minute, I thought these were supposed to be free?’ And they’re like, “Well, not from us,’” Frison said.

Frison ended up going to a free clinic in East Liberty. The Allegheny County Health Department has a permanent, free testing clinic in McKeesport and has offered tests at no cost in other locations throughout the pandemic. Allegheny County residents can also dial 211 for information on testing.

And that’s the way it should be, Frison said.

“I think they should be free,” she said, “and I thought it was all part of the money that was allocated for the pandemic.”