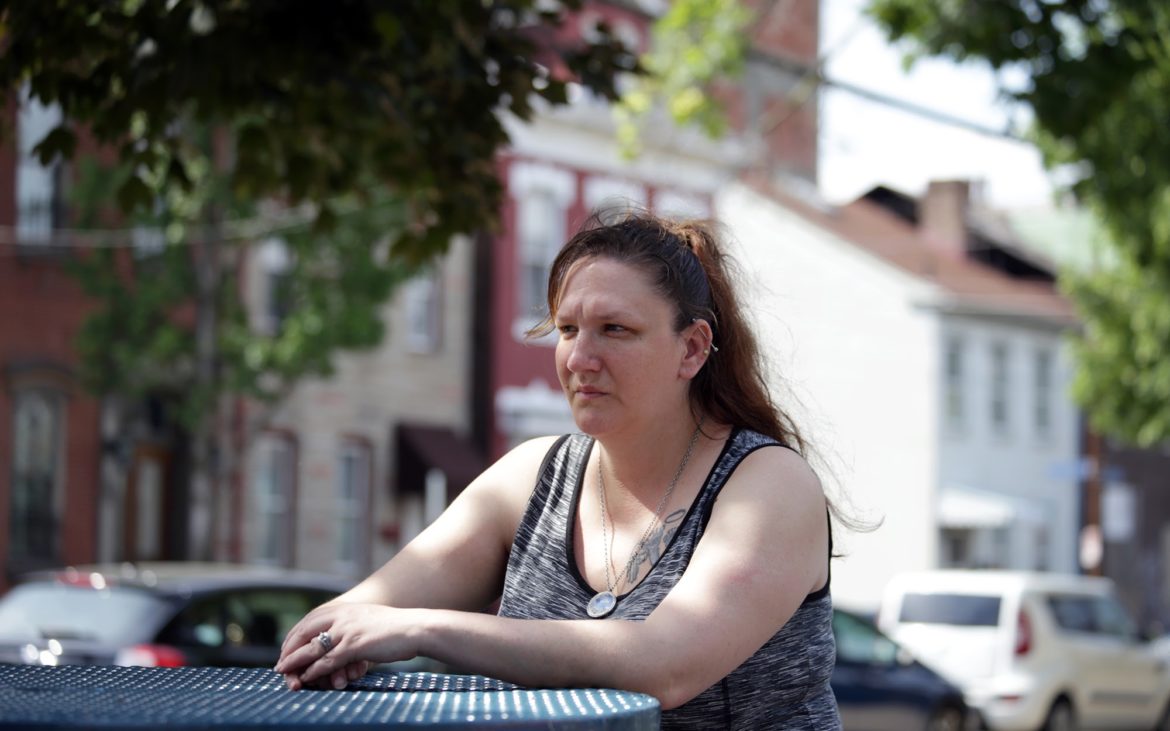 “I’m not saying that nobody is above my child,” says Amanda McKnight, 37. “But here’s an 11-year-old child, an 11-year-old boy….murdered in his own home, and you don’t have nothing?” (Photo by Ryan Loew/PublicSource)

Things would be different if David had been killed by a stray bullet. The pain would still be there, but if no one truly meant to harm her son, Amanda McKnight thinks she could come to terms with the lack of justice.

After 18 months, maybe she wouldn’t be so desperately looking for answers. Maybe she could accept that county homicide detectives have nothing. No leads, no theory. Nothing from any witness to explain how an innocent child can be shot to death playing PlayStation 2 in his own living room.

But David McIntyre — only 11 years old — didn’t die by accident.

He was struck by bullets aimed by a gunman who intentionally entered the family’s Mount Oliver home. It was a peaceful autumn night, the roar of a virtual crowd turning the living room into a ballpark. Then an explosion of shots, David struck in the head, his brother CJ Mikula-Conrad wounded on the floor.

McKnight ran from her bedroom to find her boys on the floor. Blood spread through CJ’s T-shirt. She shook David’s arm, hoping the wound somehow wasn’t fatal. Then she’s outside, barefoot in the cool air, before being led to a neighbor’s house to talk with police as CJ, then 16, is rushed to surgery. The Allegheny County Police admit they’re stuck. A year and a half later, they say they’ve run down every lead they had. Now they’re relying on any rumor or shred of a clue to push the case forward.

McKnight’s voice is one in a chorus of local grief. In Allegheny County, hundreds of murders remain unsolved by the two agencies responsible for solving them. Dead ends are routine, though county detectives succeed more often than detectives in Pittsburgh.

McKnight sits in her kitchen, pointing out a white and gray cat named “Charcoal,” which she says is like David reincarnated. That was his cat, now climbing up a cabinet door in their South Side row house, and it’s one of many reminders of David she keeps close.

There’s cupcakes on the table, a freezer full of ice cream. CJ, who still carries bullets in his arm and torso, is turning 18 the next day, and the family is celebrating.

Because David is gone, this is the type of event where a mother invites media so his name stays in the news.

“I understand there’s other homicides. I get that.” McKnight said, venting frustration at the lack of answers. “It bothers me that David’s is still a big question mark." CJ Mikula-Conrad was seriously wounded in a shooting that killed his brother David. (Photo by Ryan Loew/PublicSource)

On the night of the shooting, Nov. 1, 2015, the family lived up the hill in Mount Oliver. It’s a sliver of a borough, surrounded by the city of Pittsburgh, but with its own police department and local government.

Allegheny County detectives investigate all homicides in Mount Oliver, like they do for any county case outside of Pittsburgh city limits.

McKnight doesn’t have much praise for them, but detectives have a far better solve rate than the Pittsburgh Bureau of Police, the much larger department that would have handled the shooting if it happened just a few blocks to the west.

Pittsburgh detectives have a patchy record. From 2010 through 2016, they’ve solved 55 percent of 371 murders from those years. Meanwhile, county detectives solved more than two-thirds of their 326 cases.

Not only does the county fare better by percentage, but detectives there also solved more cases by pure volume.

That’s not to say David’s case is in better hands. Not solving a third of murders over seven years is hardly a triumph, but the stats show a difference in the two agencies’ ability to get killers off the street. County Police Superintendent Coleman McDonough is candid in explaining that some murders just don’t get solved. Those that do hinge on specific facts.

“Cases very similar to this have come in after long periods of time,” McDonough says of David’s murder. Each homicide is “very, very fact and circumstance specific.”

But county police do have a few advantages.

In large part, the department exists to lend investigative muscle to local jurisdictions. They don’t patrol countywide or answer citizen calls on the same level as other departments. They investigate, taking the lead on all county murders outside Pittsburgh city limits.

They also have seasoned investigators, including two homicide detectives previously from Pittsburgh.

In Pittsburgh, the unit assigned to homicides has only a handful of detectives with more than a few years of experience, Assistant Chief Lavonnie Bickerstaff said. Officers are like free agents, and the bureau is competing with more lucrative jobs at other agencies.

With 20 detectives, and two more on the way, Bickerstaff said the city’s Violent Crime Unit has the manpower it needs for homicides, but the learning curve is steep.

The county, meanwhile, has 18 detectives assigned to homicides. Those detectives take the lead from local police, but they also get help from borough officers who might help round up witnesses or pass on tips.

Mount Oliver, which covers about 200 acres, had eight homicides from 2010 through 2016. Three, including David’s, are unsolved.

The highest homicide totals are in McKeesport, Wilkinsburg and Penn Hills, which collectively had 132 cases in that period and only half solved.

But offenders don’t pay attention to city boundaries, so the divisions don’t mean much other than to indicate which police force investigates. If a witness refuses to talk in the county, the result is the same as when a witness doesn’t talk in Pittsburgh.

“People know,” Bickerstaff said about Pittsburgh’s cases. “They have the information. They know what’s going on. They’re just not giving it to us.” *Note: One homicide had a male Hispanic victim who is not represented on this graphic. Percents are rounded. Source: Allegheny County Police Department

Bickerstaff said clearances have improved recently, and the bureau is actively trying to improve relations with residents — a vital step in increasing solve rates. The county, meanwhile, is dependent on local police to build trust so witnesses will talk when detectives show up on the scene.

In Wilkinsburg, Chief Ophelia Coleman said she’s nothing but satisfied with the county’s help, even when murders aren’t solved.

“It’s just not that easy,” Coleman said. “You need a lucky break.”

In Mount Oliver, Chief Matt Juzwick said he knows the county is committed to David’s case. But they rely on the public. So far, they’re missing that lucky break.

“Sometimes it comes to a dead end,” Juzwick said.

But, she wonders, why won’t police come back and recanvass? Cases don’t get solved if victims are forgotten.

“For somebody to deliberately walk into my home and nobody’s seen nothing...” she said. “That’s what bothers me the most.” Amanda McKnight can't understand why nobody is sharing information on her son David's murder. (Photo by Ryan Loew/PublicSource)

CJ, who has David’s name etched in a tattoo of a cross on his forearm, did see the shooter. He described him as a white man in his late twenties or early thirties. He wasn’t wearing a mask or gloves. McKnight can’t believe the shooter wouldn’t hide himself for the crime but cowers now. CJ’s memories are patchy, though, and detectives have known what he saw for more than a year.

McKnight’s father was there, too, but in a different room when the shooting started. He rushed to David’s side, and she thinks the emotional trauma took a toll on his health. He passed away in August from a heart attack.

David is buried with a ball and glove. His biggest dream in life was to be a baseball star. His hero was Andrew McCutchen, whose name he’d mispronounce as “McCrotchen.”

He loved Olaf, the bumbling snowman from Disney’s “Frozen,” who’s now etched into his headstone. He would have turned 13 on May 12, and McKnight’s heard nothing new. Top: CJ Mikula-Conrad, wounded in the shooting that killed his brother David, shows a tattoo he got in honor of his brother. Bottom: Amanda McKnight, 37, leans against her son CJ as they sit on the steps outside their South Side home. (Photos by Ryan Loew/PublicSource)

Schurman doesn’t sound hopeful. But he said in cases like this, a shooter may slip up and start talking. That’s why it’s important to keep the family involved, he said. It could be months, or years, but any information they pass on — a rumor, even an urban legend — could be the elusive tip detectives need to make an arrest.

She calls for updates, and gets none. She feels like David’s case is just another file on the desk.

She’s seen plenty of outpourings of sympathy. A packed candlelight vigil, kind words from strangers who recognize her from the news.

But like too many families, both in Allegheny County and Pittsburgh, she knows what it’s like to feel that attention, and then realize the void left when the case hinges on witnesses, and nobody’s willing to do the one thing that matters: Talk.

“It’s like we’re back at square one,” she said. “Nobody heard nothing. Nobody saw nothing.”

How did we get our numbers?

Homicide totals and clearance information (whether cases are solved) were provided by the Allegheny County Police Department and the Pittsburgh Bureau of Police for 2010 through 2016. The tallies in the story do not include deaths caused by police, and they do not include incidents if a victim was injured before 2010 and died during the seven years analyzed.

For our analysis, a case is considered solved if a suspect has been identified and arrested, or if the death is ruled an accident, self defense or cleared because an identified suspect died.

Importantly, the numbers here do not match yearly clearance rates reported to the FBI, which include all cases solved during a specific year, regardless of when the murders happened. Instead, our analysis looks at the murders that occurred during the seven-year period and whether they have been solved.