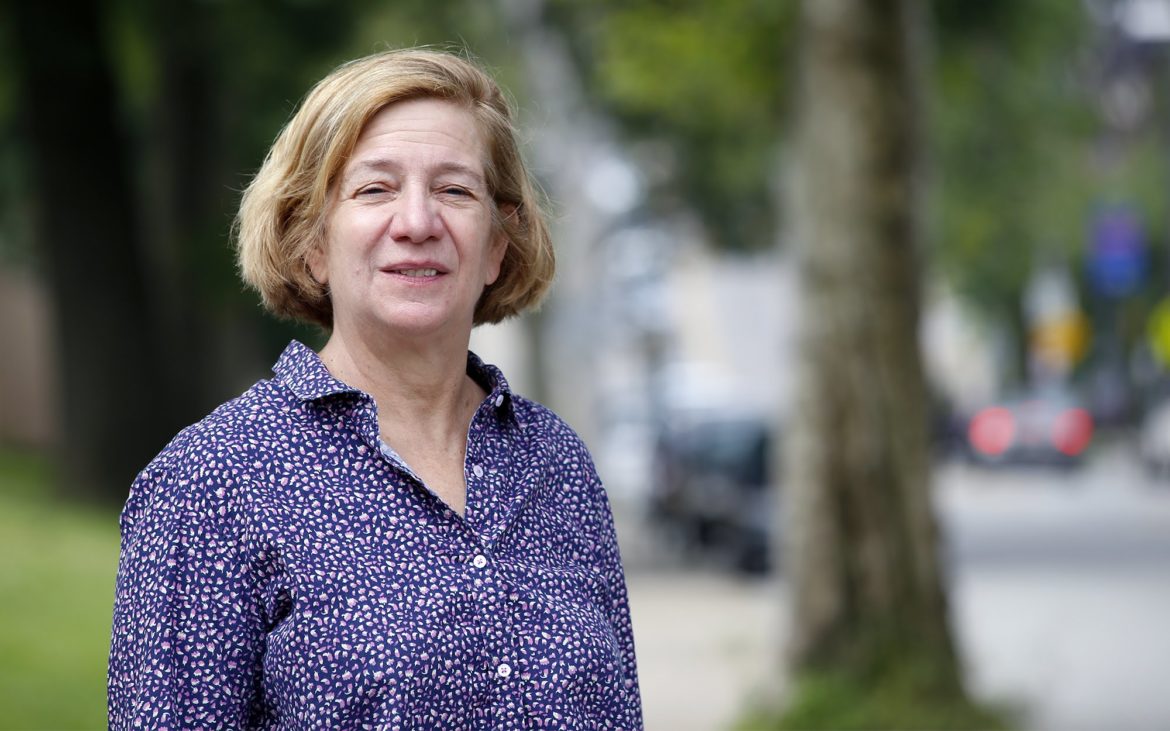 "Safety and accessibility should be for everyone, including disabled residents, elderly, bicyclists — and kids going to school," writes Sabina Deitrick, secretary of the Taylor Allderdice High School Parent Teacher Organization. (Photo by Ryan Loew/PublicSource)

Some things in local government should be easy.  But, as many residents know, some things are not.

Beginning in 2017, as a parent of an Allderdice High School student and secretary of the Parent Teacher Organization [PTO], I worked with other parents to request that the City of Pittsburgh paint high-quality, high-visibility crosswalks at the school. At most intersections, there were either no painted crosswalks or they were of very low quality.

There are many forms of safety for school crossings that are expensive, but high-visibility paint for crosswalks to a school — how hard can that be?

I eventually learned that our efforts were following years of unsuccessful and less-than-successful efforts by school officials, parents and neighbors, all trying to get safer crosswalks for students.

In 2015, Mayor Bill Peduto signed an executive order making Complete Streets a citywide policy to improve Pittsburgh’s health and safety. Complete Streets is a planning initiative to make streets and transportation agencies focus on safety for pedestrians, bicyclists and transit users. I am a member of the City of Pittsburgh Planning Commission and am familiar with the city’s Complete Streets work.

"It’s time to put the Complete Streets executive order to work for students and promote safety at all schools."

Safety and accessibility should be for everyone, including disabled residents, elderly, bicyclists — and kids going to school.

In much of Pittsburgh, students face going to school on Incomplete Streets. Kids walk routes where sidewalks are deteriorated or missing and are forced to walk in the street. Students cross streets wherever and whenever — to the consternation of motorists — often because no pedestrian crosswalks are visible. And, in the Allderdice example, even when called to paint school crosswalks, the city’s effort is incomplete and of poor quality.

In my own attempt to get crosswalks painted, things started smoothly. I contacted City Councilman Corey O’Connor who represents much of the Allderdice feeder area. His office immediately contacted the Department of Public Works and put in a request.

It was winter 2017, but I figured it really couldn’t take that long; I informed the PTO that all seemed to be moving along.

Months went by. Finally, after school ended in June 2017, the city got over to Allderdice and painted crosswalks at the school intersections. Well, after five-plus months, at least it’s been done, I thought.

No, not so. Many intersections that needed crosswalks had not been painted. Some of the crossings were standard traditional parallel line crosswalks, not a high-visibility option or one recommended for urban schools on congested streets. And, even in the case where a better crosshatched crosswalk was painted, the paint quality was substandard. It looked as if it had been painted years earlier.

I sent a few complaints to the Mayor’s office in the fall and in January 2018 received word from the city’s Department of Mobility and Infrastructure [DOMI] via email. The department representative reported that the crosswalks were painted in water-based paints, saying that they would not last as long as thermoplastic markings and must be repainted at least annually.

The DOMI representative did not explain why the thermoplastic markings were not done in the first place and why the City of Pittsburgh doesn’t have high-quality, high-visibility painted crosswalks at all schools already.

Almost two years later, the crosswalks were not refreshed annually and now are faded.

Why do parents, school administrators, residents, children and city council members have to spend months and even years on requests for the city to embrace safe school crossings at schools in the City of Pittsburgh?

It’s time to put the Complete Streets executive order to work for students and promote safety at all schools. The city has just received a Safe Routes to School grant from the Pennsylvania Department of Transportation. This comes at a great time to address school safety comprehensively across all schools in Pittsburgh.

It’s time to bring city schools into Pittsburgh’s Complete Streets program. And it’s time to paint – using the right materials – high-visibility school crossings at all Pittsburgh schools. This summer is a great time to get going.

Sabina Deitrick is secretary of the Taylor Allderdice High School Parent Teacher Organization. She is also a member of the Pittsburgh Planning Commission and an associate professor at the University of Pittsburgh Graduate School of Public and International Affairs. She can be reached at sabina.deitrick@gmail.com.