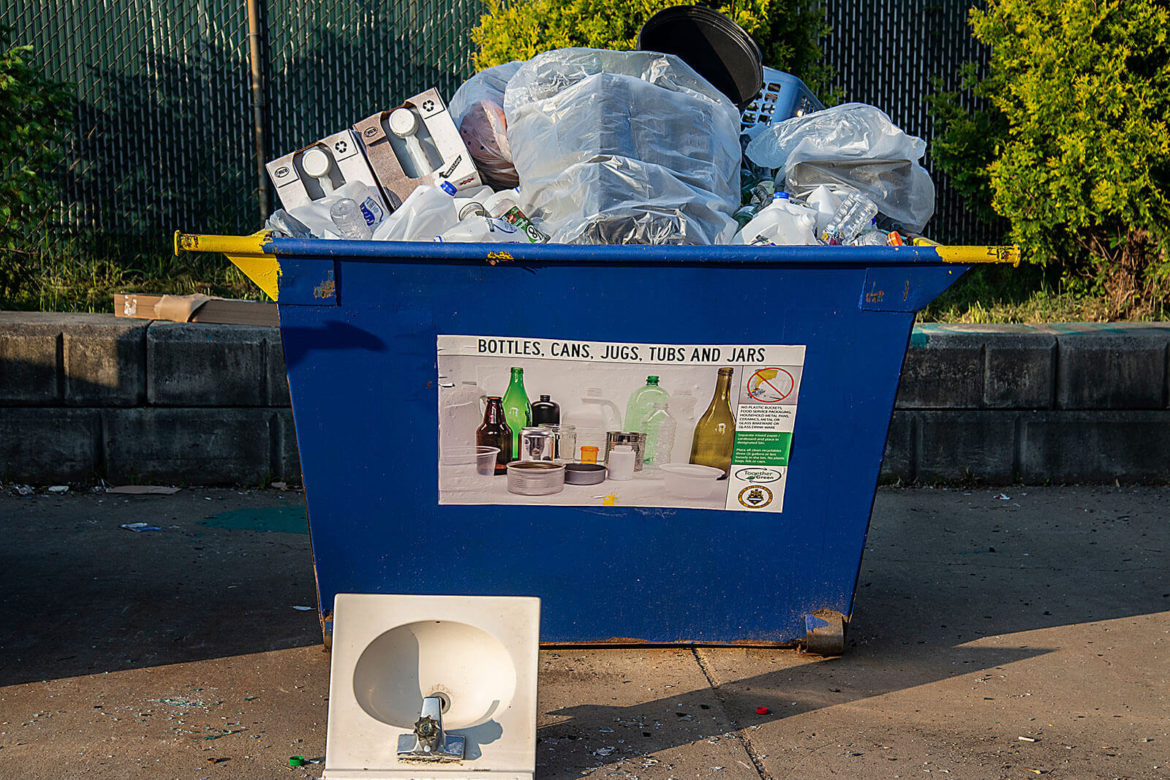 A recycling container in Construction Junction’s drop-off lot in North Point Breeze. The poster shows the bottles, cans, tubs, jugs and jars that can be recycled in the City of Pittsburgh. (Photo by Teake Zuidema/PublicSource)

As part of the Covering Climate Now global reporting initiative, we asked you, our PublicSource readers, to tell us what you wanted to know about climate change in Pittsburgh. We selected six of your questions and answered them for you below.

1. Is there any chance of a plastic bag ban? How big of a difference would it make?

It’s difficult to evaluate chances for a plastic bag ban but the chances of it happening before 2021 are slim. Earlier this year, Pennsylvania Gov. Tom Wolf signed legislation that prevents municipalities from banning or taxing plastic bags until the end of 2020. In the interim, state agencies are researching the potential impact of such bans. Pittsburgh City Council unanimously opposed the legislation in a letter to Wolf on June 27.

Councilwoman Erika Strassburger said city council is looking into ways to decrease plastic bag consumption. If legislation is enacted at the city level after the end of 2020, a focus would be on equity, she said. “If there’s a [plastic bag] fee involved, we don’t want the burden to be on those who have the least ability to pay a fee,” Strassburger said.

Some local organizations and businesses are taking matters into their own hands.

Animal welfare organization HUMANE ACTION Pittsburgh, for example, started an initiative called “no plastic please” to encourage local residents and businesses to reduce their consumption of plastic. Although the initiative has broad community support, director Sabrina Culyba said getting retailers to opt in has been challenging. “A lot of businesses, their bottom line is at stake when it comes to making these switches,” she said. HUMANE ACTION Pittsburgh’s website lists participating restaurants and retailers.

Giant Eagle is currently conducting its own research on how to decrease the use of plastic bags in its stores. “Historically, Giant Eagle’s focus has been on recycling… But as an organization committed to our communities and our planet, we recognize that we have a responsibility to do more,” Dan Donovan, director of corporate communications, wrote in an email to PublicSource.

In a 2019 report by the environmental campaigning organization Green Peace on grocery store chains and plastic pollution, Giant Eagle scored poorly; it was ranked No. 16 out of 20 retailers for its overall practices regarding single-use plastics. Giant Eagle operates nearly 500 grocery and convenience stores.

While reducing plastic bags is one step toward sustainability, it’s not a fix-all solution. Sustainable Pittsburgh, a nonprofit organization that promotes sustainable development in the region, is facilitating cross-sector conversations on how to tackle the problem of single-use plastics in the region. “It’s going to take more conversations to figure out what we can do here,” Executive Director Joylette Portlock said. “Because it’s not just straws, and it’s not just plastic bags.”

And, reusable bags aren’t a perfect solution. Studies show that the environmental impact of producing one reusable bag is the same as producing 131 plastic bags.

2. How much interest or investigation has there been into starting a compost waste program in the city?

The City of Pittsburgh accepts yard debris and Christmas trees at certain drop-off locations, but does not provide disposal of other forms of organic waste. Department of Public Works Director Mike Gable wrote in an email to PublicSource that the idea of a citywide compost program is being discussed, but no plans have been made yet. The City’s “Zero Waste” program aims to divert 90% of waste from landfills by 2030.

The absence of a citywide compost program isn’t due to a lack of interest. Laura Codori, founder of the local vermicompost company Worm Return, said she often gets calls from people asking if there is a compost drop-off site or pickup service. “People want to do this,” Codori said. She recently co-proposed a compost drop-off program to the Department of Innovation with Anthony Stewart of the environmental consulting firm DECO Resources.

3. If the Green New Deal or a similar proposal were to be enacted, what would that mean for Pittsburgh’s historic buildings and churches?

While the version of the Green New Deal that was struck down by the Senate in March doesn’t address historic buildings specifically, it does call for “upgrading all existing buildings in the United States.” However, buildings with historic designation are exempt from the International Building Code’s energy code at this time. They’re not subject to the same energy standards. It’s hard to say if, or how, future legislation could change that.

Marc Mondor, cofounder of local sustainable architecture firm evolveEA, said purchasing all ENERGY STAR appliances is another option for buildings with more constraints. “There is always something one can do to get closer to lessening the carbon footprint of the building,” he said.

4. Who is working on efforts that would specifically help our region reduce our greenhouse gas [GHG] emissions and mitigate impacts of climate change, and what are the opportunities to support those efforts?

Grant Ervin, the city’s chief resilience officer, said he believes the top five things Pittsburghers can do to reduce GHG emissions are:

City Planning is creating a ‘Green Guide’ for residents that will be released online by the end of the month.

Switching to green energy can make a big impact, as 81% of Pittsburgh’s GHG emissions come from buildings. That’s why Phipps Conservatory created its Green Power Drive. Visitors can sign up to switch to Green Mountain Energy and receive an annual membership for doing so. Through the program, more than 4,550 homes have switched to green electricity, the equivalent of saving roughly 36,400 tons of carbon dioxide a year. “This shows people that every individual choice makes a big difference,” said Phipps’ President Richard Piacentini. Green Mountain says that, on average, their green electricity is $6 more expensive per month than typical suppliers.

Opting for a bicycle over a car is becoming even easier. The city’s new bike plan is on track to be finalized by early 2020. The city says it will help make bicycling safer and more efficient.

5. What position, if any, does the Allegheny Conference on Community Development take on climate change, and do they have any plans to support businesses in reducing their GHG emissions?

CEO Stefani Pashman said the Allegheny Conference is committed to sustainability. “While we know there is no one-size-fits-all approach to sustainability, the Conference believes that in order to remain globally competitive, offer the highest quality of place and attract the best talent to our region, it’s incumbent on us — members of the region’s business community — to incorporate sustainability in everything we do,” Pashman wrote in an email to PublicSource.

One way the Allegheny Conference is supporting the reduction of GHG emissions is by advocating for the Commercial Property Assessed Clean Energy (C-PACE) legislation that is being considered in Allegheny County. C-PACE provides industrial, commercial or agricultural property owners access to low-interest, long-term loans for clean energy and water conservation. The loans come from private lenders approved by the municipality or county and are repaid through property tax payments. C-PACE loans can be used for projects like whole-building insulation, geothermal heating and cooling or heat recovery systems.

6. What is being done to install electric charging stations for all-electric and plug-in electric hybrid cars in the area?

To start off, let’s get the landscape for how many of these cars are in use locally. At the end of 2018, there were 4,665 electric or hybrid vehicles registered in Allegheny County, according to the Pennsylvania Department of Transportation’s Report of Registrations.

According to the U.S. Department of Energy, there are roughly 250 Level 2 chargers and more than 50 DC fast chargers for public use in the Pittsburgh region.

Several local entities are working to increase that number.

East Liberty is also set to get more chargers. In August, the city received a $245,000 state grant to install six charging stations, accommodating two vehicles each, in the parking lot at 6117 Kirkwood St. They are expected to open by the end of the year.

Driving PA Forward, an initiative by the state Department of Environmental Protection created to help reduce diesel emissions statewide, began offering rebates last year toward the installation of electric vehicle charging stations. Funding amounts vary, with public charging stations eligible for up to $5,000. Roughly $7.7 million will be put toward the project over a five-year span.

This story was fact-checked by Remy Davison.