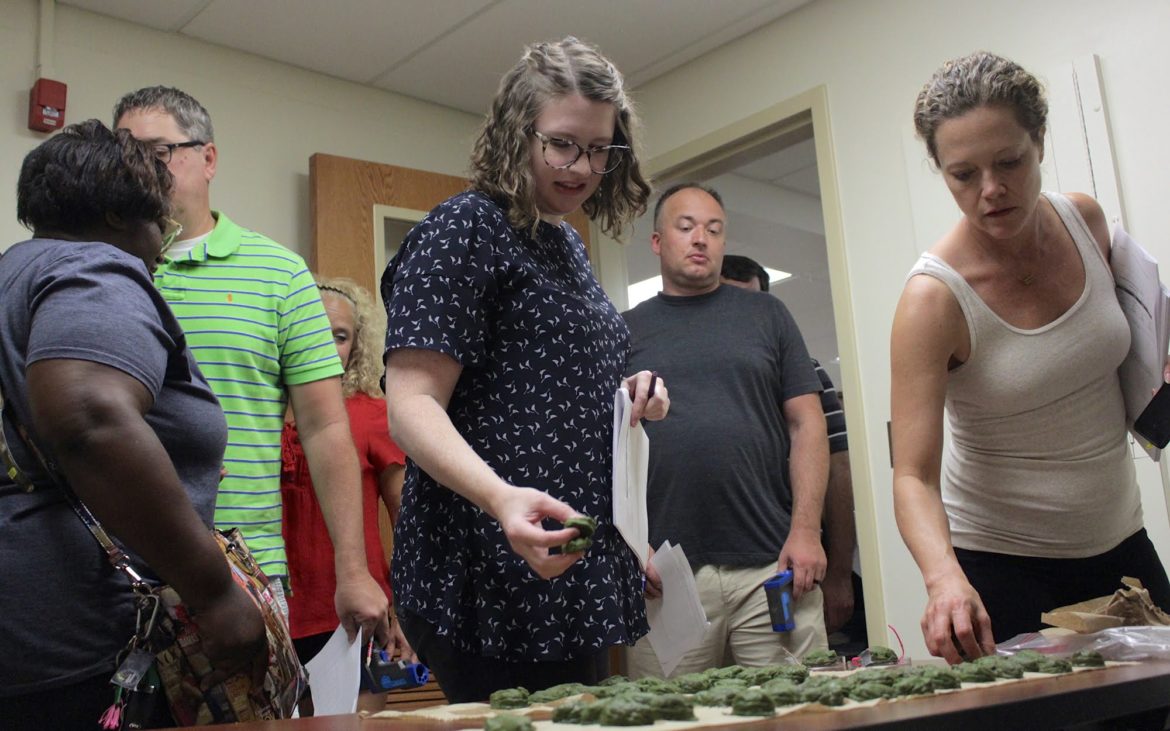 Teachers pick up model frogs to conduct a climate change experiment at the University of Pittsburgh in August. (Photo by Jay Manning/PublicSource)

Allderdice High School biology teachers Angela Lindenfelser and Mariah Diehl stood in the sweltering heat of an August afternoon taking the temperatures of model frogs placed outside of Langley Hall at the University of Pittsburgh.

The models simulated the water content in real frogs, and about two dozen Pittsburgh teachers examined how the body temperature rose — even in the shade — to levels that could prevent a real frog from jumping far enough to find food or water or escape predators.

“Think of frogs as canaries in the coal mines,” said instructor Rainee Kaczorowski, an outreach coordinator for Pitt’s Department of Biological Sciences. “They are a good indicator of what’s happening in the environment.”

Pittsburgh Public Schools, like other local districts and charter and private schools, incorporate climate change into the science curriculum. But it’s not a requirement.  Pennsylvania is one of about 10 states without requirements that climate change be taught in the classroom.

Shy of mandates, the state Department of Education has standards for study of the environment and ecology. These standards include lessons in 10th grade for students to analyze how human activities may cause changes in an ecosystem and the environment.

The state Board of Education recently directed the Department of Education to start updating the state’s science standards to “align them with current research and best practices,” according to a Sept. 12 release from Gov. Tom Wolf. That process will include a review of the Next Generation Science Standards [NGSS], which explicitly include climate change curriculum. Implementation of new standards could take more than two years, according to the Department of Education.

NGSS has been adopted as the official science curriculum by 19 states, according to the journal Scientific American.

Without mandates, districts and schools in Pennsylvania independently decide how much of a priority to make the topic in science curriculums. Some districts are more proactive than others.

“While ‘climate change’ is not explicitly stated, the concepts of climate change could be addressed by a school curriculum in any number of the subchapters found in the (state’s) Academic Standards for Environment and Ecology,” Eric Levis, press secretary for the education department, wrote in an email.

In the Mt. Lebanon School District, students are required to take a geoscience course as a graduation requirement. The courses cover such topics as environmental pollution, global change and sustainability and how human interaction can impact the Earth’s systems.

In Woodland Hills, the topic is expected to be a top priority this year after the school board was the first in the state to adopt a climate change resolution in July. The national resolution, called “Call to Climate Change Action,” commits the district to “advocate for climate action leading to climate restoration” and notes that children are especially vulnerable to the accumulation of greenhouse gases.

The resolution directs Superintendent James P. Harris to establish a Climate Change Committee that will oversee curricular and educational opportunities, facility and operational priorities, a climate-friendly food service and advocacy with local, state and federal lawmakers on climate policies. The committee will be open to board members, administration, staff, parents, students and community members.

The resolution, similar to ones approved by 55 districts across the nation, was brought to the board by the environmental organization Communitopia, which, funded by the Heinz Endowments,* provided climate change workshops to Woodland Hills students. Some of those students lobbied the board in favor of the resolution. 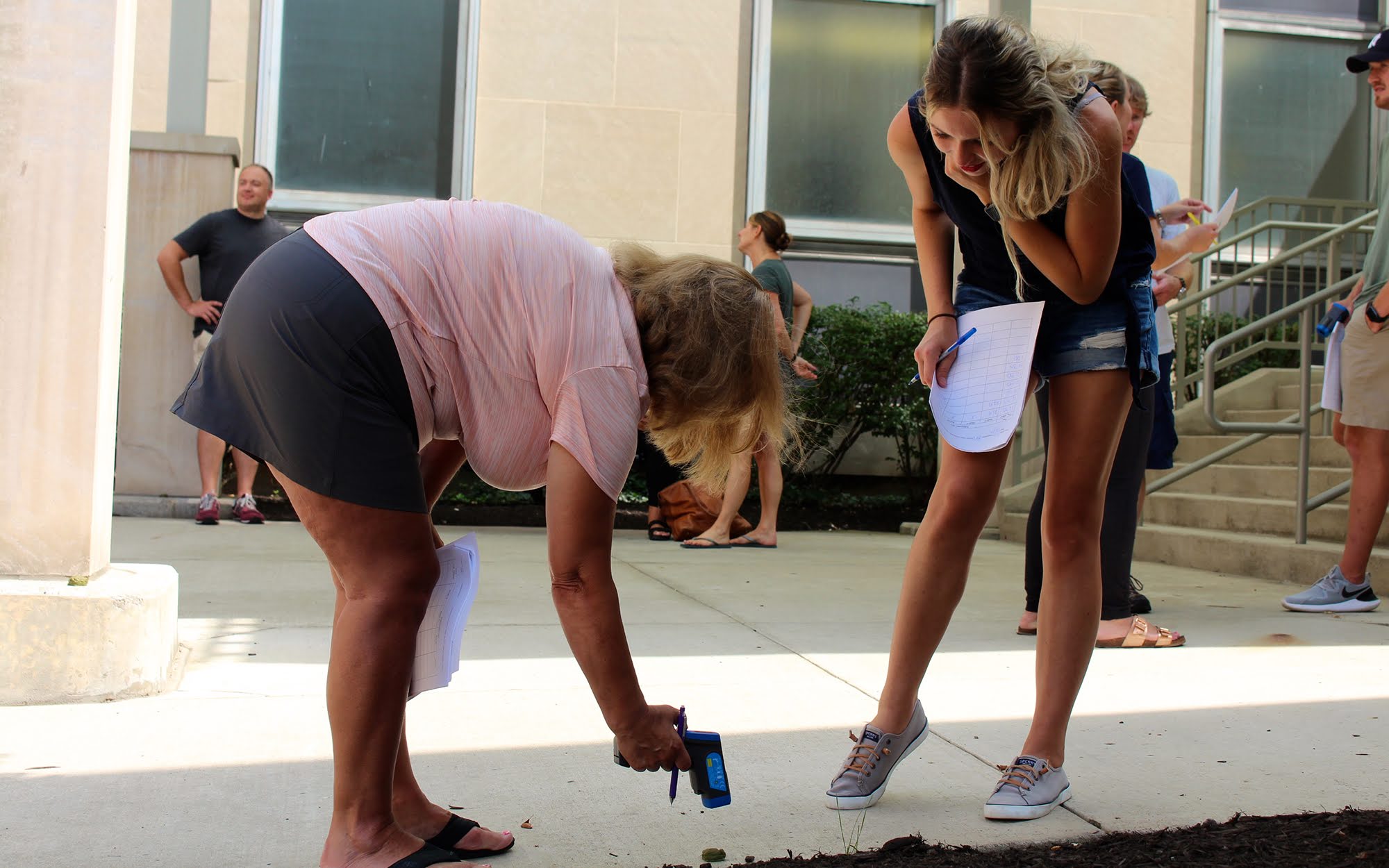 The Pitt program attended by the Pittsburgh teachers in August, called “Ectotherm ER: Frogs Under the Weather,” is funded by the National Science Foundation and the Grable Foundation.* It is provided free of charge to districts, said Becky Gonda, assistant director of outreach in the biology department.

The program provides teachers with supplies and lesson plans they need to teach the lesson in their classrooms.

In addition to Pittsburgh, teachers in 24 school districts in nine Western Pennsylvania counties have participated in the training and used the lesson with their students, Gonda said.

In Pittsburgh schools, students start to learn about climate and weather in elementary school.

“Every year in elementary in every unit there is some connection to weather and climate. Whether it be a water system or ecosystem. But the idea is that it builds so students have an understanding that climate change exists from K-5,” said Rhonda Graham, K-12 science curriculum supervisor.

By sixth grade, Pittsburgh’s teachers are covering global warming and its impact on habitats and ecosystems and students spend several weeks on a project that has them analyzing what climate change means for organisms in their habitats, Graham said.

A big part of the lesson is “looking at human activities and the good and bad and ugly of them and how they contribute to climate change,” Graham said. The curriculum used is “Science and Technology Concepts,” developed by the Smithsonian.

Lindenfelser and Diehl said climate change can be a challenging topic to teach because of its complexity and the skepticism of some students.

But the activity with frogs will be a specific measurable lesson for students — one that can lead to discussions about how the decline in the number of frogs will affect the larger ecosystem.

“What happens to their prey if they aren’t around. And their predators don’t have food. We can go up the food chain,” Lindenfelser said.

At Shady Side Academy, a majority of eighth-grade students take an environmental science class where climate change is introduced early in the course. Hands-on activities demonstrate for students the concepts of greenhouse warming and how carbon dioxide buildup accelerates it, said science teacher John Matia.

To understand the natural greenhouse effect, students create miniature greenhouses in bottles and measure temperatures as the bottles sit in the sun. Then, after adding carbon dioxide to some of the greenhouses, they learn through their measurements that the temperatures rise more quickly, Matia said. 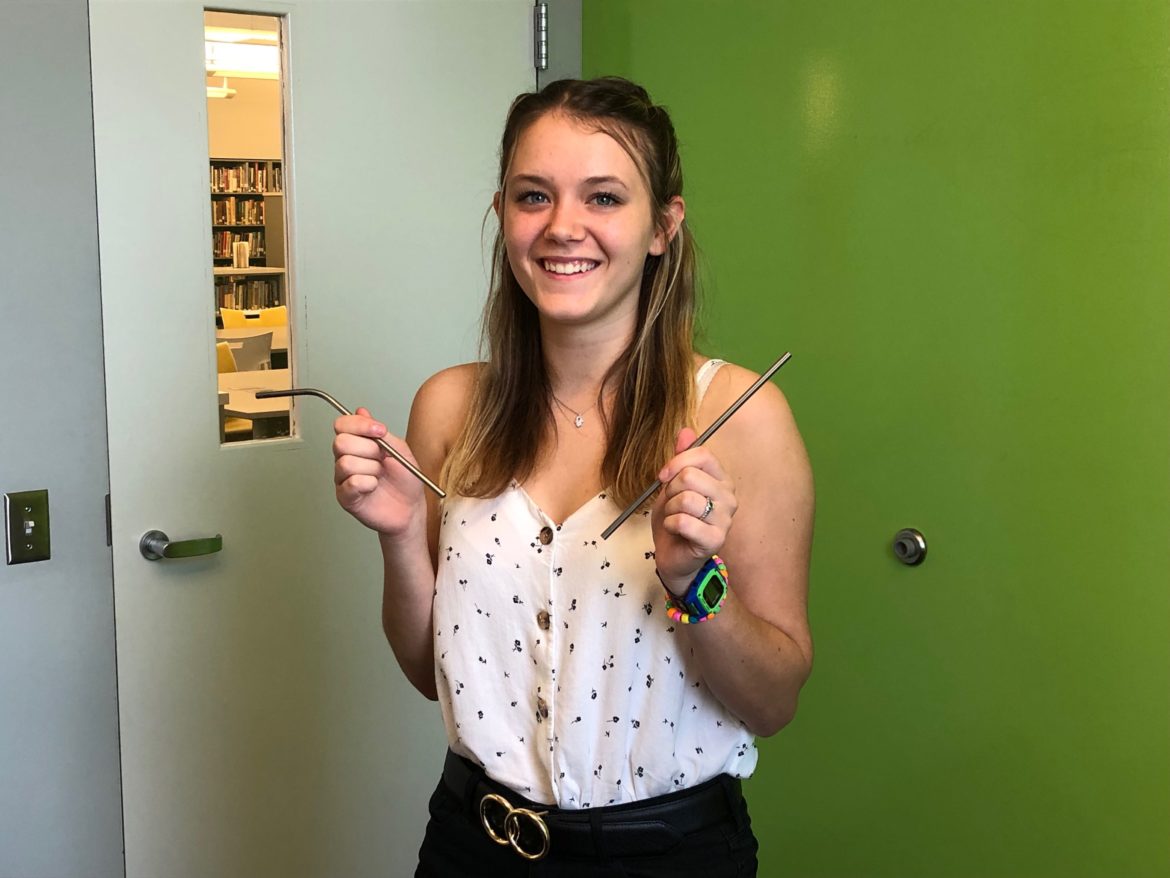 Ryleigh Murphy, a junior at North Hills High School, holds the metal straws she keeps in her backpack to avoid the use of plastic straws. (Photo by Mary Niederberger/PublicSource)

North Hills High School junior Ryleigh Murphy sees climate change as an urgent issue. She said her only course that covered climate change was an environmental science elective. But it was a trip to St. Croix in the wake of Hurricane Martha that convinced her to start reducing her personal carbon footprint.

Murphy, 16, was part of the effort to help rebuild severely damaged homes of island residents and it prompted her to research weather changes caused by climate change.

She’s now a vegetarian, carries her own containers to restaurants to avoid using Styrofoam containers for leftovers and keeps metal straws in her backpack to give to friends who use plastic straws.

Murphy participated in the Youth Climate Strike in March and plans to be part of the Sept. 20 climate strike as well.

She said most of her peers don’t share her concerns about the environment.

“A lot of teenagers haven’t opened their eyes,” she said, “but we are the generation growing up with the effects of climate change.”

Correction (9/20/2019): The previous version of the story misstated the name of Shady Side Academy and the title of science teacher John Matia.

Mary Niederberger covers education for PublicSource. She can be reached at 412-515-0064 or mary@publicsource.org

This story was fact-checked by Samuel Marks.

*Grable Foundation and The Heinz Endowments have provided funding to PublicSource.