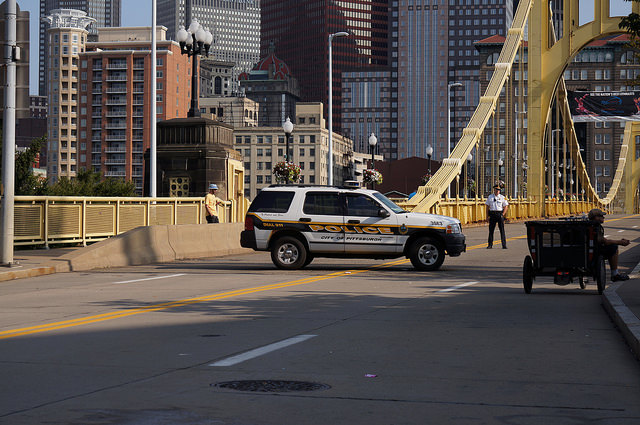 Pittsburgh and several other cities have been increasing security measures following the terror attacks in Paris on Friday, but there are no known specific terror threats against the United States.

On Sunday at Heinz Field, football fans saw an increased number of law enforcement officers patrolling their tailgates and security was beefed up in the stadium for the Steelers game against the Cleveland Browns.

Following the events in Paris on Friday, we are closely monitoring events and have been in communication with the Department of Homeland Security and the FBI, which have informed us that there are no known threats against NFL stadiums.

Sonya Toler, spokeswoman for the Pittsburgh Department of Public Safety, told PublicSource in a statement that “public safety personnel are actively working with intelligence authorities to identify any indications of local threats and will respond accordingly if any threats are identified.”

Multiple other cities are increasing security in the wake of the attacks, according to an NBC News report.

New York deployed a task force of 500 that is dedicated to responding only to terror attacks. The New York Police Department was planning this strike force for months, but in the wake of the attacks in Paris, Monday was the first day they were on the streets.

"Having officers there in plain sight, visible with long weapons … can be a visual deterrent to somebody that might be looking to launch an attack," said Don Borelli, a former FBI assistant special agent in charge who is now a senior vice president with the Soufan Group, a security firm.