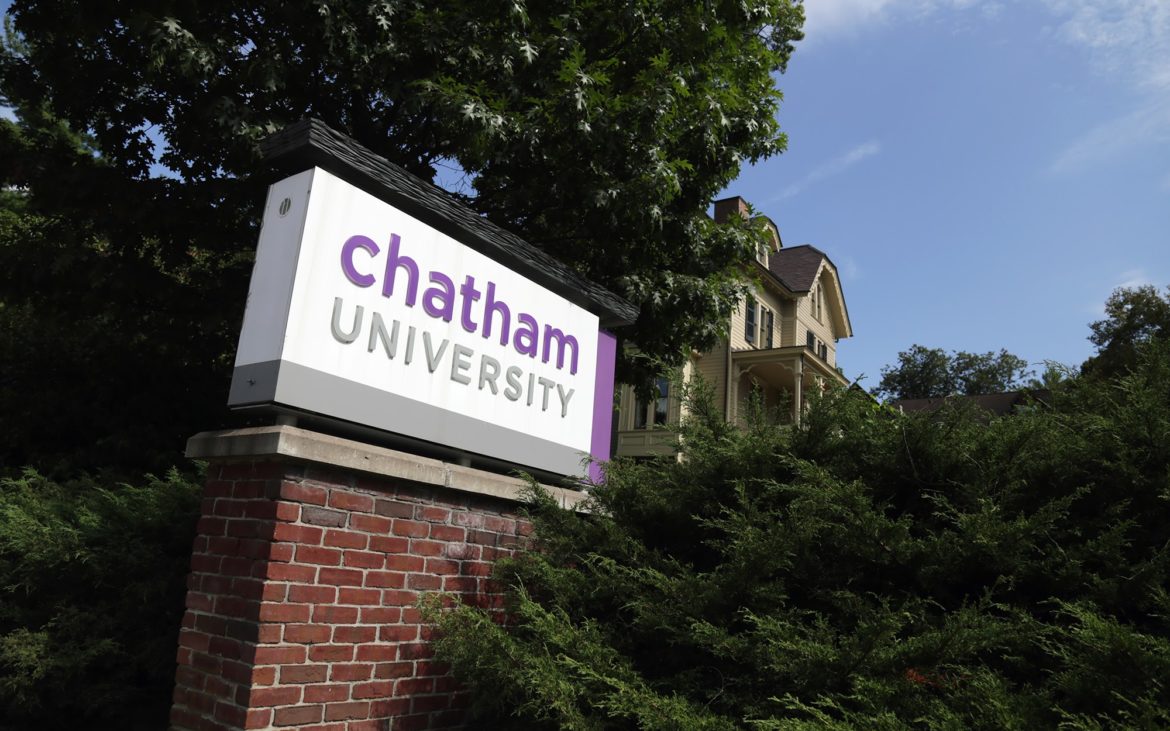 A view of Chatham University's campus from Fifth Avenue in Oakland. (Photo by Ryan Loew/PublicSource)

In a PublicSource report on the self-injury policy at Chatham University last month, we shared the stories of three young women. They had each experienced a mental health crisis while attending Chatham.

According to the honor code at Chatham University, students can be removed from campus housing or expelled for self-injury, expressing suicidal thoughts or threats or attempting suicide. The policy explicitly states that mental health conditions, or the use of drugs and alcohol, will not “diminish or excuse a violation” of the honor code.

One woman we interviewed said her health was endangered because she felt she had to hide her depression from school officials. According to the students’ accounts, Chatham enforced a mandatory leave of absence on another woman and threatened the third with eviction from campus housing.

In the days following publication, many students and alumni shared their own stories and reactions to the policy online, contacted PublicSource to share their experiences and even created an online petition calling for a repeal of the controversial policy.

On Sept. 6, the day after the story published, Chatham University President David Finegold released a statement, announcing the creation of a task force to review the policy. He also emphasized Chatham’s commitment to students: “I want to stress for those students who are dealing with mental health issues, please know that our Counseling Services department and response team are here to support and help you, not to discipline you.”

Although Finegold’s response was comforting to some, doubts linger about the university’s approach to mental health issues. This is what PublicSource has learned about the response to the policy in the last month; it includes an update on the task force’s work, perspectives on campus counseling and students who spoke out against the policy.

*The names of students who shared information about their own mental health and experiences with the policy were changed to protect their privacy.

Why do some students feel Chatham’s counseling services are inadequate or they couldn’t trust using it?

Finegold directed students to counseling on campus, but several students and alumni said campus counseling services weren't equipped to deal with their needs or they didn't think it was safe to share what they were truly going through.

One student who we’re calling Kate said she visited counseling services during her first year at Chatham. She did but didn’t find it helpful.

“They really did not seem competent enough to handle the emotions I was feeling, and that they were more equipped to deal with students who were stressed over a paper, not students who were dealing with serious mental illness,” she recalled. “After that, I didn't see a therapist for a year because I didn't have the means to.”

Now she questions if the task force will create real change. And she is not alone.

According to Sue, the experience was hampered by a climate where students with mental illness feared consequences for divulging mental health concerns; students were concerned that counseling services would report admissions of self-harm or suicidal thoughts to the administration.

"We all just collectively knew that we couldn’t lean on the university for support."

Sue said they wouldn’t report friends to public safety or seek help on campus to avoid jeopardizing scholarships or their futures at the school.

“I was personally friends with several people who I knew self-harmed or who had suicidal thoughts, and we all just collectively knew that we couldn’t lean on the university for support, so we leaned on each other, vented to each other, kept each other company, sometimes held onto someone’s razor for a while until the feeling passed,” she said. “It was not ideal, but what else could we do?”

Jen, a current Chatham student, says she was diagnosed with complex post-traumatic stress disorder. She describes Chatham’s policies concerning mental health as “cold” and “unhelpful.” After having a breakdown during a school year, she says she sought a recommendation for long-term therapy from campus counseling services. She says she was met with repeated questions on if she planned to attempt suicide. She described the experience as “triggering.”

“I knew if I ever voiced these things to the wrong person or too loudly I could get kicked off of campus,” she said. “This is my only home. I am homeless aside from school, because the place I came from is terribly abusive.”

Three things current and former students shared about the policy in response to the story:

“It’s clear the clause in the honor code exists to protect the university, not its students with mental illnesses,” Bracken wrote in an email to PublicSource. “The students in the article lost so much fighting battles they did not choose. Mental illness, self-harm and suicidal thoughts are not choices.”

Signors of the petition described the policy as “draconian” and “unfathomable,” with some sharing how strong mental health policies and referrals have saved their lives in other educational institutions.

Bracken’s interest in policies concerning students living with mental health conditions is a personal one. As an undergraduate student at another university, she struggled with anxiety and suicidal thoughts and said she was tired of hiding anxiety disorder due to policies similar to Chatham’s.

“The university may have appointed a task force to review the code, but it’s only effective with reparations for past students and active change,” she wrote.

What is the task force going to do and when is it expected to complete its review of the policy?

Campbell wrote in an email to PublicSource on Oct. 5: “Right now, the task force looks like they will be finishing their work the week of October 23rd or the following at the latest. Still nothing further to share until their work and any recommendations are complete.”

According to Finegold’s release last month, the task force members include:

When the task force members were announced, several people questioned why students or outsiders weren’t involved. The university declined to respond to questions about the composition of the task force.

Atiya Irvin-Mitchell is a former PublicSource intern and a 2017 graduate of Chatham University. She can be reached at atiya@publicsource.org or you can follow her on Twitter @AtiyaWrites.