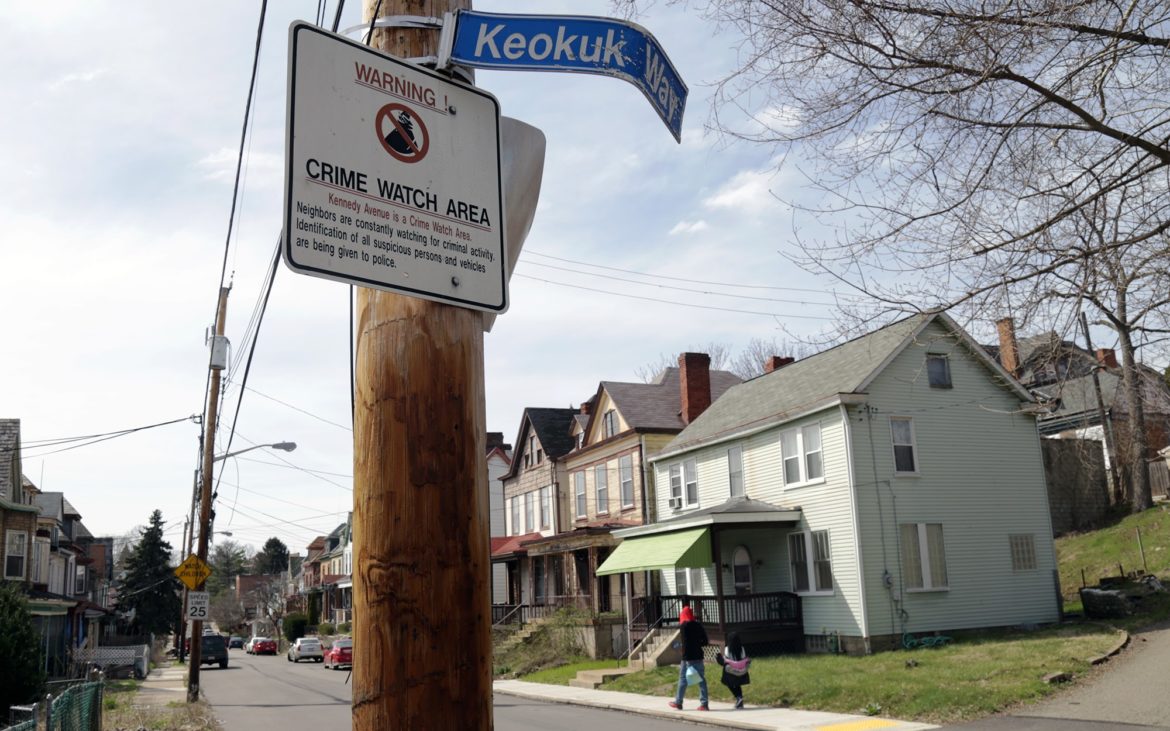 On the North Side, Rob Conroy says he’s called 911 for gunfire “probably about 16 times” since moving to Perry South in the fall of 2015. Pictured is a crime watch sign on Kennedy Avenue near Perrysville Avenue. (Photo by Ryan Loew/PublicSource)

If you were to distribute shootings across 2016, gunfire wounded or killed someone more often than every other day in Pittsburgh.

“We have had our loved ones – our loved ones – lay dead in the street,” Rep. Ed Gainey (D-Lincoln-Lemington) told residents at a recent public safety meeting in Homewood, urging them to share information with law enforcement.

Without trust, police are stuck. They don’t just need cooperation to make arrests, they need it to guide anti-violence efforts meant to stall the cycles of shootings and retaliation.

Gunfire is still part of daily life in Pittsburgh. By year-end, the Pittsburgh Bureau of Police tallied 3,300 reports of shots fired across the city in 2016, often with little consequence for the shooters.

Bullets struck people in two-thirds of city neighborhoods, with deep concentrations in Homewood and the city’s North Side. Several of the shootings took place in public, some in broad daylight and some into moving vehicles. On the North Side, Rob Conroy says he’s called 911 for gunfire “probably about 16 times” since moving to Perry South in the fall of 2015.

The densest cluster was in late May and early June, when shots were loud enough to estimate direction and distance. He called nine times.

“I can tell that it’s not somebody lighting off a firecracker,” said Conroy, who is also the director of organizing for CeaseFirePA, a nonprofit focused on reducing gun violence.

The cluster ended in murder – the shooting of Keith Coleman on June 7. Coleman was one of 17 fatal shootings in the North Side, which led the city in gun deaths last year.

In all, 50 people were killed by gunfire and police investigated 193 shootings that resulted in at least one person being injured, sometimes more than one. Those figures represent the worst combined total for shootings with death or injury in seven years of data for Pittsburgh gun violence. Assistant Chief of Police Lavonnie Bickerstaff cites the North Side as one place where the city’s anti-violence program, Group Violence Intervention (GVI), is showing promise.

In the Fineview neighborhood, shootings flared last year in the spring and summer, culminating in a July 4 fatal shooting at the Allegheny Dwellings housing project.

To reduce bloodshed, police identified individuals thought to be involved in nearby violence, then they looked for ways to get them off the street — for instance, through targeted arrests or by enforcing violations of probation and parole.

Police also worked with the city’s housing authority, which later closed a portion of the housing project for redevelopment, to enforce trespassing laws for violent individuals outside the community who weren’t allowed on the property.

How many gun shots have there been near your home? Search our map of Pittsburgh gun crimes.

“Like a surgeon, we’re cutting out the problem,” Bickerstaff said, drawing a sharp contrast between the new strategy and the Pittsburgh Initiative to Reduce Crime, a similar program widely criticized for targeting neighborhoods too broadly.

The point of GVI is to target specific individuals known to be involved in criminal activity and offer alternatives to street life through outreach workers, or else punishment, using the full weight of the justice system.

In the Hill District, Bickerstaff said police worked to contain potential retaliation after a shooting in late 2016 by getting cooperation from families to reach young men they feared would be involved. The situation defused. Bickerstaff knows the message got out because the young men told police directly.

“Some of them could even quote back to us, ‘We know you don’t want us to go to jail. You want to keep us safe,’” Bickerstaff said.

But police efforts have not stopped violence more broadly.

Bickerstaff blames drugs for much of the violence. Shootings tied to drugs, then retaliation for those shootings, so victims and shooters often swap roles and police deal with the same people over and over. Assistant Chief of Police Lavonnie Bickerstaff discusses anti-violence efforts at a forum hosted by the South Pittsburgh Coalition for Peace at The Lighthouse in St. Clair on Friday, April 7, 2017. (Photo by Ryan Loew/PublicSource)

Andre Young, a Stanton Heights businessman and former city council candidate, believes community outreach and education can reduce violence. The key is to show how problems can be solved with words, not violence.

He’s not convinced police are up to the task.

“Their job is to arrest people, not to change people,” said Young, who grew up in Homewood and attended the March 22 public safety meeting at Westinghouse Academy.

At that meeting, law enforcement sought to assure residents they were responding to fatal shootings that have put Homewood on track for another deadly year. But the dialogue quickly grew heated as residents shouted grievances at a stage full of officials, including the city’s police chief and Mayor Bill Peduto.

The mayor promised resources from city hall, including the highest number of officers the police zone has had in more than a decade, and he urged cooperation.

One homicide is too many, Peduto said, and he explained that the city is not waiting for year-end statistics to see if too many residents have again been killed. The day after the meeting, police served a warrant on the New Brotherhood Motorcycle Club, where a 20-year-old had been killed, and the city condemned the building. Bickerstaff calls that action a “baby step.”

Reducing violence will require a customized response for each section of the city, she said. The effort depends on cooperation from residents who can point police and outreach workers toward the people causing the distress.

And, crucially, it requires violent residents to heed the call to stop shooting.

“You can always change your lifestyle,” Bickerstaff said. “You can improve your safety.”

PublicSource Interactives and Design Editor Natasha Khan produced the graphics for this story. The data used in the graphics is from the City of Pittsburgh.

Measuring gun violence is complicated. We know exactly how many people were killed in Pittsburgh, but we don’t know precisely how many people were injured. Instead, we know the number of incidents police investigated where at least one person was hurt by gunfire. Two people could have been struck — or maybe four. Data compiled by the Pittsburgh Bureau of Police does not specifically say. So in 2016, the statistic of 193 non-fatal shootings only indicates that police investigated 193 incidents, not that only 193 people were injured in gun violence.

In several cases, victims are both killed and injured in shootings. We count these incidents separately as gun homicides and non-fatal shootings to give a more accurate view of the toll of gun violence.

PublicSource first analyzed this data in the fall, and since then, police reclassified around three dozen cases over from shootings without an injury to shootings with an injury. In other words, the toll of violence is higher than previously known from 2010 through 2016. Additionally, police have removed a handful of shootings that were initially logged as non-fatal shootings and were changed to homicides because a victim died from their injuries. Our map of shootings has been updated to reflect that information.

2 thoughts on “Can Pittsburgh contain gun violence after a brutal 2016? Police hope interventions will make a difference.”