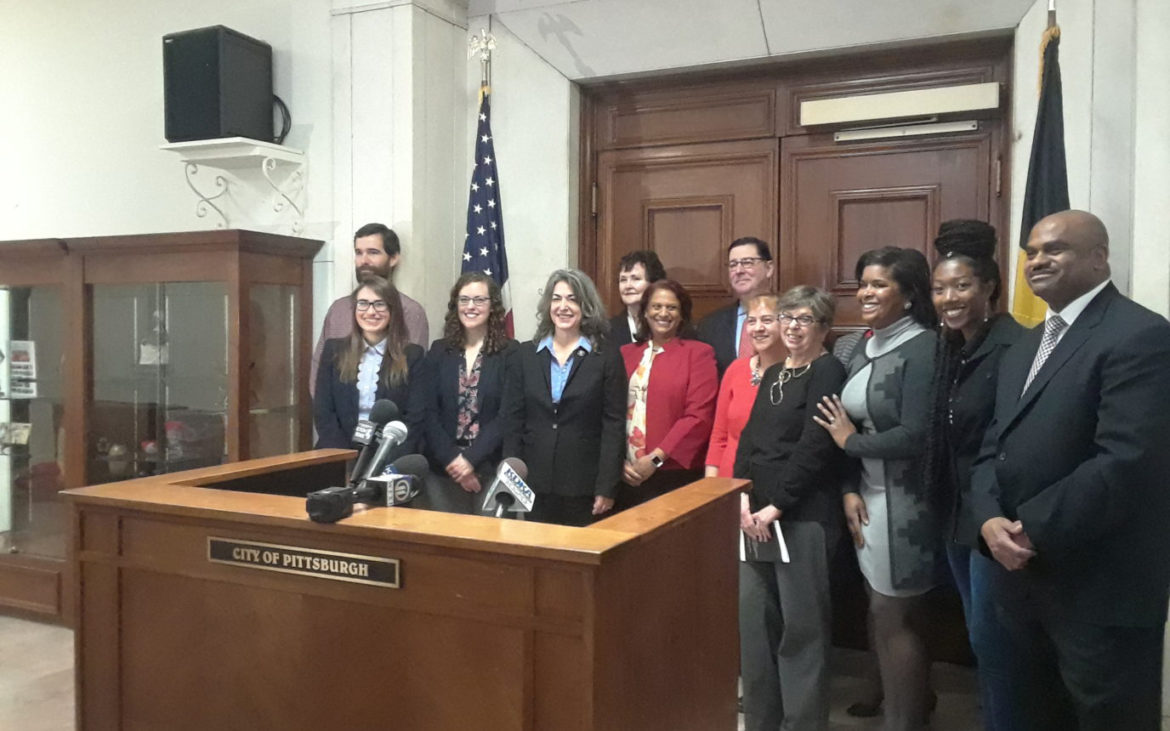 More than a year after former Pittsburgh City Councilwoman Natalia Rudiak helped usher anti-gender discrimination legislation through council, the city on Thursday introduced the members who will serve on its first-ever Gender Equity Commission.

The group’s main charge is to “dismantle gender inequalities in our city,” executive director anupama jain, who doesn't capitalize her name, said at Thursday’s launch event. She acknowledged the commission has its work cut out for it.

“It’s not change that will happen tomorrow,” said jain, who is paid as a part-time employee of the Bureau of Neighborhood Empowerment to lead the commission.

Among city employees, gender disparities are glaring. PublicSource reported last year that a pay gap between men and women, and between white people and people of color, exists in part because the city’s workers are overwhelmingly white and male.

The commission first assembled in December and started holding its monthly meetings in January. It’s work, for now, includes writing bylaws and preparing a request for proposals to hire help for a “gender analysis” that will examine issues of equity within the city workforce. The commission will use that analysis to draft a five-year plan and make recommendations to the city’s departments on how each can structure itself and its policies to be more equitable.

“When you have generations and centuries of gender inequality, which is the reality...we’ve got decades to go until, as a country, we actually have gender parity,” jain said.

The commission has big goals.

As executive director of the commission, jain is uniquely qualified. She is an instructor of gender, sexuality and women’s studies at the University of Pittsburgh and has served as the equity and inclusion consultant for the Greater Pittsburgh Arts Council

The commission, born out of Rudiak’s legislation and launched on the first day of Women’s History Month, is part of Pittsburgh’s answer to a charge the United Nations made nearly four decades ago when it ratified the treaty known as the Convention on the Elimination of all Forms of Discrimination Against Women (CEDAW).

The CEDAW treaty, which acts as a bill of women’s rights, charges countries to pass laws and take other steps to ensure that men and women are equal in every way, including mandates that governments create laws and policies to end discrimination against women and take action so women are equally represented. So far, 189 countries worldwide have signed and ratified that treaty, though the United States has merely signed it. In 2016, Pittsburgh was the sixth city in the U.S. to adopt CEDAW legislation in lieu of a national effort.

In fall 2016, Rudiak introduced legislation for the city to adopt CEDAW’s principles and Peduto signed that legislation into law by December of that year. jain was hired in September 2017 and began assembling the commissioners.

The commission will use data to assess how the city can change policies for its workforce of nearly 3,500 full time employees as well as help shape city-wide policies in virtually every area.

Councilwoman Deb Gross, who chairs council’s Committee on Land Use and Economic Development, wondered how the commission might change the city’s conversation about affordable housing and budgeting for other such equity-building programs.

“Who are we investing in and who are we not investing in? This commission is our opportunity to both ask that question and get that answer,” she said.

For his part, Peduto said he hopes the commission serves as a model for other cities. He said he is willing to make changes to the city’s workforce. The city can’t force any business or group to adopt the commission’s recommendations, he said, but it can serve as role model.

“I’m not trying to force anybody, I just want to be able to show a best practice model that will work on the scale of a 3,500 employee organization and explain to companies throughout the city that have hundreds of employees or 50,000 employees that there is a model you can follow and that it works,” he said. “Hopefully this will just be the beginning for the city of the Pittsburgh.”

When it comes to doing that work of getting companies in Pittsburgh to adopt policies to be more equitable, Cook, the Black Tech Nation CEO, has been there. In her role, she said, she’s met with executives at Google, Uber and other local heavyweights. Right now, she said, “everyone is receptive to hearing people out.” But whether that means making change? She laughed.

No one will want to resign or fire employees to make room for more women or people of color, she said.

“What is it gonna take for a manager to make [change] a top priority just as much as making sure payroll is in on time?” she asked. “When does that importance come in?”

J. Dale Shoemaker is PublicSource's government and data reporter. He can be reached at 412-515-0069 or by email at dale@publicsource.org. You can follow him on Twitter at @JDale_Shoemaker.