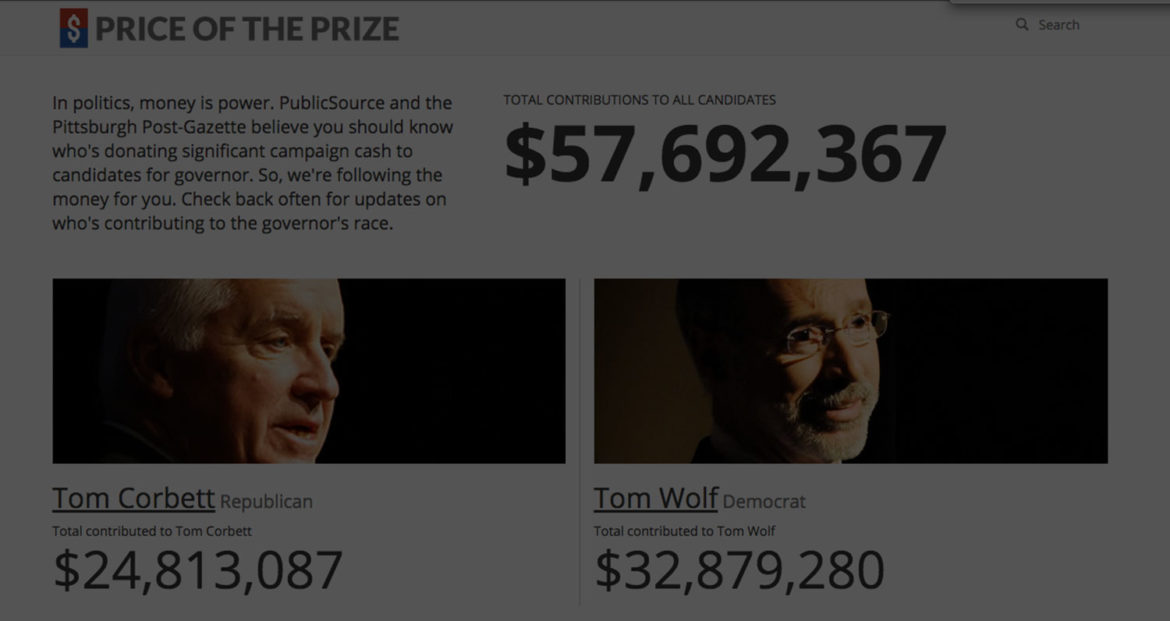 When the campaign for governor ends, the contributions and expenses don’t. As strange as it might sound, candidates can receive money after the election and a few people actually continue to give until Dec. 31.

Newly elected Gov. Tom Wolf raised $284,019 in contributions from 131 people and committees after the election. Former Gov. Tom Corbett received 96 contributions for $39,196 after he lost.

The largest single contribution after the election was a $50,000 contribution to Wolf from the Comcast Corporation & NBC Universal Political Action Committee (PAC).

Before the election, Comcast gave more than $100,000 to Corbett and then switched its support after Wolf won.

John Demming, executive director for Comcast’s financial communications, said Comcast supported the current governor in both cases, but could not elaborate further on Comcast’s political strategy.

A law firm spokesperson did not return a phone call.

After his victory in 2010, Corbett received more than $634,000 between Nov. 2 and the end of the year, so it’s not unusual that Wolf also received contributions after Election Day. In 2013 and 2014, Wolf raised $32.9 million compared to $24.8 million for Corbett. The $57.7 million raised by the two candidates combined made it the most expensive general election in Pennsylvania history.

Former Gov. Ed Rendell, a Democrat, is still the leader in raising more money than any other Pennsylvania candidate, with more than $43 million leading up to the 2002 election.

A donation to the chief of staff

On Nov. 7, just three days after celebrating an election night victory with his supporters at Utz Arena in York, Wolf’s campaign cut a $100,000 check to Katie McGinty’s campaign, his former primary opponent.

McGinty only had $26,000 in her campaign fund and was still $110,000 in debt from her failed run for governor. After losing in the primary, McGinty led Campaign for a Fresh Start, the PAC that held events across the state, among other things, to support Wolf and other Democrats.

Wolf paid off her loan because he didn’t want his chief of staff fundraising to pay off her debt from the same people who might be doing business with the state, according to a person familiar with the discussions.

“It’s examples like this that show the long reach of campaign finance and where it leaves you after an election,” said Christopher Borick, a Muhlenberg College political science professor.

For some, he said, it’s a matter of climbing out of debt while others wield greater financial power. It also is another case of contributions being diverted away from their original purpose.

“If I was a donor, I might ask, ‘Why is my money going to pay off Katie McGinty’s debt?’” he said.

The Allegheny County Democratic Party also received $10,000 from Wolf on Oct. 27, a week before the election.

What about Tom Corbett?

After the election, Tom Corbett closed down his campaign committee, making final payments to Verizon for cell phone bills and to other companies for printing costs. When all the bills were paid, Corbett transferred what was left — $150,678 — to his Friends of Tom Corbett PAC.

It now controls more than $300,000 which will be enough for Corbett to make an impact in future races.

Barley said he couldn’t pinpoint which local or state races Corbett would contribute to. He said he doesn’t anticipate the PAC becoming a big force in the state. It will leave that kind of fundraising to the Republican party.

“He’s going to use it where he can do some good,” Barley said.

In addition to the lump sum transferred from his campaign, Corbett’s PAC raised money before the November election. In October alone, Friends of Tom Corbett raised $63,250, or nearly one-sixth of the PAC’s total raised for the year.

This pales in comparison to the $3.4 million his campaign committee raised in October, but it is interesting that some donors had already shifted their priorities away from the campaign.

Like Wolf, Corbett used campaign funds to benefit other party members in the state. The Corbett campaign gave nearly $578,000 to the Republican Party of Pennsylvania, most of it in September, roughly six weeks before the election.

The campaign also made late contributions in October of $10,000 to Firearm Owners Against Crime and $5,000 to the Pro-Life PAC of Southeast Pennsylvania.

Diving into the campaign expenses

There’s a good reason to focus on campaign contributions: Who’s giving? How much? And, what, if anything, do they expect to get in return?

But campaigns also report their spending, which can generate interesting trivia such as: Where are the campaign staffs eating and sleeping?

The Wolf campaign paid Bricker’s Famous French Fries nearly $5,000 for catering on election night. They also spent nearly $1,500 on food from Panera Bread in 2014. They could’ve bought more than 200 panini sandwiches at $7 each for that.

As far as hotels, Wolf and his staffers favored Hampton Inns, spending more than $19,000. They also spent nearly $11,000 at Holiday Inn and Holiday Inn Express hotels.