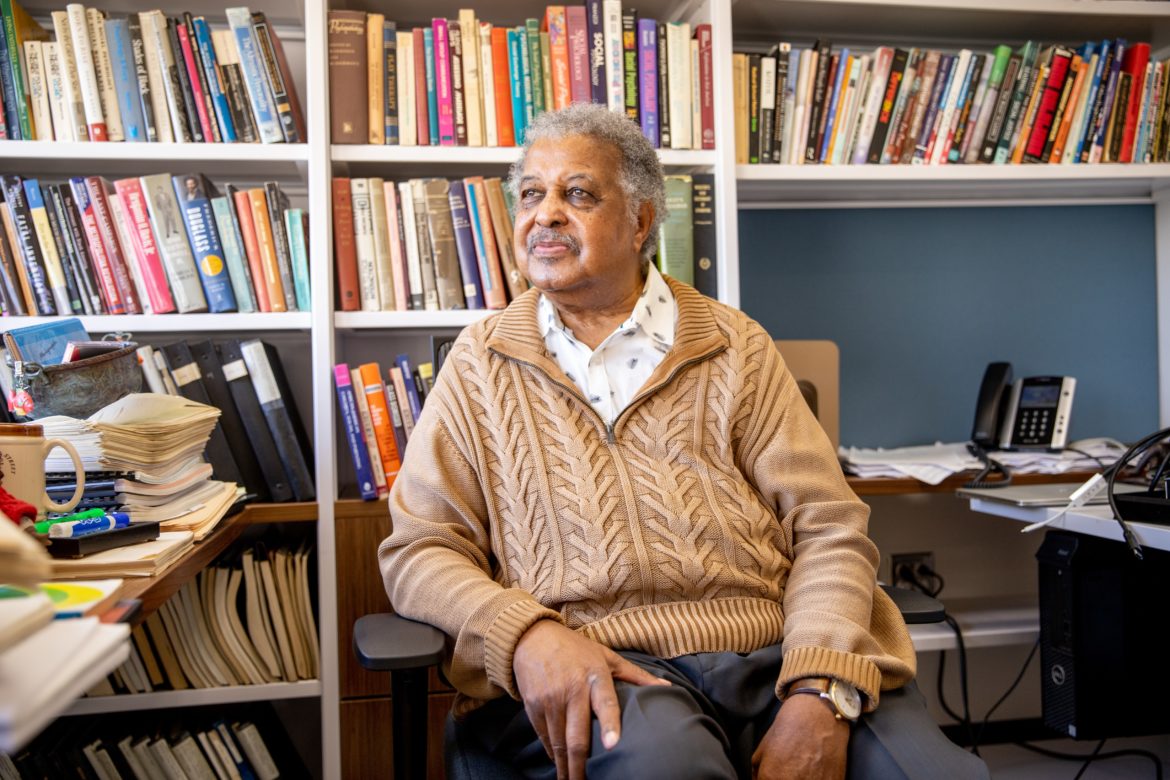 As a psychology professor at the University of Pittsburgh, Jerome Taylor had a personal mission to uplift Black students in a largely white field. (Photo by Kaycee Orwig/PublicSource)

As Black students protested to make the University of Pittsburgh more equitable, one professor saw a chance to uplift Black students. More than 50 years later, the school is still learning from his short-lived, but impactful effort.

When Jerome Taylor joined Pitt's psychology faculty in the late 1960s, he saw a clear problem. It was overwhelmingly white. And so were the students.

“They were in a terrible condition at the outset,” Taylor said. “They eventually put up some resources to make a difference in terms of that long history of drought.”

As a professor and director of the department’s clinic, he built a mentoring program using $30,000 from the university, recruiting students primarily from historically Black colleges and universities. He also hosted summer workshops to show students that he and the university were committed to supporting Black graduate students.

His efforts worked. He’d attracted Black students in a field badly in need of diversification. But success came with a new challenge: He’d recruited more students than he’d be able to mentor one-on-one.

His solution was to create a new community, bringing students together as a group to offer his insights on their work and to give them a chance to collaborate with one another.

For Black students and young faculty, mentorship offers critical support on research projects, opportunities to collaborate and network and, above that, a feeling that they are welcome in a field with longstanding barriers for Black academics.

In 2021, the ranks of tenured professors in the Pittsburgh area are still overwhelmingly white. Universities like Pitt have committed to increasing diversity, but doing so demands institutional changes, including giving Black students more of the types of supports that Taylor committed to decades ago.

Taylor’s interest in psychology began at home. Neighbors would call his mother to have her interpret dreams, and he discovered Sigmund Freud at the library. In college, one of his professors encouraged him to study clinical psychology. At Pitt, he’d do the same, mentoring students who went on to prestigious careers as professors, college vice presidents, provosts and political leaders.

Huberta Jackson-Lowman began her Ph.D. at Pitt in 1971 with an interest in racial and cultural identity and addressing racism. Without Taylor’s guidance on her dissertation, she feels her experience might have been drastically different.

“I'm sure I would have felt very lonely and felt like I was all by myself trying to do this, and the stress of the experience would have been pretty weighty,” she said.

She remembers a community of Black doctoral students who would study together, work with each other and sometimes spend Saturdays hanging out at Taylor’s home. When the discussion turned to research, Taylor would grab his chalkboard from the basement and they’d get to work.

Taylor also heard his students talk about feeling invisible in class or having their research or ideas rejected by faculty. He relied on the relationships he’d built at the school to bridge problems between those students and their instructors. Sometimes it seemed like other professors were unfairly pushing back on their research — or worse.

“It almost bordered on the line of being rejected — not only their ideas but sometimes rejecting them,” Taylor said.

Jackson-Lowman recalled being asked to re-collect research data while she was pregnant and working to finish her dissertation. A faculty member was concerned that they were not involved in earlier meetings about the data and wanted her to gather it again, despite Jackson-Lowman nearing her delivery date.

A year later, she was a mom with a Ph.D. Though Taylor did not outright say as much, Jackson-Lowman knew he defended her work.

“He didn't come and share all the struggles and the challenges that he was facing in the department trying to make a way for us and to protect us,” she explained. 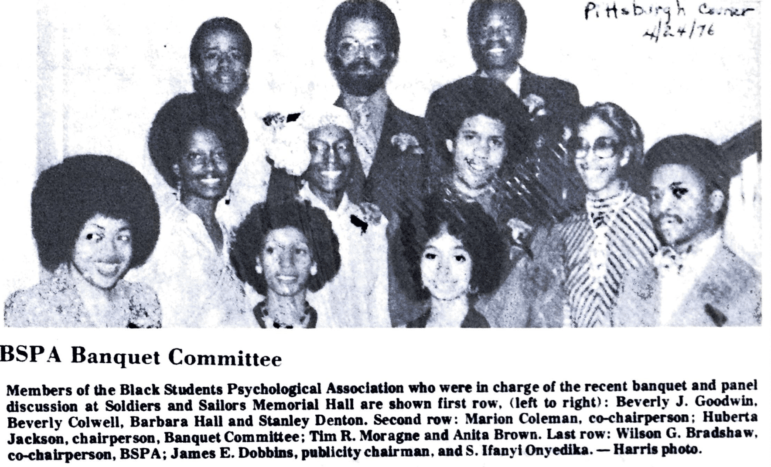 Taylor’s group mentoring model was impactful but could not overcome some challenges. After going strong in the early 1970s and mentoring more than two dozen doctoral students, the program ended by the end of the decade due to funding constraints. Taylor continued teaching, moving to the Department of Africana Studies, and the impact he had on students continued there.

As an undergraduate at Pitt in the 1990s, Oronde Sharif recalled feeling isolated by the lack of Black students. He sought out Black faculty for support.

“When I had questions, or had thoughts, or just needed clarity — it was the place to go for guidance. It felt like a place that you could call home,” Sharif said.

Sharif’s mother taught Afro-Caribbean dance at the university, and he returned to campus in 1999 to teach her class when she was diagnosed with cancer. Years later, he still teaches at Pitt, though he said he is not interested in tenure-track at Pitt after watching Black colleagues be denied those positions. He said he did not receive help or guidance in creating his syllabus and direction for his class.

“I know faculty who have left because they felt like they didn’t have support,” said Sharif, adding that Black faculty without mentors are often better off leaving.

As academia continues to struggle with diversity, Pitt took notice of Taylor’s legacy.

In 2019, Pitt’s Dietrich School of Arts and Sciences tasked department chairs to do ‘self-reflection’ by writing up reports on diversity, equity and inclusion efforts. Julie Fiez, chair of the psychology department, began with Taylor’s historical influence.

The department today faces similar issues as in 1969, Fiez said, drawing parallels between the sense of urgency expressed by Black students then and now in calling for more representation on campus. Pitt responded decades ago by investing in recruiting more Black faculty and increasing the number of Black students. Largely due to Taylor, the psychology department gained a national reputation for its recruitment of Black graduate students.

“He was the principal mentor to the large majority of the Black students that entered our department during that time, and he attained a remarkable track record,” Fiez said.

Looking back, Fiez said other universities like the University of Michigan had similar diversity initiatives that sustained the test of time. Pitt’s lost funding.

“If we had stayed with it all the way through, we would be right there with the very top departments in the country in terms of really helping to invest and grow in this area,” she said.

The department has participated in other programs like “Hot Metal Bridge” that offer fellowships to post-baccalaureate students who have an interest in graduate programs but may need more time and experience to succeed. Mentorship is also more distributed among faculty, including white professors.

After talking with Taylor, Fiez realized the value of building community.

“That’s something that we've been trying to be mindful of as we kind of reengage and reinvest and pick back up the mantle of the kind of leadership in this area that he started,” Fiez said.

Taylor still works with his former students and sees the continued need to uplift the Black community through a new initiative called Justice ACED Academy, which focuses on improving inequities that undermine Black communities.

He’s been involved in that work all along. Jackson-Lowman worked with Taylor at the Center for Family Excellence, a social services nonprofit he created to connect Pittsburgh families to city resources. It started as a partnership with the university’s psychology clinic, where Taylor was the first Black director. In the late 1980s, they both served on a mayoral commission to address Black infant mortality.

She notes the huge influence Taylor has had on her life and career. She calls him a “jegna,” an Ethiopian term used by the Association of Black Psychologists that means “a very brave person who is a protector of culture.”

“Jegna is much more than just a mentor,” she said.

“He’s been like a wise guide, someone who has been of exemplary character and has been much more than just a person who supported me in terms of helping me get through the program.”