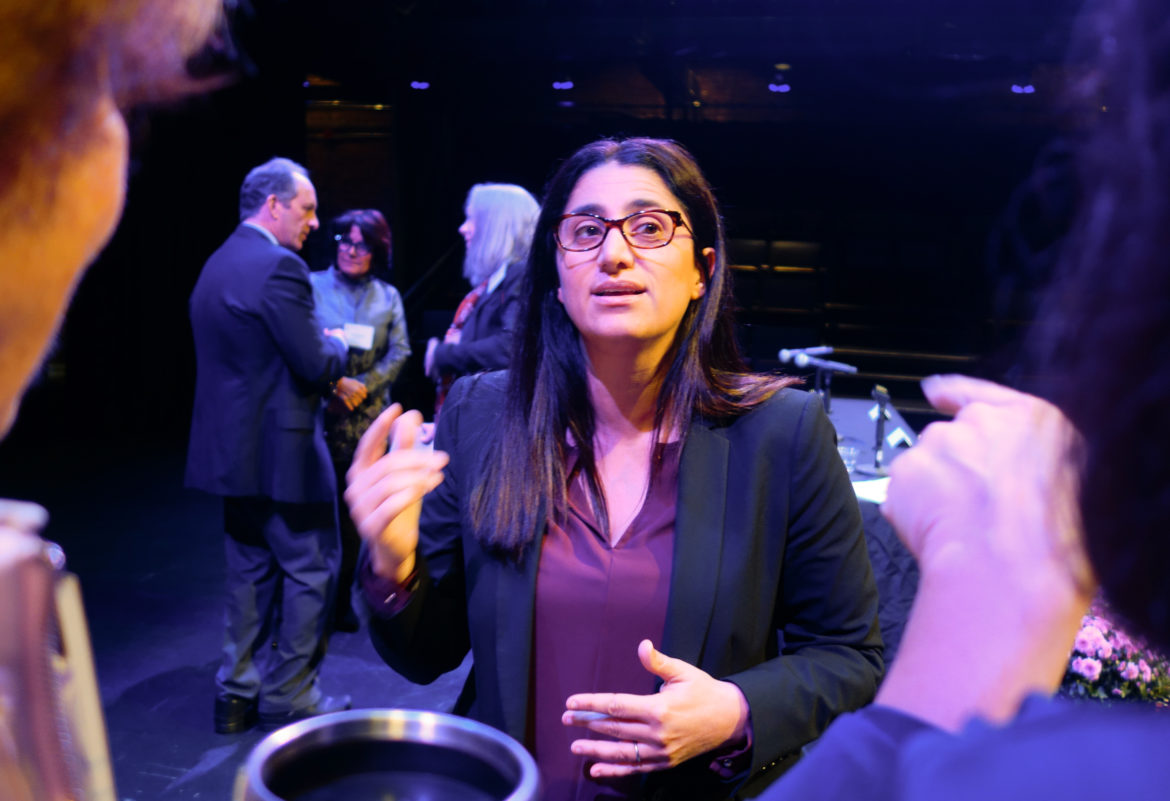 Dr. Mona Hanna-Attisha answers questions after speaking to an audience about her work exposing the lead crisis in Flint, Michigan, on Oct. 18, 2017. (Photo by Oliver Morrison/PublicSource)

Dr. Mona Hanna-Attisha, one of the pediatricians who identified lead poisoning in Flint, Michigan, doesn’t shy away from describing what happened there.

“It is well known to be a form of environmental racism,” she told a crowd of 100 at the New Hazlett Theater in the North Side of Pittsburgh on Wednesday.

Although the story is no longer receiving the attention it once did, she said, the story isn’t over in Flint. And although Flint’s situation was unique, in many ways the genesis of the lead crisis in Pittsburgh resembles Flint.

Like Pittsburgh, Flint had aging infrastructure and a diminished population that had left behind major pockets of disadvantage. Like in Pittsburgh, she said, leaders in Flint, and doctors such as herself, were not searching for lead and the symptoms of its exposure.

As a medical resident, she was taught to look for contamination from other household sources, mostly paint. She trusted that the state regulators in charge were correct. It wasn’t until a friend who worked for the U.S. Environmental Protection Agency told her to take a closer look, and after parents complained about their water, and after a local reporter kept pushing, that Dr. Hanna-Attisha became more concerned.

When she did finally test levels in 2,000 Medicaid patients, the results were alarming. “We were caught off guard,” she said.

There were some special factors in Flint that led to “the perfect storm,” she said.

Flint had the highest cost of drinking water in the nation, she said, which led families to ration water rather than flush it and be careful about it, even as the water changed color.

The city changed water sources from a lake to a river as a cost-cutting measure. This shouldn’t have been a problem on its own but because the water was more corrosive and wasn’t treated correctly, lead entered the drinking water.

And 12 people died from Legionnaires disease in Flint, another result of its dirty water. This led to officials being held accountable and even some of them were charged with involuntary manslaughter.

Hanna-Attisha, who was in Pittsburgh to receive the Heinz Award for Public Policy, spoke along with Dr. Keith Somers, a pediatrician with Children’s Community Pediatrics, Catherine Lobaugh, an executive with Allegheny Intermediate, and Shannah Tharp-Gilliam.

Tharp-Gilliam is the director of research at Homewood Children’s Village. Homewood is a predominantly black, low-income community in Pittsburgh’s East End.

Tharp-Gilliam told the audience in a panel following Hanna-Attisha’s lecture that her organization has been prioritizing how to help children, and their families, deal with asthma. But that focus is in large part because they don’t have good information on what kind of an impact lead is having on their children.

She knows that some of their programs are not having the impact they thought they would, and she wonders whether lead is one of those factors.

"Is there something else going on?” Tharp-Gilliam asked. (From left to right) Dr. Keith Somers, a pediatrician with Children’s Community Pediatrics; Catherine Lobaugh, an executive with Allegheny Intermediate; and Shannah Tharp-Gilliam, the director of research at Homewood Children’s Village, speak on a panel about the problem with lead in Pittsburgh's water on Oct. 18, 2017, at the New Hazlett Theater. (Photo by Oliver Morrison/PublicSource)

When the Homewood Children’s Village tried to build an outdoor science lab, she said, an assessment discovered lead levels 10 times higher than was acceptable. She was told their children shouldn’t even be walking there. She suspects many of these same children’s homes may have a lead problem but won’t find out until it’s too late.

"If you were to see the conditions of some of these homes in which people are living, it would break your heart,” she said.

She hopes when the city starts mandating blood lead tests in children ages 1 to 2 next year that she will have a better answer to the question: How big of a problem is lead in Homewood’s water?

One of the issues in Pittsburgh and across the country, Hanna-Attisha said, is that investigators are finding lead in the water but not identifying it as a major cause of high levels of lead in children.

"Kids could have many sources [of contamination], and they are all a problem and we need to take them very seriously,” she said.

In part, that’s a problem with testing, she said.

Half of the lead in blood disappears in 28 days, which means if children aren’t tested at the height of their exposure, it may not show their true risk. The tests can vary depending on many factors, even the time of day it’s being conducted, she said.

“It’s like drinking through a lead straw; you never know when a chip is going to come off,” she said.

Besides, she said, if we know there is a risk of contamination now, we shouldn’t wait until after it has already caused health problems.

How did Flint respond? How should Pittsburgh?

"When a pediatrician hears the word lead,” Hanna-Attisha said, "it’s kind of a freakout moment because we know what lead does." Although the current amount of lead federally allowed in water is 15 parts per billion, the health recommendation is 1 ppb or preferably zero, Dr. Mona Hanna-Attisha told a Pittsburgh crowd Wednesday. (Photo by Oliver Morrison/PublicSource)

So Flint isn’t just studying the issue but has taken a holistic approach to addressing the harm, she said. Lead is a known neurotoxin that can lead to developmental issues in children. It is also especially dangerous to pregnant women because lead exposure can affect the fetus.

In a city that used to have only one book for every 300 children, now parents receive books at birth and one book every month. The city built two new early child care centers for disadvantaged families. There used to be one school nurse, and now there are 10. Children in the schools also start the day with yoga and mindfulness.

The city has replaced 5,000 leadpipes, but 20,000 more still need to be replaced, she said. Many residents are still drinking bottled water.

So Hanna-Attisha, and a few other local experts who spoke on a panel after her, said Pittsburghers can act now to help their children: Mop the floor to soak up the dust. Have children take off their shoes in the house. Make them wash their hands before eating. Don’t buy certain foreign toys and products where lead may still be used.

The importance of nutrition and diet as a preventative measure were also talked about in more depth. If a child eats more foods high in calcium and minerals such as zinc, Hanna-Attisha said, there is less likelihood that the body will absorb lead in the first place. Once bones absorb lead, a diet high in calcium and minerals makes it less likely the lead will be released into the body.

In addition to leafy vegetables and some fruits, the good foods includes nuts and beans. If they eat more fats, she said, the body could absorb more lead.

Hanna-Attisha said she tells her clients to eat avocados and kale, and because she built her clinic on top of a farmer’s market, she can tell them where to go downstairs to find it.

So people need to be educated on what they can do, she said, but not blamed. In the past, she said, the lead industry attacked parents, often in racially coded language, for being unteachable. So although education is a necessary short-term strategy to reduce exposure, she said it isn’t a substitute for removing the sources of contamination.

"Kids will put their hands in their mouth, they are curious, we can’t stop them,” she said. "So we have to truly eliminate as much as we can."