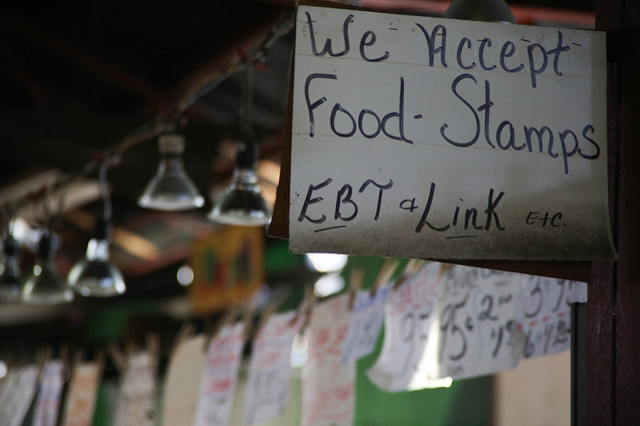 A store that accepts food stamps via EBT

Pennsylvania taxpayers paid nearly $700,000 in public benefits to 2,324 people who had already died. And that was only what auditors found in one year between July 2013 and June 2014.

Of the 30 cases studied in-depth by the auditor general’s office, there were 11 times when the agency did nothing within 60 days of receiving a death notice. In four of those 11 cases, it took more than six months for the agency to act, according to an audit released Thursday by Pennsylvania Auditor General Eugene DePasquale.

His office was reviewing the state’s Electronic Benefits Transfer [EBT] program, which is a debit card that can be loaded with money from federal benefit programs. Common benefit programs include Temporary Assistance for Needy Families, or welfare; Supplemental Nutrition Assistance Program, also known as food stamps; home heating assistance and other programs.

Roughly $2.7 billion is spent on food stamp benefits and $480 million on welfare payments each year in Pennsylvania.

The auditor general’s office has been regularly reviewing public benefit programs for fraud since 2009.

In response to the audit, DHS said the agency has taken several steps to improve its operations under Gov. Tom Wolf’s administration.

On Aug. 24, the department implemented a new policy to immediately review and terminate benefits when it receives a death notification in cases where the final recipient in a household has died. It also disputed that $700,000 had been dispersed to dead people. It put the figure closer to $330,000, but did not provide evidence to support those calculations.

The auditors also examined more than $70 million in benefits that gets spent outside Pennsylvania every year. Roughly 75 percent of that money was spent in states adjacent to Pennsylvania, but more curious were the more than $14 million spent in Florida and nearly $6 million spent in North Carolina from 2012 to 2015. While the money is allowed to be spent in all 50 states, it should raise a red flag with regulators when someone is spending the vast majority of their benefits in another state.

The auditors said the department’s ability to systematically detect potential cases of fraud was limited by its software. DHS began monitoring out-of-state spending in 2012, at the recommendation of the auditor general’s office. It’s been successful. The department identified more than 15,000 inappropriate accounts and prevented $22 million of incorrect payments from 2012 to 2015.

While the auditor’s office suggested more ways fraud could be identified, the agency said it “believes that its current methodology is appropriate and adequate.”

When fraud is detected, DHS refers the case to the Pennsylvania Office of the Inspector General [OIG] to investigate. At least, that’s how it’s supposed to work.

Auditors found several cases where that didn’t happen. For instance, a recipient died in July 2013, but someone filed a renewal application in October. The application was renewed, despite the caseworker trying to call the person on the phone and never getting through. When the caseworker did receive notice of the person’s death, the case was never sent to OIG to investigate.

The auditor general found DHS also has lax regulations regarding authorized representatives picking up benefit cards on behalf of recipients who have physical or mental disabilities. This option — used by about 5,600 people in Pennsylvania — doesn’t require representatives to sign any documents about appropriate card usage.

Pennsylvania makes authorized representatives less accountable than the recipients when it’s actually the reverse in several states, including Michigan and California.

In a press release, DHS noted that it recently increased the accuracy of its food stamp payments to 98.2 percent, which is above the national average.