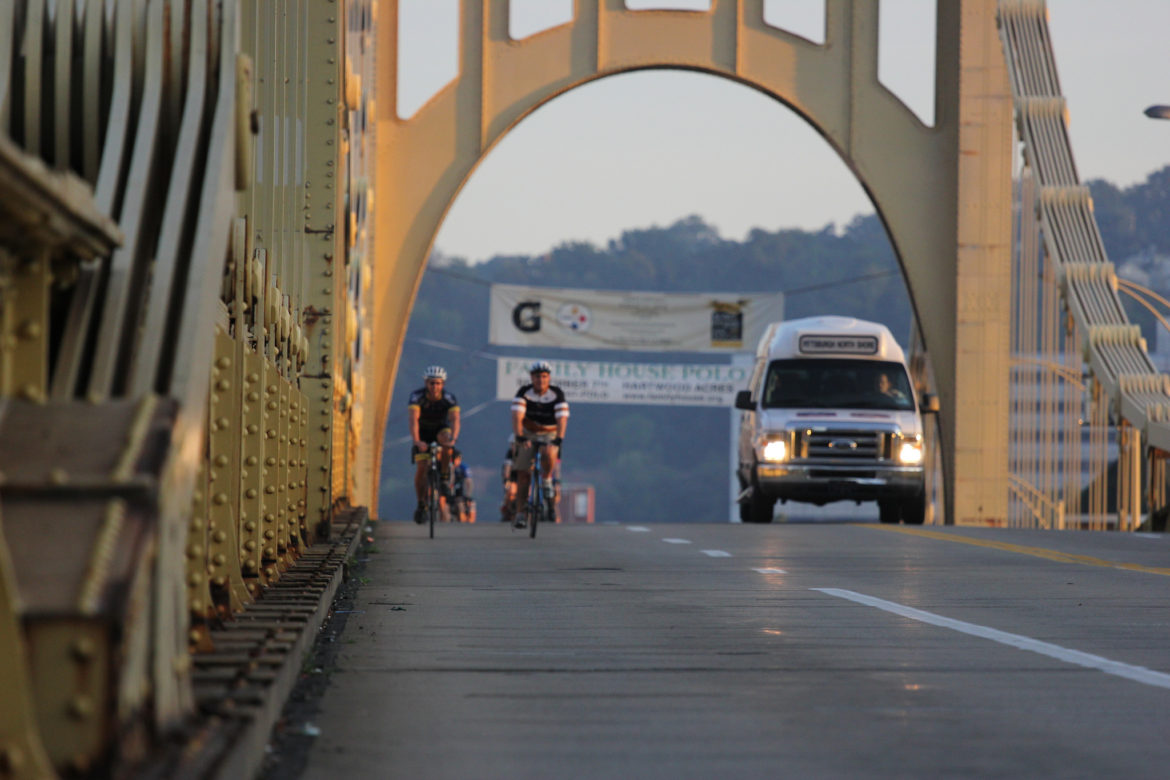 On a July afternoon in New Orleans last year, Philip Geeck was riding his bicycle in a marked bike lane on a busy street. Approaching an intersection, he came up alongside a tractor-trailer truck hauling a tank of chemicals. Geeck, 52, was at the 18-wheeler’s midpoint when suddenly, without signaling, the truck began to turn right, witnesses say.

Victor Pizarro was driving nearby and watched in horror. He saw a look of confusion on Geeck’s face as the trailer came toward him. Geeck, an experienced cyclist, tried to get away from the truck but couldn’t. First, his wheel went beneath the semi’s enormous rolling tires, then his foot, then his entire body was dragged under.

“It just kind of sucked him in,” Pizarro said in an interview.

Geeck’s head was crushed and part of his leg was severed. He died at the scene; the truck driver was not cited by police.

Heavy trucks like 18-wheelers, box trucks, garbage and dump trucks, make up a fraction of the vehicles on the road, but are involved in a disproportionate share of accidents that kill bicyclists, according to federal data. The problem is worst in cities, where most bike fatalities occur.

Collisions that killed bicyclists made up slightly more than 1 percent of all motoring fatalities in the state, but trucks were involved in 46 percent of them, the federal data shows.

Some safety advocates say the problem could get worse: The rise of e-commerce is bringing more trucks into urban neighborhoods at the same time that cities are encouraging cycling through bike sharing programs, bike lanes and other infrastructure improvements.

Pittsburgh launched a bicycle sharing program on May 31, and the city has new bike lanes downtown, as well as on the bridges that connect downtown with urban neighborhoods.

“We need to provide dedicated bike infrastructure and education for those that are interested in biking, but concerned for their safety. In other cities, this group has represented as much as 60 percent of the population,” Kristin Saunders, the city’s bicycle and pedestrian coordinator, wrote in an email.

“It could be a collision course,” said Alex Epstein an engineer at the John A. Volpe National Transportation Systems Center, a federal research institution in Cambridge, Mass. “You have more trucks in cities, more urban freight, at the same time that you have more bicycling and walking.”

Safety advocates would like to see a range of reforms: Better driver training, restrictions on the size of trucks allowed on busy thoroughfares, better-designed streets, more federal funds for bike and pedestrian safety and tougher penalties for drivers who kill cyclists and pedestrians.

Meanwhile, there’s also a small but growing movement in U.S. cities to adopt a simple truck retrofit — one already in use in much of the world — that could immediately save lives.

In about half of the fatal bike and truck accidents, the person who is killed first makes impact with the side of the vehicle, according to the Volpe center, typically because the vehicle is turning.

But truck side guards — a panel or set of metal bars running between the two sets of wheels — can keep people from falling under the wheels. Instead, they bounce off the side of the truck.

Side guards are a line of last defense for a cyclist or pedestrian, one some liken to a seat belt. “The intention is to take something that would be a fatality and turn it into an injury,” said Kris Carter, the director of programming in the Mayor’s Office of New Urban Mechanics in Boston, where an ordinance requiring side guards on many large city-owned and city-contracted trucks took effect in May.

PublicSource could not identify any Pennsylvania city discussing such a move.

Bike Pittsburgh, a nonprofit advocacy group for safe biking, said truck side guards could be included in its Vision Zero campaign, which the group wants the city to adopt to move toward reducing pedestrian and bicyclist crashes by 50 percent and eliminating fatalities by 2020.

“We need to make a better plan to stop people from dying,” said Eric Boerer, the advocacy director at Bike Pittsburgh.

The state took other action to protect bicyclists in 2012: A new law made it illegal for a motorist to take a right turn in the path of a cyclist. The law also required motorists to give cyclists a 4-foot buffer when passing.

Federal regulators do not require the use of truck side guards, but local efforts are growing. New York City is equipping about 200 city trucks with guards and recently passed a law that will require them on most large city trucks and privately owned garbage trucks by 2024. Washington, D.C., and Portland, Ore., also require them on many city-owned trucks.

The American Trucking Associations, the industry’s national trade group, has no official position on side guards but is “always concerned about truck safety,” said Ted Scott, the group’s director of engineering.

Most of the research on side guards’ safety benefits has come from Europe, Scott said, where bicycling is much more common. He said more data needs to be collected in the U.S. to see how effective they are. “Maybe it mitigates the damage. Maybe it just kills you differently,” he said. “We don’t know.”

Side guards save lives

The number of Americans walking has inched up, but those who commute by bike rose 62 percent between 2000 and 2013, according to an evaluation of census data by the League of American Bicyclists.

Pittsburgh Mayor Bill Peduto remarked on the prevalence of non-motoring commuters in his city at the Ontario Bike Summit in April 2014.

“Pittsburgh is a growing, commuter-friendly city where 30 percent of people walk, bike or take public transit to work — that’s the eighth-highest percentage among large American cities.”

Fatality figures give an incomplete picture because safety agencies don’t collect data on how many accidents occur per mile walked or biked.

“Crash stat reporting is abysmal,” Boerer, of Bike Pittsburgh, said. “Someone could go to the hospital four days later and die, and it’s not a fatality. They don’t even take reports on crashes that don’t involve a tow truck or ambulance. If someone walks to the hospital, that doesn’t count.”

From national data that is available, cyclist deaths hovered between 623 and 786 each year between 2004 and 2013, according to NHTSA.

For the same time period in Pennsylvania, there were between nine and 21 cyclist deaths each year, with a total of 149, according to PennDOT data.

Scott said he didn’t know of any training for truck drivers that specifically focuses on pedestrian and bicyclist safety. However, he said, drivers of large trucks have to earn commercial drivers’ licenses, which require learning how make turns safely.

He also said the onus isn’t only on truckers: “The other part of this question is what sort of training is being given to the bicyclist.”

Statistics from the United Kingdom suggest putting side guards on trucks could reduce bicyclist and pedestrian fatalities. In the 1980s, the U.K. adopted a national policy requiring side guards on all large trucks. Fatal side-impact collisions between bicyclists and trucks dropped 61 percent. The side guards are mandatory in the European Union, Brazil, Japan and China, according to the Volpe center.

The side guards used in Boston cost about $1,200 to $1,800 each, according to city figures, though the U.S. Department of Transportation estimates the price could be less than $1,000, depending on the design. And, there’s a even a positive side effect: If properly designed, side guards can increase fuel efficiency because they reduce air drag.

While safety advocates are glad to see cities adopting side guards, the approach is piecemeal. Even the most far-reaching law — Boston’s — will reach only about 230 trucks, at most, in its first year, according to the mayor’s office. And when New York City’s law is fully in place, eight years from now, most privately owned trucks will be exempt.

Some bicycle advocates call for a federal mandate, though that may a long time coming. In 2013 and 2014, the National Transportation Safety Board, which investigates accidents and makes safety recommendations, but has no regulatory power, recommended that side guards be required on large trucks. The aim was to keep passenger vehicles from sliding under trucks, but it also would protect bicyclists and pedestrians.

To date, though, federal regulators have taken no action on the recommendations.

Even without a federal mandate, trucking companies should step up, said Valerie Yarashus, a Boston lawyer who is part of a truck-safety task force at the American Association for Justice, a trial lawyers group.

Scott, of the trucking industry trade group, said if convincing data emerges from the cities experimenting with side guards, the technology will likely be adopted.

And, as the evidence mounts that these guards save lives, Yarashus says it’s increasingly difficult to believe that trucking companies don’t know about their benefits.

“They have an opportunity now to see what’s going on in the rest of the world and start taking action in the U.S. to save lives before somebody mandates that they need to,” she said.

PublicSource intern Stephanie Roman contributed to this report. She can be reached at sroman@publicsource.org.

This story was reported by FairWarning (www.fairwarning.org), a nonprofit news organization based in Los Angeles that focuses on public health, safety and environmental issues. Both FairWarning and PublicSource are members of the Institute for Nonprofit News.