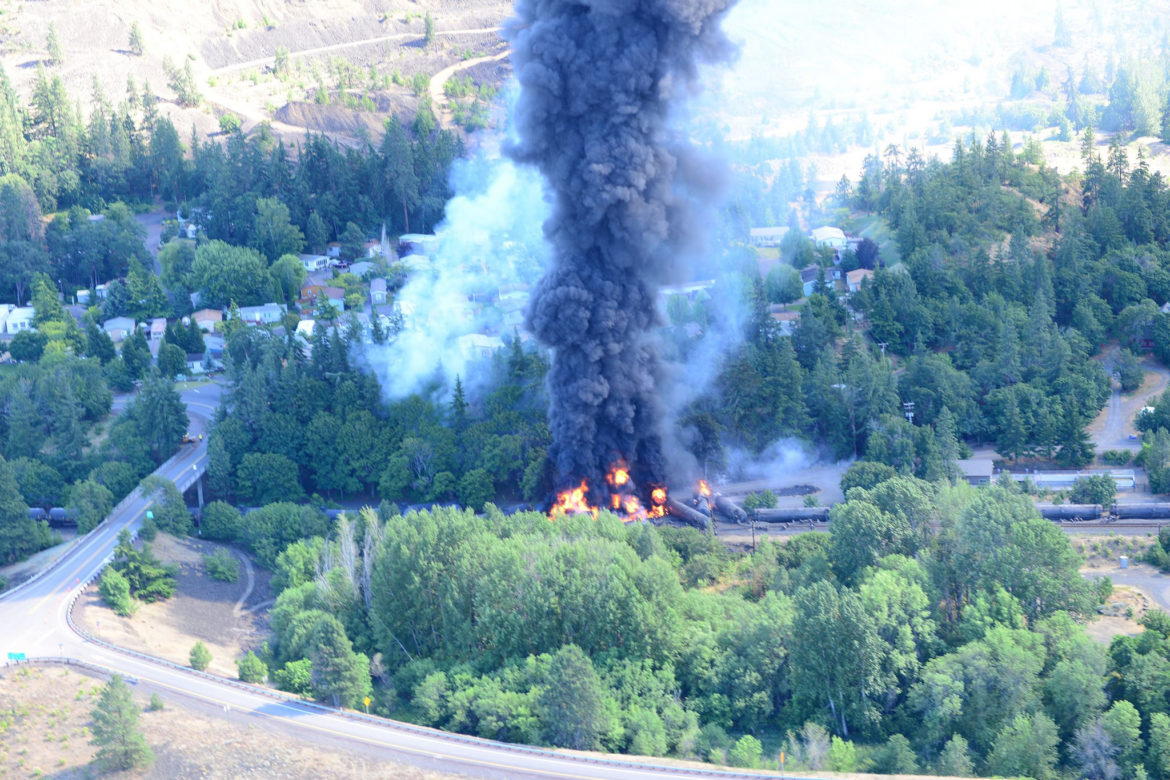 The United States almost made it a full six months into the year without a crude oil train crash.

But that record was reset last week when 16 cars on a 96-car Union Pacific train veered off the tracks on June 3 in Mosier, a small Oregon town with a population of about 400. Four cars caught on fire and leaked 42,000 gallons of Bakken crude oil hauled from North Dakota’s shale fields.

Oil trains travel weekly through Pennsylvania towns—including Pittsburgh and Philadelphia. Some count the state lucky because we’ve only experienced minor derailments so far, including an incident in 2014 when seven CSX train cars hung from a bridge over the Schuylkill River in Philadelphia. No oil was spilled, and there were no injuries.

There were also no injuries in the Oregon crash, but about 10,000 gallons of oil had to be recovered from the town’s wastewater system and hundreds of people were kept from their homes for days, according to The Oregonian.

Check out this interview the paper did with Jim Appleton, the fire chief in Mosier, who responded to the fire. For a long time he maintained that shipping oil through his state was safe, but he changed his tune after his experience fighting the train fire. Here’s an excerpt from another interview he did with Oregon Public Broadcasting:

“I hope that this becomes death knell for this mode of shipping this cargo. I think it’s insane,” he said. “I’ve been very hesitant to take a side up to now, but with this incident, and with all due respect to the wonderful people that I’ve met at Union Pacific, shareholder value doesn’t outweigh the lives and happiness of our community.”

Since the crash last week, Oregon’s two Democratic U.S. senators have introduced a bill that would help local communities get trains rerouted away from populated areas and conduct more rail inspections.

[Sen. Ron Wyden] said the wreck could have been worse if the train had been moving faster or if it had derailed in a river or in the suburbs of Portland.

"This crash has left Oregonians wondering what unlucky would have looked like. I can tell you, it doesn't take a lot of imagination,” he said.

“What people in small communities in Oregon really want to know and what they deserve to know is what happens next. What is Congress going to do to start fixing the problem?”

The Oregon crash is just the latest in a series of oil train derailments over the last three years. (There were at least 7 derailments involving crude oil in 2015.)

The railroad industry maintains that 99.99% of crude oil shipments make it to their destination safely and that derailments are rare.

Because a dip in oil prices has driven down production, not as much crude oil is currently being moved by rail, according to recent U.S. Energy Information Administration estimates. But the Oregon crash proves that there’s still a danger of trains going off the tracks.

Last year, PublicSource looked at 2015 routes through Pennsylvania and determined that 1.5 million residents live within a half-mile of tracks used to haul crude oil, which is the federally recommended evacuation zone for oil tank car fires.

Since our story published, members of the state Senate adopted a resolution that included a  request for additional federal funds for training emergency responders. So far, no federal agency has responded to that request, Nolan Ritchie, assistant executive director of the Pennsylvania Senate Transportation Committee, told PublicSource by email.

Shortly after taking office last year, Gov. Tom Wolf commissioned a rail safety expert to determine how to lower the risk of an oil train derailment in the state.

"Pennsylvania sees some of the largest volume of Bakken crude oil transportation by rail in the United States and the potential for disaster is too great to ignore," said Jeffrey Sheridan, the governor's spokesman. "The governor will continue to take steps to ensure the safety of Pennsylvania’s citizens."

Sheridan sent this email to PublicSource outlining steps the governor has taken to address crude-by-rail safety, including conducting emergency response exercises and meeting with train officials.

Crude-by-rail is mainly regulated by the federal government, which rolled out a package of rules last year that included phasing out older tank cars and requiring enhanced braking systems.