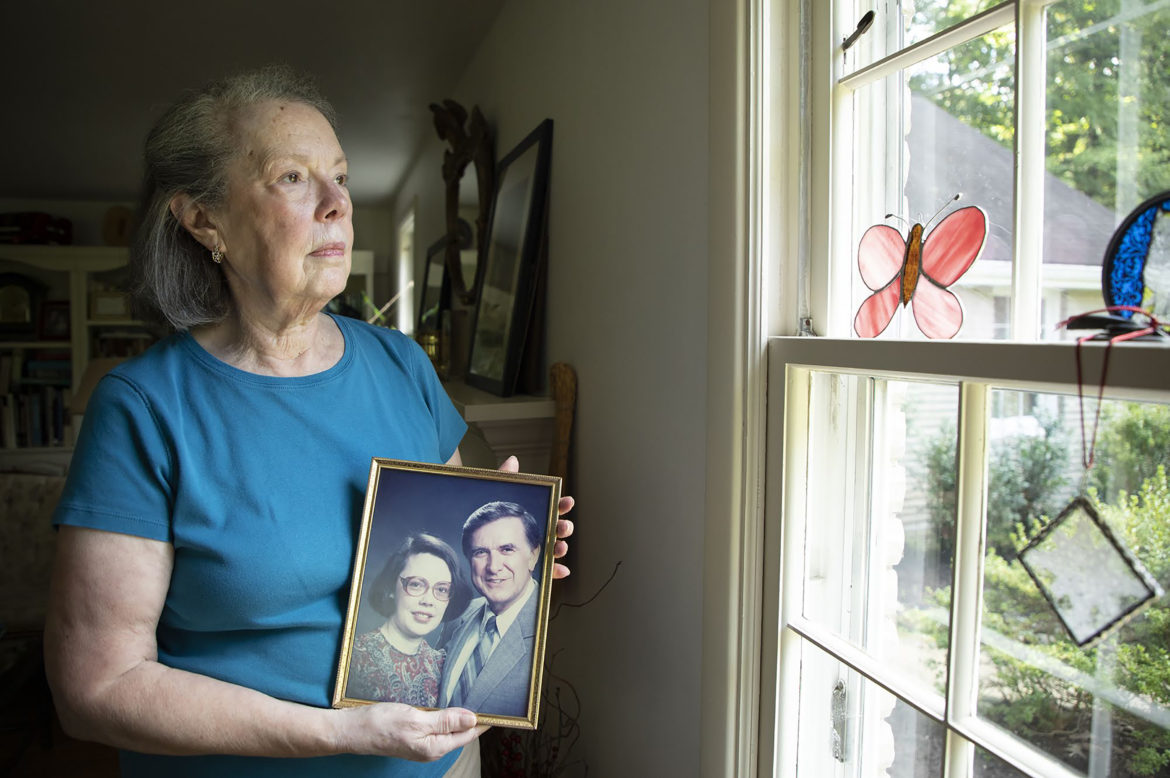 Sarah Wood holds a framed photo of her and her late husband, Charlie, at her home located in Export, Pa. The couple bought the house in 1988 and raised their daughter there. (Photo by Kat Procyk/PublicSource)

My husband, Charlie, was diagnosed with ALS in January 1995. ALS, or amyotrophic lateral sclerosis (Lou Gehrig’s disease) is a progressive neurological disease in which motor neurons die, leaving the voluntary muscles helpless. Eventually, he wouldn’t be able to scratch an itch, turn his head, brush his teeth or even go to the toilet without help. He would no longer be able to breathe. He would be locked in, his mind still sharp, but unable to speak.

We never had a break in this constantly changing landscape. The realization that he was dying, piece by piece, was horrible, and there was nothing anyone could do about it.

Charlie’s legs were affected first. He needed one cane, then two, then a walker. Finally, he needed a scooter to get around. We worked together at the University of Pittsburgh, so I was able to help him throughout the day.

I had to disassemble and load the scooter into the car, then reassemble it at work. Then, at the end of the day, I would repeat the process in reverse so he could use the scooter at home. The Department of Biological Sciences, where he was a professor of microbiology, assigned him a convenient parking space, but it didn’t make the scooter pieces any lighter. 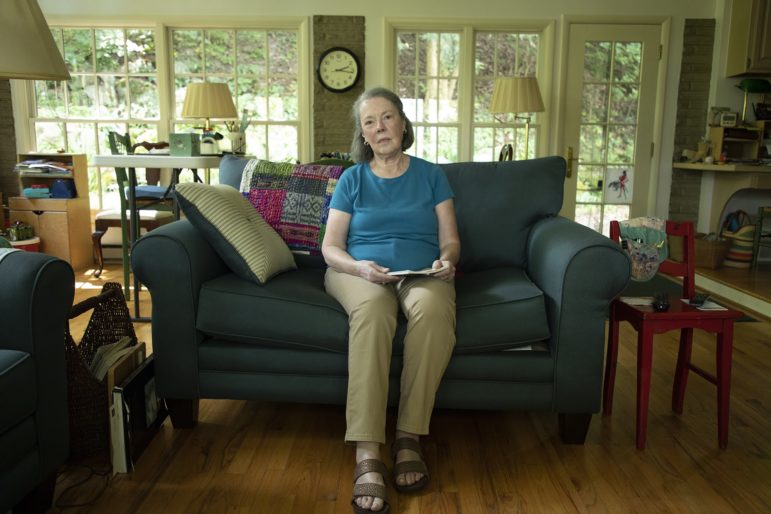 Sarah Wood's husband, Charlie, died due to amyotrophic lateral sclerosis (ALS) in October 1997. Wood pointed out scratches on the floor from Charlie’s wheelchair and scooter. (Photo by Kat Procyk/PublicSource)

We did not have a sidewalk to the ground-level back door at our house. I put plywood over the rough ground for Charlie to drive his scooter over. He would drive onto one sheet, then wait for me to pick up the other sheet and move it ahead of him. We repeated this until he made it to the door. Wrangling 4x8 sheets of plywood was a real workout. As the weather warmed up, I would get hot and sweaty. My hair would fly into my face and stick to my skin, making me want to scream in irritation.

Just before Charlie’s diagnosis, we had won a weekend trip to a hotel in rural Pennsylvania, all expenses paid. We could hardly remember how excited we had been to win at our daughter Katie’s school fundraiser. She was 11 and did not yet know about the ALS diagnosis, only that Dad was having trouble walking. In the midst of all this aggravation, the prospect of a weekend getaway began to look better and better. But could the old historic building accommodate the scooter? Could Charlie and I manage if we went? Would we have to give up the prize?

I called the hotel to ask whether they had handicap-accessible rooms, explaining his mobility issues. No problem, they said. They had an accessible room. We made a reservation for a weekend in May. When we arrived, we discovered that the hotel’s idea of “handicap-accessible” consisted of a board laid against the threshold, to allow the scooter to roll into the room.

The doorway was wide enough, but the chairs were low, the bed was low, the toilet was low. No problem transferring down, but getting Charlie up was a big problem. He was 6-foot-4 and still weighed close to 250 pounds. His weight loss came later, as he lost muscle mass. I could use my 5-foot-10 frame as leverage to help him up, and he still had strength in his arms to help. It wouldn’t be impossible, although not as comfortable as home.

By this time, we’d had a long, hard day. Charlie wanted nothing more than a hot bath and clean clothes. Then we could go to dinner at the hotel, have a relaxing drink and unwind. Charlie could still feed himself and swallow with no problems. The choking episodes and feeding tube came later. Right now, our problem was the old-fashioned, clawfoot, high-sided bathtub with no shower head or sprayer. 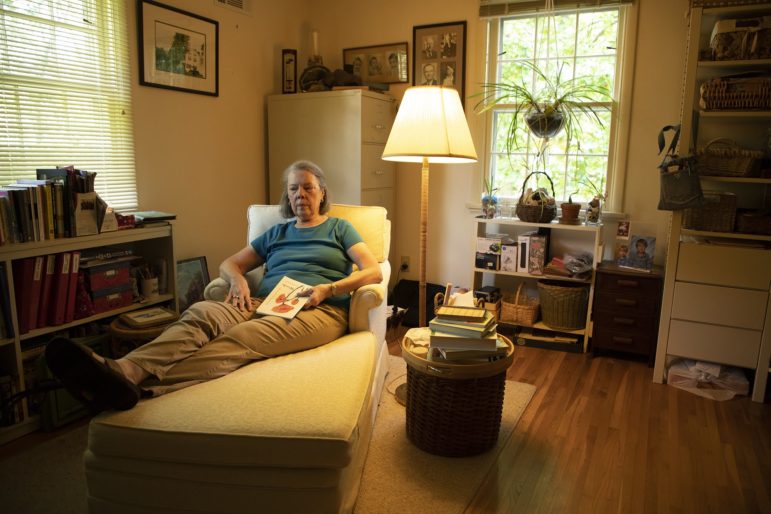 Sarah Wood in her study, which she primarily uses to write, read and study genealogy. (Photo by Kat Procyk/PublicSource)

“I have an idea,” I said. “We passed a store about a mile back. They had plastic lawn chairs outside, the kind Pittsburghers use to reserve parking places. I think one would fit into this tub. You could transfer from your scooter onto the chair. We could wash you, I can rinse you off with a pitcher of water and dry you. Then you can transfer back onto your scooter.”

He agreed to this plan, so I got back into the car, drove to the store and bought a chair. I brought it back to our room and took it inside.

“See,” I said to Charlie. “It fits into the tub just fine. Let’s get your clothes off and do this.”

Charlie parked his scooter close to the edge of the tub. I took off his clothes and lifted his legs over the side of the tub as he braced himself. We got him into the chair and I began to run the water.

“This is working out pretty well,” I said with satisfaction. “This lawn chair was a great idea.” I poured some warm water over him, and handed him a soapy washcloth. He washed his face and arms, sighing with pleasure. I washed his legs and feet, then it was time to scrub his back.

“Sit up straight,” I said. “I’m having trouble reaching your back.”

But he was definitely lower. I looked down and saw with horror what was happening. The back legs of the chair were buckling under Charlie’s weight, sliding down the curve of the tub. It was not a quick fall, just a gradual inexorable slide.

Charlie was soon flat on his back, chair underneath him, in the bottom of the tub. He was not in any danger, but now what? I looked again, trying to see a solution to this crisis. What I saw was this large, hairy, naked man, soapy all over, legs up in the air, in the bottom of this old tub. 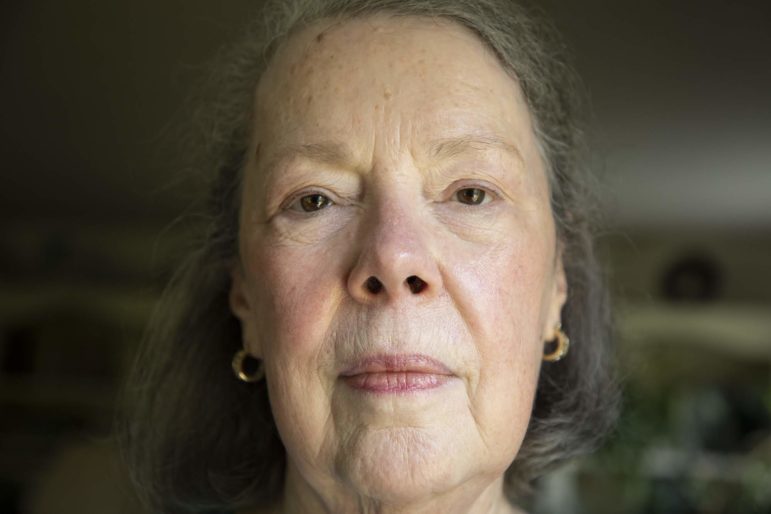 Sarah Wood stands for a portrait in the living room of her home. (Photo by Kat Procyk/PublicSource)

I started to laugh. I couldn’t help it. I had no idea how I would get him out of there, but in the meantime, this was the funniest thing I had seen in a long time. I had not laughed in a long time, either. There aren’t many laughs dealing with ALS.

Then Charlie began to laugh. Soon we were semi-hysterical, weak with laughter and the release of tension.

“Sarah,” Charlie said, still laughing and gasping for breath. “Don’t you ever dare tell anyone about this.”

“I promise,” I said, laughing.

And here I am, breaking that promise. I think he would have loved telling this story himself.

Sarah W. Wood retired as a microbiologist after 40 years in biomedical research. She served on the board of the ALS Association for 18 years. She has four children and three grandchildren. Sarah has published two books: “Mom’s Best,” a family cookbook-memoir, and “Words: It’s Hard to Pick Just One,” a collection of essays. She is a member of the Trafford Writers Workshop and can be reached at swood1958@gmail.com.