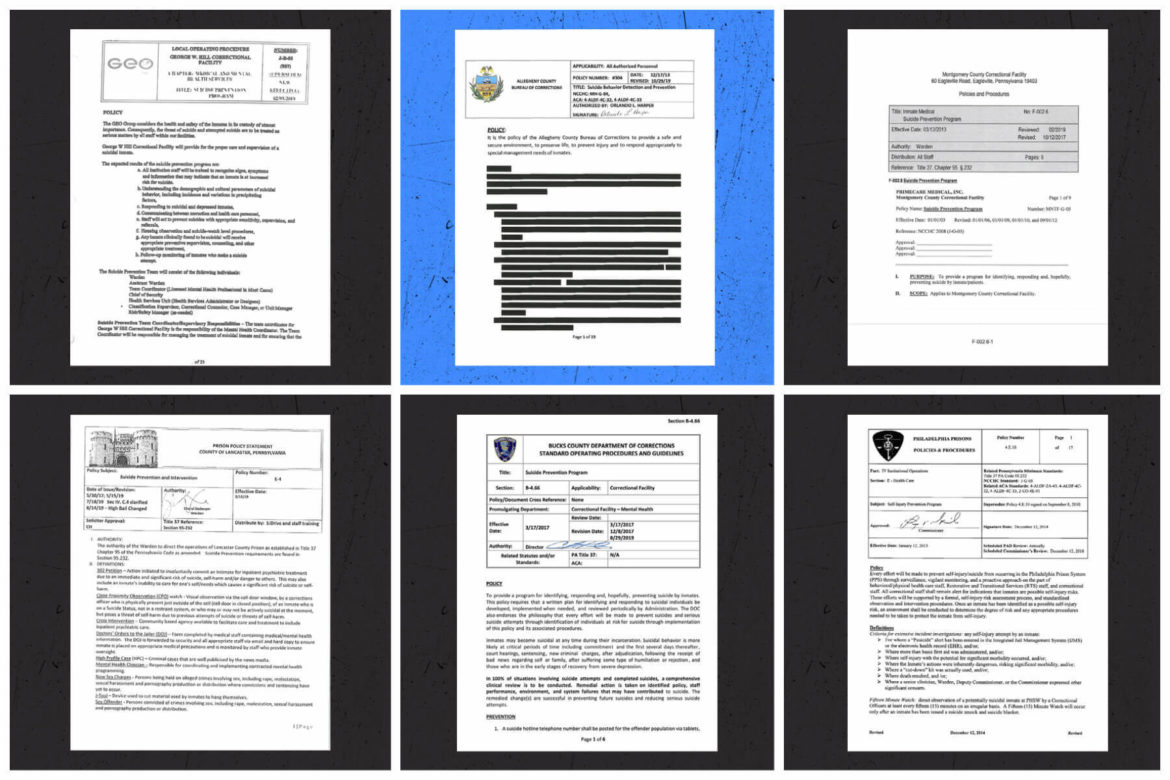 Editor’s note: This story was produced for Sunshine Week, an annual, nationwide celebration of government transparency and access to information taking place March 14-20. PublicSource frequently uses the Right-to-Know law, as it did in this story, and encounters varying degrees of transparency by Pennsylvania’s public agencies.

To better understand how incarcerated people are cared for, PublicSource sought all Allegheny County Jail policies related to mental health, suicide prevention, administration of medications and accommodations for people with disabilities through a public records request in September.

Of the six policies the county provided, five were almost entirely redacted with thick black lines, disclosing only the title and the policy’s first few sentences. The county justified the redactions by stating in an accompanying letter that the information “would be reasonably likely to result in a substantial and demonstrable risk of physical harm to or the personal security of an individual.”

PublicSource appealed the redactions to the Pennsylvania Office of Open Records; the appeal was denied. But the five other most populated counties in the state provided similar policies, either in full or in part, providing insight into exactly the type of information withheld locally.

Correctional experts PublicSource spoke to described Allegheny County’s redactions, which were made by Warden Orlando Harper, as outside the norm and harmful to transparency.

“The fact that other jurisdictions are far more transparent about their policies gives lie to any claim that what’s in Allegheny’s policy is somehow a risk to security and safety in the institution,” said Michele Deitch, an attorney and senior lecturer at the University of Texas at Austin who researches correctional oversight throughout the country.

Gerard Bryant, director of counseling and adjunct professor of psychology at John Jay College of Criminal Justice, said the public should have access to all of the policies in full. Withholding the information can actually be more dangerous, said Bryant, who has 22 years of experience in the Federal Bureau of Prisons as an associate warden and chief psychologist. “Why would you want to make this a confidential document… when you’re trying to reduce suicides?” he said of the suicide prevention policy. “Bottom line is suicide is everybody’s business, and this should be transparent for everybody.”

Could transparency be harmful?

In a six-page affidavit to justify the redactions, Harper stated that knowledge of the policies “could be used to interfere with the persons who carry out the duties defined in the policies, thereby putting inmates, employees, and the public at risk.” In the document filed with the Pennsylvania Office of Open Records in October, Harper outlined specific reasons as to why each policy needed to be redacted. For example, he said the suicide prevention policy could be used to cause disruption or could allow an inmate to harm themselves without showing any of the signs that employees have been trained to look for. Every word of the 19-page policy was redacted, except the heading and the first sentence.

Bryant disagreed with Harper’s reasoning. “All these policies could be released in their entirety, and it would not pose any threat to the safety and security of that institution, as far as I can tell,” he said after reviewing the affidavit. “I just don’t see the nexus between how the release of this information is going to lead to a disturbance or ‘nefarious’ behavior.”

“I can certainly understand the possibility that some specific parts might be redacted,” Dvoskin said, “But all of it, there’s absolutely no possible way that’s reasonable.”

In denying PublicSource’s appeal, Pennsylvania’s Office of Open Records stated in its final determination that “the County met its burden of establishing a substantial risk of actual harm to an individual or the public if the requested policies are disclosed.” The office typically does not review the policies themselves unless requested to do so, instead relying on written statements from officials. “Here, the [Office of Open Records] relied upon the testimony of the warden who is familiar with the security of this facility. No evidence was presented that contested his testimony or indicated that it was inaccurate,” Executive Director Liz Wagenseller later wrote in an email to PublicSource.

Deitch said government bodies have long deferred to correctional institutions for fear of jeopardizing their safety, but that it’s the “lack of critical inquiry” about what information can safely be revealed that puts more people at risk. “You’ve got to shine a light on what’s happening at correctional facilities in order to keep people safe.”

Tierra Bradford, a criminal justice policy advocate for the ACLU of Pennsylvania, agreed. She called the reasons Harper gave for heavily redacting the policies “vague” and noted that the lack of transparency is likely to increase public suspicion of jail leadership, rather than build trust. “At the end of the day, people have a right to know what government officials are doing and making sure there aren’t any secrets being kept, especially for no good reason,” she said.

One of the policies that Allegheny County redacted was made public in the past, as were several other mental health-related policies that PublicSource was not provided, said Bret Grote, legal director of the Abolitionist Law Center, which is currently litigating several lawsuits against the jail.

Roughly a year before PublicSource’s request, Grote received a number of policies, including the mental health screening and commitments policy, through a public records request. The jail would no longer provide that same policy unredacted in 2020.

PublicSource reached out to all nine Jail Oversight Board members for this story. Brad Korinski, chief legal counsel for Allegheny County Controller and Jail Oversight Board [JOB] member Chelsa Wagner, said he thinks Harper honestly believes disclosing the policies could cause problems. But, Korinski said, the decision should ultimately be made by other leadership, such as the law department or county executive, not Harper.

“This is where I think that political leadership should say, ok, warden, we hear you … but not ALL of these redactions are needed – give me what you can live with and what you can’t,” Korinski wrote in an email to PublicSource. “I don’t think that conversation is being had.”

JOB member and Allegheny County Council member Bethany Hallam said the redactions show the jail administration’s “clear disdain for any oversight of their policies, procedures and practices whatsoever — the same disdain which I have personally experienced as a member of the Jail Oversight Board when requesting even the most basic information about what goes on in the facility which we have direct statutory authority over.”

President Judge Kim Berkeley Clark, who is also a JOB member, said she believes it is inappropriate for her to comment after PublicSource’s appeal was denied by the Office of Open Records. Sheriff William Mullen, also on the board, said he could not answer questions about the jail’s transparency without consulting with the warden and his staff. “I never had a reason in the past to question the jail’s transparency,” he wrote in an email to PublicSource.

“You’ve got to shine a light on what’s happening at correctional facilities in order to keep people safe.”

When asked about the disparity between Allegheny County and other counties, Wagenseller of the Pennsylvania Office of Open Records said different agencies have different policies and interpretations of what they consider public. Had PublicSource provided the other agencies’ policies, she said, it would not have affected the outcome of the appeal.

“The release of similar information by different agencies does not preclude the County from withholding the information. In fact, the Right-to-Know Law recognizes that agencies have the discretion to release otherwise exempt records, in whole or in part,” Wagenseller wrote.

The jail has more than 280 policies, according to Harper, and 50 policies are posted on its website. Publishing the remainder, even if redacted, would “jeopardize the safety and security” of the jail, Harper said at the September JOB meeting. Harper previously declined to allow board members to view the unredacted policies, contrary to state law, but reversed his decision in February.

Much larger agencies have already made similar information public and easy to find online.

The mental health policies are not the only jail policies the county has kept secret. After requesting the jail’s restraint chair policy and receiving an almost entirely redacted copy, PublicSource appealed the request to Pennsylvania’s Office of Open Records. The office in that case sided in part with PublicSource and ordered the county to remove some of the redactions. Instead of doing so, the county appealed the decision in the Court of Common Pleas. The county dropped its appeal in February after PublicSource published the policy in full after obtaining it from a different source.

Bradford of the ACLU of Pennsylvania called Allegheny County Jail’s redactions “totally against the spirit of the Right-to-Know law.” With recent heightened interest in criminal justice reform both nationally and locally, she said, it’s time for institutions to be as transparent as possible. “They shouldn’t expect requests to go down any time soon, so I would just get on board.”

Deitch also argued that transparency is essential for effective oversight. “If outsiders cannot get access to these policies,” she said, “then how can the jail ever be held to account to whether it’s even complying with its own policies?”