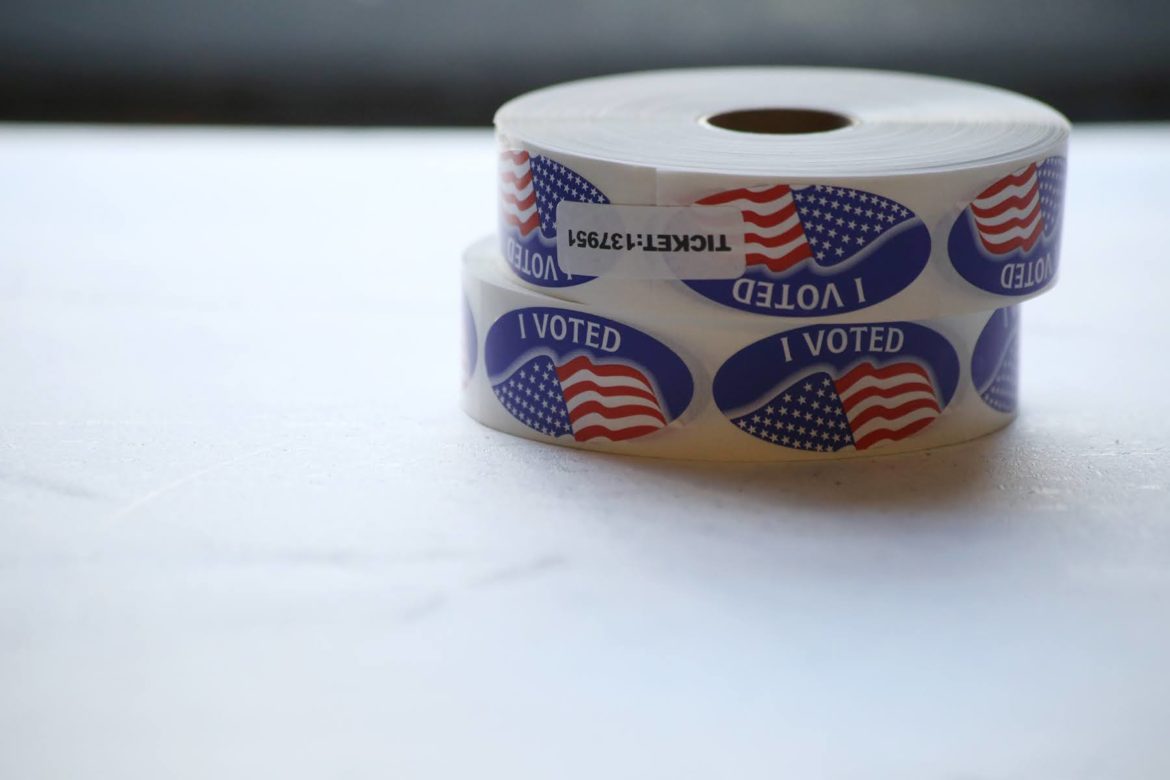 "I voted" stickers at a satellite elections office at the South Park Ice Rink. Voters there could request and fill out mail-in ballots before Election Day. (Photo by Ryan Loew/PublicSource)

Allegheny County's administration of the November 2020 election suffered from inconsistent poll worker training and public communication, among other errors, a new report showed. The county has not outlined plans to address the problems.

“By putting an emphasis on systems, we wanted to make the county implicitly and explicitly more accountable,” said Juliet Zavon, the report’s primary author. “What is the level of competency required of poll workers in this county?”

The report was produced by the Elections Task Force, which Zavon described as an independent group of local residents with expertise in cybersecurity and election administration. The document describes an antiquated poll worker management system, a lack of training for many poll workers and insufficient means for the public to ask questions and learn about voting.

The report makes no allegation that the integrity of the 2020 election was compromised or that there was fraud. It outlines recommendations for the county to revamp its process, calling for greater transparency and communication, improved training procedures, among other investments, with just three months until a May primary election.

A spokesperson for Allegheny County declined to comment on the report but the county elections manager, David Voye, answered questions from PublicSource about the county’s system.

A third of all poll workers received no training prior to the Nov. 3 election. Allegheny County Elections Manager David Voye said in an email to PublicSource that the COVID-19 pandemic and the 25-person indoor gathering limit forced the county to abandon its pre-pandemic standard of training each poll worker. County officials said last fall that every worker would have access to online training, but that training was never provided.

Sam DeMarco, a Republican county councilman who sits on the Board of Elections, said the decision to not offer training to every poll worker was made solely by the Elections Division and that the board has yet to hear an explanation. He said he understood the COVID-19-related restrictions on training for the spring primary but that he expected solutions to be in place before the November election.

County Councilwoman Bethany Hallam, a Democrat who sits on the board, said mistakes due to a lack of training led to isolated cases where a handful of provisional ballots were discarded.

“People’s votes were taken away from them because of a lack of training of poll workers,” Hallam said. “And that's not fair. It's not fair to the poll workers who were expected to be put in that situation without proper training."

The report lists other errors by poll workers that it attributes to inadequate training.

Poll workers in Fox Chapel were unaware that provisional voting is done with the same ballot as regular voting. Poll workers in Swissvale illegally asked voters for photo ID. Multiple polling places in Pittsburgh did not understand procedures for spoiling mail-in ballots — which is the process for allowing someone who applied for a mail-in ballot to vote in person instead — despite this being a focus for the state and county before the election.

DeMarco said he received reports himself of poll workers lacking procedural awareness. “You still had people out there that were complaining that they didn’t know how to handle a provisional ballot, or an affidavit,” he said. “Some people weren’t having people sign the poll book.”

Some workers who did receive training said it was not thorough enough.

“I did not think I was prepared to do the job,” said first-time poll worker Charlene David. “They went over everything, but it was at the beginning of October, and four weeks later, we have the election. So there [were] a lot of things I didn’t remember them going over…There was a lot of stuff that I didn’t understand, and I can’t remember if they went over that stuff or not during the training.”

Though more than enough people registered to work the polls, the county’s assignment system complicated the poll staffing effort. Many would-be poll workers heard nothing from the county and received no response when they reached out by phone and email. The report cites a number of volunteers going to the Elections Division office and discovering that the system used to coordinate poll workers relied in part on pen and paper.

Poll worker Nathaniel Yap discovered this when he went into the office after fruitlessly calling and emailing to find his assignment.

“I think they were working with processes that feel like they’re from the 1980s or something,” Yap said in an interview with PublicSource. “She brought a stack of manila file folders, and she was sifting through pages.”

People could sign up to work the polls through an online portal. Voye said that the county used a “legacy digital system” that it is now phasing out.

Darcy Zotter, who settled in Pittsburgh after retiring from the U.S. Foreign Service, said she went through an in-person training, but nobody from the county contacted her to give her an Election Day assignment.

She said she called the Elections Division and was surprised when the county employee on the other end tried “pretty assertively” to convince her to be a judge of elections despite the fact that Zotter was a first-time poll worker. (Each polling place is staffed at least by two clerks and two inspectors and led by a judge of elections.)

Though it had a vast backlog of willing poll workers, the Elections Division asked some poll workers to recruit their own teams. The report noted that the division was “desperately seeking 40 more poll workers” several days before the election.

Yap said he was assigned to be a judge of elections in October, but the rest of the slots at his location were vacant. An Elections Division employee told him she would “try to help” fill them, but another employee told him he could recruit his own team for Nov. 3.

“For first time people, it’s sort of a strange process,” Yap said. “It shouldn’t be like that, right? You shouldn’t have to go out and find people yourself.”

Voye said this is one of “many techniques” used to recruit poll workers and that he finds that poll workers “welcome the ability to fill vacancies on their boards.”

Hallam and DeMarco said inadequate staffing at the Elections Division led to a backlog of unanswered phone calls in the runup to Election Day. Voters who were trying to navigate a new mail-in voting system and poll workers in the dark about their duties were met with silence when they contacted the county.

Questions from the public spilled into social media, where people like Hallam tried to address them one by one.

“I worked all day and was on Twitter all night just helping people because they were scared and they were confused,” Hallam said. “It was such a crucial election and so much was on the line and people just didn’t have the information that they needed.”

Pennsylvania expanded its mail-in voting system in 2019, making it open to all voters with no need for an excuse. DeMarco said the 2019 legislation amounted to an “unfunded mandate,” resulting in confusion among voters and no funding for counties to ramp up voter education and customer service efforts.

Voye did not specify how much staffing was available for the customer service effort around the election, but he said that a county call center and temporary employees assisted in answering questions from the public.

Zavon’s report follows up each group of issues with recommendations. It urges the county to allocate more staffing to public communications during election season and to create a more intuitive website. It calls for more extensive training for all poll workers and a computerized system to track poll worker assignments.

With a primary election upcoming on May 18 — including a contested mayoral primary on the ballot in Pittsburgh — preparations are already underway.

Hallam said she does not expect the Board of Elections to move on the issues despite her calls for action. She sits on the three-member board with DeMarco and Democrat Rich Fitzgerald, the county executive.

Hallam said she felt that other members of the board “could[n’t] care less” about voter education and improving poll worker training and organization, adding that when she brought up problems during board meetings they were dismissed as non-issues.

“All of these issues were brought up at every single Board of Elections meeting,” Hallam said about the report. “All of them were not addressed...So why should I have any confidence whatsoever that these issues are going to be addressed?”

A spokesperson for Fitzgerald declined to comment on his role on the Board of Elections. DeMarco said he has “no confidence” that the issues will be addressed, and he placed the responsibility squarely on the Elections Division, rather than the board.

“These things occurred in November and nobody’s put forth a plan to tell us how all that stuff is going to be addressed,” he said. “How can I be assured of anything?

“There’s a lot of questions about this [upcoming] primary. Will there be answers? So far, the answer is no.”

This story was fact-checked by Danielle Cruz.