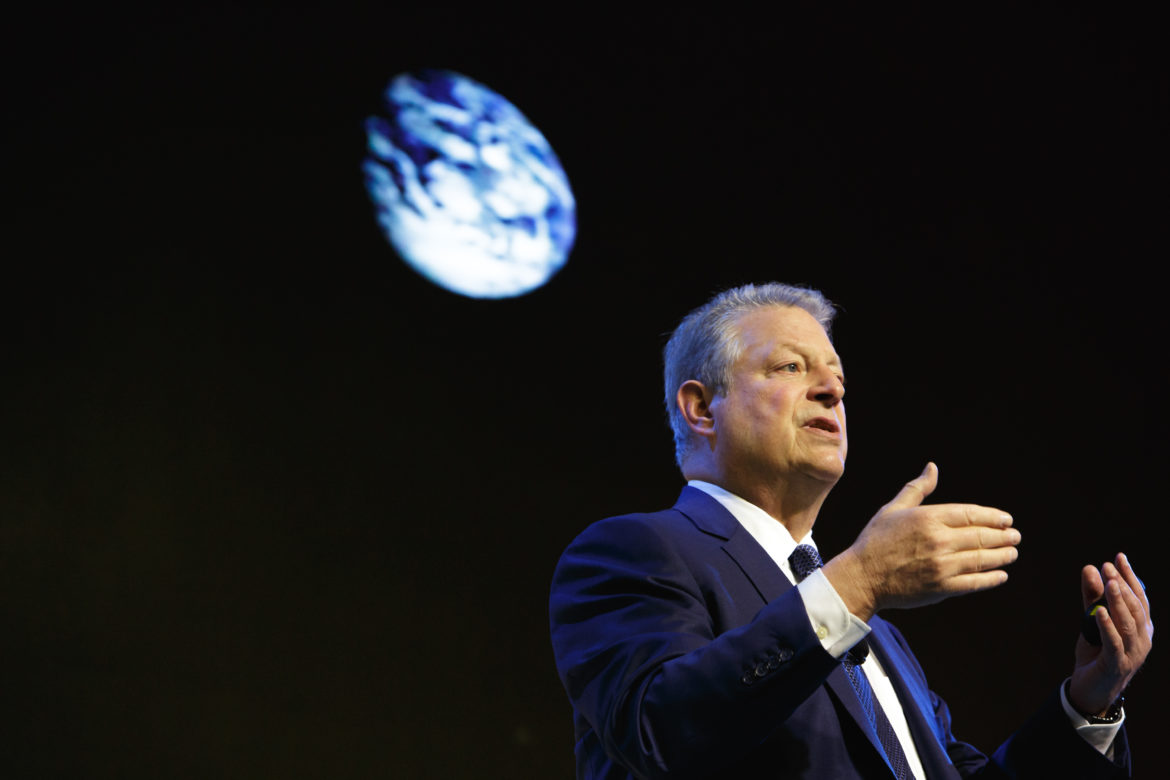 When President Donald Trump said he was “elected to represent the citizens of Pittsburgh, not Paris,” while announcing the U.S. withdrawal from the Paris Agreement in June, it became a viral story. Pittsburgh Mayor Bill Peduto saw it as an opportunity to market Pittsburgh as a leader in addressing climate change on Twitter, TV and elsewhere. He and the mayor of Paris co-authored an op-ed in the New York Times, “embracing the global challenge of fighting climate change.”

But what can a city like Pittsburgh realistically do to mitigate climate change? How can one inspire climate action on the local level?

Former Vice President Al Gore’s organization has been doing it for years by training “climate reality leaders.” This year, the “activist training” will take place in Pittsburgh with support from the Heinz Endowments*. The application period is open until September 12.

Gore’s organization, The Climate Reality Project (CRP), will host its 36th leadership activist training session from Oct. 17 to 19 at the David L. Lawrence Convention Center. The CRP is still deciding on specific programming for the Pittsburgh training, but confirmed that Gore, who just released the sequel to the “An Inconvenient Truth” documentary, will give a slideshow presentation at the event.

The event expected to draw between 1,000 and 1,400 people will host lectures and discussion panels with the intention of creating more “Climate Reality Leaders.”

What does one of these leaders do?

“I think that in this day and age, what we’re looking at clearly is not leadership on climate from the federal level, so it’s going to have to come from cities like ours and individual citizens.”

According to Stacie Paxton Cobos, senior vice president of communications at the CRP, the leaders are trained “to share the reality of the climate crisis and organize their communities to act.”

The CRP emphasized what Grant Oliphant, president of the Heinz Endowments, called a “train the trainer” model. “They work with regular citizens to help them understand climate science and then also help them learn how to talk about it with other people,” Oliphant said.

One local organization, Pittsburgh’s Green Building Alliance, will send multiple members from its team to the training to learn how to better communicate the threat of climate change. Its executive director, Aurora Sharrard, said it’s often difficult to pinpoint what will convince someone to be more sustainable or to see climate change as a threat.

“You never know what’s going to bring someone through their door to sustainability,” Sharrard said. “But once you walk through that door, you never walk out.”

Sharrard, who’s worked in this field for over a decade, said when she learned of Gore’s program coming to Pittsburgh, she was excited to learn how to be a leader from the “best of the best.”

Once a leader has gone through training, they must perform at least 10 “acts of leadership” within a year.

Acts of leadership “can be anything from giving a presentation of Vice President Gore’s slideshow to writing a letter to their local representative in support of climate action,” Cobos said.

Between CRP’s 12,438 trained leaders, the CRP has logged 14,350 acts of leadership so far in 2017. Its website profiles some notable leaders — solar energy executives, nonprofit leaders, boat captains and architects.

Another Pittsburgh activist Joylette Portlock said the training helped carve a clear path in her career back in 2007. Prior to becoming an activist, she worked in a lab doing biological research. Now she hosts an online video series about climate change called, “Don’t Just Sit There — Do Something!”

Part of the value for her was in joining a community of like-minded people but also gaining skills she still uses today in outreach and community engagement.

“Talking to other people has been helpful for me in shaping a lot of the work I do now in terms of approach and how to best engage audiences,” Portlock said.

So the training is working at getting people to talk about climate change. But is this the most effective way of promoting change?

If the public is to take to their local communities and preach Gore’s message of fighting climate change, Mann said the message will need to balance anxiety and hopefulness.

“I think we have to communicate simultaneously both the urgency and the legitimate reasons for cautious optimism,” Mann said.

Not everyone is as convinced on Gore’s methods, however. Sterling Burnett is a research fellow from The Heartland Institute, a conservative think tank based in Texas. He has a doctorate in applied philosophy and environmental ethics and has debated CRP leaders onstage at Texas high schools twice in the past.

“As the Mayor of Pittsburgh, I can assure you that we will follow the guidelines of the Paris Agreement for our people, our economy & future."

He said he’d like to see more representation of both sides of the climate change coin. Burnett called Gore’s method “propaganda” and said he’d prefer to see skeptics included in public forums regarding climate change.

“They should have somebody there... that can present—a lot of people want to call it ‘the other side,’ but I just want to call it—‘the facts,’” he said.

In terms of renewable energy, Burnett worries that solar and wind solutions are not being critiqued like natural gas or coal.

“If they’re going to bemoan the environmental impacts of traditional sources of energy — and there are drawbacks — they should also treat the energy they’re promoting the same,” Burnett said.

While Gore himself will present his latest slideshow at the event, organizers are planning to tailor their content specifically to the city of Pittsburgh. The CRP wants to include local activists who can touch on local solutions.

“The training will also devote time for taking action where new Climate Reality Leaders put their training to use supporting climate solutions right here in Pittsburgh right away,” Cobos said.

The CRP’s funders believe in their ability to do just that. The Heinz Endowments will sponsor the conference with $590,000. While discussing their decision to support the project, Oliphant said they gave the award because much of the fight against climate change now resides at the local level.

“I think that in this day and age, what we’re looking at clearly is not leadership on climate from the federal level, so it’s going to have to come from cities like ours and individual citizens,” Oliphant said.

Federal support of climate change policy has shifted since President Donald Trump took office. He withdrew from the Paris Climate Accord, stating that it “disadvantages the United States to the exclusive benefit of other countries.” He also said the United States would stop contributing to the Green Climate Fund, an international fund dedicated to reducing greenhouse gas emissions in developing countries. Trump said the fund was costing the U.S. a “vast fortune.”

Peduto made his opposition to Trump’s decision clear the day of the announcement.

“As the Mayor of Pittsburgh, I can assure you that we will follow the guidelines of the Paris Agreement for our people, our economy & future," Peduto wrote on Twitter.

Peduto later stated on his website he was “appalled that the President used my city to justify his unacceptable decision.”

Since then, Peduto pledged that the city would be powered by 100 percent renewable energy by 2035.

Evan Bowen-Gaddy is a PublicSource intern. He can be reached at evan@publicsource.org.

One thought on “Al Gore’s program to train “climate reality leaders” in Pittsburgh in October. What’s the goal?”