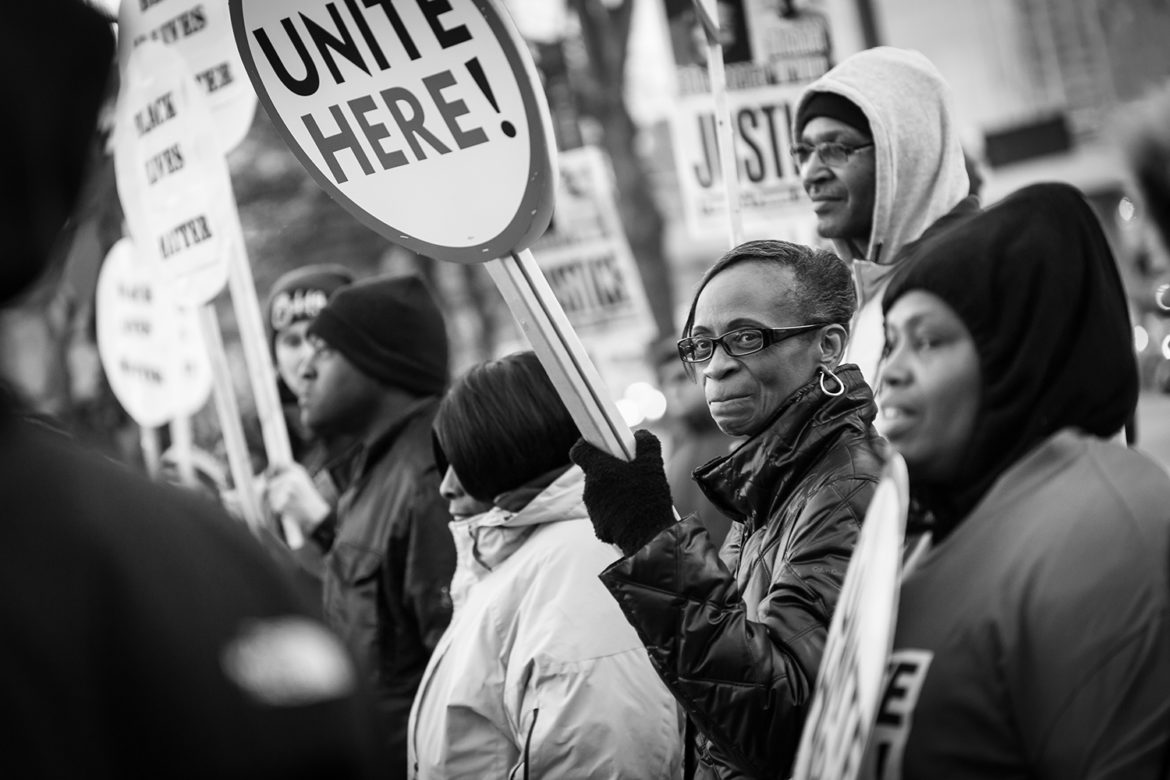 After the killing of five police officers in Dallas in retaliation for the killing of black men by police in Louisiana and Minnesota, Pittsburgh Police Chief Cameron McLay called an emergency meeting Saturday with leaders in the city’s black community.

As he told NPR’s Steve Inskeep today, he realized the bloodshed could be polarizing for police and residents and wanted to ensure relations would not fray.

McLay told Inskeep that the black community has felt “under siege for some time.”

The recent killings by police of Alton Sterling and Philando Castile are only the latest in a string of shootings that have stoked outrage and fear that police are wrongly using deadly force against black men.

Meanwhile, police across the country are on edge following the targeted killings of Dallas officers at a Black Lives Matter protest by a heavily armed Army veteran aiming for white officers.

Peaceful Black Lives Matter marches were held in Pittsburgh on Friday and Saturday, with police in attendance to give security and be sure that the lines of communication stay open.

“An overreaction by law enforcement would be the worst possible thing right now from the standpoint of our relationship with our communities of color,” McLay told Inskeep.

That said, McLay’s decision to call an emergency meeting after the Dallas killings drew criticism from some leaders he contacted.

“They said, ‘Chief, where were you when two young black men were killed? You didn’t call an emergency meeting then,’” McLay told Inskeep. “So that was a dose of humble pie for me.”

Restoring relations between police and the community has been McLay’s major mission since he took his post in September 2014, weeks after the killing of Michael Brown in Ferguson, Mo.

Pittsburgh was among 12 municipalities that shared use-of-force data for a new report from the Center for Policing Equity. The report, which analyzes the data broadly and does not name the cities involved, found that police are far more likely to use force against black residents compared to white residents.

From The New York Times:

The organization compiled more than 19,000 use-of-force incidents by police officers representing 11 large and midsize cities and one large urban county from 2010 to 2015. It is the sort of data the Obama administration and the Justice Department have been seeking from police departments for nearly two years, in many cases, unsuccessfully.

The report found that although officers employ force in less than 2 percent of all police-civilian interactions, the use of police force is disproportionately high for African-Americans — more than three times greater than for whites.

The report looked at force broadly and did not gather enough data to examine disparities related to deadly shootings, the Times said.

While some argue that black residents face more force because they are arrested more often, the report rebuts the presumption that increased force is due to increased involvement in crime.

“[T]he data really makes it difficult to say that crime is the primary driver of this,” Phillip Atiba, president of the Center told the Times. “In every single category, the anti-black disparity persists.”

Meanwhile, another new study, in a surprise to its author, found no racial bias in shootings by police based on data from Los Angeles and select departments in Florida and Texas, including Dallas.

More than 1,300 shootings from 2000 to 2015 were examined in the study released by the National Bureau of Economic Research. The research included non-fatal incidents, and Roland Fryer Jr., the study’s author, said the outcome was “the most surprising result” of his career, according to the Times.

Fryer, an economics professor at Harvard, said that while the study revealed no bias specific to shootings, bias was apparent in the use of force more generally.

Lethal incidents are far more rare than non-lethal force incidents, and they’re also far less likely to draw the kind of scrutiny and mass outrage like the killings of Sterling, Castile and Brown.

That force is more likely to be directed at black residents ties back to the national conversation on bias in policing and the perception McLay noted in Pittsburgh of the black community feeling under siege.

Fryer, who is the youngest black academic to receive tenure at Harvard, said he has firsthand experience of rough and discourteous treatment by police.

“Who the hell wants to have a police officer put their hand on them or yell and scream at them? It’s an awful experience,” he told the Times. “I’ve had it multiple, multiple times. Every black man I know has had this experience.”