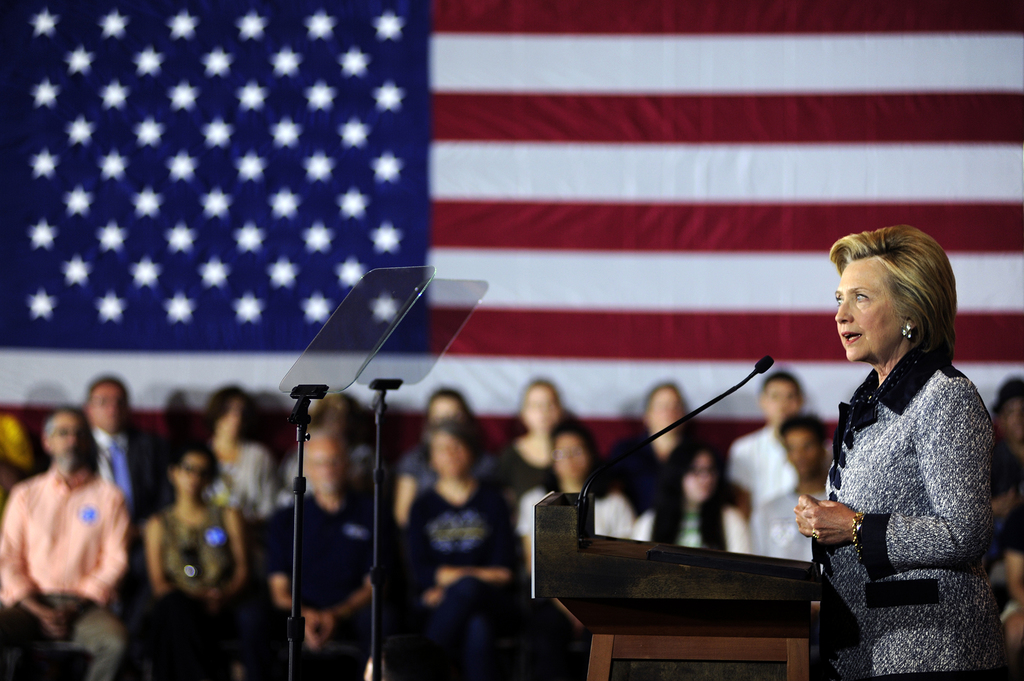 Hillary Clinton made a no-nonsense speech at a union hall in Pittsburgh today, outlining a plan to eradicate radical jihadism in the wake of Sunday’s massacre that targeted the LGBT community.

While Clinton reaffirmed parts of her basic platform — like her role in building the “greatest middle class in the world” through unions — today’s speech concentrated on the severity of domestic terrorism, the significance of radical jihadist ideology and the person who is working against her plans.

The United Steelworkers [USW], along with the International Brotherhood of Electrical Workers Local Union #5, each recently endorsed Clinton, compelling her stop in Pittsburgh for an event that drew roughly 500 attendees.

Clinton beelined to the tough subject matter, digging into Sunday’s tragic shooting at a gay nightclub in Orlando, Fla., which left 49 people dead and 53 wounded. The shooter, who was killed at the scene, pledged allegiance to the Islamic State in Iraq and Syria [ISIS] in a 911 call before the attack.

“We are all still reeling from what happened on Sunday — another terrorist attack not overseas, but here at home...so many Americans killed and wounded.

“A hate crime at an LGBT nightclub right in the middle of Pride Month. The deadliest mass shooting in the history of the United States, and the losses stretch all the way to Pennsylvania,” she said.

Clinton said it is a “poignant reminder” that the nation is connected.

To prevent subsequent mass shootings, she detailed her plan to neutralize radical jihadists, emphasizing that the government must detect and prevent possible lone wolf attacks with on-the-ground and online monitoring.

“These attacks are carried out by individuals who may or may not have any direct contact with an organization like ISIS but are inspired primarily over the Internet by its twisted ideology,” Clinton said.

Listen to what Pennsylvanians at the rally said should be done to address mass shootings.

However, she was careful to point out that she would not “demonize or declare war on an entire religion,” that the ideology behind these types of attacks is a “perverted version” of Islam.

Clinton said the United States should work with Muslim communities because they are often the first to recognize radicalization.

She also outlined her stance on gun control, claiming compromise is still possible between party lines:

“I believe we Americans are capable of both protecting our Second Amendment rights [and] making sure that guns don’t fall into the wrong hands,” she said.

“Weapons of war have no place in our streets,” she added, causing the room to erupt in applause.

Calling for unity and solidarity between parties, Clinton segued into a conversation about presumptive Republican candidate Donald Trump and his “shameful” stance on the Orlando shooting.

“Just one day after the massacre, he went on TV and suggested that President Obama is on the side of the terrorists,” she said. “Even in a time of divided politics this is way beyond anything that should be said by someone running for president of the United States.”

However, she did point out that the Orlando shooter, Omar Mateen, was from Queens, N.Y. — the same neighborhood Trump himself hails from.

Clinton went on to describe her disenchantment with Trump’s immigration policies, calling his method of ostracizing Muslims “un-American.” She said Trump’s plan to ban Muslim immigration is generally “nonsensical,” and, in this case, would not have prevented the shooting because the shooter was born in the United States.

“It was one thing when he was a reality TV personality; it is another thing altogether when he is the Republican Party’s presumptive candidate.

“We don’t need conspiracy theories and pathological self-congratulations. We need leadership, common sense and concrete plans because we are facing a brutal enemy. In the Middle East, ISIS is attempting a genocide of religious and ethnic minorities,” she said.

Clinton called on Pennsylvanians to elect a calm, collected and dignified president this November.

“History will remember what we do in this moment,” she said.