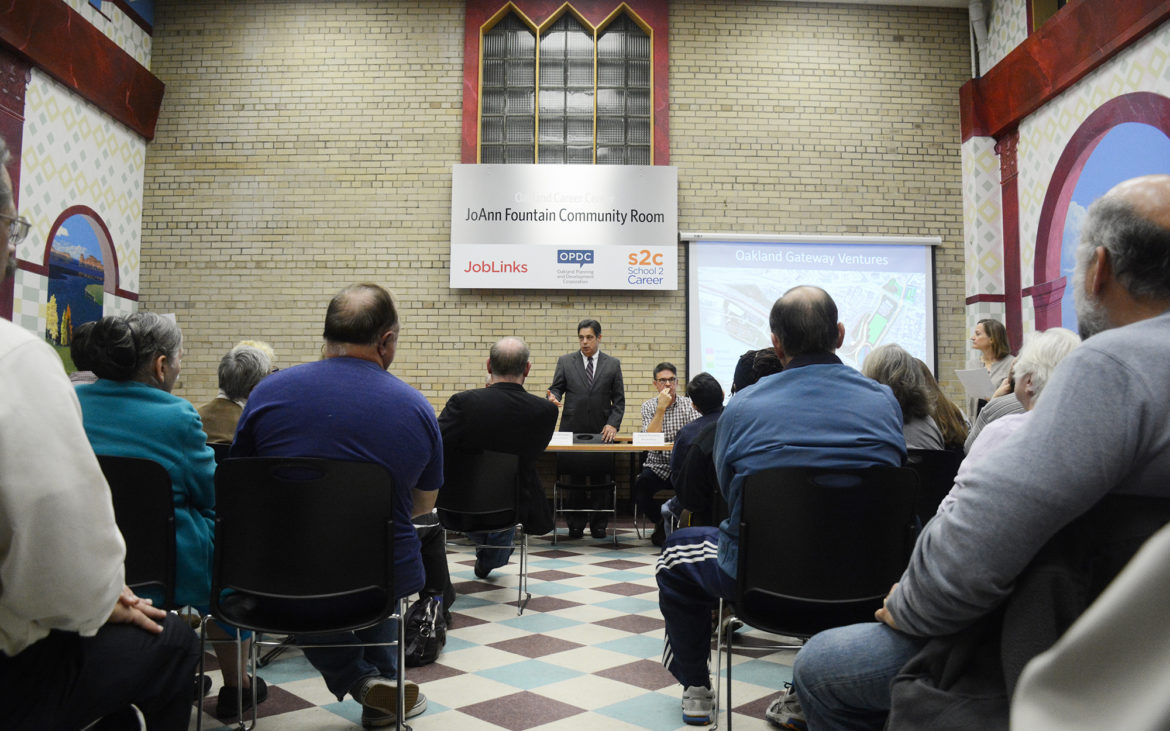 Nearly 100 people showed up to a community town hall Thursday night hosted by the Oakland Planning and Development Corporation on the controversial Oakland Gateway Ventures project. (Photo by Stephen Caruso/PublicSource)

After months of community outrage and government opposition, an Oakland Gateway Ventures (OGV) representative said they are going to redraw their plan for South Oakland.

The announcement comes the day after nearly 100 Oakland residents gathered in a meeting hall Thursday night to get answers on OGV’s transformative plan to redevelop Bates Street. In a meeting announcement, the Oakland Planning and Development Corporation (OPDC) said the developer would be there, yet no OGV representative showed themselves until the end, providing little new information.

But in an interview with PublicSource Friday, an OGV principal member Bill Kane, who was not able to attend the Thursday meeting due to a scheduling conflict, said the development group was going to downsize the project’s scope to meet city and community demands — despite the fact that he believes the project as proposed would be an economic boon to Oakland.

“We’re going back to the drawing board,” Kane said of the project.

Residents and politicians spent the better part of an hour at the meeting, criticizing and expressing opposition to OGV’s $650 million plans. Preliminary designs included removing hillsides and razing homes in order to replace them with the state’s second largest parking garage and a hotel. OGV also proposed to straighten and widen the often jammed Bates Street that connects South Side with Oakland.

An analysis conducted by the OPDC with the Pittsburgh Community Reinvestment Group this week said the project could cost nearly five times the estimated $650 million.

Wanda Wilson, the OPDC executive director, said she would want to hear more details about OGV’s new plan before she could respond to the developer's statement.

However, she added the OPDC is always happy to talk with developers who follow the city’s process and engage with the community, and that OPDC’s job was to be critical of proposed development.

Last night, she said the meeting was helpful in clearing matters up for residents of the centrally located and oft-redeveloped neighborhood.

“There’s a lot of misinformation and rumors going around about this development company,” Wilson said, referring to threats of eminent domain that had no government approval, as well as OGV’s claims of support from local government officials that had not endorsed the plan. City Council President Bruce Kraus said he saw no path forward for the approval of the Oakland Gateway Ventures' proposed project in its current state. (Photo by Stephen Caruso/PublicSource)

In fact, every member of the panel, from City Council President Bruce Kraus and State Sen. Jay Costa, to planners at the Pennsylvania Department of Transportation and Pittsburgh City Planning, expressed reservations, if not outright opposition, to OGV’s plan.

Kraus was especially incensed that the developers have used courtesy meetings — given by elected officials to developers to hear out their ideas — as signs of full approval. That, in addition to the lack of outreach and input of the community, represented bad faith from OGV, Kraus said.

Blithe Runsdorf, 72, is a Schenley Farms resident in North Oakland and an active resident member of OPDC. She’s lived in the neighborhood since 1980.

While the development wouldn’t affect Runsdorf’s home directly, she opposed the development on principle. She said it’s important that communities stand against new construction and direct any changes into the zoning process.

“You have to hold the developer’s feet to the fire [for them] to do their due diligence,” Runsdorf said.

“We’re not going to do anymore false starts on this."

Zoe Lardas, 56, lives with her husband on Parkview Avenue in South Oakland, just up the Boulevard of the Allies from a proposed hotel and all the traffic she expects it would bring. She worried that OGV’s development could ruin the character of the mostly residential neighborhood.

“The community has to stick together or it’s not a community,” Lardas said.

Kane told PublicSource on Friday that when the project was originally conceived, back in 2007 as a single building on Bates Street, then-Mayor Luke Ravenstahl’s administration supported the plan. It’s only been under Mayor Bill Peduto’s administration that the project has encountered resistance from the city, he said.

Kane added that the plan only expanded from the single building into a $650 million project because of community input. He wouldn’t say where the input came from.

Kraus wouldn’t rule out construction to Bates in the future — in fact, the OPDC 2025 Master Plan includes modifications to the street to ease traffic flow — but he said he couldn’t imagine the proposed plan getting political approval let alone passing the zoning board.

“It is not that nobody wants to consider improvements to the Bates corridor, that is open, but [OGV’s] discussion is off the table as far as the city is concerned,” Kraus said.

Thursday night’s meeting took an awkward turn when Kraus — responding to a crowd outraged by the neglected condition of 12 OGV-owned rowhouses on Bates — stood up and announced that if an OGV member was present, they should show themselves. With that, Bill Bannow, a white-haired man, stood up to face the crowd of people who had spent the better part of an hour deriding OGV’s proposal. The only representative of OGV to show up to the meeting, Bill Bannow, did not publicly identify himself or speak to the room until called on by City Council President Bruce Kraus. (Photo by Stephen Caruso/PublicSource)

Bannow, who manages real estate acquisition for OGV, said the developers didn’t need to speak at the meeting, as they had met with city planners in June and a few weeks ago in October for a follow-up, during which the city expressed reservations that mimicked those of many of the officials in attendance.

Afterward, Bannow refused to comment further on the project, claiming that OGV had said all they could to the city. On Friday, Kane said he’s not concerned about the project anymore and had investments lined up in other cities, such as Charlotte and Cleveland.

Kane said the group isn’t giving up entirely on the Bates Corridor, though. He said OGV is requesting another meeting with the department of city planning before diving into the redesign.

“We’re not going to do anymore false starts on this,” he said.

Stephen Caruso is a Pittsburgh-based journalist. He can be reached at stephencaruso23@gmail.com. Follow him on Twitter @StephenJ_Caruso.