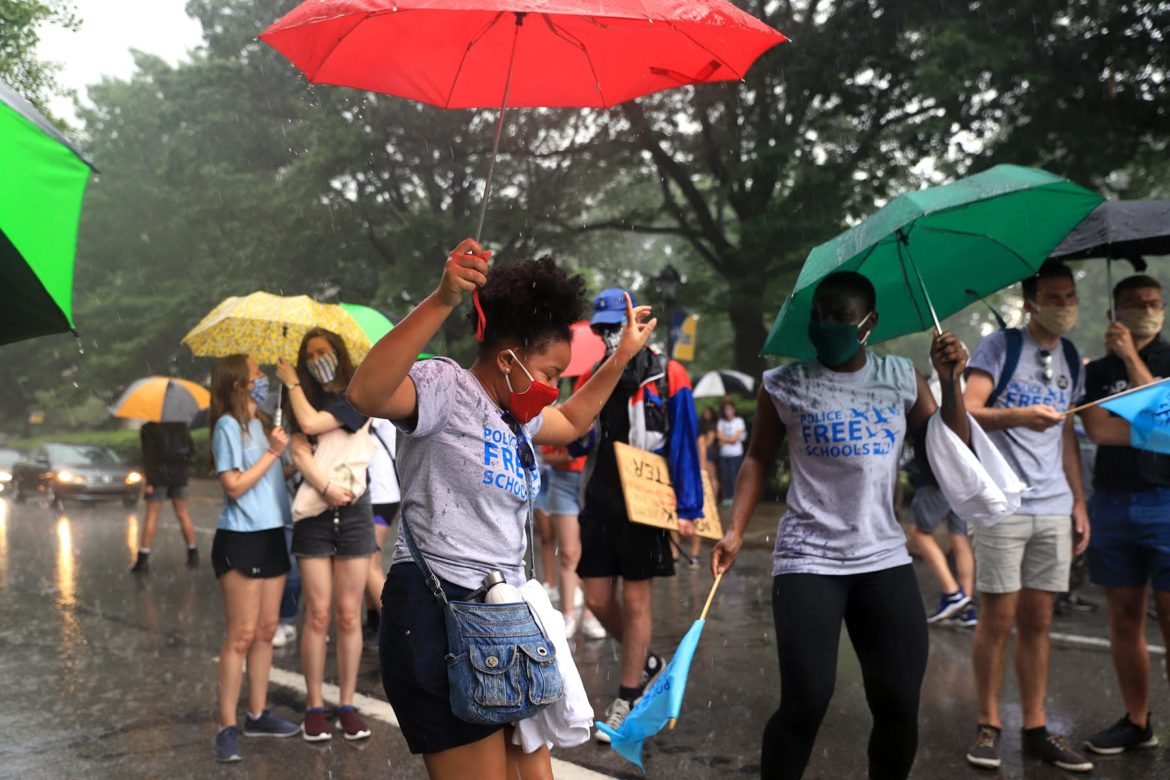 While some students see school as a safe haven, “where you get that one meal a day, where you get to have mentors who don't judge you,” other students — mostly Black or brown and disproportionately impacted by the presence of school police — live in fear.

“No one should ever feel as if they have a target on their back in school,” 18-year-old Rebekah Chikuni said.

Chikuni is a 2020 graduate of Upper St. Clair High School who on Monday was among hundreds of students, parents and schools advocates who called on Pittsburgh Public Schools’ board of directors to remove police from its schools, first at a rally, then in public testimonies at a school board public hearing.

School should be a place that nurtures students, promotes self-growth, Chikuni said, but with police in schools, “whether or not they're armed or not, their presence in schools is toxic to Black and brown students.” Chikuni is a member of GirlGov, a program of The Women and Girls Foundation, where she helps lead the racial justice committee.

Nearly 300 people attended the school board’s Monday public hearing, where much of the public concern swirled around removing police from schools. Almost 250 people signed up to speak at the hearing, which prompted the board to split the meeting into two days. The second part of the public hearing will be held virtually June 23 at 2 p.m.

A Brashear High School parent testified at the hearing that she worried about what could happen in schools, “if you take the only protection our kids have away from them.”

For years, advocacy groups and parents have called on PPS leaders to remove police from schools and instead, invest funds in additional resources for students and schools, such as counselors, social workers and mental health professionals.

Advocates reignited their call for the removal of Pittsburgh Public School police in the wake of the death of George Floyd, a Minneapolis man who was killed May 25 by a police officer. Minneapolis Public Schools terminated its contract with the Minneapolis Police Department in a unanimous school board vote in early June. 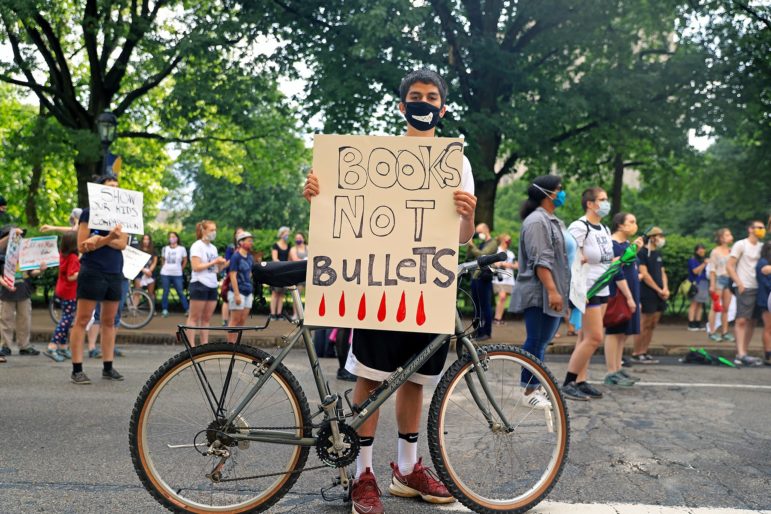 In recent weeks, parents, community members and school leaders in several cities across the country have called for similar shifts.

PPS has its own police force; they are able to make arrests, but not authorized to carry firearms.

Despite lobbying from PPS Chief of Safety George Brown Jr., the school board in October 2018 rejected a proposal to arm school officers. Brown, at the time, said officers needed to be armed to keep schools safe from outside threats.

A 2017 PublicSource analysis of school police records obtained through a Right-to-Know request found that Pittsburgh school police filed charges 3,400 times for cases on school grounds in the prior four years. Eighty percent of the time, charges were filed against Black students.

Ghadah Makoshi was one of the 102 testimonies scheduled to be read on the first night of the public hearing. Makoshi, of Squirrel Hill, is a community advocate for the American Civil Liberties Union of Pennsylvania, focused on school policing. As schools increase police presence, Makoshi said, the reported number of crimes also increases, which disproportionately affects Black students, “and for very minor offenses.”

“None of these are new things,” Makoshi said. “There's a whole system that criminalizes students and the police being in schools is one aspect of that.” She went on, “Instead of routine juvenile behavior being treated as just normal teenage behavior, it's criminalized. PPS over-utilizes our police.”

Her testimony was read aloud at Monday’s hearing, where she said: “Even the most caring and best-trained police cannot, and should not be expected to, replace counselors.” 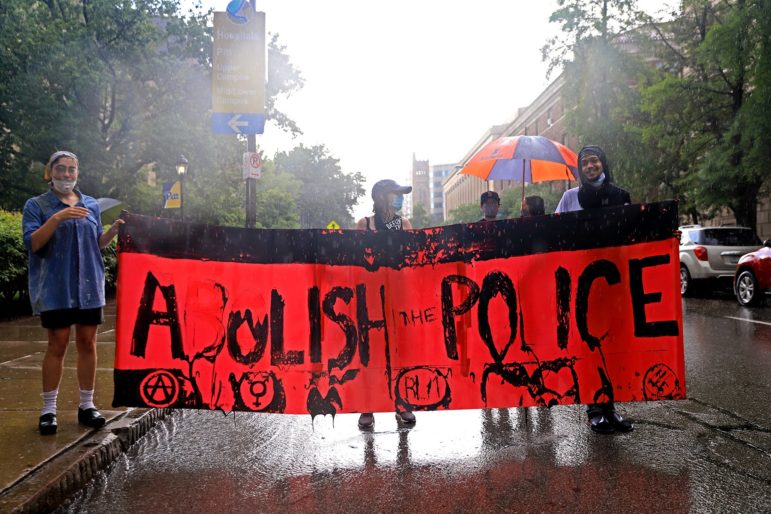 Maya Shook, a 17-year-old Allderdice High School student, created and circulated a survey on June 17 to collect and catalogue the experiences her peers have had with school police for an article she wanted to write for her school newspaper. About 35 students responded, Shook said.

“Some people have noticed that (school police) have escalated situations or responded to fights with unnecessary aggression, and that they have targeted Black students and given them harsher punishments for infractions that white students also did,” Shook said.

While Shook herself says she doesn’t usually interact with school officers beyond bag checks and metal-detector check-ins, she still knows “that there's so much evidence that shows that having police in schools, they target students of color and criminalize non-violent behaviors.”

Both of Shook's parents, Jeff Shook and Sara Goodkind, have long been juvenile justice advocates, working to address the school-to-prison pipeline and remove police from schools. 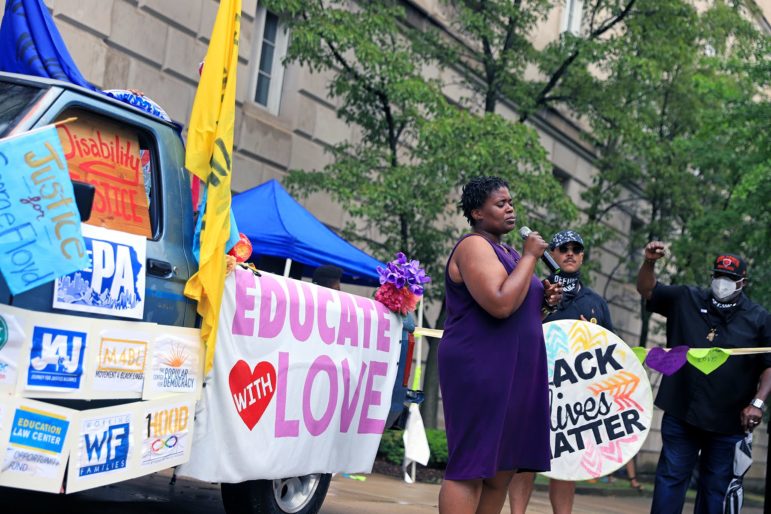 A rain-soaked Jacquea Mae sings during the protest in Oakland against police presence in schools. (Photo by Jay Manning/PublicSource)

Many advocates, in speeches and public testimony, cited national and local data to illustrate why police should be removed from schools.

National data shows that more than 70% of high schools and about 30% of primary schools have sworn law enforcement officers routinely carrying a firearm on campus.

Lots of movement leaders have proposed shifting funding used on school officers to instead hire more counselors and social workers, but Maya Shook says that in her survey, many students at Allderdice wanted cleaner bathrooms, healthier lunches and updated textbooks. Some also suggested funding more arts and extracurricular programs.

The hearing was preceded by a “Cops OUT of PGH Schools” rally at the Pittsburgh Public Schools Board of Education building in Oakland where about 200 students, parents and schools advocates descended to demand the removal of police from Pittsburgh Public Schools. The Facebook event said the rally was hosted by One Pennsylvania and 12 other organizations, including the American Civil Liberties Union of Pennsylvania, Education Law Center and The Women and Girls Foundation.

More than 1,700 parents, students and schools advocates have signed a petition, first circulated after a letter was sent to the school board on June 12 from those organizations, which calls on the Pittsburgh Public Schools [PPS] Board of Directors to immediately remove the district’s 22 police officers, end “systems of policing” and invest in “culturally-responsive approaches to restorative and transformative justice.” 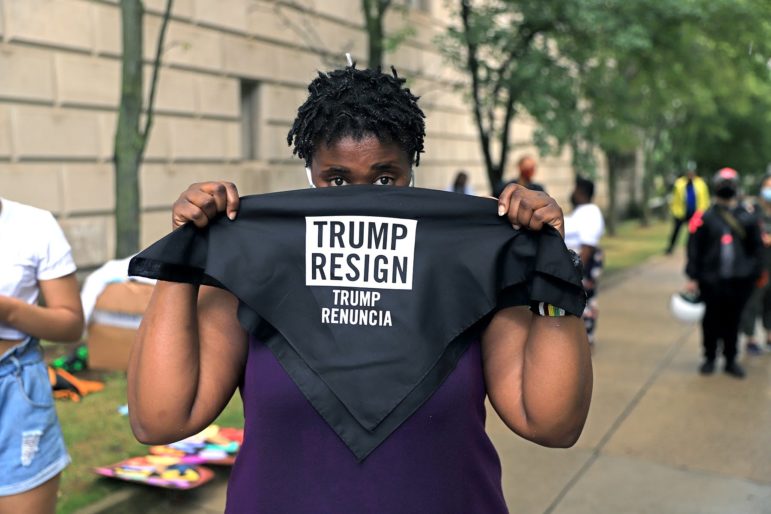 The petition said Pittsburgh has one of the highest student arrest rates in the state and cited local data that showed within the city of Pittsburgh, Black youth account for 84.4% of all arrests and 87% of all disorderly conduct charges, despite accounting for only 40.4% of the youth population.

Among the organizations listed on the petition are the ACLU-PA, One Pennsylvania, Education Rights Network, Gwen’s Girls and the National Movement for Black Lives.

Attendees waved banners in honor of their cause. They danced to songs including “Alright” by Kendrick Lamar. Then, they listened to speeches by advocates in organizations who put the event together. One banner being raised read “fund schools not prisons. Freedom to thrive.”

Despite heavy downpour at its start, demonstrators danced throughout the rally and raindrops. Organizers handed out free umbrellas, T-shirts and masks.

Cheryl Kleiman, a Pittsburgh attorney at the Education Law Center said removing police from schools is just the first step, “not the end goal,” noting that if police are able to circumvent rights and protections, “children are not safe... children cannot thrive in this environment.” 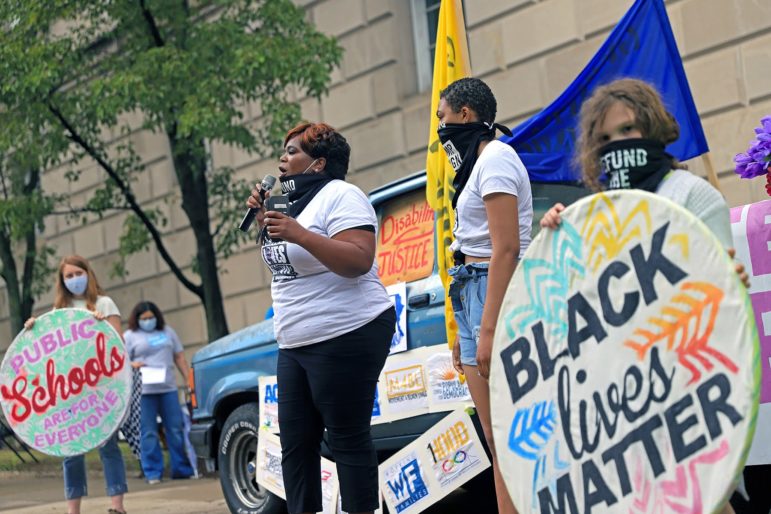 “There’s only two sides,” said CEO of Gwen’s Girls Kathi Elliott. “You can’t be in the middle. Either you’re against racism, or you’re for it. So, get involved.”

Elliott went on, “Enough is enough. We’ve got data. We’ve got facts... we’re going to deal with each and every issue based on facts.” 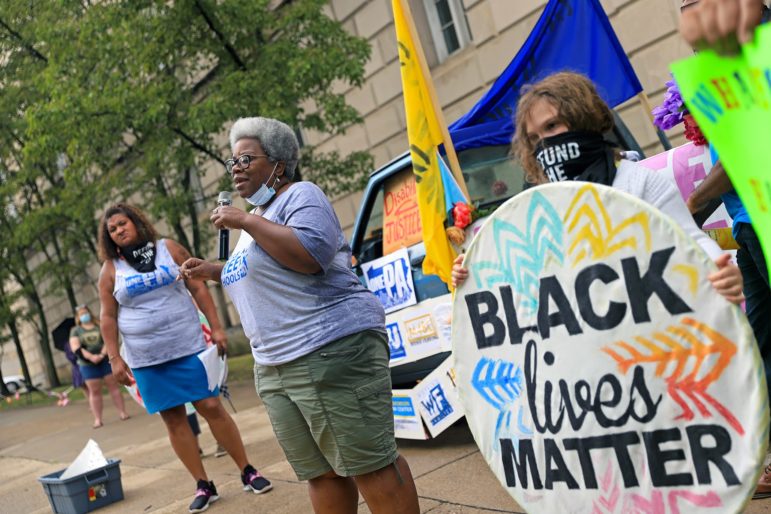 Angel Gober of OnePA, left, and Paulette Foster, the co-founder of Education Rights Network speak at a rally against police presence in schools. (Jay Manning/PublicSource) 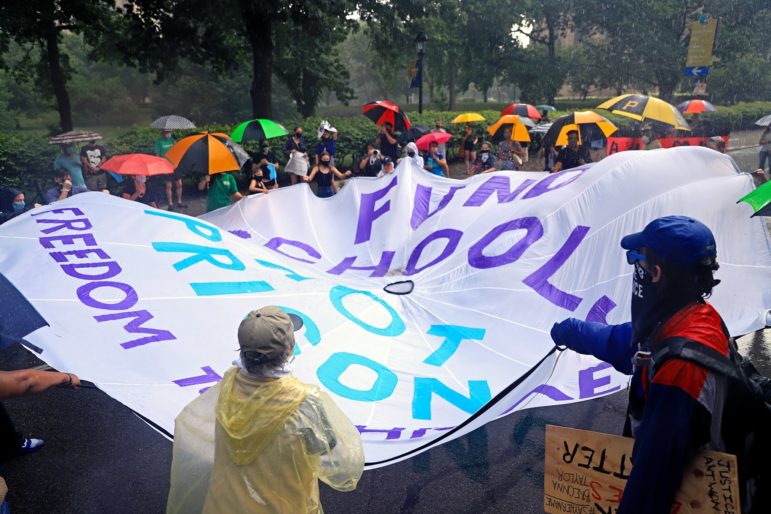 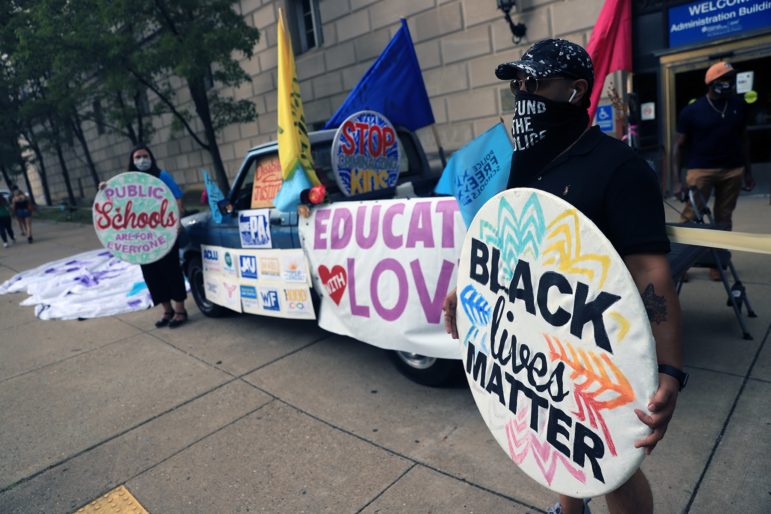 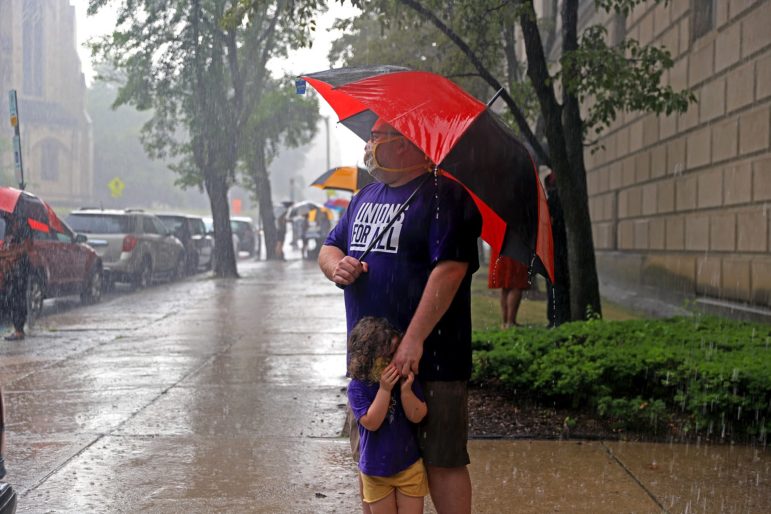 Juliette Rihl contributed to this reporting. TyLisa C. Johnson covers education for PublicSource. She can be reached at tylisa@publicsource.org.