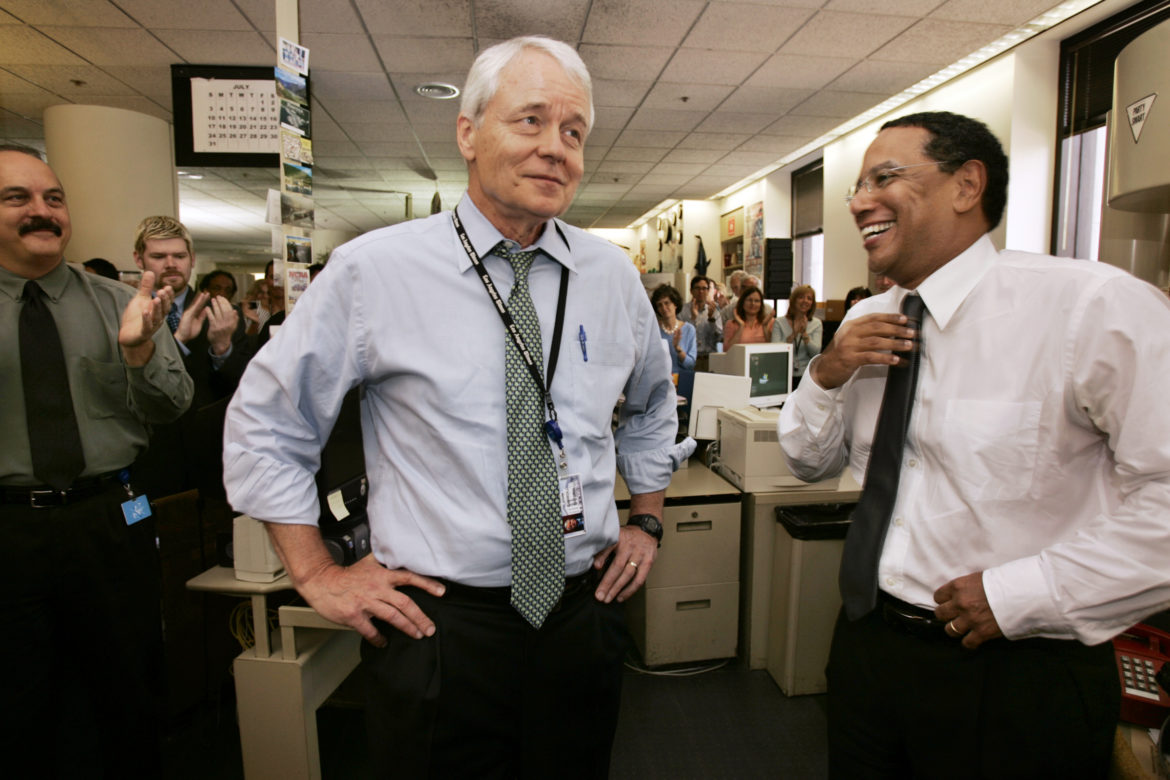 Back in the early 1970s, when Gene Roberts came from the New York Times to be the editor of The Philadelphia Inquirer, and it became clear that he was to transform the paper into an ambitious center of American journalism, those of us who were already there watched closely to see who he would bring in to make it happen. Roberts didn't tell us, directly, what he intended, of course. He was much too oblique in his methodology for that. And he knew that showing was far more effective than telling.

So, we tried to read the tea leaves. And none were so important as the talented writers and editors Roberts was able to recruit.

On the editing side, he brought in such exceptional talents as Gene Foreman, Steve Lovelady, David Boldt, and, a little bit later, Jim Naughton. They were giants, and they did transform the paper. One of the early arrivals was a young reporter from The Baltimore Sun. We knew that John Carroll had been a courageous war correspondent for the Sun who confronted the Pentagon over a lack of honesty about the Vietnam War; and that, more recently, John had been the paper's White House correspondent. He was a very accomplished reporter; but why was he coming to the Inquirer as an editor? This was the era of the editor as big personality, and leaders like Abe Rosenthal of The New York Times, Tom Winship of The Boston Globe, and Ben Bradlee of The Washington Post were forceful, charismatic, even at times a bit bombastic. John Carroll was so clearly different: quiet, gentle, gentlemanly, thoughtful and demur about himself and his views. We liked him, liked him a lot, but we were puzzled as to exactly how this young night city editor was going to make his mark.

Roberts' style was not to instruct. He gave direction through what he did — who he hired, who he put in charge of what — and occasionally through the telling of distinctive stories and parables. He told of the blind editor of the weekly in Goldsboro, N.C., who pleaded with the young Gene Roberts to write prose so vivid it would bring a story to life. "Make me see, Gene, make me see," said the blind editor to the young cub reporter. And he told of wanting, as a boy, to take the axe from his uncle's hands and split the wood himself when they went out together at night to get more fuel for the wood-stove. Gene's uncle explained the importance of holding the lantern for the axe-man, and we all understood this as a parable for our role as the editor in service to the writer.

No one understood this message more instinctively than John Carroll, and he became exhibit A in the demonstration of the power of the selfless editor.

Robert's intention was to create a paper that flowed from the bottom up — putting the writers, the photographers, the artists at the center of the action — and was built on an artful conception of the editor as helpmate to the talent — as mentor, guide and facilitator, rather than boss or director or leader in the mold of the big-personality editors of the day. He showed us all how putting the writer, and the story, at the center of everything made a newspaper that could enliven the community dialogue and serve the community interest.

The rest of us watched closely as John quietly, gently guided young reporters on some of the most complicated and ambitious stories the paper had ever tried. The power of this work led The Inquirer into a long era of prize-winning journalism. And, as metropolitan editor, John built a cadre of reporters utterly devoted to him. The rest of us were jealous of the loyalty John garnered, but it was obvious to us why this was so: John treated the writers with the highest respect, and he was patient and painstaking with their work. But, most importantly, he employed his own skill and intelligence to enable them to do work far greater than they had imagined they could do: The editor in service to the writer.

When John moved on to become editor of The Lexington Herald-Leader in Kentucky, and then to edit The Baltimore Sun and the Los Angeles Times, he continued his quiet, gentle, patient work with journalists at those papers. The result was a string of a dozen and a half Pulitzer Prizes under his leadership — 13 in just five years at the Times. He revitalized the Sun, and then the Times, just as Roberts had The Inquirer. Over time, he established himself as the leading newspaper editor of our generation. He became as respected, and beloved, as anyone in his field.

And he became a champion for the kind of committed journalism he practiced. As a member of the board of the American Society of Newspaper Editors, and a founding member of the Committee of Concerned Journalists, and through his association in many other organizations, John preached eloquently about the importance of the kind of commitment to excellence he practiced. And he lamented the evolution of newspaper ownership from families devoted to community and toward large national and multi-national corporations focused on profit, often to the detriment of the communities they served. John noted the power of families committed to journalism and community, like the Taylors in Boston, the Grahams in Washington, the Chandlers in Los Angeles, and the Block Family in Pittsburgh. Over and over, he warned of the dangers to the civic discourse if commitment to good journalism and to community was overridden by the profit motive.

When I was very young, my mother would often tell stories about her father, the book editor Maxwell Perkins, who developed such iconic 20th Century American authors as F. Scott Fitzgerald, Ernest Hemingway and Thomas Wolfe. She told of his powerful belief in the importance of writers and literature, and his utter selflessness in developing the talent he encountered. And she told of his courage in defending their work to colleagues who found it too edgy. As John Carroll and I developed our close friendship during his years in Baltimore and Los Angeles, and I talked with many of the writers he championed, I came to see that he was the newspaper version of the literary ideal that Perkins represented.

John's loss — to a beleaguered profession, to a family that adored him, to colleagues who rejoiced in his company — is a great heartache.