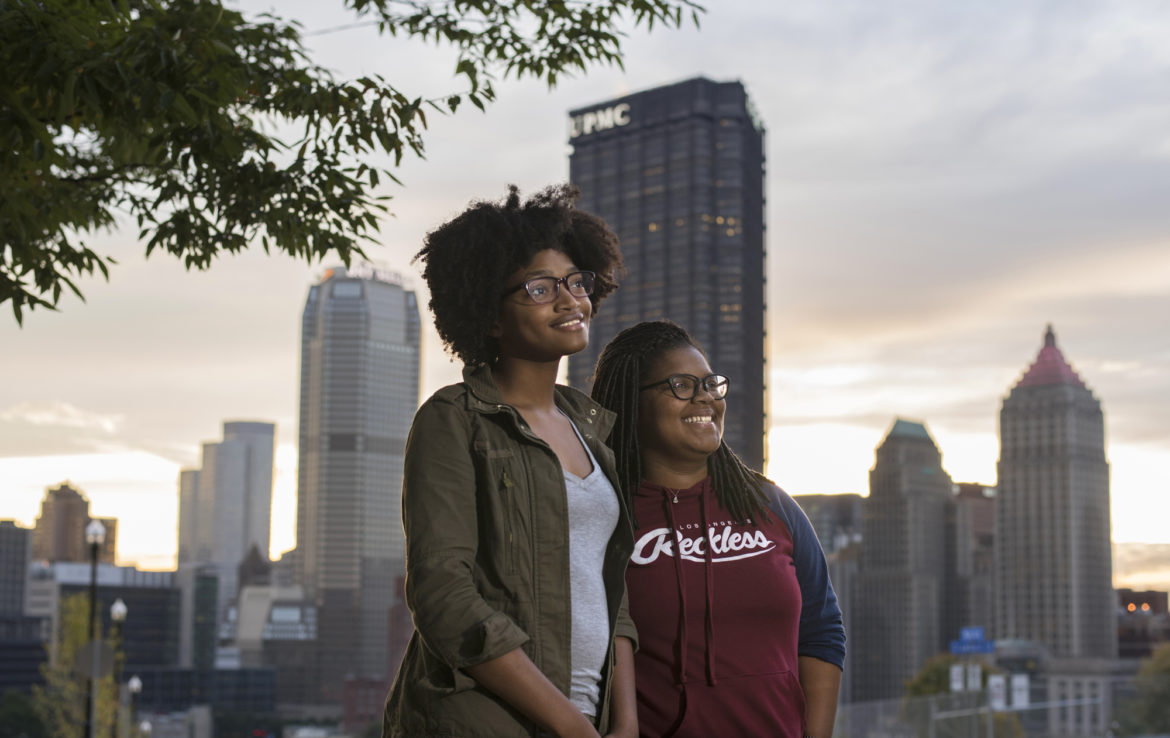 Why does Kelis Campbell feel pressure to work twice as hard as so many others?

She realized it in the seventh grade. Simple reasons: She is black. And she is a woman.

Just basic identity. It influences how she’s perceived in class, what it’s like to go shopping, how she might be punished and what she has to do to succeed.

“Everything we do is kind of like breaking through a door,” said Kelis, who is 16 and in 11th grade at the Barack Obama Academy of International Studies in East Liberty. “Sad to say, I’ve kind of gotten used to it.”

A new report funded by the FISA Foundation and The Heinz Endowments* shows that it’s not mere perception. In Pittsburgh and Allegheny County, institutions like our schools, child welfare and juvenile justice systems treat black girls much differently than white girls, creating massive disparities.

Officials at Pittsburgh Public Schools suspend black girls from school at a rate that's more than three times that of white girls, according to 2013-14 discipline data.

As a TeenBloc student with the advocacy group A+ Schools, Kelis is studying the concept of “pushout,” which refers to how institutions and their policies single out black girls in ways that interrupt their education and increase their likelihood of dropping out.

Black girls in Pittsburgh Public Schools are more than

as likely as white girls to be suspended from school.

At Obama, she says something as basic as getting shushed by a teacher seems more commonly directed toward black girls than the white boys in her class.

“Because they’re good boys or something and they come from a good neighborhood,” Kelis said. “As soon as it’s the flip side and it’s like the black girls making noise, you see how the teacher automatically shuts it down.”

Sarah Brown, program manager for TeenBloc, said speaking out can be rationalized or even applauded as assertiveness or taking leadership — when the students are white.

For black girls, it’s “defiance or disrespect for authority.” And often they are punished when they were defending themselves against some sort of harassment.

Kelis recalls being suspended twice in the first few months of sixth grade. Once for a fight she didn’t start, and another in reaction to being bullied.

Looking back, she jokes about thinking her life would be ruined by a bad mark on her permanent record; she cried and was scared what her parents would say.

But then she told her mom what had happened to her, something she said the administration didn’t bother to hear out.

“It’s just ‘Oh, you got in a fight, you’re suspended,’” said Kelis, who went home both times without being given schoolwork. Ahmari Anthony, a senior at Shady Side Academy, shares her experiences as a young black woman in Pittsburgh with Kelis Campbell, a junior at Obama Academy, during a TeenBloc meeting at A+ Schools in the Hill District. (Photo by Martha Rial/PublicSource)

And then there are dress code discrepancies, where white girls seem to get away with wearing clothes that are seen as more scandalous on a black girl.

“When I’m looking at my white friends, I’m like how did you get in with that?” Kelis said. “Like half of your butt cheeks are out — I’m not trying to be your mom or nothing.”

Dara Ware Allen, Pittsburgh’s assistant superintendent of student support services, said the district is making a deliberate effort to train faculty on implicit bias and to reduce suspensions. Those efforts include a recent $3 million restorative justice grant and evaluation by the nonprofit consultancy RAND Corporation.

The district is trying to make the dress code more fair using feedback from TeenBloc students and is educating teachers on related issues and biases.

While the district reduced suspensions by 53 percent between the 2010-11 school year and 2015-16, Allen said the racial disparity remains.

“We definitely would not draw the conclusion that one racial group behaves better than another,” Allen said.

Not in the country club

Across town, Ahmari Anthony is a senior at Shady Side Academy in Fox Chapel.

As a private school student, she recalls being treated differently since kindergarten.

She was the first full black girl in her class until middle school, not from the “country club” life. “People would say things to me, and then I would pop off on them.”

So she was sent to the principal’s office. A lot.

And then she’d get punished just for talking, while white students got away with worse.

“I was mad at myself for a really long time,” said Ahmari, 17, also a TeenBloc student. “And then I got older, and I realized that I was being treated differently, and I was angry about that. But it was a relief to not be angry at myself.” Ahmari Anthony says she’s been treated differently at school by classmates, teachers and administrators since kindergarten. (Photo by Martha Rial/PublicSource)

He wasn’t aware of any statistics that break down punishment by race at Shady Side Academy.

“It’s obviously a really important question,” Green said. “I don’t think Pittsburgh is alone in terms of those types of discrepancies.”

Efforts to improve include a spring in-service day on implicit bias and faculty discussions about the need to talk with students about Black Lives Matter and police brutality.

“We need to be engaging,” he said. “Saying nothing is not acceptable.”

Ahmari feels like she’s made a choice between education and acceptance. She could leave for public schools in Steel Valley and not be singled out — or condescendingly praised as “articulate” — or she could stick it out with the hope that the stronger academic offerings are worth the sense of not belonging.

Meanwhile, there’s the shared feeling by Kelis and Ahmari that as black young women, they can’t be teenagers like the white girls, who seem to get away with causing a ruckus at the pet store or stacking salt shakers at restaurants.

If it’s them, the reaction is far more stern.

“We have to be like perfectly behaved all the time,” Ahmari said. “Even then, we don’t even get afforded a basic amount of respect or benefit of the doubt.”

*The Heinz Endowments and the FISA Foundation have provided funding to PublicSource.