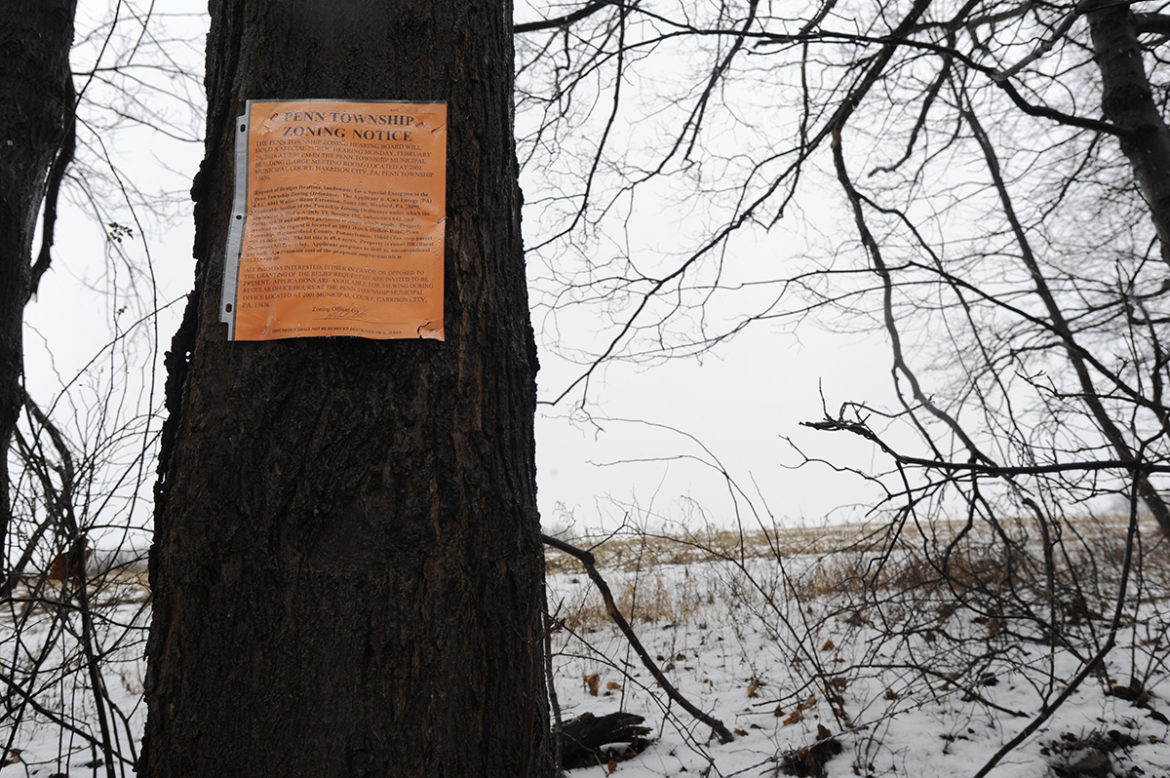 Editor’s note: This story is part of our series Clearing the Air about shale gas drilling in Penn Township. PublicSource has followed the events there since April 2015. We placed air quality sensors at five homes to monitor pollutants near the contested well pad for two months. The data collected are being analyzed. PublicSource will share the results with residents and report on what we found. Sign up for our newsletter to ensure you receive our next story on this issue.

Citing environmental concerns, a zoning board has denied a permit request by a small drilling company to build the second shale gas well pad in Penn Township, a rural-residential suburb about 20 miles east of Pittsburgh.

“The applicant has failed to adequately demonstrate that the drill site operations will not violate the environmental rights of the citizens…” the decision for the Beattie Central Pad-37 states.

Apex Energy, a Wexford-based company, wants to drill 9 wells on the property and has permit requests in with the township for six other pads across the community.

“That's a very broad statement that they would make. That's not a typical statement you'd make for zoning,” said Apex CEO Mark Rothenberg. “We were very disappointed … We felt we put in an extremely comprehensive application that addressed all of their concerns.”

“This is huge for us,” said Gillian Graber, president of Protect PT, a citizens group against drilling outside of industrial areas in the township. The group opposed the pad and hired a Pittsburgh-based environmental law firm to represent them at hearings for the site.

"This is huge for us." -Leader of Protect PT about the decision.

Members testified at the hearing that they were fearful of how continued development in the community would affect their health, how pollution from the site could impact the environment and how an uptick in industrial operations would affect their way of life. (Check out PublicSource’s in-depth story about how this community has dealt with fracking coming to town.)

Rothenberg said company officials and lawyers need to to “digest” the decision and decide if they’ll take it to court, but stressed that he’d like to avoid that and figure out a way to address the board’s concerns. The company has 30 days to appeal the decision, which was made on April 14.

The decision — which is based off of the township’s draft zoning ordinance for drilling — hinges on a section of Pennsylvania’s Constitution that guarantees citizens the right to “clean air, pure water, and to the preservation of the natural, scenic, historic and esthetic values of the environment.”

The law was used in a landmark decision in 2013 by the Pennsylvania Supreme Court that overturned sections of Act 13, the state’s oil and gas law.

That ruling restored the rights of local municipalities to zone for drilling. Previously, the state law superseded local zoning laws and allowed drilling in all zoning districts.

Since the ruling, local municipalities have struggled to figure out how far their authority goes when deciding where gas drilling can and cannot go, as well as other aspects of drilling, such as how far the activity can take place from a house or stream.

Penn Township is operating under a pending zoning ordinance they’ve been working on for more than a year. The ordinance allows drilling across about half the township, but, as an additional protection, requires each drilling permit to go through a public hearing in front of the zoning board to prove compliance.

The ordinance states that drillers have to prove that the drilling site won’t violate Penn Township citizens’ rights to clean air and water and include “air modeling and hydrogeological studies as potential pathways that a spill or release of fluid may follow.”

Apex provided air and water studies that showed the possible risks associated with accidental spills or emission releases at the site. According to the decision, the company did not provide “sufficient satisfactory information” showing how releases from normal gas operations on site (drilling, fracking, flaring) could impact air and water.

If Apex appeals the decision in court, it wouldn’t be the first time they’ve wound up in a legal battle with the township’s zoning board.

After approving a permit for the township’s first shale site last year, Protect PT appealed the decision to the Westmoreland County Court of Common Pleas. The zoning board put a hold on the permit until the appeal could make it through the courts, but Apex sued to start drilling immediately, asserting that they were losing $70,000 each day they couldn’t drill.

The township removed the hold on the permit, and Apex drilled two wells on the site last year.