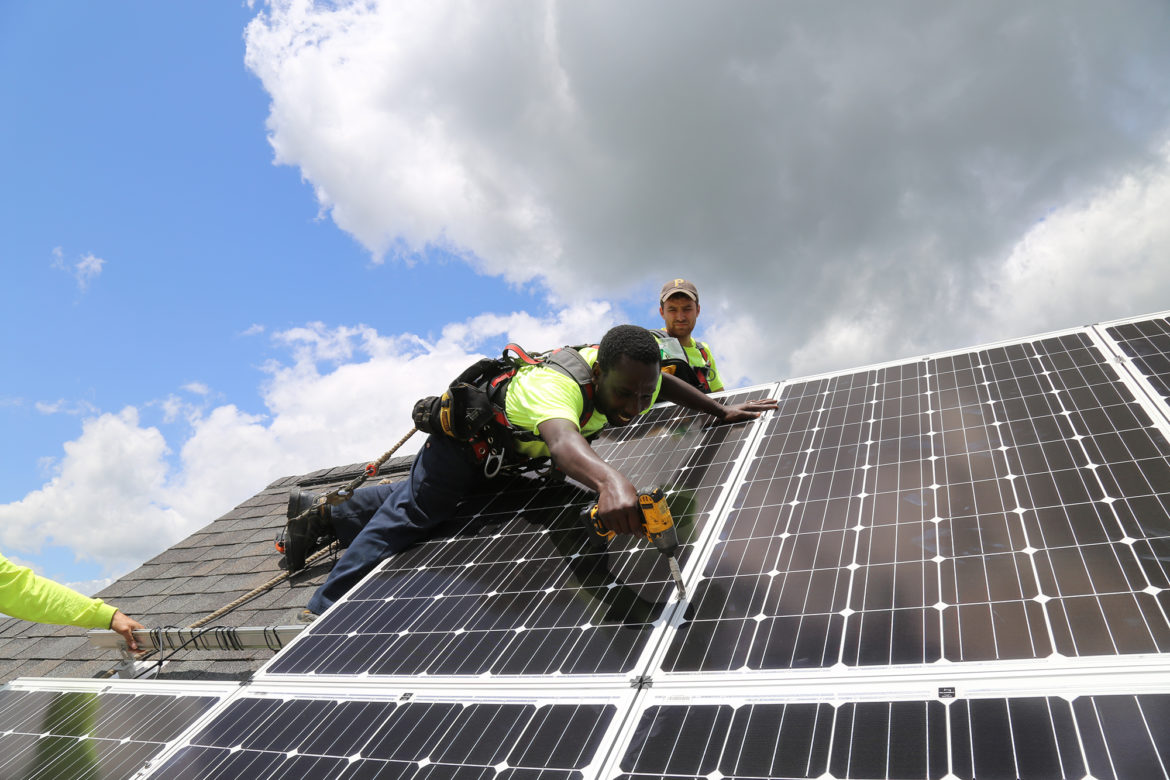 Off a main drag outside of Somerset, Pa., 36 low-income housing units are going up. When they’re move-in ready, the new residents of the Highland Hills housing development will have an advantage many of limited means do not: solar energy.

The rooftop solar panels glint on the tops of the duplexes, representing — above all — savings.

“When we look at trying to make the property affordable and sustainable for the residents long-term, the addition of solar is one of the solutions,” said David Petroni, vice president of business development for the Buckeye Community Hope Foundation, the Ohio nonprofit behind the project. The household incomes at the Highland Hills development will range from $9,000 to $50,000, he added.

Each of the homes will boast its own rooftop solar array, which will generate energy to offset tenants’ electric bills. Once the panels are paid for, they have the potential to supply energy to a home essentially for free.

It’s not usually a priority — or a realistic financial option — for people on the lower end of the income spectrum. Although the Urban Redevelopment Authority of Pittsburgh is developing a low-interest loan for city residents to more readily access solar, solar energy is widely reserved for the middle and upper classes.

Petroni predicts each renter could save about $30 a month on electricity because of the solar installations, a roughly $450,000 project partially funded by a state grant.

In Pennsylvania, a residential rooftop solar system could conservatively save homeowners an estimated $811 every year, according to a PublicSource analysis of data from the National Renewable Energy Laboratory and the U.S. Energy Information Administration.

Low-income households in Pittsburgh spend an average of almost 9.5 percent of their household incomes on energy bills, more than double the average rate citywide, according to an April report by the American Council for an Energy-Efficient Economy and the Energy Efficiency for All coalition.

Even though the price of purchasing solar panels has dropped considerably in recent years, it still requires an upfront investment of tens of thousands of dollars without assistance, like a loan or grant.

The cost can be daunting for many homeowners, but Pennsylvania’s solar policies and the resulting shortcomings in the solar industry here can make the financial hurdle seem practically insurmountable for low-income residents.

“People are either choosing to continue renting their electricity, or owning it,” said Sharon Pillar, president of the Solar Unified Network of Western Pennsylvania, noting that residential rooftop solar panels are generally warrantied for about 25 to 30 years and their owners can save about $15,000 during that time.

“I always say, the cost of doing nothing is going to be more.”

Some Pennsylvanians may not be able to get far enough ahead to ever stop buying their energy each month from power companies like Duquesne Light.

The government doesn't offer realistic incentives for low-income residents in the state to go solar. The federal government offers a 30 percent tax cedit for homeowners who install solar, although those with lower incomes may not be able to take full advantage of this immediately.

According to a federal database of renewable energy incentives, the only one that purports to benefit low-income people is the opportunity to sell credits earned through generating solar energy to companies and suppliers that need them to meet state solar production requirements.

Individuals receive one Solar Renewable Energy Credit, or SREC, for every mega-watt hour of electricity they produce through the rooftop panels. But Pennsylvania has an open border policy that permits companies to purchase SRECs from other states, unlike our neighbors in Maryland, New Jersey, Massachusetts, Washington, D.C., and elsewhere that allow SRECS to be bought and sold only within their borders.

Pennsylvania’s open border policy has led to an oversupply and the SRECs’ price plummeting into “the gutter” since 2013, said Ron Celentano, president of the Pennsylvania Solar Energy Industries Association. That’s the same year that money ran out in a 4-year-old state grant program that was meant to fund solar projects in Pennsylvania, further depressing the market, he added.

SREC prices had been as high as $350, Celentano said. Now, they hover around $14. The level of solar development within a state and the resulting volume of supply can also affect how much or little SRECs are worth there.

It’s a situation that Louise Taylor, whose family installed solar panels onto their Point Breeze home last year for $25,500, considers “unfair.” Over the course of a year, her system produced five SRECs. The average home produces about eight SRECs per year.

“In some states, the value of those SRECs is enough to be factored into whether you buy the system or not,” she said. “You think about that as another potential economic consideration, whereas in Pennsylvania they’re worth so little that you don’t even bother adding them up.”

The SREC pitfall could affect households where every dollar counts more significantly. In some states, those interested in going solar may opt to buy into a community solar arrangement instead.

Pennsylvania, though, does not have legislation to support most projects that would allow people who don’t have rooftop solar to benefit from purchasing a share of a larger-scale project and having the savings credited back to their electricity bills. Fourteen states and Washington, D.C., do have shared renewables legislation, according to Shared Renewables HQ, a site dedicated to advancing renewable energy policy across the country.

Gov. Tom Wolf supports permitting community solar, said Sam Robinson, deputy secretary of policy and planning at the governor’s office, adding that there has simply not been enthusiasm among politicians for passing the legislation this would require.

Net metering, a facet of the community solar strategy, makes it possible for owners of rooftop solar arrays to sell energy back to the established electric grid when they are producing more than they are consuming; they could also purchase electricity when the sun is not out and they aren’t generating as much as they are using. For some people, net metering offsets the full electric bill over the course of a year.

One roadblock to relaxed net metering rules is the belief that, because these customers are paid for the full retail value of the solar they sell back to the grid, they are essentially free riders.

“Those rooftop solar customers are, in effect, not having to pay for a lot of the infrastructure costs associated with the electric grid through the services that they use and other services that the utilities provide,” said John Eick, director of the Energy, Environment and Agriculture task force at the American Legislative Exchange Council [ALEC], a conservative organization that writes model policies for legislators.

This position disregards the benefits that solar provides to the grid, Celentano said, like relieving congestion on the distribution lines and saving on distribution and transmission costs.

In May 2015, Maryland adopted legislation approving community solar, so the Baltimore Office of Sustainability is in the process of setting up projects in the city with a particular emphasis on low-income residents, sustainability coordinator Alice Kennedy said. Those who want to cut down on their electric bills through net metering will be able to “subscribe” to a project and essentially get paid for the energy the project produces.

Pennsylvania homeowners do have the option to participate in a solar power purchasing agreement, which allows a developer to install solar onto their roofs for little or no cost, and sell them energy at a fixed rate that is generally lower than what they would have paid to the local utility. But, under this arrangement, the homeowner does not actually own the solar panels.

Experts say that people living on lower incomes are more likely to employ much cheaper energy-saving techniques like LED lightbulbs and smart power strips that don’t continuously draw power than to invest in solar.

Ben Towne of Greenfield nevertheless took his concept of an energy-efficient home to the next level in 2013 by having solar panels installed.

Because he’s a graduate student, enrolled in Carnegie Mellon University’s Societal Computing program, Towne doesn’t have much federally taxable income and wasn’t able to fully benefit from the 30 percent solar energy tax credit. To pay for the system, he used a loan.

The establishment of long-term, low-interest loans is the primary answer industry insiders have to increase access to solar.

Joe Morinville, president of EIS Solar, the Pittsburgh-based company that’s installing the Highland Hills panels in Somerset, said he’d rather see the government establish a revolving loan fund instead of something like its previous grant program, which created a detrimental boom-and-bust scenario.

He said financing the loans out over longer terms would make it feasible for more people.

“If you can only finance over seven to 10 years, it’s going to increase their electric bill 50 bucks a month to do it, so that’s something a low-income person isn’t going to be able to absorb,” he said.

Even when they’re offered for longer terms, these types of loans often require that homeowners submit credit scores, which may present a roadblock for low-income households.

State lawmakers in 2013 proposed an act to establish a Property Assessed Clean Energy, or PACE program, which would give townships and municipalities the ability to provide property owners loans to make energy-efficiency improvements. The low-interest loans would be paid through the property owner’s tax bill. Pillar of the Solar Unified Network said the program is controversial because it could expose low-income households to debts on their property. It’s been stalled in committee for years.

The Urban Redevelopment Authority of Pittsburgh [URA] is in the process of setting up a $25,000 fixed-rate loan with a 20-year amortization period aimed at financing installation of residential solar panels—the first of its kind in Pittsburgh, said Tom Cummings, the URA director of housing. Although the fixed interest rate has not yet been finalized, the organization is aiming to have the loan available by the fall.

“People that have means can probably do this through lines of credit against their home…but for people that don’t have much equity in their house, this would be a way to do that...” Cummings said. “It could be a pilot program that could grow into something more substantial.”