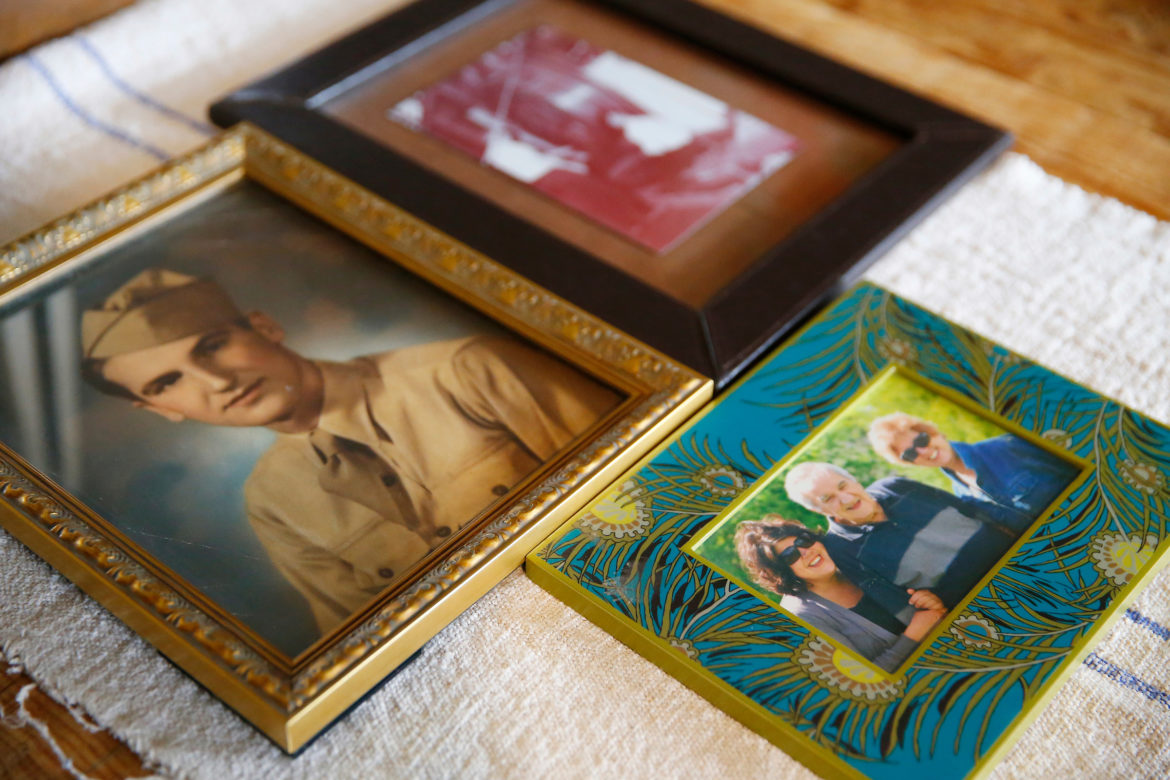 Photos of Chris Rosselot’s grandfather and family members are shown on the dining room table in the North Side. (Photo by Jared Wickerham/Pittsburgh City Paper)

None of us had any idea what to expect when we entered the courtroom for my grandfather’s competency hearing, least of all him.

At 81, he was ordered to leave the home he had chosen with his daughter and forced to return to a wife he intended to divorce, with no rights.

Before our family nightmare in 2006, I had little idea of the power judges wield over the fate of elderly Pennsylvanians. With the stroke of a pen, my grandfather was deemed incapable of making his own decisions and taken from his family.

Reform could keep other families from knowing our pain, but that hinges on the legislature enacting necessary court reforms and the election of judges who ensure the guardianship process is fair and focus on what’s best for older Pennsylvanians and their families. With 39 candidates running for nine open seats on the Court of Common Pleas of Allegheny County, this is an issue that candidates and voters should carefully consider both before and after the election.

My maternal grandfather, Steve Gornick, was an intelligent, independent man with a deep love for his family. Taught to read by his mother at a very young age, he quickly outgrew his one-room schoolhouse in Penn Township in Butler County, where the teacher had him assist the older students with reading and mathematics.

He left the family farm at age 14 to work in a foundry in Butler and escape an abusive father. He joined the army during World War II after his mother changed his age on enlistment documents.

After the war, he settled in Erie, started a family with my grandmother Ruth and began his career as an electrical and mechanical engineer for General Electric and later Electric Materials. Using his intellectual capacity and grit, he helped discover mathematical theorems that advanced his field. And when Ruth passed away in 1976, he rose to a new challenge, raising their two daughters alone. 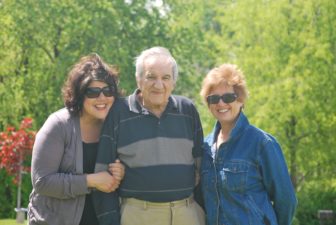 Growing up, Grandpa Steve was a huge part of our lives. We visited him and his second wife every Christmas, and he often traveled to see us. No matter where we were living, he made it to school functions — graduation ceremonies, baseball and hockey games. He especially loved visiting our family when we lived in Colorado, taking advantage of the outdoor activities like cross country skiing, hunting, golfing and hiking.

In 2003, my parents moved from Denver to Pittsburgh to be closer to home. Grandpa was almost 80 then, and during the last couple of visits, we’d noticed his memory slipping a bit.

Two years later, his wife contacted my parents to coordinate an open-ended stay for Grandpa Steve. She presented it as an opportunity for her to get some time to herself. During this visit, grandpa brought up constant arguments he and his wife had regarding his will — and his desire to make his daughters his primary beneficiaries.

As grandpa’s visit went on, he became more resolute about leaving his wife, transferring funds from a joint account and consulting with an attorney in Pittsburgh to discuss marital separation. When his wife became aware of this, the legal nightmare began.

On Dec. 15, 2005, Grandpa Steve’s wife filed a petition with the Court of Common Pleas of Erie County to declare my grandpa incapacitated and to appoint her as guardian. She requested additional immediate relief, including the transfer of custody of grandpa to her and the return of the joint account funds previously removed.

The funds were quickly returned, but despite our constant worry that grandpa would be taken away, he remained in our care until the hearing. My mom, with his wife’s blessing, had a full mental evaluation of her father performed at the well-respected UPMC Senior Care - Benedum Geriatric Center. My mom and aunt filed a counter-petition stating that it was Grandpa Steve’s wish to remain in Pittsburgh. While grandpa exhibited symptoms consistent with dementia, and assistance was necessary for certain daily activities, we believed he could make his own decisions, and he was adamant that he stay with us.

On Jan. 31, 2006, we rode the two hours north to Erie in silence. We had no idea what to expect during grandpa’s hearing. Judge Stephanie Domitrovich had a reputation for being a wild card on the bench, and grandpa's fate was in her hands. Our attorneys assured us that legal precedent was on our side. Under Pennsylvania law, the “emergency guardianship” petition had expired, and she had not initiated an extension.

While the courts wield life-changing power over families, I’m sure my grandpa never thought a judge would decide his fate during his final years.

Judge Domitrovich seemed serious as she entered the courtroom. The attorney for Grandpa Steve’s wife called expert witnesses, including a neighbor who had a degree in social work, though she had never evaluated Steve. Neither our counsel nor grandpa’s court-appointed counsel had had an opportunity to depose the witnesses prior to the hearing. Testimony painted my grandpa as incapacitated and his wife as both loving and in the best position to care for him. Throughout the proceedings, the judge remarked that the testimony was taking too long and that they only blocked an hour of time on the court calendar.

When it was over, the court granted his wife full guardianship, despite my grandfather taking the stand and saying without reservation that he wanted to stay in Pittsburgh. In closing, the judge said grandpa’s wife could take him wherever she wanted for medical care. “He doesn’t have to go to the Benedum Center,” she said. “[Go] wherever you want him to go. He’s yours.”

My grandpa, who had shown grit and autonomy his entire life, had it all ripped away.

A few months after that decision, we were back in Domitrovich’s court when his wife — and now guardian — failed to file financial documents after withdrawing thousands of dollars from Grandpa Steve’s savings and cashing out his GE stock. The best we could hope for was that the judge to instruct that the funds be returned, which she did. Eventually, Grandpa Steve’s wife moved herself into a luxury assisted living facility and moved grandpa to a county nursing home. Because of her guardianship status, there was no obligation that we be notified of these decisions, and we found out through another source.

All we could do was request court-appointed visitations, which we did, and report any concerns about mistreatment to the Erie County Department of Welfare.

Grandpa’s case was in Erie County but petitions like this are decided across Pennsylvania every day.

Demographically, Allegheny County is one of the oldest counties in the country, and according to the Administrative Office of Pennsylvania Courts, there are 17,696 people living under guardianship in Pennsylvania, including elderly Pennsylvanians and other incapacitated individuals. With nine seats open on the Allegheny County Court of Common Pleas, judges running for election could sit on the Orphans’ Court, where petitions for guardianship are filed and heard.

Since my grandfather's death in 2011, there has been progress — but not enough.

In 2013, the Pennsylvania Supreme Court created the Elder Law Task Force to address the growing issues involving guardianship elder abuse cases in the courts. The task force has recommended more than 100 administrative and legislative remedies to improve how older Pennsylvanians interact with the courts and promote elder justice. In 2015, the Office of Elder Justice [OEJC] was created to assist the state Supreme Court in the execution of the Elder Law Task Force recommendations.

One change already implemented is the requirement for a standardized deposition form, which is intended to improve the quality of information available from expert witnesses. 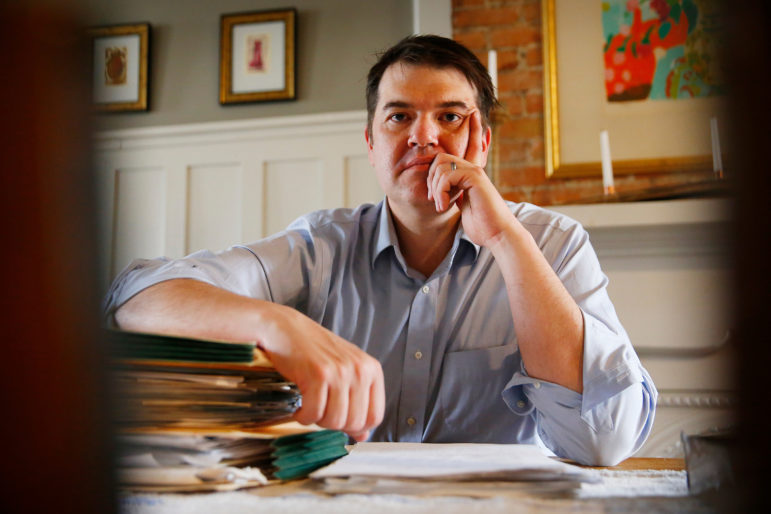 Chris Rosselot poses for a portrait in the North Side on March 24, 2021. (Photo by Jared Wickerham/Pittsburgh City Paper)

In 2018, the U.S. Senate Special Committee on Aging, now chaired by Sen. Bob Casey, Jr., D-Scranton, issued a guardianship report that explains other reforms such as creating court-community collaborative measures similar to the child welfare model.

Locally, state Rep. Dan Deasy, D-Westwood is the prime sponsor of HB 564, which would permit local area agencies on aging [AAA] the power to investigate the exploitation of individuals by their power of attorney. Other local lawmakers, including Rep. Summer Lee, D-Swissvale, are sponsors, and the legislation is currently pending in the Committee on Aging and Older Adult Services, where freshman Rep. Jessica Benham, D-South Side, is a supportive member.

Last year, State Sen. Art Haywood, D-Philadelphia introduced SB 23, which proposed  significant reform including changing the court for the case to be in the area where the incapacitated person resides, calls for fiduciary examinations by the court for appointed guardians and independent medical evaluations for guardianship hearings. These reforms could have benefitted my grandfather, as we tried to have the hearing moved to Allegheny County where he was staying, and he would have received a proper independent medical evaluation to determine his mental capacity.

With limited Republican support, this legislation stalled in the Judiciary Committee.

The lack of legislative action has frustrated some members of the State Elder Law Task Force because without funding from the state legislature, the burden falls on county courts, who  remain largely idle on task force recommendations. In the short term, it is critical to educate voters on electing judges that have the experience and the judicial temperament necessary to handle emotional and complex cases. Moreover, there is nothing precluding judges from using family mediation for guardians and their families — particularly in cases with blended families.

Although it has been a decade since my grandpa passed, not a day goes by where I don’t think about his life and the tragedy of his final years tangled in the guardianship system. After his wife passed away, we were able to petition the court to allow grandpa to live with us in Pittsburgh.  We were fortunate enough to share a few extra moments with Grandpa Steve — though by then he was in the throes of dementia and would not remember them.

I am heartened by guardianship reforms, but more needs to be done to protect our most vulnerable seniors. With so much power over our families, it’s crucial that judges educate themselves on the issues impacting older Pennsylvanians and that voters carefully consider those issues when choosing candidates. While the courts wield life-changing power over families, I’m sure my grandpa never thought a judge would decide his fate during his final years.

Chris Rosselot is a public policy professional and politically active resident of the North Side. Chris is a former regional representative for U.S. Senator Bob Casey, D-Scranton. He can be reached at rosselotchris@gmail.com.