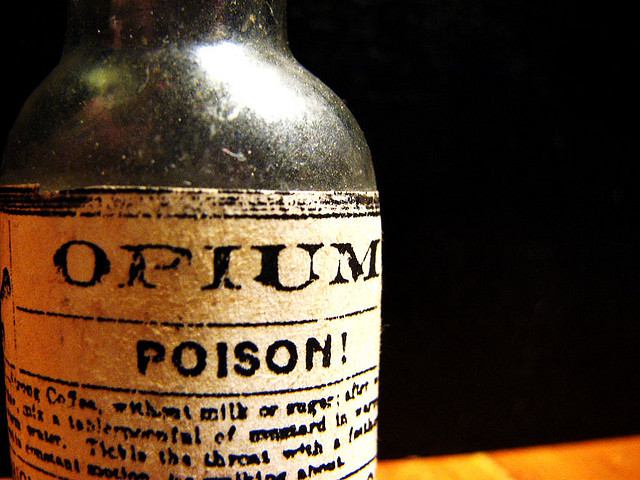 Newspapers across the country have chronicled the destructive toll of heroin abuse in their communities. But as the Albany Times Union points out, many of those front pages might not have looked too different 100 years ago.

Back then, police were cracking down on a “local scourge” of opium dens, the story said. And while heroin has now spread to affluent suburbs, abuse of the drug is by no means a new problem.

In a "spectacular raid" by Albany police at 45 Dongan Ave., Goldie Miller was charged with drug trafficking and five vagrant addicts were also arrested after the cops seized from an "opium den" two bottles of heroin, seven bottles of morphine, several packages of cocaine, opium and hypodermic needles and scales.

The drug bust made front-page news in the Times Union. The story was published on Aug. 14, 1914.

The present-day spike in heroin use is often blamed on earlier abuse of prescription painkillers, and a law enforcement crackdown that made those opioids more expensive and harder to find.

In past decades, heroin was seen as an urban drug.

When Colonie Police Chief Steve Heider started out 41 years ago, he said heroin was being dealt “on a few urban street corners” to men in their 30s and 40s.

"This time around, it's all over suburbia and it's killing teenagers,” he told the Times Union.

In Pennsylvania, drug overdoses killed more than 2,200 people in 2011. The Centers for Disease Control does not break those overdoses down by drug type, but many public health and law-enforcement officials identify heroin as the most prevalent killer in their communities.

In the early 1970s, New York turned to tougher punishment to choke off heroin streams.

Stopping the problem, he said, also will require collaboration across the community, including with the pharmaceutical industry.

Those fighting to save lives in the past are still fighting as heroin takes hold of younger, more suburban populations.

In the 1960s, heroin was described as "a cancer" on predominantly poor and minority inner-city neighborhoods of Albany, Schenectady and Troy. A young street priest, the Rev. Howard Hubbard, recently retired bishop of the Albany Roman Catholic diocese, founded Hope House in 1967 in Albany's South End in response to what was then being branded a heroin epidemic.

Hope House is preparing to open a $4.2 million facility in direct response to the spread of heroin use among adolescents.

Lawmakers in Pennsylvania this month responded to the heroin resurgence by passing legislation to increase access to naloxone, an antidote to overdoses. If administered during an overdose, the drug renders heroin and opioid painkillers ineffective.

The bill, which lingered for months in the Pennsylvania House of Representatives, also gives witnesses to an overdose protection from being prosecuted for some crimes.