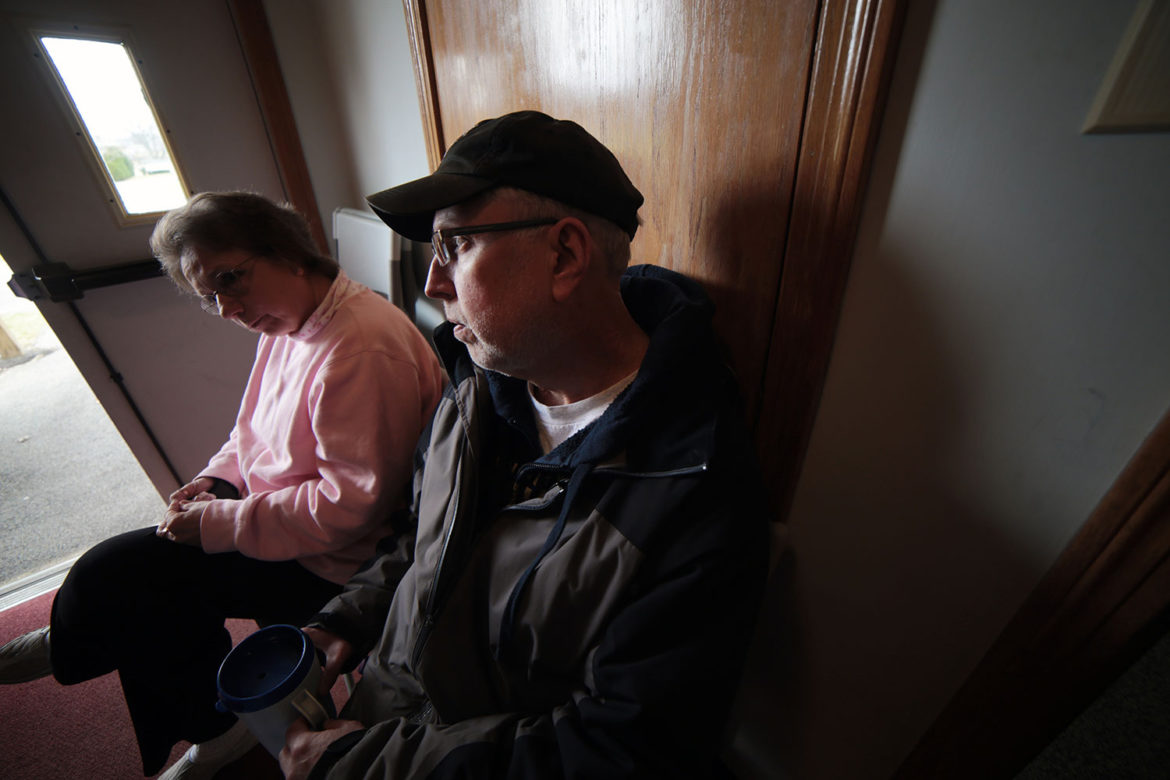 For two years, a Presbyterian Church near hard-to-pronounce Connoquenessing Township, Pa., has been a bank — a water bank to be precise.

The church distributes water to 34 families whose wells went bad around the time hydraulic fracturing started in the region. The coincidence can’t be proven, but residents of the Woodlands, a poor rural community in the township, said they can tell by taste, smell, color and skin reaction that their water hasn’t been right.

The neighborhood received a lot of press back in 2011 and 2012. Documentaries were made. Reporters from around the world wrote stories. But as the years went on, the press faded.

It all started in early 2011, when people noticed their well water began tasting bad and smelling like “rotten eggs” and “burnt plastic,” residents said. The water turned a murky orange color and dark sediment floated in it.

Some people even got strange rashes. Others threw up. Animals stopped drinking the water. Eventually, many people in the community stopped, too.

At the time they blamed “frackers”— companies searching for shale gas — that had drilled several natural gas wells next to the community. For a while, Rex Energy, a main driller in the area, provided drinking water to residents who complained their water was tainted.

But water testing conducted in 2011 by the Pennsylvania Department of Environmental Protection and Rex Energy showed that pre- and post-drilling samples didn’t differ enough. Both Rex and the state concluded that the contamination was not caused by fracking, and the driller didn’t have to provide water to the community.

The DEP received 398 complaints alleging oil or natural gas drilling polluted private water wells in 2013 in Pennsylvania compared with 499 in 2012, according to an analysis of state records by the Associated Press in January. There have been at least 106 confirmed cases of well-water contamination since 2005.

To date, no one knows for sure what happened to the water at the Woodlands.

Some residents are still angry and blame the drillers; others seem to have accepted life without clean water and no longer point fingers.

The community is considered private, so neither township, county or state are under any obligation to provide public water to residents. The Woodlands residents have private wells, and Pennsylvania is one of only a few states with no standards regulating well water. Your well, your problem.

In early April, PublicSource and 90.5 WESA reporters visited the water bank at the White Oak Springs Presbyterian Church a few miles away from the Woodlands.

Behind a pretty, white-picket fence and through a set of red double doors sits 400 gallons of Crystal Pure water jugs packaged in cardboard boxes stacked five high in a room resembling a nursery.

Pastor Lee Dreyer arrives shortly before 10 a.m. to set up. He and several volunteers run the water bank every Monday for two hours.

Dreyer is quick to point out that he doesn’t get involved in what he calls the “politics” of what’s happened to the people of the Woodlands.

“I have to be careful. There are members of my congregation who are for fracking,” Dreyer said. “I’m only here to help our neighbors. That’s the role the church should have.”

Rosemary Smith walks in with her morning coffee, bundled in layered pink and white cotton sweaters to fight the chill. She volunteers at the bank every week.

“It's just terrible,” Smith said. “Can you imagine living out of a bottle for three years?”

A few minutes behind Smith comes Janet McIntyre, a Woodlands resident who has become the face of her community’s struggle throughout the years. She runs the water bank with Pastor Dreyer.

“You’re a pastor? Oh, please pray for me,” McIntyre jokes.

“Oh, I’ve been praying all along for you, Janet,” Dreyer laughs.

McIntyre and her husband Fred are considered lucky: They have a water buffalo — a large storage tank for water — paid for by another local church. There are only a few buffalos in the neighborhood.

Dreyer recalls when the water first went bad: “I remember Fred came here; he said, ‘Look at this.’ He pulled his sleeves up and it looked like he was sunburned. He said, 'I just washed my hands.’”

McIntyre says she’ll only answer questions about the water bank and what it’s like living without clean water. She won’t talk about drilling because the McIntyres are the lead plaintiffs in a lawsuit filed last year against Rex Energy for the alleged contamination of their water wells. Eight other Woodlands families are involved in the lawsuit.

“This is our first client,” Dreyer said (he refers to all the people who pick up water as “clients.”)

Shelley Carlson, a young mother of three, backs up her SUV. Smith hands her a clipboard; she signs her name and how much water she needs. Today she’s picking up for her family, her brother and her neighbor whose car conked out. Total load — 60 gallons.

While Smith handles the paperwork, Dreyer and McIntyre stack the cardboard boxes, which hold 6 gallons each, onto a metal dolly and wheel it to Carlson’s car.

Before the water bank was created, getting water to the Woodlands was disorganized. Dreyer and other volunteers used cash donations to buy out shelves of distilled water at Giant Eagle supermarkets. They hauled the jugs in pickup trucks down the Woodlands’ unpaved roads. Now, Water for Woodlands has a bank account, nonprofit status and a treasurer.

“At our height we probably had about $15,000,” Dreyer said. “When we first started off there were some really generous, large contributions.”

But those big checks have dried up. “We've been getting the smaller ones, about $25. That's very helpful, but we need the big ones,” Dreyer said.

It costs about $400 for water each week. Dreyer estimates the bank has spent around $30,000 total on water.

Carlson and her husband bought their Woodlands house in 1997 when they first married. Carlson said their well water has always been bad, but has gotten worse the past few years.

“We could bathe with it, but I wouldn’t drink it, no, never drink it,” Carlson said.

Asked what she thinks caused her bad water: “I have no idea. I don’t think anyone wants to take responsibility.”

As for moving, that’s impossible, she said. Her husband passed away two years ago (from causes unrelated to the water) and she’s taking care of three kids on her own.

“I don’t have the money to move,” she said. The bad water “is just part of life.”

Her car sags under the weight of the water as she pulls away.

“Now, this man had some of his animals die,” said Smith as Russ Kelley backs his blue pickup truck up to the red double doors.

Kelley and his wife, Connie, walk into the bank. Connie signs the clipboard as Dreyer and McIntyre start their routine: Box after box hit the bed of Kelley’s pickup with hard slaps.

“Undrinkable,” Kelley said of his water. He’s lived in the Woodlands on and off for 31 years.  He said the water went bad five or six years ago. He, his wife and two adult daughters don’t drink the water, but they do bathe in it.

Kelley said he knew something was wrong with his water when his rabbits stopped drinking it and died of thirst.

“When an animal stops drinking water, I sure as hell ain’t going to drink it,” he said.

Who does he blame for his sullied water? “I blame the people punching all the [gas] wells,” he said.

Although many Woodlands residents blame nearby fracking for their bad water, there’s still no proof.

There have been 15 drilling pads built and 65 horizontal wells fracked within a few miles of the Woodlands since 2009, according to John Stolz, a Duquesne University microbiologist who has been testing the community’s water for years.

The results of water testing from 2011 to 2013 show it’s likely a mix of old coal mine pollution and Marcellus Shale gas drilling that has contaminated wells in the Woodlands, Stolz said.

The team then tested well water from 33 homes. The research is funded by the Heinz Endowments and the Colcom Foundation. (PublicSource receives funds from these foundations.)

The study’s main finding shows water wells with high levels of manganese, a chemical associated with legacy coal mines. Stolz said it looked like the community was built over abandoned coal mines and an old gas field, and it’s possible that high-pressure fracking released contaminates from the old mines and conventional gas wells.

He said monthly water tests during the course of the study showed water quality varied month to month, in part because wells vary in depth, ranging from 62 feet to more than 900 feet, which means they likely pull water from different places.

That’s a problem “if the DEP or a company goes in and takes just one water sample,” he said. “Is that really representative of the water quality of a particular well?”

Thirteen out of 20 wells the team tested for hydrocarbon gases detected methane, four had ethane and one showed traces of propane, propylene, and butane, suggesting a thermogenic source, which could be from shale gas, Stolz said.

More tests for gases, chemicals and salts associated with Marcellus Shale drilling need to be conducted on more wells in the community to determine if the contamination could be coming from nearby drilling, he said.

“I just want to be able to turn the spigot on without fear of something that makes life go too damn quick. Life is quick as it is,” Kelley said.

He slams the gate of his pickup truck and drives away.

One of the last clients of the day is Dennis Higgins. He and his 17-year-old son, Dennis Jr., roll up in a maroon Jeep.

“I’m picking up for me and my in-laws,” Higgins said. “My in-laws are handicapped so I got to do this every week.” He’s getting two weeks of water for all of them — 80 gallons.

An idea surfaced a couple of years ago to hook up the community to an existing water line Rex Energy uses for its fracking activities. After it’s finished with it, the driller said it would hand over control of the line to the Pennsylvania American Water Company, a local public utility.

The plan would have required Woodlands residents to create an association to raise money to help pay for the project. Many residents weren’t on board with it because of the costs, which could have been in the tens of thousands of dollars for the community to get the distribution center built and install pipes to homes.

“They want us to start an association. Are you kidding me? How can we do that? We have no money,” Higgins said.

Higgins is also part of the same lawsuit against Rex Energy. He said he’s not out for millions, he just wants what’s owed to him for his water disruption. He’s one of the people with a water buffalo, which requires a lot of maintenance, he explains.

Higgins and his son drive off in the Jeep. The back bumper hangs inches from the ground from the water’s weight.

Right now there’s no foreseeable end to the Woodlands water struggles or the water bank that eases them. It had been a slow day at the church bank, only a handful of clients. That’s always a good thing, Dreyer said. It means there will be more water for next week.