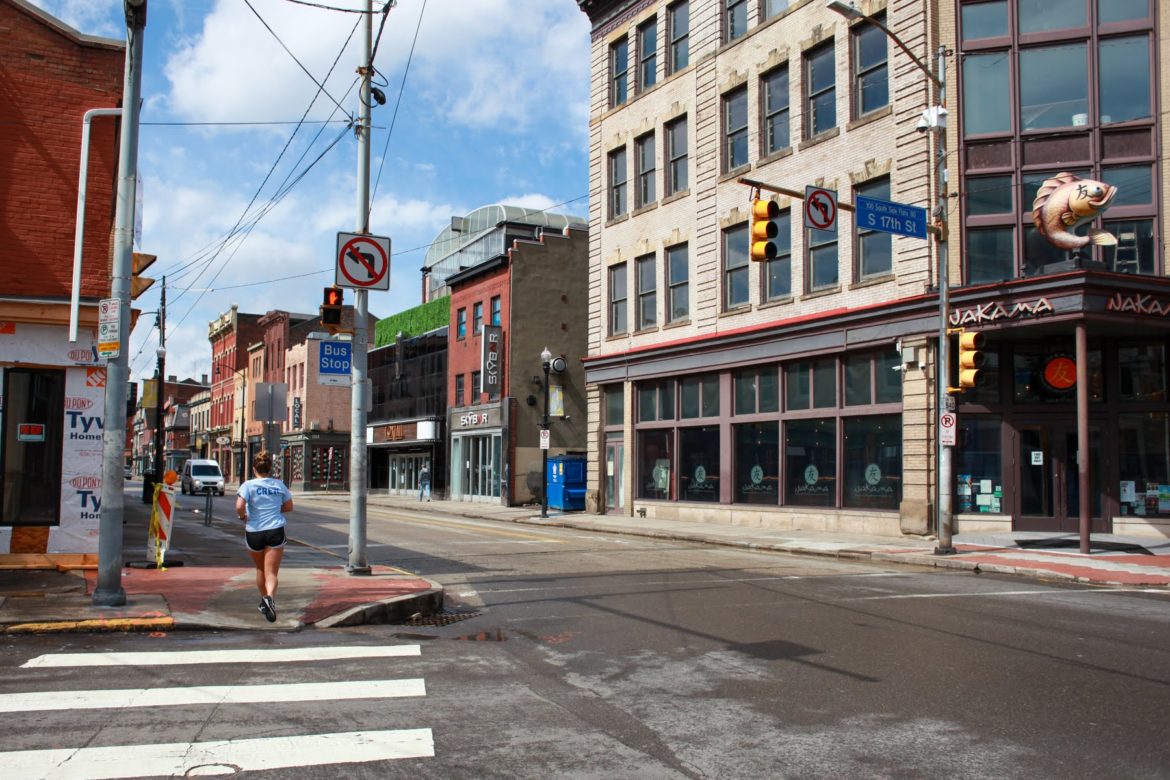 A woman jogs along East Carson Street in the South Side on March 20. (Photo by Kimberly Rowen/PublicSource)

On Friday, May 1, Gov. Tom Wolf announced 24 of Pennsylvania’s 67 counties will move from the red to yellow phase in the state’s three-phase matrix for restrictions in response to the COVID-19 pandemic.

In an interview after the governor’s announcement, Allegheny County Executive Rich Fitzgerald said he wasn’t aware population density was a concern. “I was actually a little surprised. I hadn’t heard that before,” he said.

Fitzgerald said he was glad, however, to hear the governor describe Southwestern Pennsylvania as being close to changing its status. Fitzgerald noted that “even with the urban density we have,” Allegheny County has remained well within the criteria Wolf outlined earlier this month, which required counties to have fewer than 50 daily new cases per 100,000 people throughout a 14-day period before moving to a yellow status.

The counties that will move to yellow, all located in the northwest and north-central regions of the state, can begin easing some restrictions beginning midday Friday, May 8. Businesses must be able to operate within current guidelines for social distancing and avoiding large gatherings.

“[We] have many businesses and other activities reopening with reengineered business models,” Wolf said. “They must continue to abide by the underlying message of yellow — proceed with caution.”

Businesses that cannot allow for social distancing, such as gyms, theaters, restaurant dining rooms and casinos, must remain closed.

In making this decision, the administration considered such factors as rate of infection within a population area, population age and density, and hospital capacities, as well as a county’s or region’s ability to conduct testing and contact-tracing, among other factors.

Wolf cited a statewide stabilization in the number of new cases of COVID-19, including some areas with few or no cases, as well as confidence that some regions have the ability to provide that testing and contact tracing. Contract tracing is, Levine said, “a public health protocol used in every disease investigation,” through which community health nurses and county and municipal health departments track people who test positive for COVID-19. They also investigate and monitor any contacts those who test positive have had with other people.

The governor emphasized that outbreaks of COVID-19 are still possible within yellow areas, and the administration would consider moving a county back to a red designation if necessary. He noted the need to continue the practices of social distancing, wearing masks, teleworking where possible and avoiding large gatherings. These, he said, remained counties’ best means of fighting the virus.

Wolf said that an area’s ability to conduct tests and contact tracing also factored into today’s decisions. “We’re somewhat limited by what we can do. To the extent that folks in the southwest can help in this process, we can go faster rather than slower,” he said.

“I think we’re in a pretty good place there,” Fitzgerald said, citing the county health department’s current contact tracing efforts, “along with testing and along with some of the other metrics that are part of all the strategy of going from red to yellow and then hopefully to green.”

According to an email from Fitzgerald’s office, the Allegheny County Health Department has eight to 10 staff members currently conducting contact tracing and can use other staff as needed. Staff are advising people who have tested positive on how to quarantine and calling people with whom they have come into close contact. The department also has 34 University of Pittsburgh Medical School students assisting with case investigation and follow-up.

"...a measured, logical evidence-based way, is the right way to proceed.”

The governor’s administration shared background on the data that drove its decision making. Using a Risk-Based Decision Support Tool, in partnership with Carnegie Mellon University, the administration worked to “strike a balance,” according to a statement released by Wolf’s office, between minimizing health risks and enabling certain aspects of the economy to begin operating again, within stated guidelines.

When asked by a reporter if employees would have any recourse if they felt they could not return to work for fear of unsafe conditions, Wolf said he felt businesses would have incentive to “do everything to give his or her employees the confidence to come back to work. ... If [employees] don’t feel safe coming back to work, they’re not going to come back.”

The statewide stay-at-home order began on April 1. During that month, the state collected only about half of the revenue anticipated — $2.2 billion of a projected $4.2 billion — according to a statement by Revenue Secretary Dan Hassell. Hassell attributed this shortfall mainly to an extension of tax deadlines during the COVID-19 pandemic. Still, $395.3 million of the April shortfall resulted from the pandemic-induced shutdown, according to Hassell.

“We took a very measured, deliberate approach to closing the state down, county by county,” Wolf said. “As we reopen, we’ve done it county by county. We’ve also opened businesses all across the state, starting right from the start with essential business ... but I think the way we’re doing this ... a measured, logical evidence-based way, is the right way to proceed.”

Mark Kramer is a freelance writer based in Pittsburgh. He can be reached at mark@mnkramer.com.