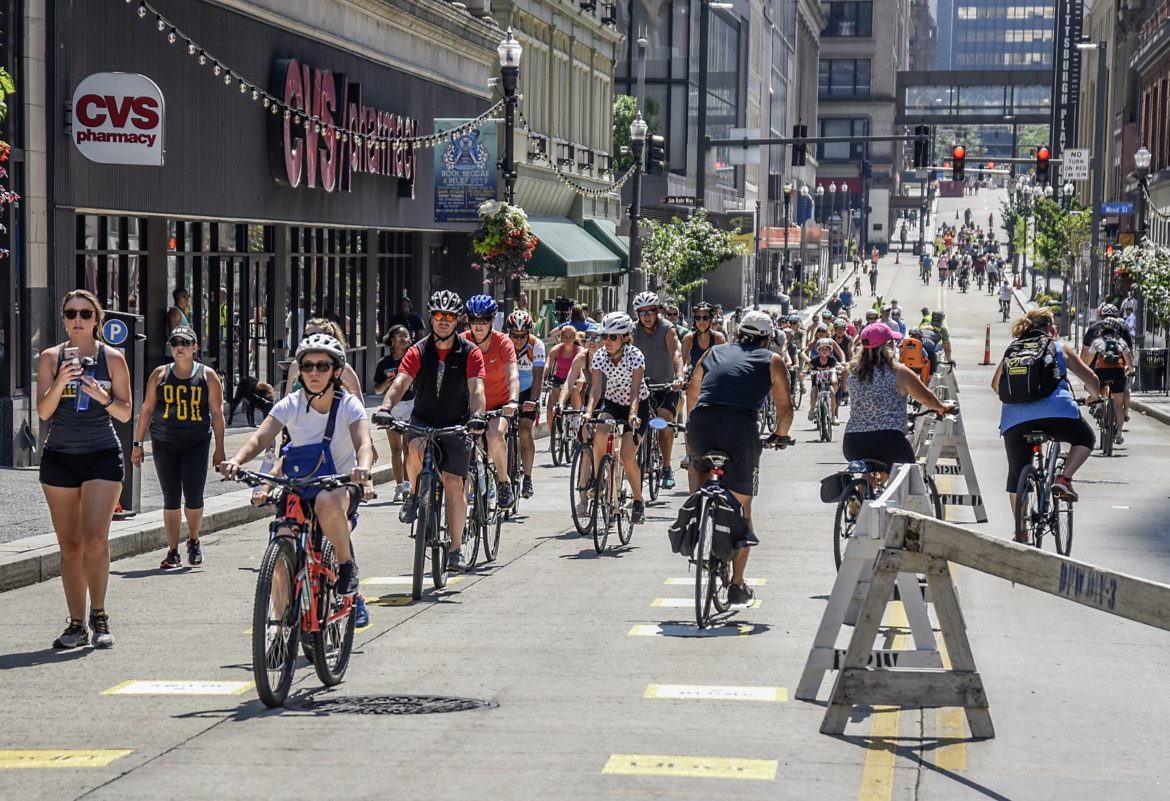 Thousands of bicyclists were cruising along carless Forbes Avenue, East Carson Street and across the 10th Street and Birmingham bridges on the last Sunday of July.

The nonprofit BikePGH had organized an Open Streets event, and for four hours, a route through Downtown, the South Side and Uptown was taboo for cars.

Scott Bricker, executive director of BikePGH, himself riding a Dutch cargo-bike, was visibly pleased with the steady flow of bicycles. “Who knew so many Pittsburghers had a bike? They should use them more often.”

The day after, BikePGH estimated that a little under 20,000 bicyclists had participated in the last Open Streets event in 2019.

Over the years, the City of Pittsburgh has been supportive of cycling. Pittsburgh Mayor Bill Peduto, who’s been pejoratively called “Bike Lane Billy,” wants to get more residents out of cars and on bicycles. “A 21st century city is a multi-modal city,” Peduto said in a 2017 debate during his reelection campaign. “It is a city that is designed for cars and bikes and pedestrians, and public transit, and not simply the automobile. That’s 1950s.”

Pittsburgh’s Complete Streets Policy, adopted by city council in November 2016, states that a “robust, efficiently operated and well-connected transit, pedestrian and bicycle system is essential for the improvement of public health, safety, economic growth, and quality of life for all residents…”

The Complete Streets Policy also strives to create transportation equity for Pittsburgh’s most financially vulnerable households, a quarter of which do not have access to an automobile.

This winter, the Department of Mobility and Infrastructure [DOMI] is planning to publish on its website the draft of a plan that strives to expand the city’s bicycle infrastructure – protected bike lanes, trails, regular bike lanes and shared lanes – from 60 to 180 miles.

The Healthy Ride bike-share program is also expanding in the city. In October 2019, the nonprofit operated 113 bike stations with a total of 650 bicycles throughout Pittsburgh. The plan is to open 17 more stations in 2020. The number of available bikes will stay the same.

Some residents embrace bikes as transportation available to everyone. Others see it as an investment that benefits a small part of the community, while other issues in their neighborhoods go unaddressed. Will the policy changes and abundance of bicycles translate to more Pittsburghers riding bikes, and will Pittsburgh’s neighborhoods benefit equally?

The city’s latest climate action plan calls for the percentage of commuters who mainly use their bikes to grow from the 2% in 2017 to 10% in 2030, as measured by the U.S. Census Bureau.

How can Pittsburgh meet that goal?

“We should design our neighborhoods and streets to put pedestrians, bicyclists and transit users first, then attitudes will follow,” Bricker said.

So far, it’s unclear whether the expansion of the bicycle infrastructure in the past few years has motivated many more Pittsburghers to get on a bicycle. 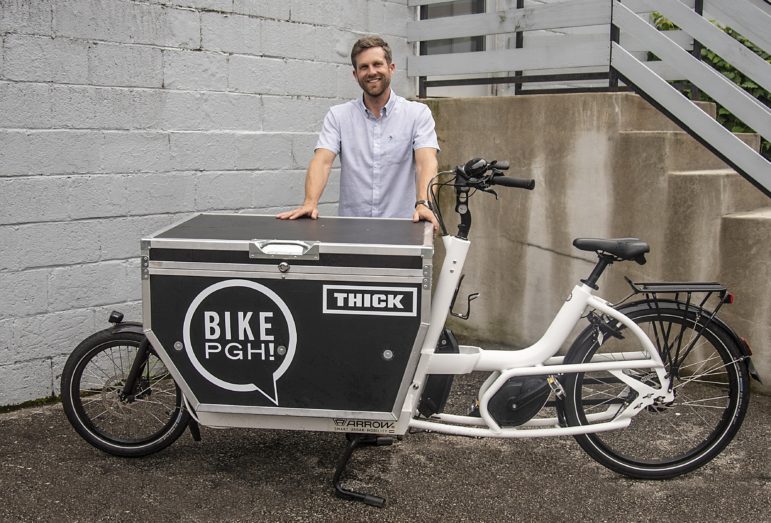 The best available data on bikes come from the American Community Survey [ACS]. The ACS data indicate that between 2009 and 2017 the percentage of workers in Pittsburgh that mainly commuted by bike grew from 1.1 to 2%.

Bricker said he doesn’t think the ACS data tell the whole story because it doesn’t count trips that are not to a workplace, nor any trips beyond primary modes. “So, if I ride my bike to work twice a week, but I drive three days a week, I’m a driver in the survey.”

The Make My Trip Count survey, a voluntary survey of Pittsburgh residents from the Green Building Alliance, indicates that 4.5% of the respondents regularly rode their bicycles in 2018, an increase from 1.5% in 2015.

Data from a particular route Downtown, however, shows how ridership can vary. A limited data sample from a traffic counter that the Pittsburgh Downtown Partnership installed over the protected bike lane along Penn Avenue in Downtown shows a drop in bicycle traffic in the lane.

"The only grocery store in the Hill District has just closed. So people feel they need a grocery store and affordable housing, and not necessarily bike stations."

Eric Boerer, advocacy director of BikePgh, said he believes the lower daily average for 2019 is partly explained by the high number of rainy days this year, along with nearby construction and cars illegally parked in the bike lane.

Heavy rains can also deter people from using their bikes. Over the next several decades, climate change is expected to cause a 5% increase in precipitation in Pennsylvania, according to the Union of Concerned Scientists.

Meanwhile, the Healthy Ride program in Pittsburgh has doubled in size, and the number of riders has increased, according to the organization’s website, which includes data on every rental.

Will an expansion of the bike infrastructure favor more affluent areas, while leaving out residents who live in low-income neighborhoods, including Homewood and the Hill District?

“The city has done a really good job making sure that investments in bike infrastructure aren’t just going into wealthier neighborhoods,” he said.

On the other hand, Healthy Ride didn’t roll out equally in all neighborhoods. Bricker said geographically flat, densely populated neighborhoods were prioritized to help the program get off to a stronger start. Experiences from other cities show that robust bike-share programs start in flatter, densely populated areas connected with bike lanes. 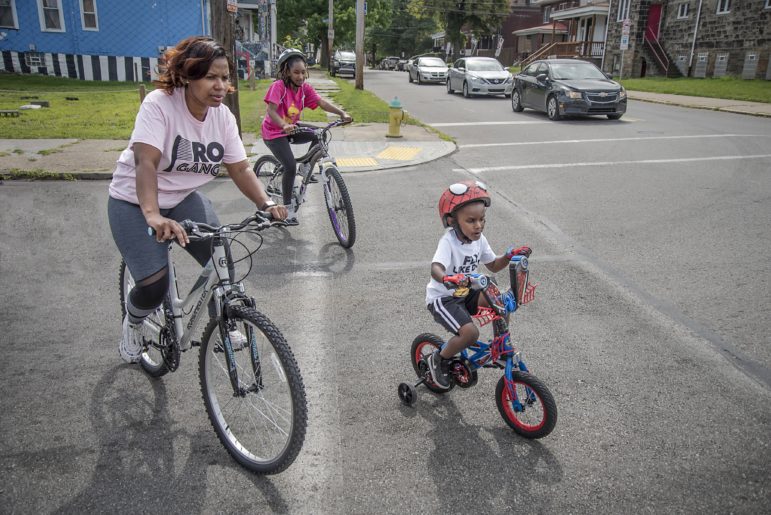 Jenelle Gordon biking with her daughter Samaudi and son Ezra during a Healthy Ride group ride in Homewood. (Photo by Teake Zuidema/PublicSource)

LaVette Wagner, 57, is an ambassador for Healthy Ride and she organizes group rides to familiarize people with the program, which installed the first five stations in Homewood last winter.

“OK, you-all, we will bike in two files along Homewood Avenue and then take a right on Hamilton,” she told a recent group, her voice betraying many years of experience as a fitness instructor. “Make sure you obey all the traffic laws.”

A few minutes later, 12 women, six children and two men began to bike a 40-minute loop through the streets of the neighborhood.

“Especially when you can’t afford a car, a bike can offer an effective way to get you where you need to go in your neighborhood,” Wagner said. She tells people on her group rides that with a ConnectCard for the Port Authority buses, you can make 15-minute rides on a Healthy Ride bike for free. Under normal rates, rentals are $2 for 30 minutes.

Wagner also hears concerns. Many participants in her group rides say they are afraid of sharing the road with cars. Others have physical issues that makes climbing the steeper streets difficult.

Erin Potts, spokesperson for Healthy Ride, wrote in an email that there’s a lot of interest and support in Homewood for the bike-share program.

“The Healthy Ride stations were discussed at a community meeting, and the people were fine with it as long as they weren’t placed in front of private homes,” Fuller said. “Healthy Ride listened to us and didn’t put them in front of homes.”

Fuller sometimes uses a Healthy Ride bike herself, but she doesn’t see the bikes as solving an urgent transportation problem in the community. “We seem to get around pretty well in Homewood.”

Rev. B. De Neice Welch, a pastor who ran for city council in District 9, considers investments in bike infrastructure a waste of money.

“I think the bicycles create more problems than they solve,” Welch said. “They’re not safe, and they take away space for parking and motorists.”

So far, usage in Homewood appears to be relatively low. The Healthy Ride station at the intersection of North Homewood Avenue and Finance Street has the most rentals of five stations in the neighborhood. It was the starting point for 136 bike rides in the second quarter of 2019, according to data from Healthy Ride. That’s an average 1.5 rentals per day, including several group rides organized by Healthy Ride.

The station ranked 77 in the number of rentals out of all Healthy Ride stations. While ridership is relatively low, it’s not an outlier. Station use varies across the city, and stations in more heavily trafficked areas, including along Penn Avenue near Bakery Square, have higher ridership. During the second quarter of 2019, the city’s busiest station was Downtown at Liberty Avenue and Stanwix Street. According to Ride Share data, the station had 1,659 rentals.

In the Hill District, residents who attended community meetings voted three times against expanding Healthy Ride. The neighborhood currently has one bike-share station, at the corner of Centre Avenue and Kirkpatrick Street. It had 98 rentals in the second quarter of 2019.

A proposal by Healthy Ride to install additional stations was voted down at community meetings in 2018 and 2019.

A letter of non-support that the Hill Community Development Corporation sent to Healthy Ride mentions the main concerns of the residents: “topography of the neighborhood, narrow streets, exacerbation of already limited parking, safety, and the flow of traffic at these locations.” 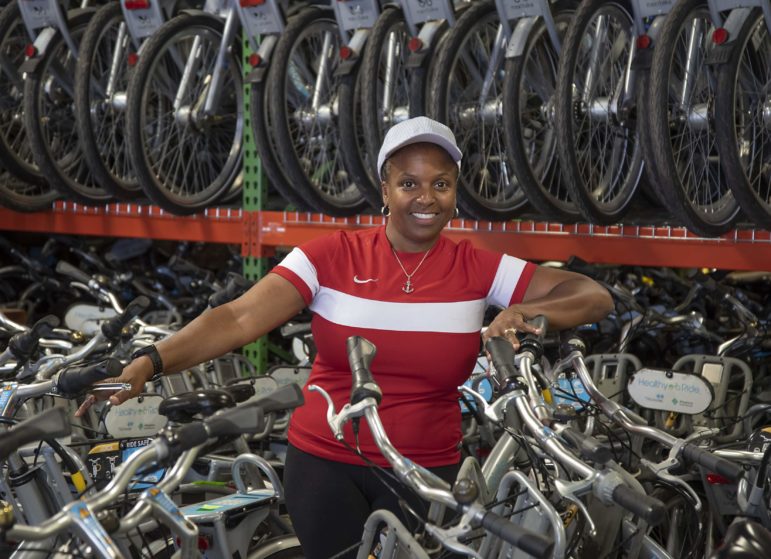 Wagner grew up in the Hill District, and she thinks that currently many residents have priorities other than biking infrastructure.

“The only grocery store in the Hill District has just closed,” Wagner said. “So people feel they need a grocery store and affordable housing, and not necessarily bike stations.”

This summer, several residents near the neighborhood’s Healthy Ride station expressed support for the program, though they said they had never rented one of the bikes.

“I don’t understand why they voted it down,” resident Deb Gloster said. “It’s an opportunity for young people to get around and get some exercise.”

In contrast, an elderly resident, who only wanted to identify herself as Rose, defended her opposition by pointing out how difficult it is for residents to ride up the neighborhood’s topography. “We’re on a hill here. I see them go downhill really fast on a bicycle, but really, how do they come up again?’

As the city moves forward with expansions in bike infrastructure, Healthy Ride is not giving up on increasing its presence in the Hill District.

“Some of the feedback we received from the Hill CDC suggested that more work is needed to engage the communities in the Hill District, which is precisely what we’re doing,” Potts said.

Bricker said he thinks that expanding the bike infrastructure will change people’s attitudes about biking. However, he also believes that advocates can better communicate the benefits of bikes.

“We feel that it’s a civil right that you should be able to be mobile without having to own an expensive car,” Bricker said. “But we need to do a better job explaining how biking and walking benefit the environment, can improve air quality, and make transportation more affordable and safer.”