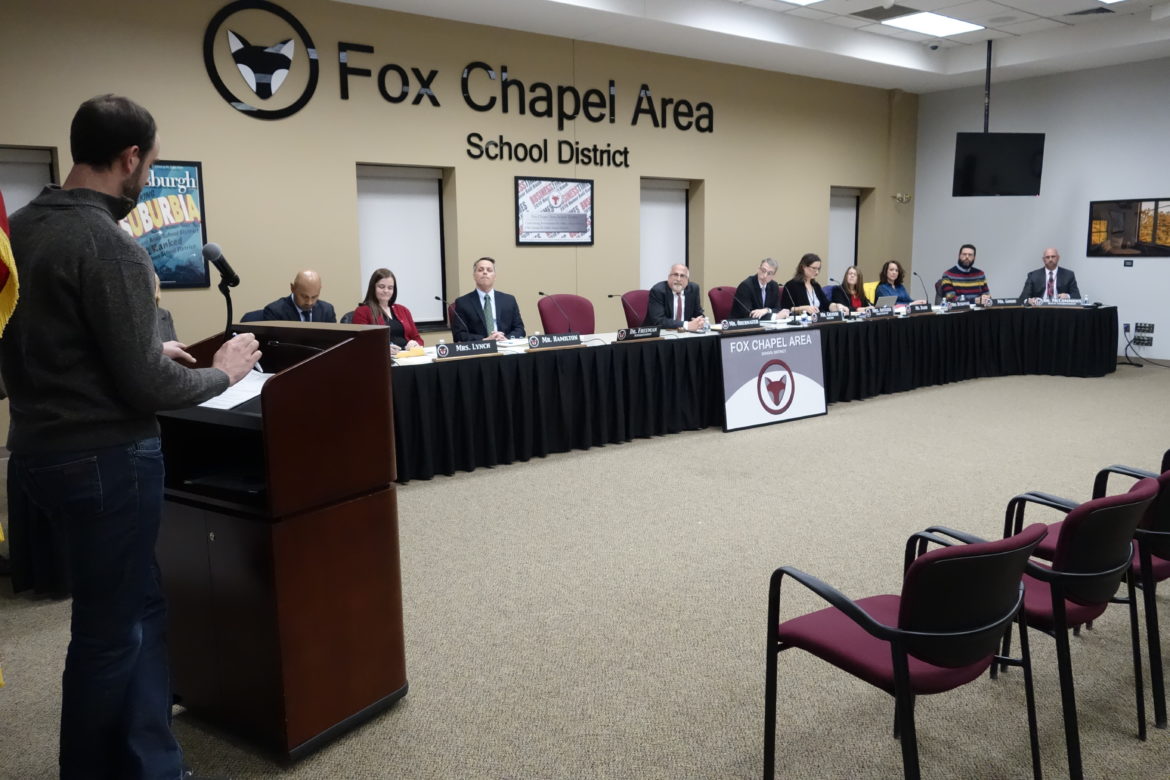 The newly reconstituted Fox Chapel Area School District board met for the first time on Tuesday evening, as four new members were sworn in. Among its first actions was a push for more transparency in decision making.

About three dozen residents listened as the board explained the process for hiring a new superintendent and announced new leadership for the nine-member board. Somer Obernauer will serve as the new board president, replacing Terry Wirginis who served on the board since 2011 until losing reelection in November.

After the roughly 90-minute meeting was over, three residents and two board members noted that debate seemed more vigorous than at past meetings. Earlier this year, some residents raised concerns about whether the school board was acting transparently enough and whether the board was doing enough to hold the district administration accountable.

Dana Kellerman, a parent with an eighth grader at the middle school, said she’d been attending board meetings for about a year and a half and noticed that the tenor had changed.

“There was vivid action between the board members,” she said. “Good questions and open discussion. It was very welcome.”

Obernauer, who has served on the board since 2014, explained the hiring process to replace Superintendent Gene Freeman, who informed the board earlier this year that he is retiring.

According to Obernauer, the board will select a firm to search for candidates; the firm and the board’s four-member search committee will solicit feedback about the qualities the community is looking for, draft a qualifications letter and advertise the position. Then, he said, the board’s search committee will narrow down the list of applicants and select candidates to interview; the full board will interview those candidates and narrow the field to three final applicants, who would then appear publicly before the community, allowing a final chance for input before a hiring decision.

Eric Hamilton, a newly elected board member, pushed for the first step in this process to be more transparent. The district solicitor, Paul Giuffre, said the district had inquired with several firms that it had worked with in the past rather than advertising the recruitment contract publicly. In response, Obernauer instructed the hiring committee to open up the bidding process to more recruitment firms.

Ronald Frank, the chair of the board’s new hiring committee, asked how many hiring firms would be enough: “Five?”

After the meeting, Hamilton said it didn’t really matter to him how many firms made bids. What mattered, he said, was that the process was open and fair. “Every step we can make public, we want to make public to keep the public informed,” Hamilton said.

Freeman was sick and did not attend the meeting.

One test of the new board’s priorities came during discussion of the Authority Board and whether to reappoint its current chair Richard Ranii and newly appoint Eric Schmidt, a former school board member who recently lost his reelection bid to Hamilton. The voluntary committee advises the board on construction and tax rates, and Obernauer said it is typically made up of experts in construction and architecture. “I believe we’ve taken the recommendation of the Authority Board every time since 1991, except for two times,” Obernauer said.

Assistant Superintendent David McCommons said the district has a hard time getting people to serve on the Authority Board.

Three new school board members, Hamilton, Vanessa Lynch and Marybeth Dadd, along with veteran board member Edith Cook, had questions about the transparency of the appointment process and how the board functioned: Were the positions publicly posted? How many members of the Authority Board can serve at one time? Why were they appointing a sixth member, which would leave the board with an even number of votes? Why were the appointments for five years?

McCommons, however, didn’t have the information to answer.

Cook took issue with the lack of information.

“I don’t feel so comfortable appointing a new member without knowing if there has been an advertisement for this position, since it’s a five-year position that is almost automatically renewed,” Cook said.

Hamilton asked to see the resumes of the two candidates, but they weren’t available.

McCommons said he could personally speak to the qualifications of the candidates in lieu of their resumes.

But then, two new motions were put forward, one to approve the reappointment of Ranii and a second to delay a decision on Schmidt’s appointment. Ranii was reappointed unanimously, but the vote to delay a vote on Schmidt narrowly passed, 5 to 4.

Adam Goode, an employee at Google who was appointed to the school board in October, was the only member to change his vote after the discussion. He first voted to move forward on the appointments but then, once the two appointments were separated, he voted to delay appointing Schmidt. Goode said he was trying to strike a balance between getting things done and having enough information to make an informed decision.

“You always have to balance doing business and doing it in a timely fashion with deferring things that make sense in order to gather more information,” he said.

The debate over the appointment to the Authority Board, in particular, pleased parents in the audience like Kellerman who had been pushing for reform. “When they felt they needed more information, they tabled the discussion and will have all the information they needed to have a vote,” she said. “That seems like how a board should work.”