Update (Dec. 4, 2019): The Allegheny County Council on Dec. 3 approved the 2020 operating budget as proposed and amended the capital budget by adding $30,000 to a Conservation District study and subtracting the same amount from lateral support road projects.

Allegheny County Council is slated to vote Dec. 3 on a proposed $959.8 million operating budget for 2020, representing a 2.9% increase over this year.

PublicSource compiled a sampling of notable trends in department allocations over the eight years of Fitzgerald’s tenure.

According to the analysis:

If the 2020 budget proposal is approved as is, annual spending will have grown 22.4% under Fitzgerald, with an average increase of 2.6% each year.

Not all departments, though, have seen equal funding growth. Of the roughly 30 departments and agencies PublicSource reviewed:

PublicSource took a closer look at the following allocations between 2012 and 2019:

Allocations to departments in the realm of law enforcement have significantly outpaced the 18.9% growth in county spending from 2012 to 2019 budgets. Despite a 5% decrease in inmate population since 2012, according to county data, spending at the county jail has increased 53.6%. The jail assumed management of correctional health care in 2013, but the budget does not specify how much of the increase that year is directly related to the healthcare costs. 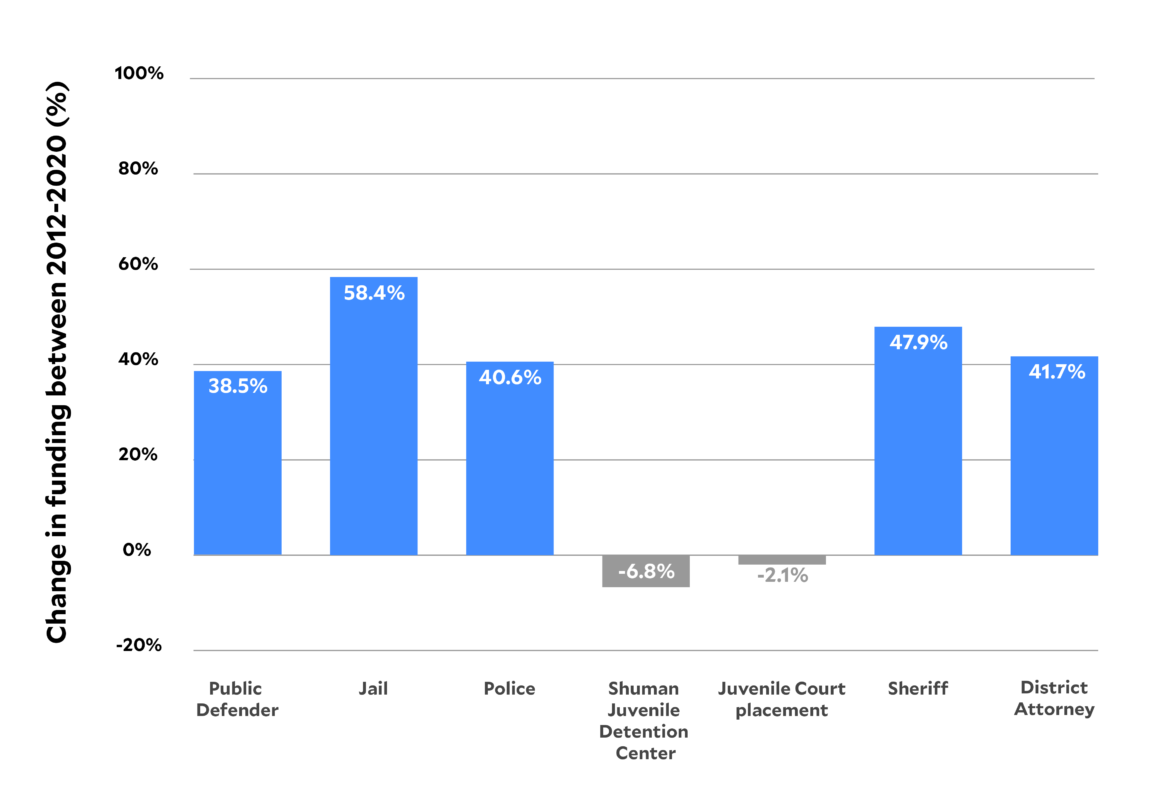 *The budget figures for 2020 are proposed. The remaining figures come from Allegheny County operating budgets from 2012 to 2019. Only percent change is shown here; departments' budget levels vary significantly. To see the starting and ending amounts for each department, search the county budgets here.

Downs did not make department heads available for comment and she did not provide answers to PublicSource’s inquiry about the correctional healthcare costs.

The jail, police and district attorney have not had budget cuts under Fitzgerald.

Downs also noted that the Pennsylvania Department of Environmental Protection now handles a water program previously handled by the county health department. According to Downs, some department functions paid for with grant money are not reflected in the operating budget.

Fitzgerald has proposed a 1.4% increase in 2020 for the Kane Regional Centers, the county-owned nursing homes where staffing, long hours and low pay has long been a concern. The bulk of the growth would be going to personnel expenditures, which, if approved, represents a 3.2% increase in employee costs over this year.

Staffing is universally recognized as critical for providing good care. According to the 2020 budget, nursing and nursing assistants “continue to be challenging positions to recruit and hire for.” The budget notes that registered nurses are estimated to be in short supply “for the next 20 years” and that the county is making staff retention a focus in 2020.

The topic of parks funding has been a notable local issue. In the City of Pittsburgh, voters approved a real estate tax increase to provide $10 million in annual funding for the city’s parks system.