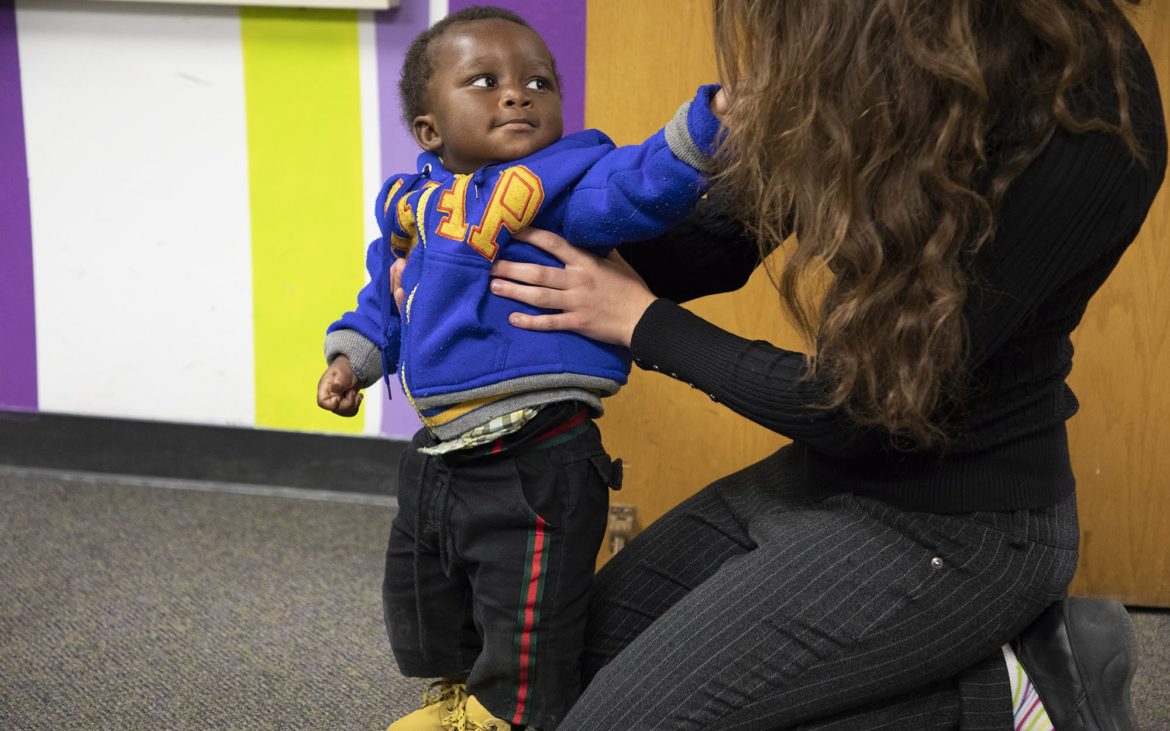 Heli Amisi, the youngest child of Mauwa Lulacha and Amisi Asukulu, plays with an employee of Acculturation for Justice, Access and Peace Outreach [AJAPO] at its office in the Hill District. AJAPO is now one of only two area groups that offer refugee resettlement. Amisi's parents, originally of the Democratic Republic of Congo, have four other children and arrived in the area in September. (Photo by Kat Procyk/PublicSource)

Changes to federal immigration policy under the Trump administration have prompted one of three Pittsburgh-area nonprofits that provide refugee resettlement to end those services.

The federal government announced in September that the United States in fiscal year 2019 will accept only 30,000 people fleeing persecution — the lowest level since the creation of the U.S. Refugee Act in 1980. The reduced cap this year and for next year translates into fewer refugees entering the region and a decline in funding, which contributed to the Sharpsburg-based Northern Area Multi Service Center [NAMS] deciding to shutter its refugee resettlement services.

Those involved in area refugee resettlement say there will be no shortage of services for refugees seeking to build a new life in the Pittsburgh area, even as NAMS directs current and past clients to two other federally funded organizations that provide refugee resettlement.

“Unfortunately, the current climate surrounding refugee resettlement services dictated that we had to make this difficult decision,” said Kurt Meier, NAMS chief operating officer, in a written response. “The limited funding had always presented a challenge to maintain from a financial aspect, and that challenge only increased over time.”

Jewish Family and Community Services of Pittsburgh in Squirrel Hill and Acculturation for Justice, Access and Peace Outreach [AJAPO] in the Hill District each provide resettlement programs.

The new refugee cap, announced by Secretary of State Mike Pompeo, is low compared to caps in recent times. In fiscal year 2016, nearly 85,000 people were admitted under the U.S. Refugee Act, according to Pew Research Center.

Jessica M. Vaughan of the Center for Immigration Studies in Washington, D.C., said the lower cap won’t diminish the reputation of the United States as a safe haven.

“We will still be an important destination for the highest priority cases that the U.N. is processing,” said Vaughan, director of policy studies.

With the lower cap on refugees, she said, “more resources can be put toward making sure they are supported once they get here. We can focus on quality of the resettlement efforts rather than just quantity.”

NAMS assisted 67 refugees from Oct. 1, 2017 to Sept. 30, 2018 — less than half the number of people they helped in the same period the year before, said Rebecca Johnson, NAMS director of community assistance and refugee resettlement programs. From October 2015 to September 2016, Johnson said NAMS served more than 260 refugees (the highest amount since they began offering refugee resettlement services).

Nationwide, the federal government funds nine nonprofit organizations to direct refugees to states across the country. The refugees are referred to organizations, like NAMS, that receive federal funding to assist refugees with securing housing, filling out paperwork and enrolling children in school.

By this time of year, those organizations have typically received projections on how many refugees they may expect to see and possible funding levels.

Yet Pennsylvania leaders have not been notified about funding levels or how many refugees to expect to enter the Commonwealth next year, said Colin Day, press secretary for the Department of Human Services, which oversees the Pennsylvania Refugee Resettlement Program.

The closure of the NAMS programs “doesn’t affect us,” said Leslie Aizenman, director of refugee and immigrant services for the Jewish Family and Community Services. “We will continue, and Northern clients that need more help will be referred here or AJAPO. We enjoyed working with [NAMS] ... but the clients will be OK.”

Jewish Family and Community Services assisted 71 refugees in the fiscal year ending Sept. 30, Aizenman said. That’s a drop compared to 148 refugees served the year prior and 231 from the 2015-16 fiscal year.

The spike was at least in part due to the Obama administration opening more slots for people fleeing from conflicts in Syria and other Middle Eastern and North African nations, she said.

At this point, Johnson said all of NAMS’ active cases have been transferred, but they are fielding questions “from a handful of people.”

“I’ve loved being part of this, and I know refugee resettlement will find its day in the sun,” she said. “It can be diminished, but it can be built back up, which we hope to see in the coming years.” 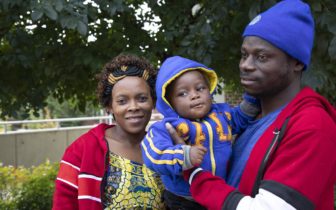 Mauwa Lulacha (left), Amisi Asukulu (right) and their son, Heli Amisi, came to Pittsburgh about a month ago from a refugee camp in Tanzania. Originally from the Democratic Republic of Congo, the family includes four other children. (Photo by Kat Procyk/PublicSource)

Organizations that provide refugee resettlement provide specific services immediately after refugees arrive to help them get situated in the United States. AJAPO helped Amisi Asukulu and his wife, Mauwa Lulacha, secure housing and find English-as-a-Second-Language classes, among other services. They arrived in Pittsburgh on Sept. 27 with their five children, ranging in age from 1 to 13, from a refugee camp in Tanzania.

They are originally from the Democratic Republic of Congo, where war had forced more than 685,000 Congolese to seek refuge in neighboring countries at the end of 2017, according to the UN Refugee Agency.

Asukulu was a teacher and he also coached soccer. Lulacha owned a small business in which she would buy and sell items.

Through an interpreter, the couple said they wanted to leave because there is no peace in their homeland. Asukulu said he would like to further his education and become a teacher here. They have been staying in Crafton since they arrived.

AJAPO has also served fewer refugees eligible for resettlement services, said the organization’s executive director, Yinka Aganga-Williams. AJAPO expected up to 130 refugees in the fiscal year that ended Sept. 30 but served about 70 (including those who arrived on special immigrant visas).

“There are so many ways in which [refugees] have truly enriched us,” Aganga-Williams said. “If they are no longer coming, yes, that will slow down. But it’s an opportunity for us as a community,” to examine how to improve supports for refugees and other immigrants in ways that were previously difficult to do because of the influx of people seeking refuge.

Kimberly Palmiero is a journalist based in Pittsburgh. She can be reached at kimpalmiero@gmail.com.