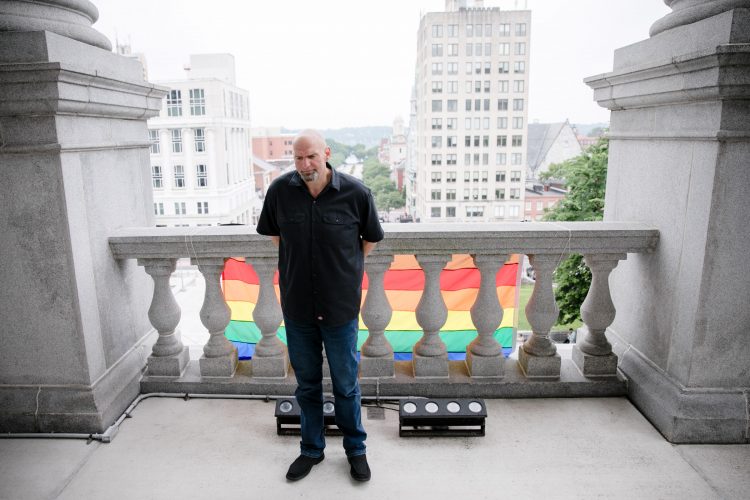 He couldn’t look more like Western Pennsylvania if he came with French fries and coleslaw.

Yes, he’s 6 feet 8 inches tall, has arms full of tattoos, is built like a linebacker and is always ready for a scrap (on Twitter, at least). But at heart, Pennsylvania Lieutenant Governor John Fetterman (D), and former mayor of Braddock, is a Harvard-educated policy wonk, who has a tight command of the issues that he wants to address at the next level.

After announcing last week that he’s exploring a run for the U.S. Senate seat of retiring PA Senator Pat Toomey (R), Fetterman received 16,000 individual donations from all 67 Pennsylvania counties and all 50 states. He raised more than $500,000 in 72 hours.

He has built a national following on social media, fueled by his fight against false claims of voter fraud in Pennsylvania. When Texas Lt. Gov. Dan Patrick offered a $1 million bounty for evidence of voter fraud, Fetterman laid claim to it when an instance was actually found — when “my dude in Forty Fort” PA allegedly forged the name and signature of his deceased mother in an absentee ballot application to vote for … Trump.

Fetterman asked for the $1 million in Sheetz gift cards.

It’s been refreshing to see someone punch back on the attacks on Pennsylvania’s elections — some of which came from its own members. A month before the riot at the Capitol, more than 60 Republican state lawmakers signed a letter urging Pennsylvania’s congressional delegation to reject the results of President-elect Joe Biden’s win, alleging some kind of unspecified voter fraud.

“And I still allege that I have a full, beautiful head of hair!” says Fetterman. “ … There are precious few that genuinely believe that it was rigged in any way. It’s a protest belief because there’s so many gaping holes in the logic and the logistics.

It is, he says, “the crown jewel of wingnut tin foil conspiracies.”

If he makes it to the Senate, expect a complete break with the conservative orthodoxy of Pat Toomey. But what would he change, exactly?

“I don’t mean this in a smart aleck way — but everything,” says Fetterman. “Yeah, like, there isn’t one single thing that I can think of about Pat Toomey and acknowledge that I would replicate, emulate or consider. There’s really nothing there — truly an empty vessel.”

Instead, many of the same issues animate him now as they did when he was mayor of Braddock.

“I have been working on advancing and championing the same core group of principles, ideas and ideals, for the last 20 years,” says Fetterman.

“Rampant inequality, a minimum wage ($7.25 an hour) that is essentially unchanged in the last 13 or 14 years, health care — I mean, we endured the closing of UPMC (Braddock) and all that … You have marginalized and abandoned communities and the people that live there. You have criminal justice reform, you have community policing. You have immigration, my wife’s story. I mean just ‘the war on drugs.’ I mean just any number of these things are what brought me to Braddock 20 years ago.”

His wife, Gisele, is almost as famous as he is online. A formerly undocumented immigrant who fled violence in Rio de Janeiro in 1990, she co-founded 412 Food Rescue and the Braddock Free Store. Their inter-family spats — ranging from excessive Funyuns consumption to cropping the giant John’s head out of family photos — indicate a warm, loving family willing to have fun at each other’s expense. It’s easy to be charmed by them.

As the country reels from the recent attacks on the Capitol, and processes threats made to capitols in all 50 states, Fetterman is not worried about his safety.

“It’s dramatically improved,” he says. “I just left the Capitol (in Harrisburg on Wednesday morning) and we had two soldiers armed with automatic weapons, very visible and making it abundantly clear that, you know, like, ‘F___ around, and find out.

“No one wants anything like what happened a week ago, and I fundamentally believe that there still might be people plotting, but I think those … are going to be confronted by the reality that it’s going to end incredibly badly for them if they would make such a move.”

Fetterman sees a connection between the state GOP’s recent refusal to seat (since resolved) the elected senator for the 45th district, Jim Brewster, and their persistent refusal to acknowledge Biden’s win.

“The GOP has become a party of ‘democracy for me, but not for thee,’” says Fetterman. “‘The voters love us — that’s why I won this race — but if you won your race, it’s because you cheated,’ or ‘it was rigged,’ and all this other nonsense.

“Like I get it, Joe Biden isn’t your President, but he is the president,” explains Fetterman. “And we can’t get to a place as a country where we tolerate that kind of sentiment. It’s just so disruptive. Now, so yeah, it’s a straight line, quite frankly. You have people arguing, like Mike Kelly, that ‘My race was true and there wasn’t any fraud in my race, but that Joe Biden, well it was rigged for him.'”

Fetterman has run for Senate before, unsuccessfully, in 2016. But he had little name recognition outside Western Pennsylvania at the time and finished with a surprisingly high 20% of the vote.

Fracking is, of course, an issue that came up in the Presidential race in Pennsylvania, and is a tricky one for a progressive like Fetterman to navigate.

“I have a position on fracking, that I clearly articulated, that Democrats must confront and be honest about energy and Republicans must confront and be honest about the environment,” says Fetterman. “And we have to figure out a way that we can work together to combat the very real and existential threat of climate change. And it’s going to require examining our current portfolio of energy sources and where it comes from and balancing jobs and balancing the environment and balancing science and physics.”

If the practice was banned immediately, “Well, where does 40% of our energy come from?” he asks.

“Now I would love all of that to come from wind and solar and renewables, but the reality is that’s not a switch you can flip and change overnight,” says Fetterman.

Few issues animate Fetterman quite like fully legalizing marijuana in Pennsylvania, as other states have done. In 2019, he went on a listening tour of all 67 PA counties, to discuss it.

“Critics try to make it sound like it’s ‘Cheech & Chong’ or Jeff Spicoli, when it’s actually one of the most powerful yet simple levers that we could activate, whether it’s in Pennsylvania or nationally, that would transform our society, quite frankly,” says Fetterman. “I mean, in Pennsylvania, it would be seismic.”

He likes to point out that he was the only candidate for national office in 2016 to support full legalization.

The impact of criminalization on Black and Brown communities is a disgrace, he says. And if marijuana was fully legalized, the state would have billions in revenue instead of billions in deficits, especially during the pandemic.

“It would create tens of thousands of unsubsidized jobs,” says Fetterman. “It would be a boon for our farmers in terms of a cash crop. It would be (great) from a personal freedom standpoint. It would be a gateway drug away from opioids and other harder substances, you know. And our veterans need this desperately — I can’t tell you how many veterans came to the 67 county stops and, you know, many of them in tears, discussing that.”

Medical marijuana is used by some veterans to treat post-traumatic stress disorder, though studies on its efficacy are ongoing and incomplete.

As Chairman of Pennsylvania’s Board of Pardons, the Lieutenant Governor takes his role seriously in helping people with criminal records rejoin society.

“Our country has mastered the punishment side of criminal justice,” says Fetterman. “We must nurture and expand the redemption and the forgiveness part of that equation. If you’re living your best life, and you’ve moved on from a really bad choice you may have made when you were young, or 10-20 years ago, you should be afforded the opportunity to fully rejoin the franchise. And I want to change that conversation.”

He talks of people who come before the Board saying, ‘God, I can’t believe I did something so dumb.’ Now they’re married with kids and they just want to volunteer at the PTA, and they can’t. “Why, as a society,” he asks, “would we not want to help make everybody better off?”