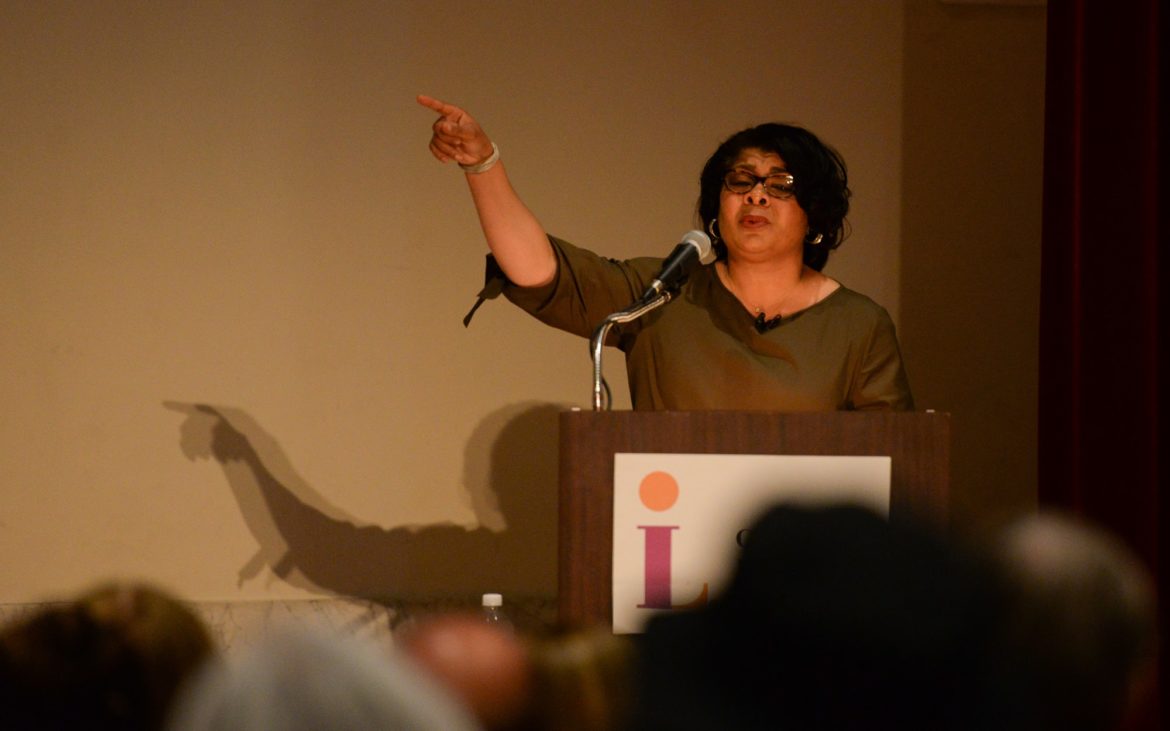 April Ryan is more than a meme. She is a reporter who has been covering the White House for 20 years and at the Carnegie Lecture Hall Wednesday night she reminded the Pittsburgh audience that no, we don’t live in a post-racial America.

To that point, she listed the questions she would ask President Donald Trump if she was able to have dinner with him as she has with each of the past presidents she’s covered as a correspondent for American Urban Radio Networks.

“I pretty much want to ask him about issues on the matter of race,” she said.

This list includes queries about why he wooed the leaders of Historically Black Colleges and Universities earlier this year, but now takes no action to provide funding that would save some from closing.

“HBCUs are a large reason why a number of African Americans reach middle income status. I am one of them,” Ryan said.

She’d also ask what he plans to do to start “weeding out bad policing.”

“From the time that African Americans have been brought as slaves to America, there are issues with policing and African Americans. We see the visuals. You’ve seen a fiance sitting next to her man and see him shot,” she said. White House correspondent April Ryan signs a copy of her book "At Mama's Knee: Mothers and Race in Black and White" after her lecture and Q&A. (Photo by John Hamilton/PublicSource)

The question Ryan asked the president in February put her in the Trump spotlight. She asked the president if he was planning to include the Black Congressional Caucus in his inner-city agenda. President Trump in turn asked if they were “her friends” and if she could set the meeting up.

Ryan has become the story after sparring with White House Press Secretary Sean Spicer in March when he told her to “stop shaking her head.” The comment came after she asked how Trump planned to change the perception of his administration given the investigations into reports that his campaign had ties to Russia.

She doesn’t like the attention on her, but Ryan is willing to use it to shine light on the issues she covers.

During a meeting with student journalists at Obama Academy 6-12 earlier on Wednesday, she explained the importance of the free press and the verbal abuse she’s been willing to endure in order to protect it.

That includes accusations from Spicer that she had an agenda other than reporting the news accurately. She cited it as an example of how the current Washington administration doesn’t want to answer to the media and the public.

“We are under attack right now. If we are oppressed then it becomes a dictatorship,” Ryan said, explaining that reporters ask questions on behalf of the public.

She expressed similar sentiments to her adult audience at the Carnegie Lecture Hall citing the current climate of considering the press “the enemy, the opposition party.”

While speaking, Ryan was unaware those attacks would turn physical. But by the end of the evening, news reports circulated about an assault by a Montana congressional candidate on a reporter from The Guardian who asked questions about the Congressional Budget Office analysis of the Republican healthcare proposal that would cut insurance to 23 million Americans.

Ryan was recently named the Journalist of the Year by the National Association of Black Journalists and a political analyst on CNN.

She congratulated the student journalists at Obama telling them: “You are part of the Constitution of the United States.” White House correspondent April Ryan answers a question from the audience during the Q&A segment. (Photo by John Hamilton/PublicSource)

She talked to the students about events at the federal level that will affect them. Education cuts that could take programs and resources from their schools and cut student meal programs.

“There are some kids whose only meal each day is the meal they get at school. They are looking at cutting that,” she said.

She challenged them to know what’s really going on in the community. “If you are asleep at the wheel, so much can happen.”

And similar to the way Ryan shoots questions at bureaucrats, the students at Obama had questions for her.

What was your most memorable moment?

She recalled being “overcome with emotion” while flying with the press corps and former President Barack Obama to Selma, Alabama, for the 50th anniversary of the civil rights march from Selma to Montgomery, which ended in the brutal beatings of some marchers.

What has changed about you job since you became a subject in the news?

“Now I am constantly on Twitter” to see what’s going on. Trump, she said, is the first president to communicate via tweets.

Does covering racism make you fear for your kids?

Ryan, a single mother of daughters ages 9 and 14, told a story about her aunt frantically calling her younger daughter into the house when the girl was playing with a Nerf gun in the backyard.

The incident occurred in the wake of Tamir Rice, a 12-year-old Cleveland boy who was fatally shot by police in 2014 while playing with a toy gun in a park.

Ryan had to explain to her then 7-year-old daughter that it wasn’t safe for her to play with the Nerf gun outside “because a little boy was killed for playing with a gun.”

How do you hold up under the verbal attacks and criticism you’ve faced?

Ryan said she “has right on her side.”

“People are going to spin all day long but you have to say, ‘This is not right,’” she said.