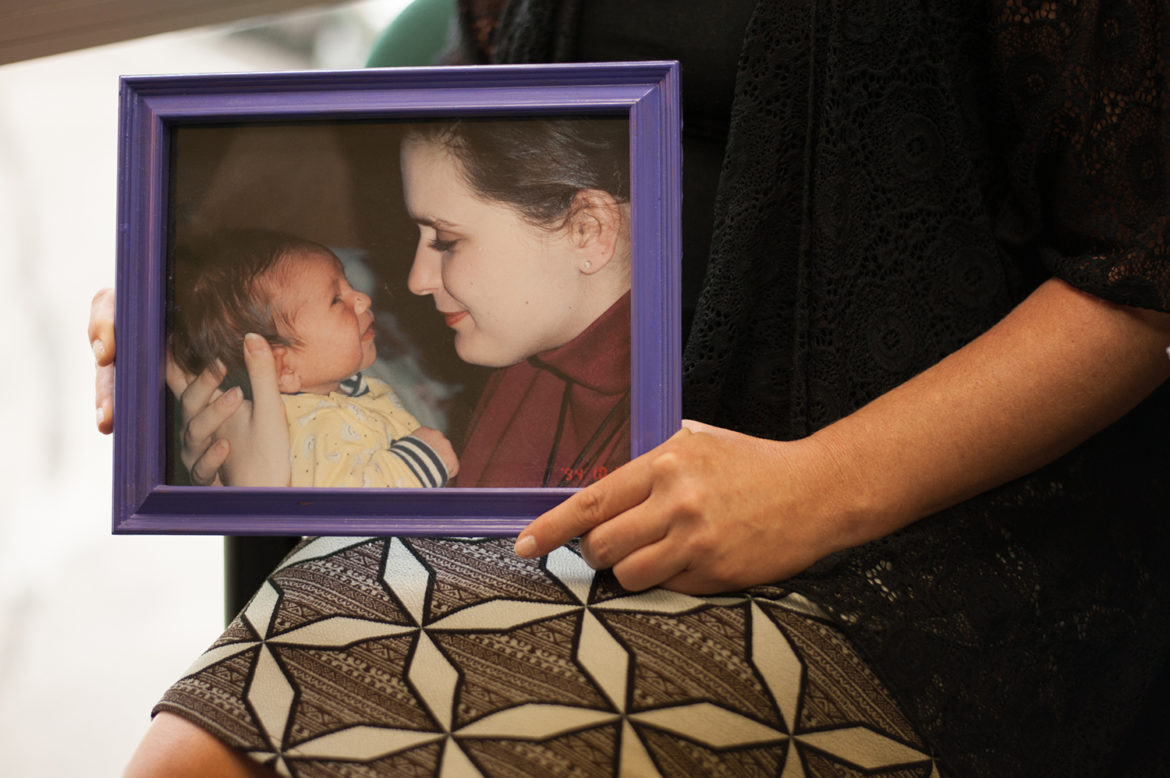 Living with a child who suffers from mental illness can be like living in a minefield.

Each day brings with it the possibility of an explosion.

Refusing to go to school. Uncontrollable crying and screaming. Violence toward family members. A threat or attempt of suicide.

“You can have 7-year-olds who are climbing out of their bedroom windows onto the roof,” said Julie Trbovich.

As the mother of a 21-year-old who has schizophrenia, Trbovich would know.

She keeps a black box of papers that document the travails of mental illness for a boy who grew into a man she mostly hears about from others who catch sight of him.

Her son currently lives on the streets.

Despite multiple diagnoses of mental health and behavioral problems, Trbovich repeatedly contended with delays in getting him to a psychiatrist — delays created by a widespread shortage of child and adolescent psychiatrists.

Now, as manager of children and family programs for the National Alliance on Mental Illness Southwest Pennsylvania, Trbovich helps other families to navigate the child and adolescent mental health system. 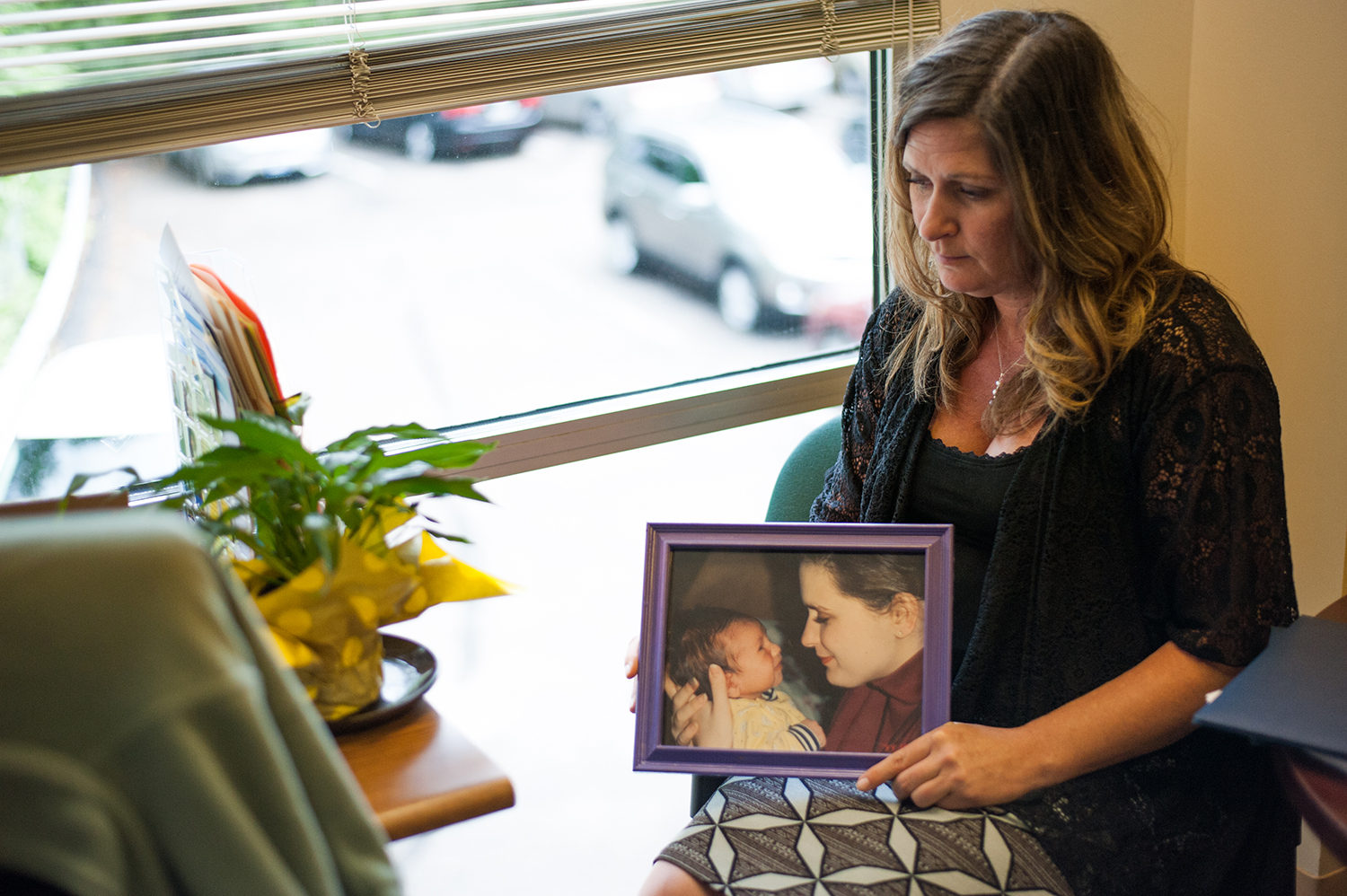 Julie Trbovich uses what she learned as a mother of a child with mental illness to guide other families with children who are experiencing similar problems. Trbovich’s son is 21 now, but the wait times for services and shortage of youth psychiatrists persist. (Photo by Sarah Collins/PublicSource) 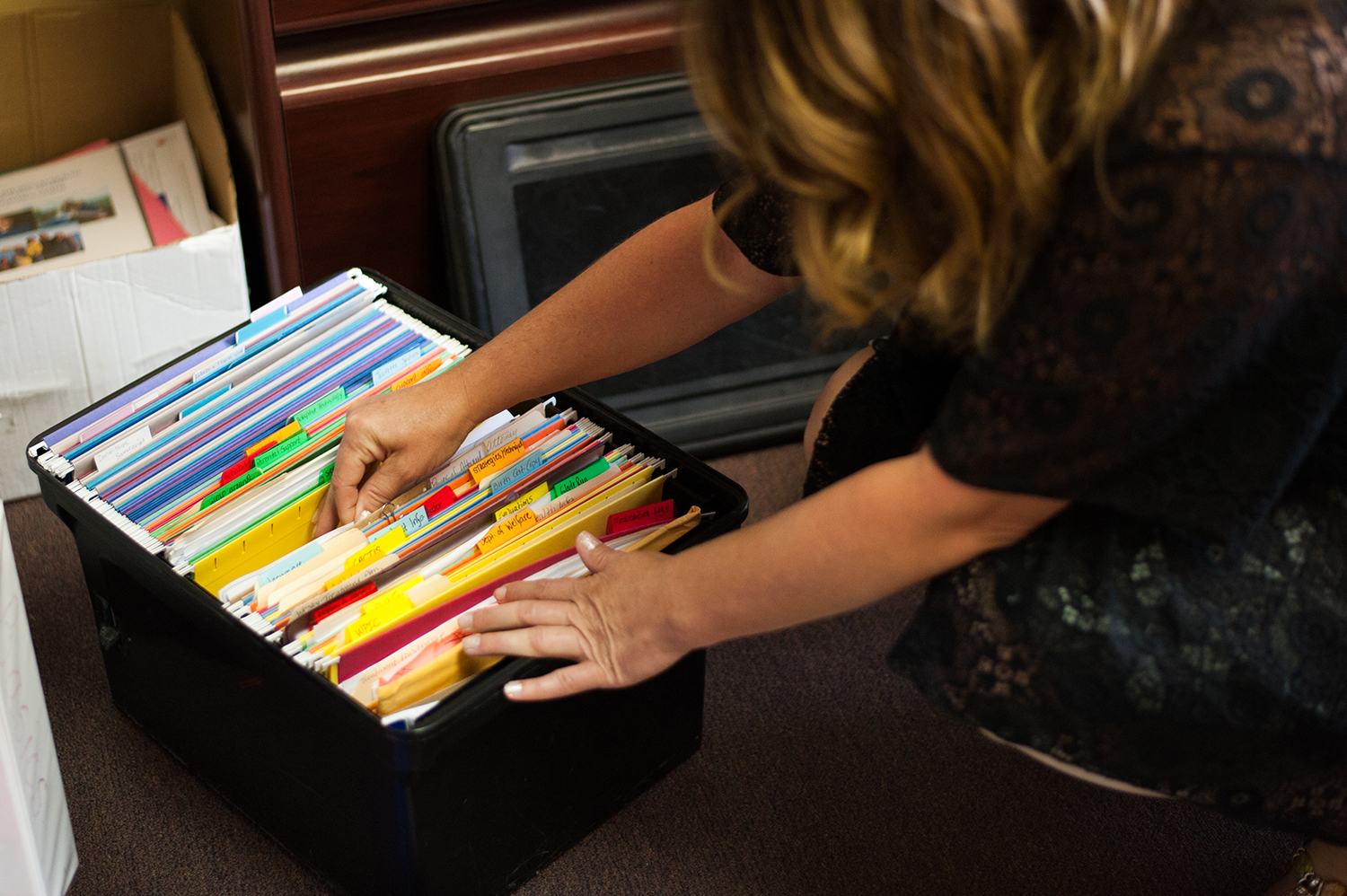 Julie Trbovich flicks through files of medical information and memoribilia of her 21-year-old son who has schizophrenia and lives on the streets. Despite multiple diagnoses of mental health and behavioral problems, Trbovich repeatedly contended with delays in getting him to a psychiatrist — delays created by a widespread shortage of child and adolescent psychiatrists. 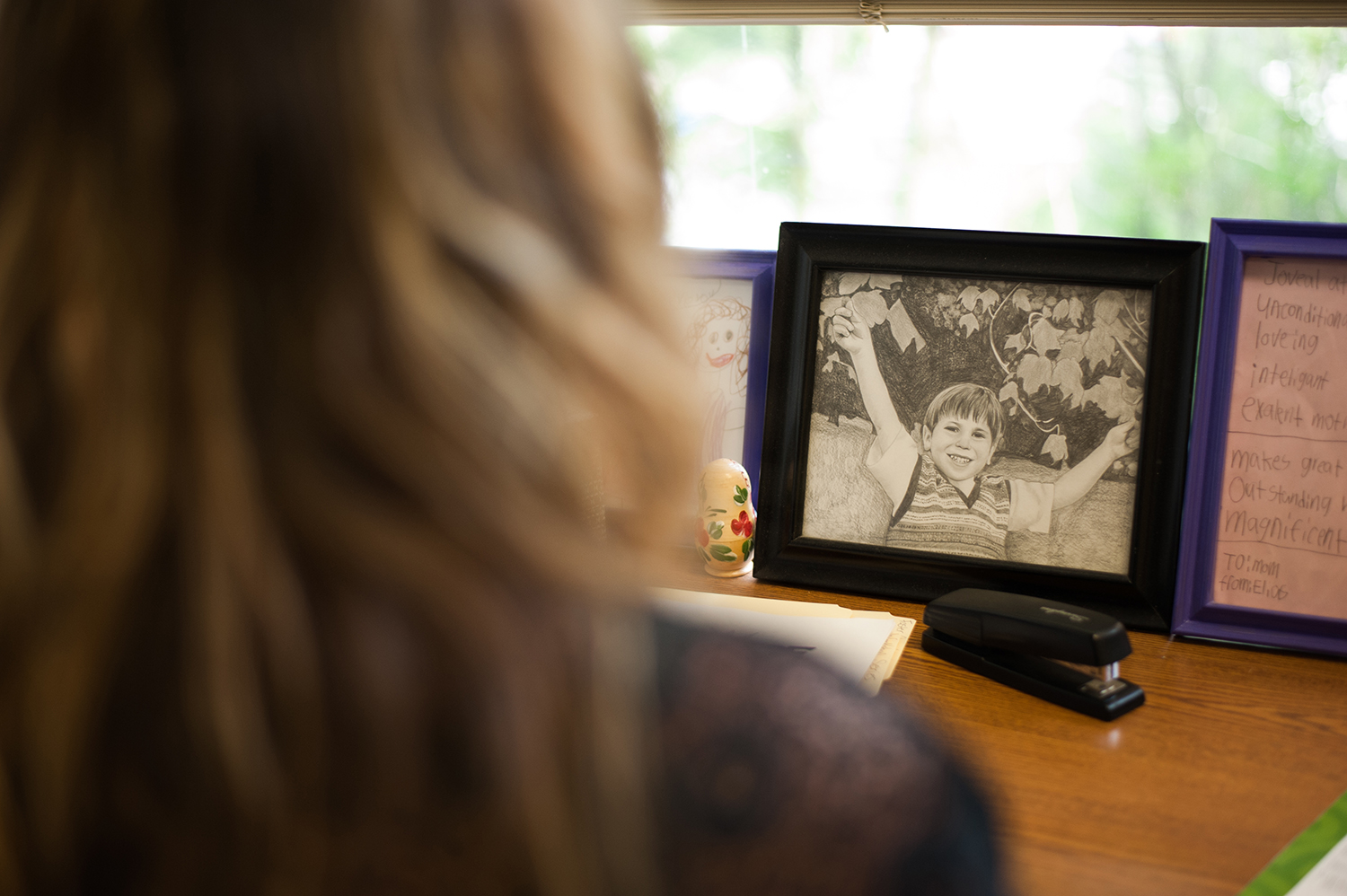 Julie Trbovich gazes at an old drawing of her now 21-year-old son who has schizophrenia and lives on the streets. Despite multiple diagnoses of mental health and behavioral problems, Trbovich repeatedly contended with delays in getting him to a psychiatrist — delays created by a widespread shortage of child and adolescent psychiatrists.

Pennsylvania is among 42 states identified as having a severe shortage of child and adolescent psychiatrists by the American Academy of Child and Adolescent Psychiatrists [AACAP].

Pennsylvania Department of Human Services Secretary Ted Dallas told PublicSource the shortage is worse in rural areas, and his agency is creating programs to quickly deliver services to young people.

Any mental health professional will tell you time is of the essence when a person, especially a more impulsive young person, is in crisis.

Though the national average wait time for appointments is seven and a half weeks, mental health service providers in Allegheny County said average wait times range from four to eight weeks.

In Allegheny County alone, 108 teens and young adults died by suicide since 2011.

Because half of all mental health issues show signs by age 14, local legislators and doctors are pushing for routine mental health screening for young people to detect and treat problems early.

The screenings have little impact without access to treatment. When there are already so few answers to preventing suicide, a scenario where one proven intervention is out of reach can have dire consequences.

Only one in the whole county

Nationally, there are about 8,300 child and adolescent psychiatrists to treat the country’s estimated 15 million youth with behavioral and mental health issues, according to the AACAP.

Anyone threatening suicide should be taken to an emergency room or helped by calling Allegheny County’s crisis hotline at 1-888-796-8226.

The AACAP data shows Allegheny County in a slightly better situation — a high, rather than severe, shortage with nearly 38 youth psychiatrists per 100,000 children.

However, all the other counties that make up Southwestern Pennsylvania are identified as having severe shortages.

In Greene County, there is no full-time child and adolescent psychiatrist, said Ann Gaydos, director of Behavioral Health Services at Centerville Clinics, which provides the county’s mental health services. Centerville leases doctors from a psychiatric practice in Bethel Park in Allegheny County.

Mental health service providers, including those operating at Pittsburgh Public Schools, say most young people can be treated with therapy.

Of the 604 students from 32 schools referred for screening this last school year to Pittsburgh Mercy Child and Adolescent Behavioral Health Services, 116 had thoughts or plans about suicide and were referred to psychiatrists.

Of them, 10 had attempted suicide.

Richard Sharp, the unit’s director, said most of the kids probably ended up on waiting lists when they were referred.

Even the most vulnerable of young patients are subject to waits.

Youth who have stayed at psychiatric hospitals still experience waits of about a month to see a psychiatrist on an outpatient basis, said Dr. Anna Boettcher, medical director of community psychiatry at Pittsburgh Mercy.

Why so few psychiatrists?

Like so many other problems, time and money are at the root of the psychiatrist shortage.

It’s the same time commitment to become a psychiatrist as other specialities, but insurance reimbursements and salaries are lower.

An April 2016 compensation report from medical news site Medscape showed orthopedic doctors at the top of the pay scale with a salary of $443,000.

Psychiatrists were listed near the bottom of the pack with a salary of $226,000.

Even if more students were recruited into the field today, they would need to spend 13 years in school and training, said Dr. Bradley Stein, a child and adolescent psychiatrist who is a senior scientist at the Rand Corporation in Pittsburgh.

The lack of psychiatrists means most children with mental health issues are likely being seen by their pediatrician or a certified nurse practitioner.

On July 22, state Human Services announced its Telephonic Psychiatric Consultation Service Program, or TiPS, which will allow pediatricians and other primary care providers who treat Medicaid-covered youth up to age 21 to have phone consultations with psychiatrists.

The service will provide pediatricians guidance on treating patients with behavioral health issues or how to at least be an effective stopgap until a patient can see a psychiatrist.

“Ideally, you don’t want to have a wait time,” Secretary Dallas said. But, “if folks can stabilize the situation until you get a chance to get there...it really is a continuum of services.

That’s the approach we have to take if we are going to be successful.” Dr. Abigail Schlesinger is the medical director of the Outpatient Behavioral Health and Child and Family Counseling Center at Children’s Hospital of Pittsburgh of UPMC. She is also directing the TiPS Southwest and Northwest zones in conjunction with the Children’s Community network of pediatric practices throughout Western Pennsylvania. (Photo by Sarah Collins/PublicSource)

“We are totally behind it,” said Suzanne Yunghans, executive director of the Pennsylvania Chapter of the American Academy of Pediatrics.

“I feel like the practices will welcome all of the help they can get.”

Stein of Rand said there is evidence that psychiatric consultation services have improved how pediatricians treat mental health issues.

Like TiPS, the Children’s Hospital of Pittsburgh of UPMC and the Western Psychiatric Institute and Clinic has been providing telephone conferences between psychiatrists and the 170 practitioners in its Children’s Community network in Western Pennsylvania since 2008.

The Children’s network has also placed therapists at pediatric units to treat children who are awaiting a first appointment with a psychiatrist.

“Having ready access to psychiatrists enables the kind of timely collaboration that makes patients better quicker,” Wolfson said in a statement.

In addition to the phone consultations, both TiPS and the Children’s Community network will provide telepsychiatry for patients in areas where they can’t physically get to a psychiatrist’s office.

Dallas said TiPS and telepsychiatry are the types of efforts needed to address what looks to be a long-term shortage of psychiatrists.

“When you have an issue like this, there is no silver bullet,” Dallas said, “but we need to move forward.”