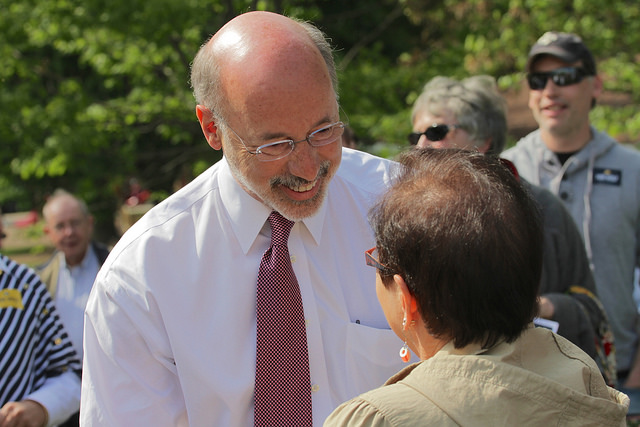 Now that we know that Tom Wolf will be Pennsylvania’s next governor, what does that mean for the state’s energy and environment landscape?

Will there be a severance tax on natural gas? And, if so, will it drive drillers out of the state?

Will Wolf stop the possibility of further drilling in state forests?

Will environmental groups continue to push for a moratorium? And what will be his response?

NPR’s StateImpact Pennsylvania posed some of these questions to energy officials and environmental groups.

Lou D’Amico, president of the Pennsylvania Independent Oil and Gas Association, told the news outlet that some drillers have discussed pulling out of the the state if Wolf implements a new severance tax. (Wolf said during his campaign that he wants to place a 5 percent tax on the market value of natural gas.)

And although he says the industry does enjoy bipartisan support in Harrisburg, D’Amico worries about lawmakers from non-drilling areas like Philadelphia.

“If you’re not seeing your hotels full, if you’re not seeing the local Ford dealer selling trucks to drillers, then you’re not concerned as much in Philadelphia [with the potential slow-down of gas drilling] as you are in Bradford, Tioga, or Susquehanna counties where they are benefiting from us being here.”

A big focus of Wolf’s campaign was that a severance tax could raise significantly more funds than the state’s current impact fee. That, in turn, could go toward decreasing the state’s budget deficit, and boost education funding.

“Wolf has gone on the record saying he does believe in maintaining the moratorium on drilling in the Delaware River watershed and that’s good news for the river,” said van Rossum.  ”On the other hand, he’s expressed his support for shale gas production by using it as a fundraiser for other budget-line items. And by using that money for education, health, the elderly, you create new constituencies calling for more shale gas development. But for all those constituencies shale gas development is a negative.”

That’s bad news for any drillers who may have been negotiating with the administration for those resources. It’s good news for park lovers fighting to keep the drillers out.

Cindy Dunn of the environmental group PennFuture says her group plans to hold Wolf to his promise.

“When Wolf is sworn in as governor, he will swear to uphold the state constitution, which includes the environmental rights amendment,” said Dunn. “And this is something that I think he will pay attention to.”

Dunn also said that Wolf needs to reform the state’s Departments of Environmental Protection and Department of Conservation and Natural Resources and address methane leaks from natural gas operations.