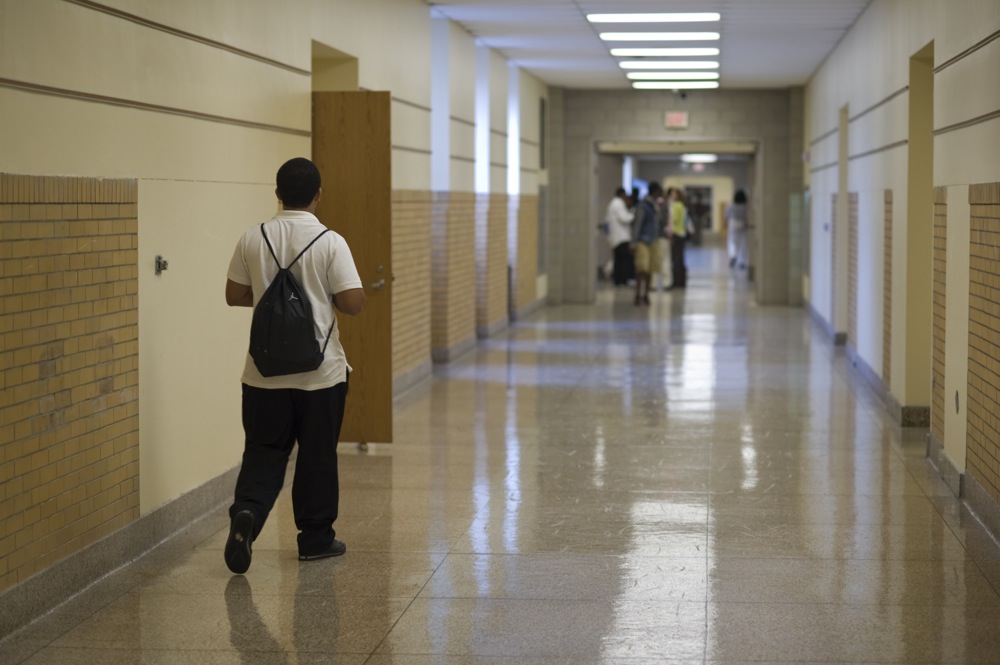 The Pittsburgh Public School District embarked last fall on an expansive plan to change historic Westinghouse High School, one of the city’s lowest performing schools, into a prestigious single-gender academy.

The reconfiguration of the school included student uniforms, a new trimester schedule, expanding the high school to include middle-school and developing leadership skills in students. The question many are still asking is 'Why did it fail so quickly?'

For students at the Academy at Westinghouse, Sept. 27 was a much anticipated day.  After a month of separate classes and lunch periods, boys and girls at the Homewood school could eat together for the first time.

The cavernous cafeteria was full of laughing, jostling, flirting, noisy kids. The sounds bounced off the brick walls. In other words, it was perfectly normal.

“They’ve been looking forward to this all week,” Gabrielle Fischer, a ninth-grade English teacher, said at the time.

But little else at the historic school in Homewood was what anyone would consider normal.

Educators in the school described a breakdown in support from district administrators that resulted in a chaotic atmosphere. There were constantly changing schedules, no class lists, no computer program to keep track of attendance or grades; boxes of supplies and materials clogged the hallways.

Just 12 weeks into the semester, Pittsburgh Public Schools Superintendent Linda Lane announced that the plug would be pulled in February on the grand experiment. The chaos, poor training materials and the threat of a complaint by the ACLU were given as reasons for the failure.

In a recent interview in her Oakland office, Lane  acknowledged that she would continue to take responsibility for the failure of the experiment.

“I'm sure you’ve heard [it said], ‘Well, she needs to apologize to the community.’ And I have said I take responsibility for it. It did not go the way, certainly, I planned, and I do apologize.... However that doesn’t get things done. I can’t revise history. But what we can do is go forward.”

To facilitate that forward movement, Lane will meet with the community at Westinghouse on Feb. 16 at 6  pm.

But educators and community members say the problems at Westinghouse went deeper than the official reasons given for halting the long-planned changes.

Added to the dysfunctional atmosphere was a climate of fear among teachers and their supervisors. A walkthrough by district administrators just two weeks after school opened was the opening blow.

Observing the disorder in the school, administrators, who spent about 10 minutes in each classroom, met with the principals in the school and recommended that 16 teachers be hit with ‘improvement plans.’  Those plans, while positively named, are evaluations that are seen by teachers as a signal that their work is unsatisfactory.

Teachers, who had trained for weeks before the beginning of the school year and were ready to make a difference in the school, didn't feel good about the walkthrough, several of them said.

Westinghouse educators, all asking not to be named because of a fear of retaliation, said the teachers needed the district's administrators to be more supportive of what they were doing. Instead, about 40 percent of the teachers were given improvement plans, which made them feel like failures and undercut their morale.

"We were so positive," said one veteran teacher. "They come in and say we are at fault....This is the best staff I've ever worked with in my life."

The district's spokeswoman, Ebony Pugh, said the school system gave Westinghouse support in every way possible -- including additional custodians, support staff and Heinz fellows to help with leadership development. The school was already overstaffed for the number of students who were enrolled, she said.

At the same time, the media were watching. Westinghouse faculty and staff members felt their side of the story wasn't being told. They had suffered through multiple changes, improvement plans and new programs without any adjustment period. Computer programs still weren't working. Yet they felt they could not speak for fear of losing their jobs.

At the beginning of the school year, Westinghouse had three principals to oversee the changes. They were Shawn McNeil, Kellie Abbott and Heath Bailey. McNeil and Abbott were from the district's prestigious Pittsburgh Emerging Leadership Academy, or PELA program. Bailey, who resigned in early November, is now a principal at the suburban Sto-Rox High School.

McNeil and Bailey declined to comment for the record. Abbott could not be reached.

McNeil had been put on an improvement plan on Oct. 6. Both he and Abbott were put on paid administrative leave a month later when Lane announced the district would abandon the single-gender plan.

In the midst of all the other changes, the school's leadership was replaced by Shemeca Crenshaw, a former Westinghouse principal.

Many Westinghouse teachers said that they were left in the dark about the displacements. The people they had been working with for months suddenly disappeared.

Pugh has said standard protocol requires that district administrators stay silent on personnel issues. Lane and the assistant superintendent, Christiana Otuwa, came on separate occasions to the school to introduce Crenshaw and to answer teacher concerns, she said.

However, Mark Brentley Sr., a long-time school board member who does not formally represent the Homewood community but has strong ties to the neighborhood, said he feels that the suspensions were unfair.

"They all are and were scapegoats," he said. "No matter how hard they worked. If we as a board and as an administration did not properly train them and prepare them...if we did not do that, you should not discipline them. We sent them into battle without a weapon."

The Westinghouse Wall of Fame, a collection of 100 photographs of the school's graduates who went on to success in business, music, sports, entertainment and civil rights, is a reminder of the glory days of what some in the community still refer to as the 'House.

A strong alumni association is an active presence in the community. And the Homewood community feels a collective sense of ownership and pride in the school. Neither group has been happy with the many changes at Westinghouse.

Even the changes in the name of the school --  from Westinghouse High School to the Academy at Westinghouse to, currently, Pittsburgh Westinghouse -- are emblematic of the community's feelings of being shut out of discussion about changes at the school.

At a meeting with school administrators in the early fall, about 50 community members went to what they thought was an open meeting about changing the school's name, according to Homewood resident Lucille Prater-Holliday. But at the door, they were told that participants had to be invited and the group, including two people with canes, were turned away.

"The community was outraged," Prater-Holliday said, adding that she thought the community should have had a voice in the name change.

Pugh, the district's spokeswoman, said the school's principals selected the participants, who included community members and students, in accordance with school board policy. She confirmed that the meeting was private and not open to the public.

In late September, some Westinghouse students were becoming more comfortable with the planned changes in the school.

“I was nervous because I just thought it was going to be a lot of drama,” Tatyana Kellum, a ninth grader at Westinghouse, said. She added that it “got good over time.”

But it wasn't easy for everyone.

One teacher noted the case of a bright young man she thought would someday be student council material, even at the top of his class.  She watched as he transformed from a generous, high-achieving student to a scared, defensive boy. He later transferred from the school.

"He had a meltdown and I've watched it  here with many students," the teacher said. "I don't think the families know how bad it really was."

Despite the turmoil, Westinghouse students are still expected to show up on time, do their homework and pass achievement exams in a few weeks.

Lane said she hopes the meeting on Thursday evening will help the community heal and make Westinghouse "the place the kids deserve."

"I personally want to hear from parents and families," said Lane. "What would be something that they would be willing to jump in and support?"

"The community is prepared," he said. "They want to hear answers. We've lost one whole year."

The short-lived experiment at Westinghouse High School is chronicled in Single-sex classrooms: the Westinghouse experiment, a slideshow by Pulitzer Prize winning photographer Martha Rial. Students talked about their experiences in September and October, 2011, when they were in the midst of the changes.