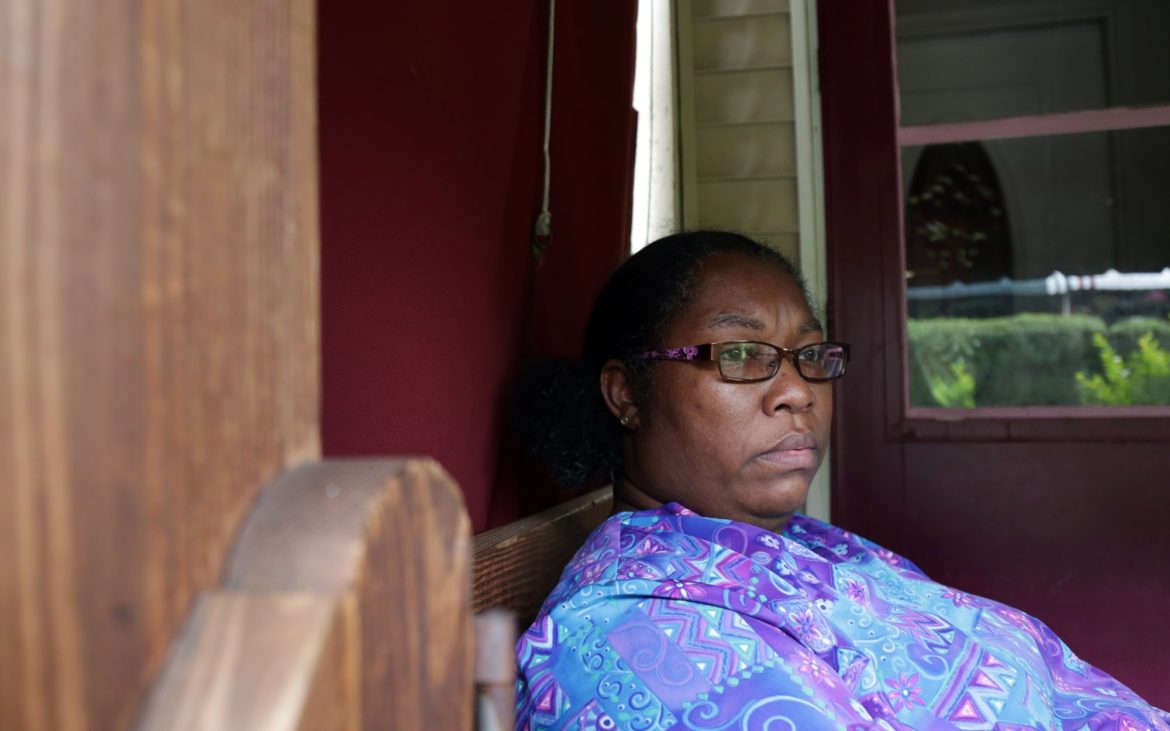 Kimberly Branch has lived in the same Hill District home for nearly 20 years. As a foster mother and parent, she's raised some 40 kids inside the home. The Pittsburgh water authority has not yet concluded if the private side of her service line is lead or not. (Photo by Ryan Loew/PublicSource)

The news comes inside an envelope with all-caps red lettering that reads, “IMPORTANT INFORMATION REGARDING LEAD WATER SERVICE LINES ENCLOSED.”

In January, the Pittsburgh Water and Sewer Authority began the daunting task of cataloging the material of its 70,933 service lines to determine how many are made of lead. To date, they've inspected nearly 1,750 lines across the city, and some city residents are beginning to receive their results in the mail.

But for the majority of those inspected, the result came back as another question mark. The inspectors either couldn’t find the line or couldn’t get a good enough view of it to determine its make-up.

Once the lid is off

Kimberly Branch has lived in the same Hill District home on Webster Avenue for nearly 20 years. As a foster mother and parent, she's raised some 40 kids inside the home. Six people live there now, including her 4-year-old granddaughter, Kiya, and 10-year-old grandson, Keise.

Out of 98 conclusive curb box inspections in her neighborhood, 46 of them have lead on the public side.

In late April, a PWSA crew came to Branch's house and inspected her service line. At the time, the crew told her that the public side of her line turned out to be copper but that her side is, unfortunately, lead.

PWSA is attempting to notify residents by mail of the inspection results within four to six weeks, but Branch has yet to receive a letter from PWSA with her results. The city's GIS site confirms what the crew told her about the public side, but says the private side is undetermined.

The confusion is frustrating. It’s better to know. Branch, a 45-year-old medical assistant in orthopedics at Shadyside Hospital, said her family drinks the tap water. When her father tried to pick up the city-distributed water filters from a nearby fire station recently, he was told they were out.

“I'm very upset,” Branch says of the uncertainty. “It's not like I just moved here. I've been here almost 20 years. I've raised a lot of kids in this house and I would not want to be directly responsible for somebody's health that I may have put at risk because we were living in this house with that problem.”

Branch mentions that none of her children have ever been determined to have elevated lead levels at their annual check-ups, but she still felt dismayed when the PWSA crew told her it looked like she had lead on the private side.

“My last group [of foster children] I had five boys, five girls. So we all lived in this house together. Now you're telling me that we all could be suffering from what's going on in the water line?” she said.

You can't inspect something you can't find. Of the 1,749 curb box inspections that PWSA has placed online, they weren't able to locate the curb box for nearly 10 percent of them and couldn’t access almost 8 percent more.

“Sometimes it's on the property line. Sometimes it's right in the sidewalk where it’s supposed to be. Sometimes it’s in their yard. Sometimes it’s behind a retaining wall. So it varies,” says Sarah Bolenbaugh, a senior engineer with Mott McDonald and part of the PWSA program management team for its curb box program. “Sometimes they're in the street, actually.”

In cases when PWSA is able to find and access a curb box, a contractor pumps compressed air into the cavity to clear away mud and debris. Then, the worker lowers a small camera inside the cavity to visually inspect the line material. Lead pipes have a distinctive, bulb-shaped “wipe joint” that distinguishes them, but often they are too obscured to make a determination.

The crew makes whatever determination it can on-site and photos from the inspection are uploaded into a database for another team, back at PWSA headquarters, to examine again. They want to make sure they've reached the right conclusion.

“The worst thing we can do is say its non-lead when it's actually lead,” Bolenbaugh said.

Regina Anderson, 74, lives across the street from Branch in the Hill District home she grew up in. She’s certain of her line makeup: a letter from PWSA informed her that both the private and public portions were made of lead. Regina Anderson lives in the Hill District home she grew up in. A letter from PWSA informed her that both the private and public portions of her home's service line are made of lead. (Photo by Ryan Loew/PublicSource)

For months the city had insisted PWSA was only legally allowed to replace the public side of lead service lines. In June, Mayor Bill Peduto’s office proposed legislation that would allow the city to replace both the public and private portions. On Wednesday, City Council discussed the measure for the first time, marking the first action on the bill since similar legislation stalled in Harrisburg. Once the state budget is complete, it is expected that legislators in Harrisburg will return to its bills.

“The Wolf administration supports legislation currently in the General Assembly, which would allow full lead lines to be replaced by PWSA,” Neil Shader, press secretary for the state Department of Environmental Protection [DEP], wrote in an email.

Despite the political maneuverings to allow the city to replace both sides of the line, right now the cost of replacing the private side still falls to the homeowner. Currently, letters to homeowners include language that refers to the service line as a “shared responsibility” between PWSA and the homeowner. There's also a flier detailing a low-interest loan program for service line replacement available through the URA.

Anderson says she's not too worried about the lead lines. She drinks only bottled water and she has no young grandchildren. But she is concerned about the potential cost.

“It’s not our fault we got lead in the water,” she said. “Look how long these pipes have been underground. Probably was underground before I was born.”

One exception to the suspension is when lead is found on the public side but the private side is copper or a similarly safe material. Because there is no health risk, PWSA will go through with that partial line replacement.

That is the situation that Giovanni Ruiz finds himself in. Ruiz lives on Eldridge Street in Squirrel Hill. Of the 213 curb box inspections performed on his street and four neighboring streets, 92 came back with a conclusive result of lead or non-lead; 67 of those were made of lead.

PWSA inspected Ruiz’s curb box in March and he received the results July 9. The letter, like Anderson’s, indicated that PWSA would replace the lead portion. PWSA inspected the curb box outside Giovanni Ruiz’s Squirrel Hill home in March. He received the results on July 9, which showed that the service line to his home is lead on the public side, copper on the private side. (Photo by Ryan Loew/PublicSource)

A year ago, when the agency promised it would replace the required 7 percent, then-Executive Director Bernie Lindstrom wrote that PWSA would accelerate that pace to “a minimum of 2,000 lead service lines per year.”

PWSA is operating on the assumption that 27 percent of public service lines are composed of lead, though estimates provided by a PWSA-hired contractor range up to 46 percent.

“I think everybody involved with the program recognizes that number is going to change as we round out and complete the curb box inspections and the digitization of our historical records, which are still works in progress,” Pickering said.

Currently, PWSA has two crews of three workers performing curb box inspections, and their findings will help determine a better estimate. PWSA has plans to hire more crews to speed up the process and they plan to raise the issue before the board of directors in coming weeks.

The curb box inspection process begins with a door hanger that notifies residents two weeks ahead of time of a pending curb box inspection. The results should come four to six weeks after inspection, but Bolenbaugh acknowledges, “We’re a little behind.”

If the result of the inspection comes back as inconclusive and there is no historical record indicating a home has a copper line, PWSA will send a crew out to perform an exploratory excavation, which consists of digging a 4-foot-by-4-foot hole around the curb box to determine the service line’s makeup. A letter from PWSA states that both the private and public portions of the service line to Regina Anderson's home are made of lead. (Photo by Ryan Loew/PublicSource)

Pickering says the excavations cost about $900 each to perform (a cost PWSA covers.) They try to avoid trees or landscaping around the curb box but sometimes it's unavoidable. PWSA will reseed grass if the excavation takes place in a yard and replace any sidewalk they dig up.

PWSA plans to solicit contracts for less intrusive excavation methods in the near future, such as vacuum or hydro excavation, but until then crews will continue to conduct these exploratory excavations on undetermined service lines.

Once the line replacement program restarts, PWSA will provide residents with at least a 45-day notice before replacing the public portion of the service line, but there is no standardized timeline for them to actually complete the removal.

As it says in the notification letter: “Your inspection will automatically be added to our database of lead service lines, and your property will be put on a schedule for eventual replacement.”