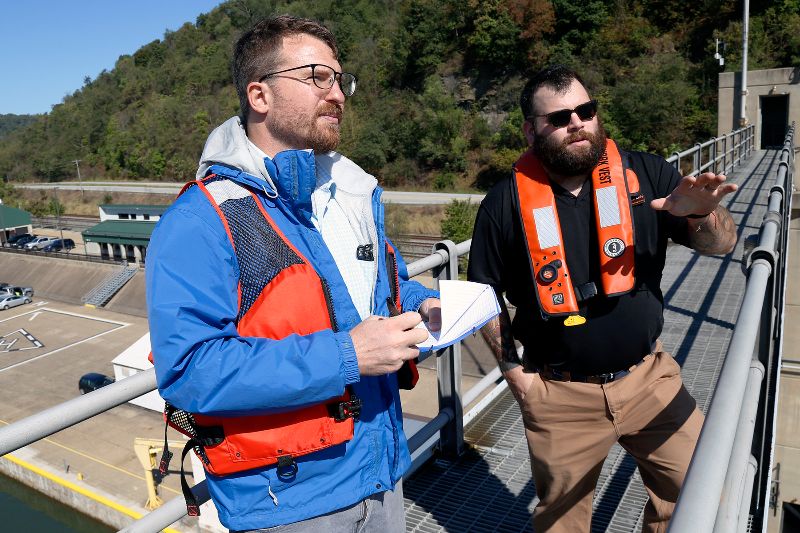 Oliver Morrison talks to the Army Corps of Engineers about one of their lock and dam projects for a story about the Ohio river. (Photo by Ryan Loew/PublicSource)

A reader emailed me at the end of October asking if I knew what had happened to the water supply in Neville Township. I didn’t.

Some reader tips don’t go anywhere but some of my best stories start with readers.

So I emailed the Department of Environmental Protection’s regional information officer to see what she knew about why Neville residents were told not to consume the water for days. I received a quick response: The state agency had to do emergency testing for PFAS chemicals because a firefighting foam containing the toxics had discharged into the drinking water source.

Donate to support our reporting

Over this past year, I’ve tried to learn, report and turn myself into a mini-expert on PFAS chemicals. I first learned about PFAS in 2018 during a talk by Rob Billot, a lawyer who sued Dupont for PFAS contamination at a site in Parkersburg, West Virginia, not far from Pittsburgh. (Mark Ruffalo portrays Billot in the movie “Dark Waters,” which was released in November.)

Since that talk, I’ve been investigating PFAS contamination at the region’s two military bases and the Pittsburgh airport. Though PFAS contamination can spread outward, the laws aren’t strict enough to force either of them to test for contamination in nearby drinking water wells. And even though my reporting has proven that contamination is likely, it’s difficult to tell how many people might be affected.

PFAS contaminants are an emerging environmental threat and there is a lack of awareness about the gravity of the threat they pose. But they have been associated with health consequences, including elevated cholesterol, liver dysfunction, disruption of the immune system and kidney cancer.

So, when I got that tip and response from the DEP, I immediately reached out to the township manager in Neville Island. She didn’t return my messages. One board member returned my call but told me to never call him again. While many of the residents I talked to seemed happy with the town’s response, a couple were confused about why there was so little information about what happened and why they didn’t name the company responsible. 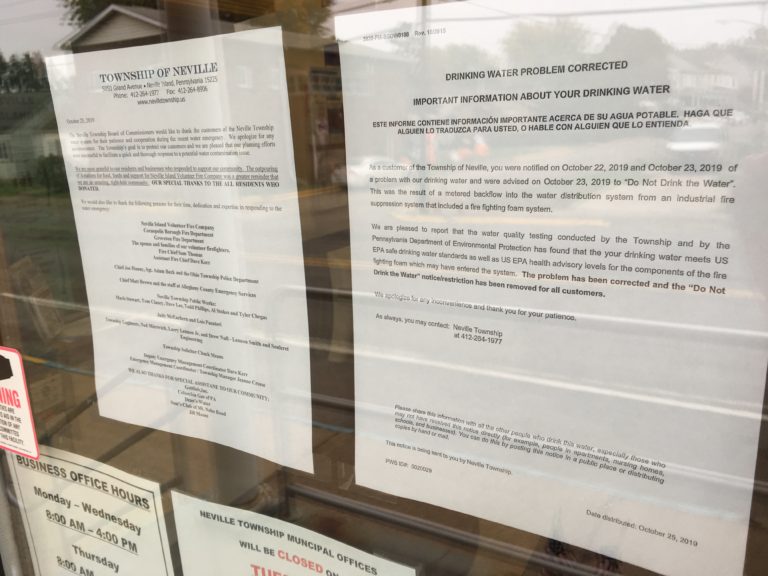 When I showed up at a township board meeting, there were only two residents in attendance and no other members of the media.

I’m well aware of the devastation to local news in the region but it was still shocking to see the lack of accountability. If I hadn’t of been at the meeting, whatever happened might have been relegated to rumors swirling around Facebook.

At the meeting, I saw how difficult it was to deal with the emerging PFAS threat. The township officials didn’t seem alarmed that residents could’ve been drinking PFAS chemicals for as long as a month.

The meeting made me grateful for all the time I’ve been given at PublicSource to build my expertise. My editors even sent me to North Carolina to spend a week at a PFAS-focused conference to learn how toxic these chemicals can be. If I had not been given that time to investigate, I probably would’ve looked at the DEP’s water tests — which showed that the water was safe now — and not thought more of it. But because I’d been given time to go deep, I knew how dangerous the chemicals can be, even in very low doses.

As you’re thinking about where to donate your money this year, I want you to picture in your mind all those empty chairs at Neville Township’s board meeting. Imagine how many meetings like that are happening all across our region now. Then decide whether you want one of those chairs to be filled with a reporter.