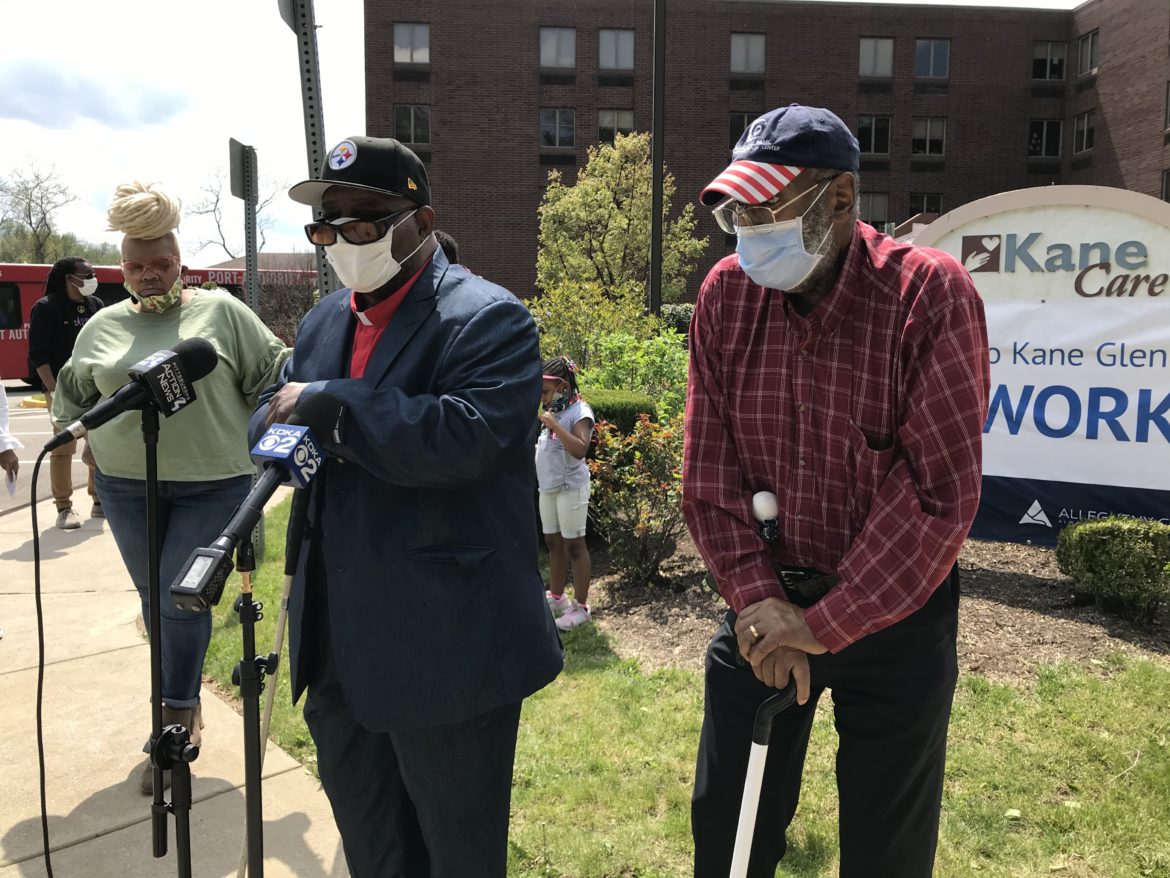 Rev. Lutual Love (center) of Praise Temple Deliverance Church addresses the media on May 15 outside Kane Community Living Centers-Glen Hazel over community concerns about the county’s handling of the COVID-19 infections and deaths at the home. (Photo by Nicole C. Brambila/PublicSource)

Update (10/21/2020): Three law firms across the Pittsburgh-region on Oct. 21 filed a lawsuit against Brighton Rehabilitation and Wellness Center in Beaver County, alleging that poor infection controls, staffing issues and policies put nursing residents at risk. The filing in Common Pleas Court in Beaver County lists 15 residents, 10 of whom died from COVID-19 from April 15 through Sept. 18. Bob Daley, an attorney representing the plaintiffs, told PublicSource he believed this was the first wrongful death and professional liability lawsuit against a nursing home in Pennsylvania, but not likely the last. “Well over 50% of nursing homes in the United States and probably the Commonwealth have reported no deaths,” Daley said. “Sometimes a case or two is inevitable, but it’s not inevitable to have all these deaths.”

The deadly COVID-19 outbreaks in Pennsylvania’s nursing homes accentuated existing cracks in the system that provides care to some of the state’s most vulnerable residents. And the devastation could run unabated without significant changes to caregiving oversight.

“There’s going to be a lot of finger pointing and hand wringing,” said David Hoffman, a former assistant U.S. attorney in the Eastern District of Pennsylvania and an early leader in using federal false claims litigation against nursing homes.

For all the public discussion about protecting healthcare workers and seniors, who are particularly vulnerable to the novel coronavirus, little attention was paid early on to nursing home residents and staff.

Although those missteps proved fatal, the hard-won lessons that resulted in visitation restrictions, screening protocols and personal protective equipment can inform the path forward. But density and demographics mean — even if rising humidity tempers transmission this summer — nursing homes will continue to grapple with outsized virus caseloads.

“If the rest of the country is even slightly contagious, nursing homes are going to get hit really hard,” said Ron Fricker, a Virginia Tech College of Science statistician. “They’re the canaries in the coal mine.”

The challenge in the weeks and months to come will be whether real progress can be made to address systemic problems that have plagued Pennsylvania’s nursing homes for decades.

Many doubt it can be done.

According to industry experts, disease forecasters, lawyers, lawmakers and advocates, the fallout from the unfolding failures will likely come on many fronts: civil lawsuits and criminal prosecutions that could hobble the ability to provide quality care; budget cuts that threaten funding; and a possible contraction in facility ownership.

In Pennsylvania, about six of every 10 COVID-19 deaths were residents in nursing homes and long-term living facilities. As of June 2019, roughly 76,000 people lived in the state’s 697 nursing homes.

Nationally — and this is a moving target because not all states are publicly identifying these cases — at least 28,000 residents and staff of nursing homes have died.

The devastation promises demands for accountability.

The calls are already coming in.

After the pathogen swept through a nursing home in Beaver County, killing dozens of residents, U.S. Rep. Conor Lamb, called for a federal probe into the facility’s inability to prevent infection spread. 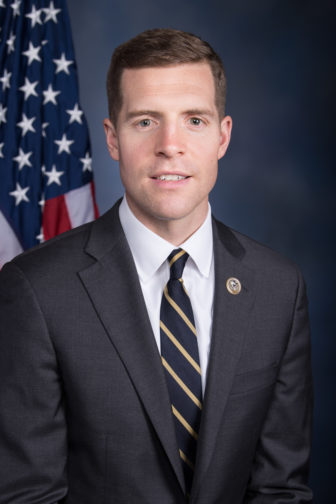 “In Western Pennsylvania, Brighton Rehabilitation and Wellness Center is a concrete example of the risk to our seniors with over 400 presumed positive residents and over 60 COVID-19-related deaths, “ Lamb and U.S. Rep. Mike Doyle, D-Forest Hills, wrote in a May 5 letter to federal regulators requesting increased inspections.

Brighton is also the subject of a federal class-action lawsuit filed against the Pennsylvania Department of Health [DOH].

Filed by four firms, including the office of Pittsburgh attorney Peter Giglione, the lawsuit alleges inspections had “come nearly to a halt,” resulting in a lack of state oversight related to infection control during the pandemic. This, the suit argues, led to experimental testing on an 81-year-old dementia patient, who received a combination of hydroxychloroquine and zinc intended to prevent infection.

“It is unlikely that such egregious conduct could have occurred had inspections not been halted,” the April 28 suit against the state said.

The unraveling crisis — Giglione and others said — is a result of chronic staffing shortages and the failure to control infection spread in facilities.

“It’s the perfect environment for a virus like this to take hold,” Giglione said. 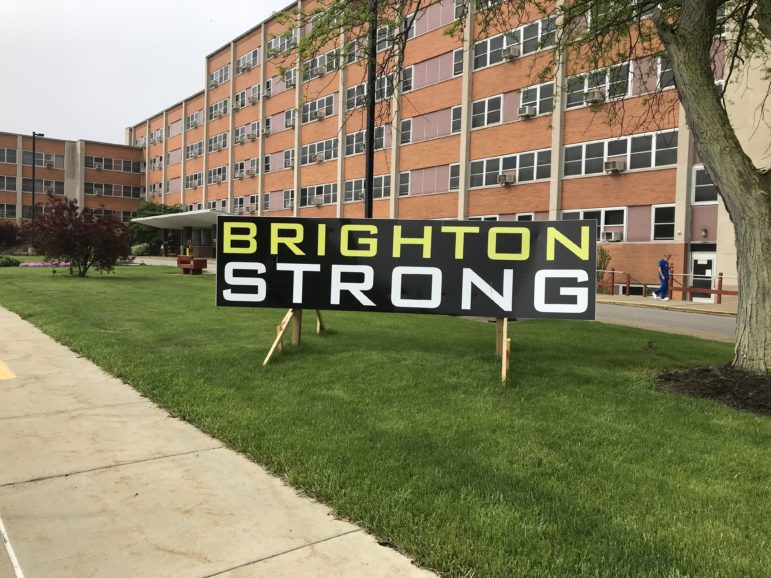 Lawsuits significantly drive up liability insurance costs for nursing homes, leaving less money for care (about 5% less per year), according to a 2006 report by the U.S. Department of Health and Human Services. However, lawsuits can also positively improve the quality of care, albeit slightly, when nursing staff ratios are increased as a result of the litigation.

Even before the virus struck, infection control had been a protracted problem in the United States.

Infections are the leading cause of mortality in the nation’s nursing homes. Since 2016, regulators have cited 63% of facilities for one or more infection control deficiencies, according to a Kaiser Health News investigation. Among those cited: Brighton and Allegheny County-owned Kane Community Living Centers-Glen Hazel, which as of Friday, May 22, had 78 cases and 18 deaths.

Hazelwood residents recently held a protest outside Kane-Glen Hazel, calling for greater transparency from county officials about their handling of the virus.

“Once they said vulnerable seniors, they should have thought of nursing homes,” said Rev. Lutual Love of Praise Temple Deliverance Church.

Advocates for the elderly worry state budget shortfalls could result in funding reductions to nursing homes, threatening the ability of facility owners to provide quality care.

In April alone, Pennsylvania saw tax revenues plunge about $2.2 billion, according to estimates by the Independent Fiscal Office.

Medicaid, the federal safety net for the poor and elderly, is paid for with state and federal dollars. Even in normal budget years, the Pennsylvania Health Care Association [PHCA] has complained flat Medicaid reimbursement rates haven’t kept pace with escalating costs.

PHCA is an industry group for long-term care facilities, which include nursing homes.

Now providers, according to PHCA, are facing a 400% surge in expenses associated with, among other things, skyrocketing costs for critical supplies and increased payrolls that have added hazard pay for frontline employees.

Yarnell added, “I think the challenge is that there’s going to be a cuts-only approach.”

The fallout from COVID-19 outbreaks could increase the churn in nursing home ownership and possibly push more into the hands of owners that see them as real estate deals rather than facilities that provide mission-driven care.

“The owners have no clue how to run a nursing home,” said Charlene Harrington, a University of California, San Francisco professor emeritus of sociology and nursing, who has studied nursing home care issues for decades. “They’re in it to make money. They’re real estate people.”

It’s an issue highlighted with the financial collapse of Skyline Healthcare LLC in 2018. Just 14 months after the DOH approved a former New York insurance broker expanding in the Keystone State, he couldn’t feed his residents, forcing the state to step in with a temporary manager. Ultimately, Skyline went out of business.

“Without a meaningful investment in the state’s Medicaid program — and given the significant financial challenges facing providers as a result of ongoing COVID-19 response efforts — we’re concerned similar closures could begin to occur here in Pennsylvania,” Shayna Varner, a PHCA spokeswoman said in an email.

“Once this is over we need to have a careful look at how long-term care is provided and the money spent in the system,” Smetanka said.

Staffing is universally recognized as the key to quality care.

The reason is straightforward: quality nursing home care requires hands to do the work. The coronavirus exploited this, running unimpeded through short-staffed facilities.

What’s needed in the wake of a climbing death toll in nursing homes, Casey said, is a long-term approach to policy making and a greater investment in care.

Advocates have raised concerns about the quality of care since before the federal Nursing Home Reform Act created minimum standards in 1987.

“The problem with nursing homes is that staffing was low to begin with,” said Diane Menio, executive director of the Philadelphia-based Center for Advocacy for the Rights and Interests of the Elderly. “They’re working short a lot of days.”

The U.S. Department of Health and Human Services inspector general is expected to release a report later this year on the lack of federal oversight, after the New York Times found nearly 1,400 nursing homes reported having fewer registered nurses than required or failed to provide payroll data.

“We’ve got a lot more to do on oversight, transparency and bipartisan solutions to this,” Casey said.

Advocates, though, have been here before.

“The big concern is, we’ll have this outrage and then it’ll pass,” said Hoffman, the former prosecutor. “I can only hope that something comes of this.”

Lessons learned and the future

The weeks to come at nursing homes across the state likely won’t look much different.

Facilities have been on lockdown since March 13 when the Centers for Medicare & Medicaid Services [CMS] recommended facilities cancel group activities, communal dining and restrict visitors to reduce risk. Allegheny County officials have said visitation restrictions at county-owned homes will continue even when the county moves into the green phase as outlined in the governor’s reopening plan.

That may need to change, Hoffman said. 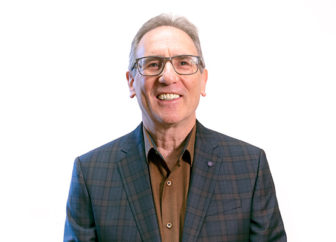 David Hoffman, a former assistant U.S. attorney in the Eastern District of Pennsylvania.

Imagine a system where nursing home operators can act more quickly because they don’t have to wait for regulators to grant an exception in emergencies, he continued. “This is something that needs to be re-evaluated in a meaningful way.”

Another change may need to come to the physical design of the facilities.

Most facilities are a cluster design with dozens of residents living in a wing with two or more people in a room.

“We’re probably going to need to spread out more in the building,” Biondo said during a press conference on May 8.

The Allegheny County Area Agency on Aging [AAA] provides services designed to keep those aged 60 and older out of long-term care facilities and in their homes.

“It is the mission of the Area Agency on Aging is to allow seniors to age in place,” said Kurt Emmerling, deputy director of the Department of Human Services’ AAA.

Paid largely from Lottery funds, AAA services run the gamut from ride-share and companion programs to meals and personal care.

Still, the impending gray tsunami of baby boomers turning 65, the demographic most likely to need long-term care, means nursing homes will continue to be an important source of care for the foreseeable future.

“I think we’ve done a good job of failing our seniors and the people who care for them,” said Yarnell, with the union.

“I think we have a values problem in this nation,” he added.

This story was fact checked by Emma Folts.