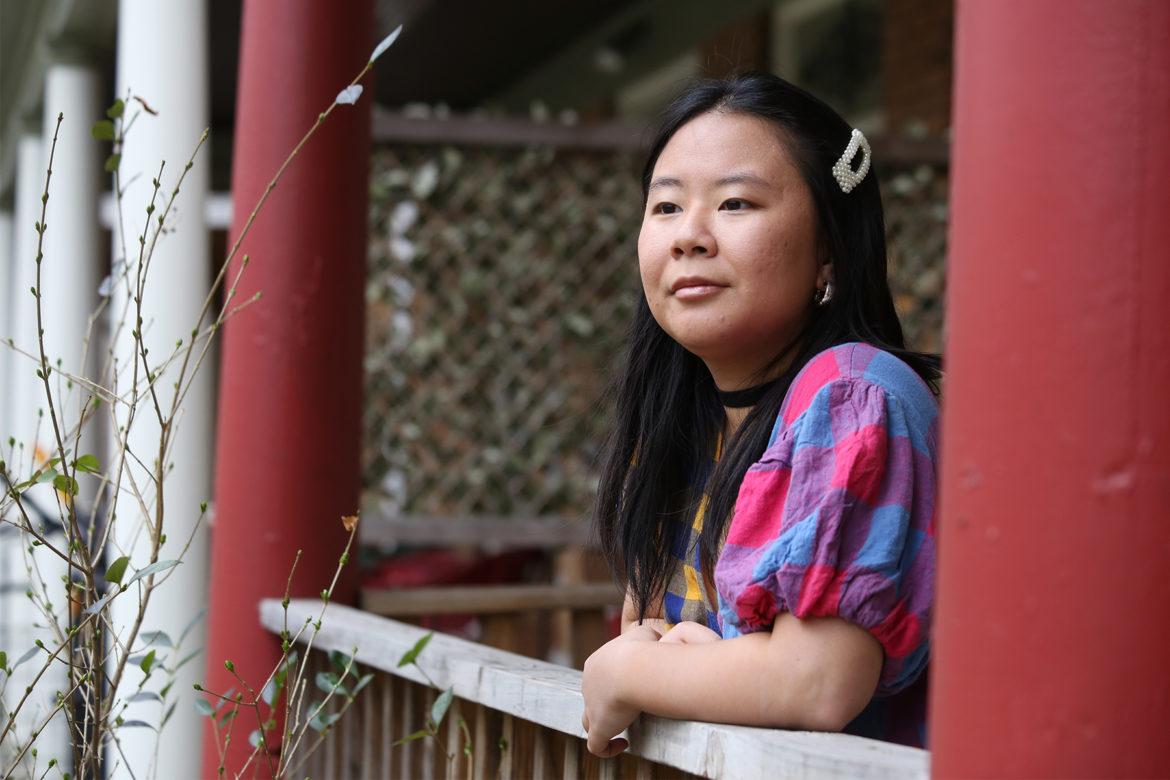 Elina Zhang photographed outside her home. (Photo by Ryan Loew/PublicSource)

At the beginning of this year, I became obsessed with foraging for vintage objects. I spent hours perusing Facebook Marketplace. Unsatiated, I started following vintage Instagrammers in Pittsburgh; one bio described their account as selling “joyful and thoughtfully chosen thrifted home goods.” Local Pittsburghers sourced thrift stores, estate sales and their grandma’s attics, populating my Instagram feed. I found myself impulsively buying a Le Creuset Dutch oven shaped like a tomato, delicate beaded grapes and pears, and a mid-century modern wooden cheese plate.

A day after the massage parlor massacre in Atlanta of eight people, six of whom were Asian women, I saw somebody on vintage Instagram post a collection of art they owned, including an embroidered image of two Geisha women. The caption said, “New Treasures for myself… Not for sale (yet).” My stomach clenched, and I sent them a direct message, voicing my discomfort.

I’m not sure if I would have reacted as strongly if I wasn’t thinking about the gunman and his “sexual addiction,” with the parlors being a “desire he wanted to eliminate.” The image of the two Geisha women made me think of the ways I have been refracted into a thousand versions of myself — sexy, docile, elegant, deferent, soft, beautiful — until I no longer know who I am.

As a teenager growing up in the Deep South, I had no idea how to model myself as somebody who was sexual or attractive or desirable. I knew Asian women were supposed to be beautiful and sexy, but I didn’t feel like any of those things. In the Chinese-American community I was a part of, Tian Tian was the most popular Asian- American woman. I had heard my parents talking about her, how she played guqin, a traditional Chinese string instrument, and aspired to be a surgeon. In person, she had an ethereal quality to her — she was tall with long black hair draped down her back. She was beautiful and lovable.

Tian Tian was the Chinese-American woman I aspired to be, only to utterly fail. When Tian Tian was in high school, she had a white boyfriend and went to high school football games. When I was in high school, most of my friends weren’t dating, instead spending after-school time studying at the local Panera or Waffle House. All the Asian girls were interchangeable; my friend Joanna was called Elina, and I was called Joanna. It happened enough times that correcting someone was confrontational. In the pictures we took, people would pull their eyelids back, and we would too because we thought it was funny.

This week, as I continue to mourn the women murdered in Atlanta, I wonder what relationships these women left behind. Who will be the keepers of their stories and their things?

I didn’t want to blend in with the other Asian-American women in the room — especially not the quiet ones who refused to speak in class. I wanted to be seen. Given the opportunity, I would have loved to be the Asian girl the white lacrosse boy dated. And when finally given the opportunity in college, I lapped up all the “compliments” I could get. Your skin tone is so exotic, men would say during sexual encounters. I always thought Asian women exuded a special kind of beauty.

Is it even possible to see Asian women fully, completely? I was unable to see Tian Tian in her entirety. She, too, was someone I projected all my desires onto, as were the Asian-American women who I wanted to distance myself from. I’m Asian, but I’m not like that Asian. 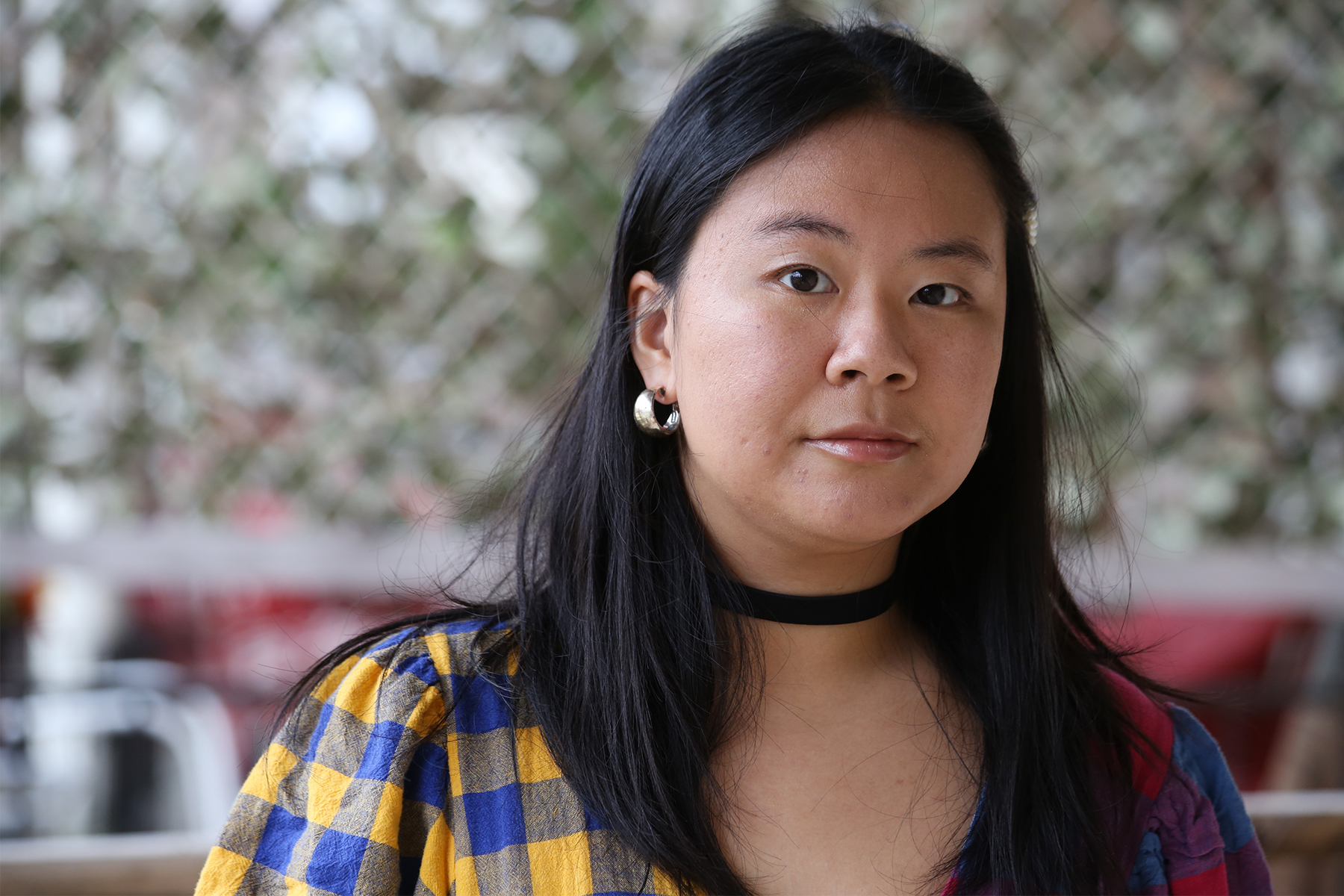 "I want to own beautiful things," writes Elina Zhang. "I want to feel at home in my things, and I want my things to say something about me. But objects don’t get to desire back. And the porousness between the Asian-American woman and the object is fraught with violent potential." (Photo by Ryan Loew/PublicSource)

Everything I know about desire and sex has emerged from my Asian-American femme identity, whether I was aware of it or not. So much of who I am already existed before I ever even arrived in this country. I existed in the porcelain people kept on display in their cabinets; I existed in frames and on walls in museums; I existed as a figment in the white imagination.

The author of the Instagram post said he was Chinese-American and that he wasn’t planning on selling the image, which by the way, he said, was authentic. “I am enjoying the image as I would art in a museum.” I’m not particularly interested in indicting the experience of owning beautiful objects. I want to own beautiful things. I want to feel at home in my things, and I want my things to say something about me. But objects don’t get to desire back. And the porousness between the Asian-American woman and the object is fraught with violent potential.

When my parents left China, they took very little with them. My brother and I were born in Finland, relocating twice to Canada and then to the United States. When my grandparents passed away, I didn’t inherit anything from them. Inheritance is something I know many white Americans take for granted, whether it is furniture or rugs or wealth.

Instead, my parents keep bad art my brother and I have made on their walls. They have saved homework and test prep books we’ve used. My inheritance will be the wealth that my parents have gained since coming to the United States, but it will also be the privilege of want, a privilege I don’t take lightly.

I want my bedazzled grapes and vintage cheese plate to signify something about me – my taste, my class, my personality. But I can’t escape the politics of aesthetics, and these things don’t get emptied of history when I bring them into my home. What do I owe these objects when I choose and purchase them? How do we relate to objects with more care and compassion?

This week, as I continue to mourn the women murdered in Atlanta, I wonder what relationships these women left behind. Who will be the keepers of their stories and their things?

Elina Zhang is a student at the University of Pittsburgh. She is working on a memoir about sexual violence and testimonies. If you want to send a message to Elina, email firstperson@publicsource.org.