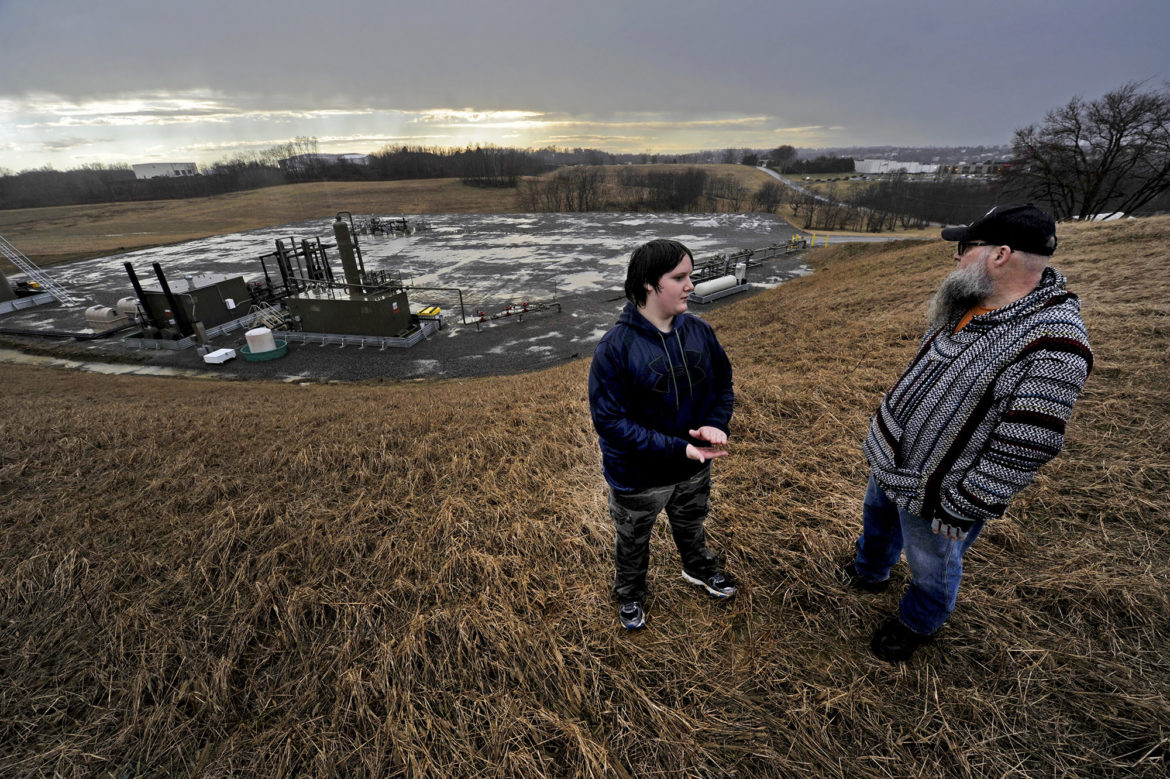 James Moore and his 15-year-old son Chakotay, stand in front of Apex Energy's Quest well pad in Penn Township in February 2016. The father and son are the closest people living to the shale wells, just 500 feet away, and participated in PublicSource's air quality monitoring project. (Photo by Connor Mulvaney/PublicSource)

It’s September 2015. James Moore and I are on his back porch in Penn Township, a quiet suburb 20 miles east of Pittsburgh. But on this fall day, it’s anything but quiet.

Roughly 500 feet away from the house he rents with his 15-year-old son Chakotay (Moore is a die-hard Star Trek fan), a parade of trucks hauls equipment and sand onto a Marcellus Shale well pad.

Sand shoots into two behemoth trailers before it churns together with chemicals and water. Engines purr as machines pump the mixture down wells to break shale, freeing pockets of natural gas thousands of feet beneath the Earth’s surface. The gas will eventually travel through a pipeline to warm Pittsburgh homes the next winter.

This is hydraulic fracturing, better known as fracking.

Moore, 54, lives closest to the well pad. He has a scraggly chest-length gray beard and a style somewhere between ex-hippie and trucker. He’s wearing a blue tie-dye T-shirt emblazoned with a picture of a tiger covered in an American flag. He works at a nearby manufacturing plant that makes plastic medical parts. What really bugs Moore isn’t so much the fracking, but the diesel fumes trucks spit out when they chug up to the pad. James Moore isn't against fracking, but wanted to participate in PublicSource's air quality monitoring project in Penn Township because he was concerned about the potential of air pollution from a shale gas operation 500 feet from his home. (Photo by Connor Mulvaney/PublicSource)

Moore doesn’t have a problem with fracking. To him, the activity represents America’s “progress” away from reliance on coal. But you don’t have to be for or against gas drilling to have concerns about your air.

I’m here to help him and other residents living within a half mile of this shale site take air pollution measurements as part of a grant-funded journalism project. The gas site — Quest Realty Central Pad 7, being operated by Wexford-based Apex Energy — is home to Penn Township’s first shale wells.

Hidden behind a rickety wooden chair on Moore’s covered front porch, a small air quality monitor glows as numbers appear on a screen. Today the monitor is registering low numbers — that’s good. The device, called a Speck sensor, measures dust particles called PM 2.5 that are so tiny they can lodge in your lungs and bloodstream and cause a slew of health issues.

As the Speck gathers PM 2.5 data each minute from the front porch, on the back porch we’re struggling to operate another air quality device called a summa canister. It measures a different set of pollutants called volatile organic compounds [VOCs]. The canister sort of looks like a tiny alien spaceship. Stainless steel, cylindrical, with bolts and colored knobs. About the size of a basketball. It sucks in air over the course of a day.

I need a good sample to ship off to a California lab where the air we collect will be tested for 75 different VOCs — a class of pollutants that include hundreds of different chemicals. Some toxic, some carcinogenic.

But the canister isn’t keeping pressure like it should, so we’re fighting to tighten its bolts to keep air from leaking out. That would kill our sample.

“I’ll betcha it’s this one because I know I tightened that one,” Moore says pointing to a brass bolt.

“Ah!” he blurts out, “I got my beard on that one,” as his face mane snags on the canister.

If I said we knew completely what we’re doing, I’d be lying. All I know is we can’t screw this up. I’ve already blown two canisters and had to ditch the samples. And these things aren’t cheap. Fifty-five bucks a pop to rent the canister and $145 for the analysis.

“Annnnd...” Moore says in that drumroll-please kind of way, “needle is not moving! Steady at 20. That’s the one!” he says after tightening the defiant bolt, which stabilizes the canister’s pressure.

Welcome to the world of citizen science.

The shale gas and health mystery

I’ve reported on fracking for almost four years. I’ve heard the accounts of headaches, coughs, nosebleeds and sore throats. I’ve seen a former gas worker’s lip swell to the point of nearly bursting. I’ve interviewed a woman who lives 30 miles from Pittsburgh who said she’s struggled to breathe the air outside her home.

But most of these people couldn’t conclusively prove that their symptoms were caused by shale drilling.

For years, health experts have said these recurring issues point to an urgent need for increased air monitoring.

For years, health experts have said these recurring issues point to an urgent need for increased air monitoring.

A growing number of studies show the extraction of shale gas poses health risks. In October, the Pennsylvania Medical Society, a group of 16,000 physicians and medical students, called for a moratorium on shale drilling in the state because of the growing evidence. The society wants the state to fund a health registry and study the industry’s public health impacts.

Currently, neither regulators nor the drilling companies they police do the kind of localized air monitoring researchers say is needed to show cause and effect between pollution released by shale gas operations and people getting sick.

In the void, academics, environmental advocates and citizens groups — often on shoestring budgets — have tried to piece together the shale gas health mystery by doing their own air monitoring.

Sounds easy, right? Believe me, it's not.

In early 2015, I caught wind of a debate percolating in Penn Township over its proposed shale wells. Somehow, the area had remained remarkably untouched by the shale gas industry up until then. But that was all about to change.

Township officials made changes to the local zoning ordinance, opening up more than half of the community to fracking.

A familiar story unfolded. Some residents welcomed the industry with open arms, envisioning a future where their meager farming incomes would be subsidized by drilling leases. But others feared how fracking near their homes could affect their health and way of life. Will it hurt me and my kids? How will my air and water be affected? What’s a safe distance? Around the same time, I learned journalists in other states were using new, low-cost sensor technology to identify environmental impacts in communities. I asked my alma mater, Arizona State University, and journalism mega-funder the Knight Foundation for some grant money to set up an air monitoring project.

I knew I couldn’t interpret the data on my own (I’m not a scientist or health expert), so I collaborated with a team of public health researchers at the Washington County-based Southwest Pennsylvania Environmental Health Project [EHP].

Researchers there investigate air pollution near shale development. Full disclosure: The group gets a lot of flak from the gas industry for their work, but EHP maintains it is a public health organization that isn’t biased for or against industry.*

EHP provides air monitors to people who suspect shale gas operations could be polluting the air near their homes. They’ve monitored at more than 200 homes in Pennsylvania, New York, Ohio and West Virginia.

I went door to door in Penn Township and found Moore and four others living within 3,000 feet of the well pad who agreed to participate. The community’s first shale wells were drilled, fracked and combusted between June and late October 2015. From late August to late October of that year, we monitored air quality at the nearby homes.

Tomorrow, check in to find out what I discovered.

*PublicSource is funded by some of the same foundations as the Southwest Pennsylvania Environmental Health Project. We are not for or against shale gas drilling and we did this project purely as a fact-finding mission.

This project was funded by Arizona State University and the Knight Foundation. The Heinz Endowments also helped support this project.