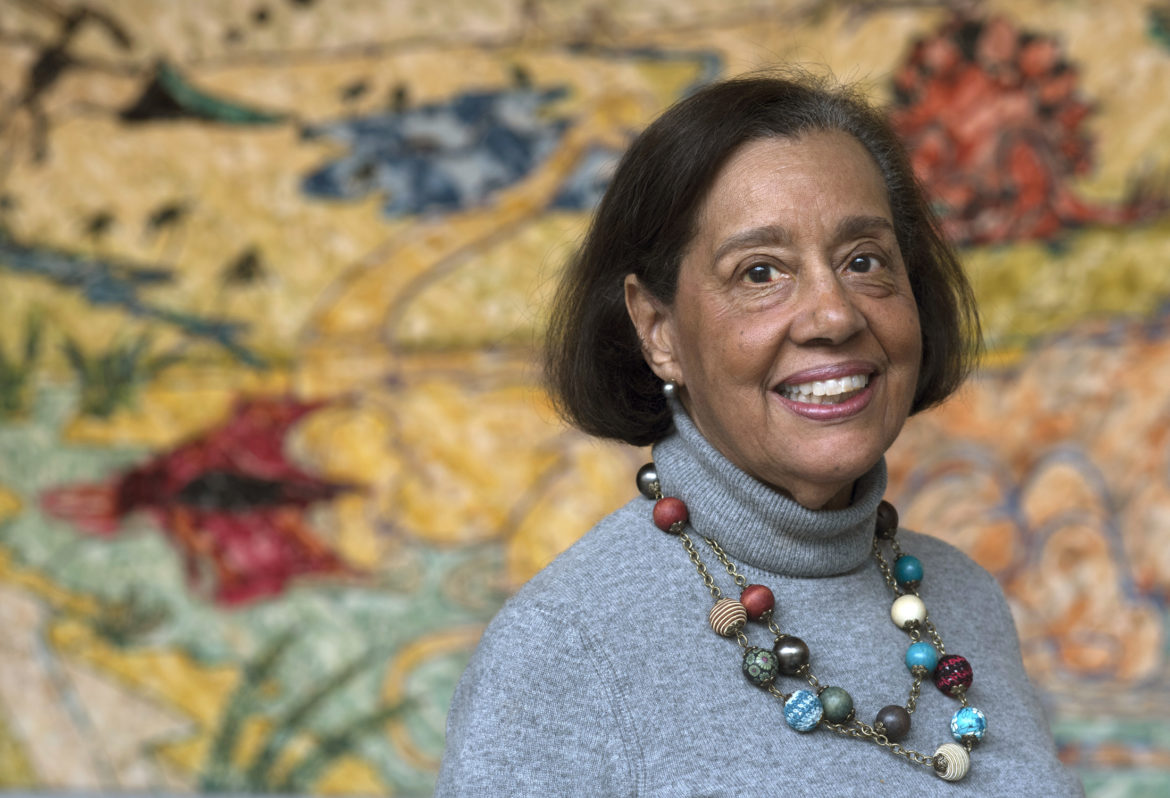 As a retired educator, Nancy Washington, 77, said the future of education is one reason she is participating in the Women's March on Washington. She will march with her daughter and granddaughter. (Photo by Martha Rial/PublicSource)

Nancy Washington, a 77-year-old Oakland resident, never marched for a cause. Yes, she has been a lifelong advocate for equal rights and, yes, social activism runs in her family. But the Women’s March on Washington will be her first.

Washington has experienced the consequences of not speaking out. During her career at the University of Pittsburgh, she worked hard to advance the rights of women and minority students and staff, but wished she had pushed longer and harder instead of opting out for early retirement.

But she immediately said yes when her oldest daughter Linda Armstrong, a physician, asked her to march with her and her granddaughter, Zoe, the day after Donald Trump is sworn in as the 45th president of the United States. “I want her to be proud of me and know that I am proud of the woman she has become.”

Washington feels she does not have much time left to stand up for her beliefs and voice her concerns over the direction the country may be heading.

As a third-generation teacher, Washington is especially concerned about the fate of education if it were to be turned over to the states, as well as health care and the environment. “I am worried about every little thing that could happen in the next few years,” Washington said. When she was younger, Nancy Washington said she was a bystander to activism of the time. She was focused on becoming a teacher and later raising her two children. (Photo courtesy of Nancy Washington)

She also sees her involvement in the march — which was planned as a rebuke to a divisive campaign that caused women and minorities to feel disenfranchised — as an opportunity to send a message to future generations.

Although she was not always socially active, Washington has long admired individuals who have the courage to stand up for their beliefs. Her father’s side of the family has a long history of working to advance rights for African-Americans.

“My great grandfather led escaping slaves to freedom through Pittsburgh’s Underground Railroad stops in the 1800s. I have a letter from Booker T. Washington thanking my grandfather for the assistance that he gave to him in 1903,” Washington said.

Washington tended to take after her mother’s side of the family and kept a lower profile. She remembers her Boston University roommate waking her up one morning in the late 1950s wearing a dashiki and beads. “I asked her what she was doing. When she replied that she was marching for freedom, I wished her a cheery good luck!”

Later Washington would become a prominent figure in the Pittsburgh community. Together with her late husband, Milt Washington, she was a founding member of the August Wilson Center. She wanted to help create a center where stories could be told from an African-American perspective and where relationships could grow. “August himself always said his work was about social justice, and this march is about justice.” she said.

On a recent afternoon visit to the Carnegie Museum of Art, Washington studied Henry Taylor’s whimsical painting of his son “Noah,” which she and her husband had gifted to the museum. The hopeful look in Noah’s eyes matched Washington’s optimism about what she would gain from marching. “I am going to feel better about myself. I actually did something. I made a statement finally,” she said.

Alison Kost, on the other hand, is a veteran of numerous social justice marches and rallies, going back to 1971 as a Penn State student protesting the Vietnam War. Throughout the 1980s, Kost pushed for reproductive justice around the region and voluntarily escorted women to women’s health clinics through angry throngs of anti-abortion protesters in Pittsburgh.

Kost and her husband, Clark Glymour, will leave their Shadyside home at 3:45 a.m. Saturday to meet up with Kost’s sisters in Monroeville, so they can travel as a group in one of the dozens of chartered buses taking Southwestern Pennsylvanians to Washington, D.C. Alison Kost at her Shadyside home. Kost is veteran of numerous rallies and protests to support abortion rights. (Photo by Martha Rial/PublicSource)

“It was really different then than it is now,” the 64-year-old nurse recalls. ”There was no Internet, no social media, no cell phones and no Megabus. We had to find our own transportation. Most of us did not have cars, so we looked for people who were driving there. Mostly we found people driving through word of mouth or on campus bulletin boards.”

Spurred by the “hateful rhetoric” spewed during the 2016 election cycle, Kost is determined to spend Trump’s first full day in office surrounded by women and men who are ready to defend their rights. “People have to do more than talk. I think we have to be more energetic and braver,” Kost said.

Kost wants younger generations to know it takes much longer to gain rights than it does to lose them. “There was a women’s suffrage procession one day before President Woodrow Wilson’s inauguration in 1913, seven years before women were given the right to vote. This was just over 100 years ago. We must never forget all the struggles throughout history to gain civil rights.” Alison Kost was photographed with her husband, Clark Glymour, and their daughter at an abortion rights rally outside the Federal Building in downtown Pittsburgh in the mid-1980s. (Photo courtesy of Alison Kost)

When Ginny Hildebrand, 68, of North Point Breeze, heads to Washington, D.C., this weekend, she will be retracing her 1978 path with busloads of other Pittsburgh women to support the Equal Rights Amendment. Despite that day’s 95-degree heat, the former steelworker and coal miner and now a dog groomer remembers how inspired she was by the gathering. Marchers were urged to wear all white in honor of the suffragettes.

“At first I thought it was silly,” she said, but she was inspired by the enthusiasm and diversity of the women she encountered, “Confidence is infectious.” Activist Ginny Hildebrand at her North Point Breeze home. Hildebrand will march in the upcoming Women's March on Washington. (Photo by Martha Rial/PublicSource)

Pittsburgh’s women’s movement was vibrant, but compartmentalized. There were numerous groups such as Women of Steel, local National Organization of Women chapters and PAAR (Pittsburgh Action Against Rape), but Hildebrand wanted more unity. “I was always trying to look for common ground to bring women together,” she said. Photograph of Nancy Carpenter (left) and Ginny Hildebrand (right) at the March for Equal Rights Amendment in Washington, D.C., in July 1978. Carpenter coordinated the buses to the march. (Photo courtesy of Ginny Hildebrand)

Hildebrand, a self-professed radical, believes marches are a central tactic to social change and estimates she has been involved in 50 social justice marches and rallies in the past half century.

“This march should have happened even if Hillary Clinton was elected. Too many in government don’t respect human rights,” Hildebrand said. “I hope this demonstration will help ignite widespread activism, solidarity and self-confidence. We must continue to mobilize and organize.