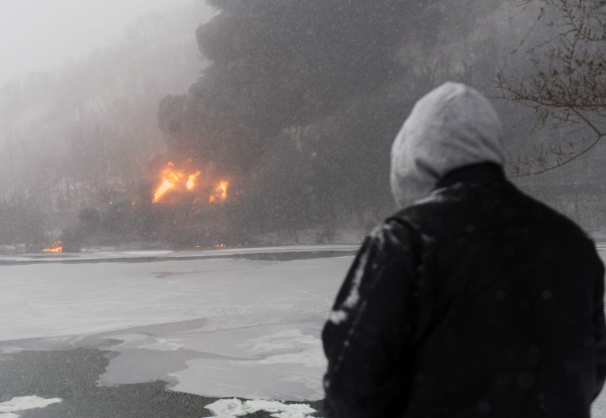 UPDATE: This story originally said that an oil tank car entered the Kanawha River in West Virginia. CSX has since reported that no tank cars reached the river. This story has also been updated to reflect new reports from CSX confirming that 27 tank cars derailed and 19 were involved in fires.

The accident, near Mount Carbon in Fayette County, sent massive fireballs into the sky, causing the evacuation of thousands of people. It threatened water supplies of nearby residents when the cars went into the Kanawha River.

“We're certainly concerned about the rail traffic in the state,” said Rob Altenburg, director of the energy center for PennFuture, a Pennsylvania environmental group. “[These cars] are carrying volatile fuel through Pittsburgh and Philly, and crossing waterways in other parts of the state,” he said.

Pittsburgh emergency response officials have finished a risk-assessment report on crude-oil trains coming through the city and Southwestern Pennsylvania. They are currently updating response plans in case of a derailment, Ray DeMichiei, deputy director of Pittsburgh's Office of Emergency Management and Homeland Security, told PublicSource.

Altenburg said the federal government needs to hasten the retrofit of older tank cars and that the Pennsylvania Public Utility Commission could hire more inspectors to look at rail lines.

“There certainly are steps that the PUC can take and we hope they are strongly considering that,” Altenburg said.

Twenty-seven tank cars derailed and 19 caught fire on a CSX train carrying oil fracked from North Dakota’s Bakken Shale to Yorktown, Va., the railroad confirmed. One house burned down and residents of two small towns were evacuated and West Virginia’s governor issued a state of emergency for Fayette and Kanawha counties.

No major injuries were reported in either of the accidents.

A boom in North American oil production has sent an unprecedented amount of crude oil onto the tracks, with trains carrying more than 40 times what the they carried in 2008. But the increased traffic has meant more derailments.

The worst accident occurred in July 2013 in Lac-Megantic, Quebec, when 47 people were killed after a runaway train derailed and exploded.

There have been more than a dozen derailments involving crude oil across North America since the beginning of 2013, including in Alabama, Colorado, Virginia, North Dakota and several in Canada.

The number and frequency of trains passing through the state has many citizens and officials worried about what an accident could mean for Pittsburgh or Philadelphia.

A PublicSource data analysis in August of rail lines in Pittsburgh and populations living nearby showed that more than 40 percent of the city’s population lives within the one-half mile of the federal evacuation zone recommended for crude oil accidents.

Refineries in Philadelphia take in large amounts of crude oil from the Bakken Shale, meaning crude oil trains roll through the state daily.

Fueled by an outcry of calls for increased safety regulations, the Obama administration in July proposed rules that would phase out tens of thousands of older tank cars, called DOT-111s. Officials and rail-safety groups have said the regulations are taking too long.

On Feb. 5, the U.S. Department of Transportation sent a new tank car standard to the White House Office of Management and Budget for review.

While the department is expected to mandate a tougher construction standard for tank cars to better withstand derailment forces and prolonged fire exposure, it will be May before the rule goes into effect.

If there are no other delays, it will be October at the earliest before the newer cars will go into production. And depending on how much time the department gives the industry, it could be several years before the older and newer tank cars are retired or updated to meet the new requirements.

DOT-111s have been widely condemned by national safety regulators because they’ve been shown to spill their loads in the case of accidents for more than 20 years. The DOT-111s have been the workhorses for the crude-by-rail boom over the past few years, and thousands of them go through Pittsburgh.

All of the oil tank cars involved in the West Virginia accident were newer model CPC 132 tank cars, supposedly a stronger version of the DOT-111s, according to CSX.

The derailment may call into question whether these newer tank cars are up to snuff. The CPC 132, built since 2011, have failed in other derailments.

CSX was working with the Red Cross to address the needs of West Virginia residents, including shelters for those evacuated, according to a statement from the railroad. CSX and federal railroad safety regulators are investigating the cause of the derailment.

Here are some tweets we've compiled about the West Virginia crude oil derailment:

TAKE A LOOK: Kristen Soulsby sent this into our newsroom. Fire balls shooting into air at site of train derailment pic.twitter.com/jrS6EMkBXq

We are also working with public officials and other agencies in WV to address the needs of the community. More info: http://t.co/A1gkDLDI9a

Something to consider: WV refused to make oil train info public. Did the residents near today's derailment know? http://t.co/Y6eiN8WrxY

Crude oil train burns into the night across the Kanawha from Boomer, W.Va. pic.twitter.com/ZRDm60Gby9

The foundation and a charred truck is all that's left of a home destroyed by yesterday's train derailment #WVDerail pic.twitter.com/40MYtgeDiZ