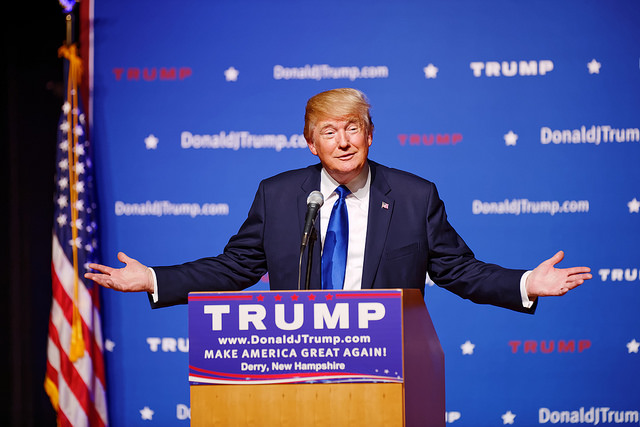 The usually unmasked President Donald Trump should not bring a campaign event to Allegheny County so soon after his COVID-19 diagnosis, according to County Executive Rich Fitzgerald. (File photo)

Donald Trump has won yet another presidential poll with the support of 24 percent of registered Republicans in Pennsylvania.

But, Trump’s lead in Pennsylvania may not be long lasting.

According to the Quinnipiac press release:

“Donald Trump may have the raw horserace numbers, but below the surface there is a looming problem: Pennsylvania voters give him stunningly bad numbers on trust, honesty and favorability,” said Tim Malloy, assistant director of the Quinnipiac University Poll.

For the Democrats in Pennsylvania, former Sen. Hillary Clinton led with 45 percent, followed by Sen. Bernie Sanders with 19 percent and Vice President Joe Biden with 17 percent.

And although she is the Democratic frontrunner, Hillary Clinton’s overall numbers are not much better than Trump’s.

Among registered Pennsylvania voters in the poll, the same percentage — 55 percent — had an unfavorable view of both Clinton and Trump. That was more than any other candidate.

Who gets the love? The one guy who hasn’t declared. Vice President Joseph Biden, a Scranton boy made good, is perhaps becoming a more important player in the 2016 presidential race, with a solid grip on the ‘from the gut’ support of Pennsylvanians.

The greatest proportion of Pennsylvania’s registered voters — 46 percent — had a favorable view of Biden and Rubio.

The pollsters called land lines and cell phones and had a margin of error of 4.7 percentage points.