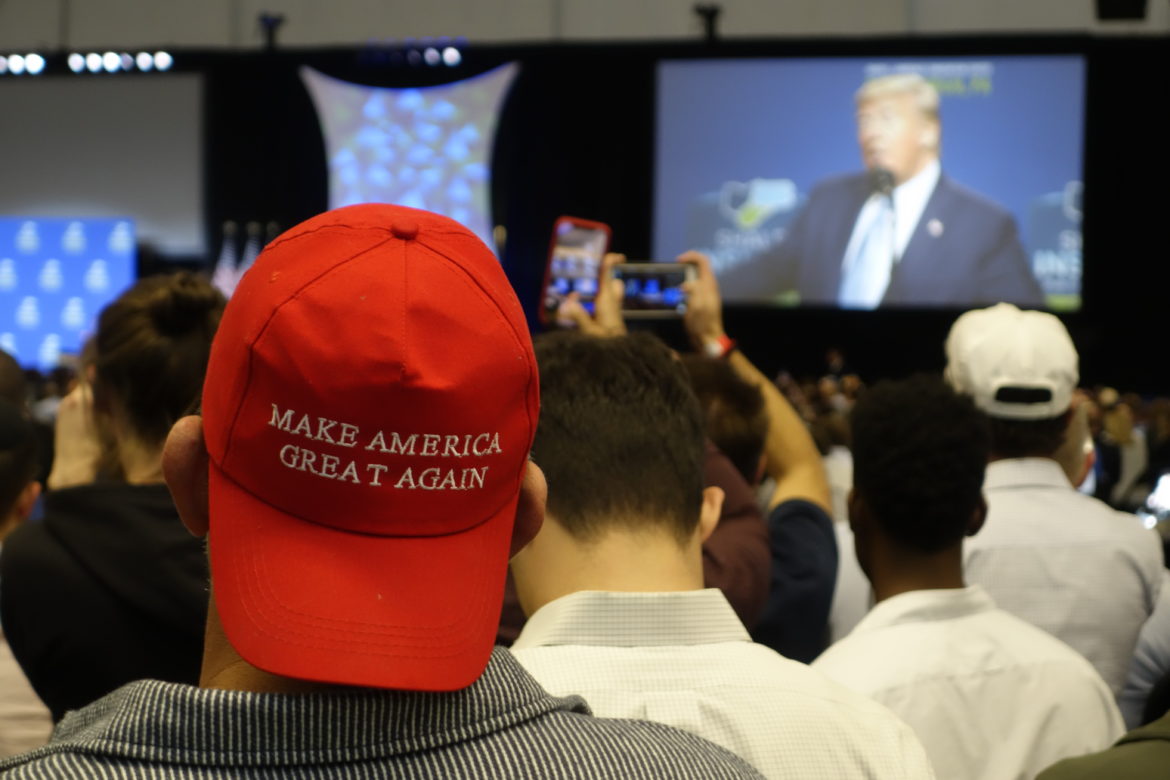 A speech by President Donald Trump in Downtown Pittsburgh in October 23, 2019. (Photo by Oliver Morrison/PublicSource)

The sharp divides of the country were on full display in downtown Pittsburgh Wednesday, as gas industry executives and supporters cheered on President Donald Trump who was in town to tout his record of promoting the oil and gas industry and opposing environmental regulations.

“I am here to represent the people of Pittsburgh, not the people of Paris,” Trump told the crowd at the Shale Insight Conference, echoing a tweet he sent underlining his commitment to withdraw from the Paris Climate Accord in 2020.

Outside of the David L. Lawrence Convention Center, protesters and some elected leaders (including Pittsburgh Mayor Bill Peduto) challenged Trump’s emphasis on fossil fuels above concerns for the environment. Some protesters also challenged Trump to renounce some of his rhetoric as his visit to Pittsburgh came nearly one year after the Tree of Life synagogue shooting — the deadliest attack on the Jewish community in the United States. Pittsburgh police arrested 14 protesters who police say blocked the off ramp of the Fort Pitt Bridge and would not heed police warnings to move.

The political stakes for the 2020 election are high in Southwestern Pennsylvania where some voters who traditionally voted Democratic voted for Trump in 2016 instead. Trump was a strong supporter of both the coal and natural gas industries in the region before he was elected and, in his speech, he said he had already delivered on “every single promise” that he made when he last spoke at the Shale Insight Conference in 2016.

Trump told the crowd he had repealed and weakened environmental regulations, such as the Clean Power Plan, and pushed through industry permits, such as those needed for the Dakota Access Pipeline. He promised to push against the fracking ban in New York state, which was hurting the local natural gas industry.

Peduto called Trump’s vision of the economy at the expense of the environment a 19th-century mindset. “President Trump’s outdated vision for Western Pennsylvania and the Rust Belt would put the final nails into the coffin of those struggling communities his economy has left behind,” Peduto wrote in a statement. 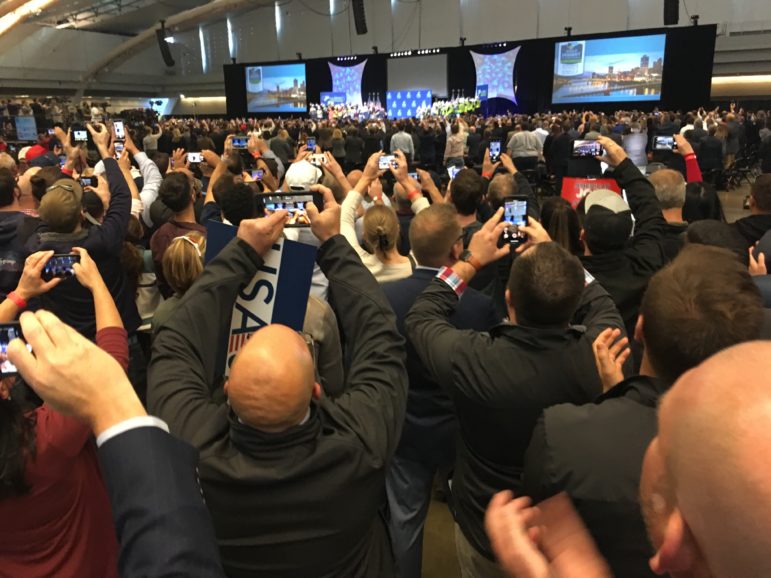 As Trump took to the stage, his supporters pulled out their phones. (Photo by Oliver Morrison/PublicSource)

Stephanie Coda of Carrick showed up several hours early to make sure she would find a place up front to see Trump. She traveled to Washington D.C. to see Trump’s inauguration in 2016 but had trouble finding a spot where she could see.

Coda fits the profile of one of the most critical voters in the country, according to some political pundits. She voted for President Barack Obama twice but then voted for Trump. 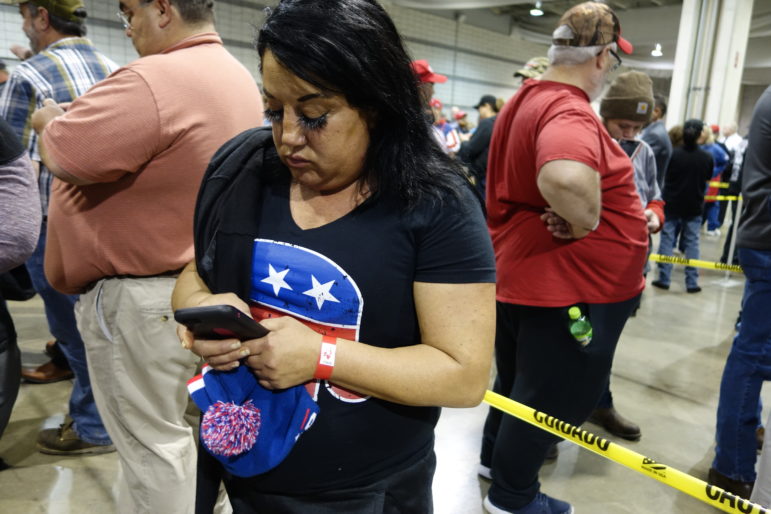 Stephanie Coda of Carrick said she likes the entertainment value of what Trump says and has started working the polls on election days for Republicans. (Photo by Oliver Morrison/PublicSource)

Coda, who said she receives disability benefits, started crying in line on Wednesday as she talked about how one of her two sons was denied disability insurance during the Obama administration. He has a hard time holding down a job when he gets depressed, she said, and can’t show up to work. She blamed Obama.

She sees immigrants at the mall in Carrick driving fancy SUVs and, while she doesn’t blame them for getting what they do, she is upset she is still having to take the bus.

Kevin McGee, of Canonsburg, took off work from his job as a directional well planner for a petrochemical company. He couldn’t think of any specific policies that Trump has implemented that he supports or opposes but likes that Trump supports his industry in general. McGee isn’t on social media, so he was looking forward to seeing Trump in person, without the filter of the media. He normally watches FOX, CBS and reads the Daily Caller.

In March, Sean Scott moved to Baldwin from Wellsville, Ohio, where he said there are no jobs and the opioid epidemic has wreaked havoc. Southfield Energy recently began construction on a $1.3 billion natural gas power plant about a mile from his home, he said, but he didn’t yet know of anyone who had gotten jobs from the new plant yet. In Pittsburgh, he’s landed a job at Rivers Casino and works with his wife to provide transportation to foster children in the area.

Scott used to be a Democrat but said he plans to vote Republican from now on because of how Trump has supported an economy with such a low unemployment rate. He noted that people make more at McDonald’s in Pittsburgh than even the best paying jobs back in Wellsville.

He and his wife have eight children. Scott argues with his eldest children about Trump. They don’t like the way Trump has treated immigrant families at the border. He thinks they have a point but that they should come into the country legally instead. 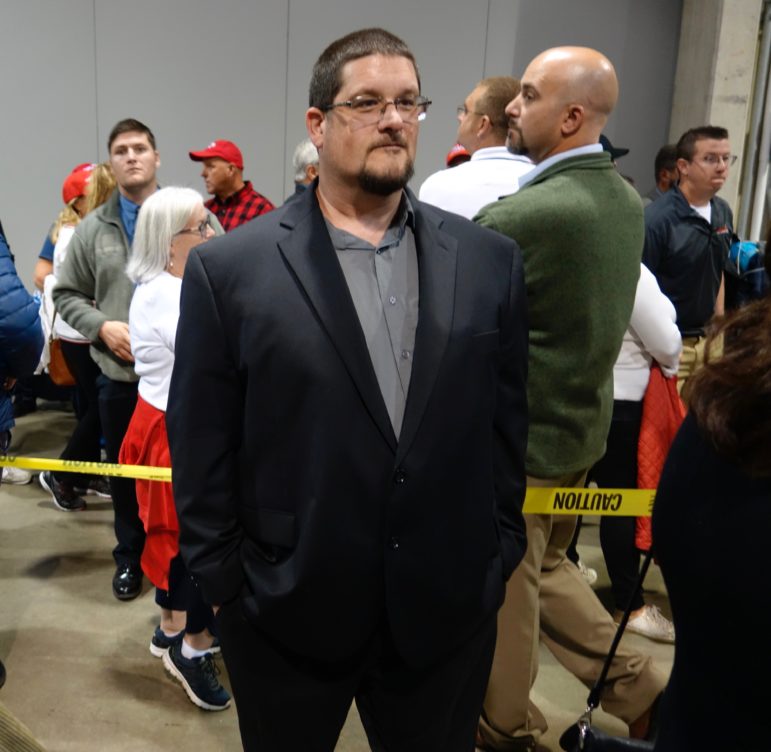 Sean Scott is happy with how the economy is working under Trump. (Photo by Oliver Morrison/PublicSource)

Jim Robinson, a union worker for 35 years in Meigs County, Ohio, drove three-and-a-half hours on Tuesday night to see his wife at the Wednesday speech, where she was one of the union workers with hard hats on stage behind Trump. She joined a union four years ago and now helps Robinson with his pipeline welding. The extra income from her work in the natural gas industry recently allowed them to expand their Ohio home. They have 14 children, nine of whom they adopted.

He didn’t support either of the Bush presidents and voted for Obama because he felt compelled to vote for his economic interests. And now he is voting for Trump.

“He has done what he said he would,” Robinson said. 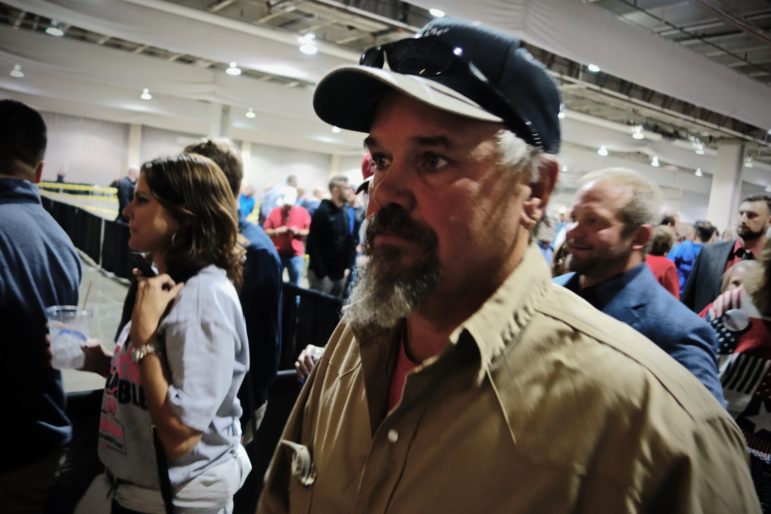 Jim Robinson is one of the voters in the Rust Belt who used to vote Democrat but voted for Donald Trump in 2016. (Photo by Oliver Morrison/PublicSource)

Before Trump even landed in Pittsburgh, hundreds of protesters gathered at Point State Park. Native American elders Guy Jones and Cheryl Angel led a water ceremony and rally under the charge, “Defend our water.”

The protesters called fracking and its related waste both a public health concern and an environmental concern. Leaders stressed the necessity of everyday people holding corporations accountable for valuing profits over the environment. Many also urged protesters to vote for politicians who believe in and take action to combat climate change.

“When you look at what’s happening in this country, especially in regards to corporations and their abuse of the resources … we are at that crucial point where we need to take action now,” Jones said. “If there’s going to be a future, something needs to be done.” 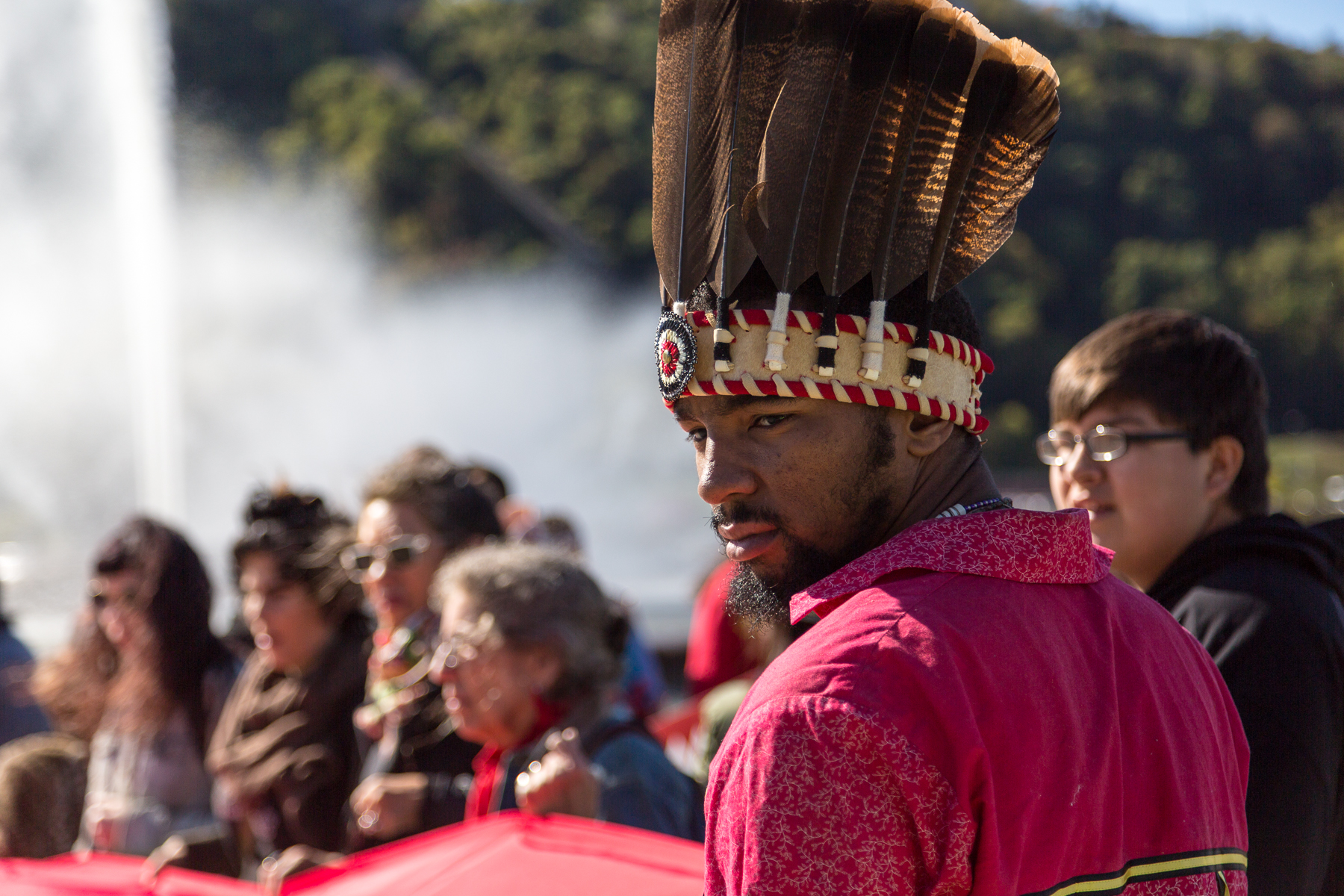 One of the Native American dancers who took part in the water ceremony and rally. (Photo by Nick Childers/PublicSource) 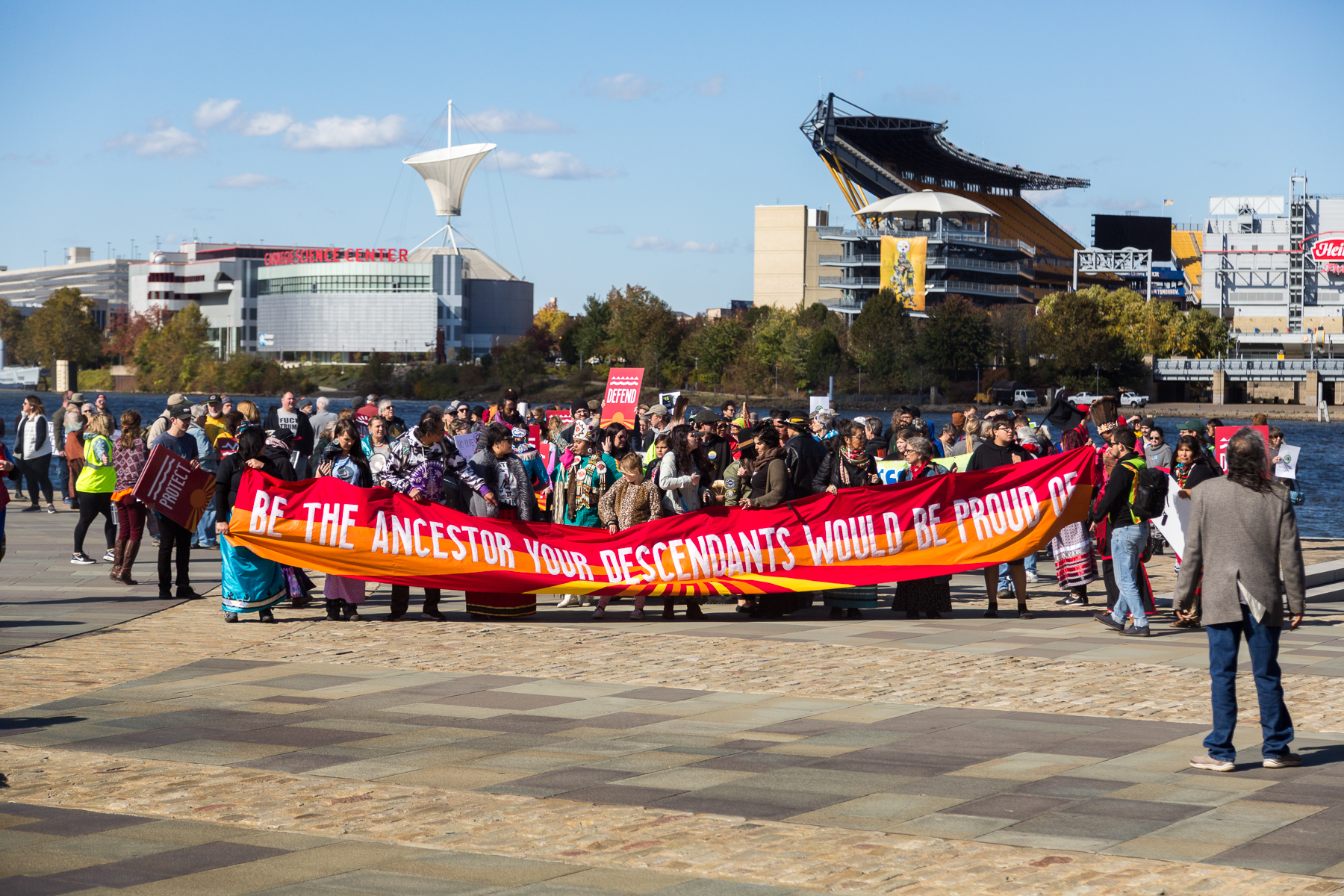 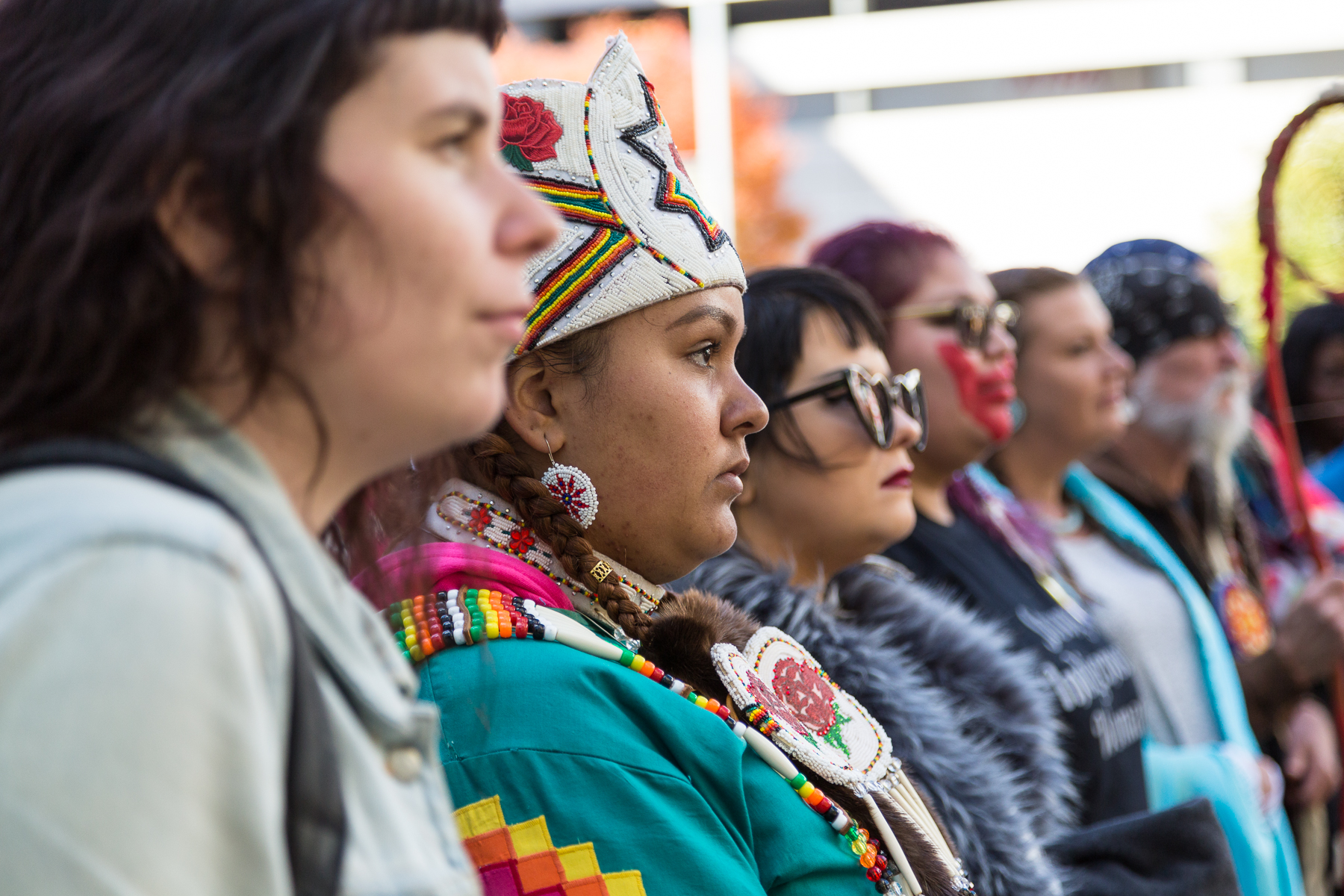 The speakers stressed the necessity of reconnecting to the Earth and seeing oneself as a part of a larger ecosystem that needs defending.

In the early afternoon, Angel led the crowd — which included representatives from PennEnvironment, the Climate Change Reality Project and People over Petro — in a Native American water ceremony. Many participants brought water from other locations. Angel combined all the samples into one jar as part of the ceremony, a symbol of unity.

After the ceremony, protesters marched from Point State Park to a rally outside of the Convention Center. A group of Indigenous people at the end of the march held a banner that read: “Be the ancestor your descendants would be proud of.”

Jones commended the diversity of the protesters who came together under one cause. “That’s my America. That’s your America. And we cannot be silent and let this man [and his administration] decide the future for our children and our grandchildren,” he said, referring to Trump. 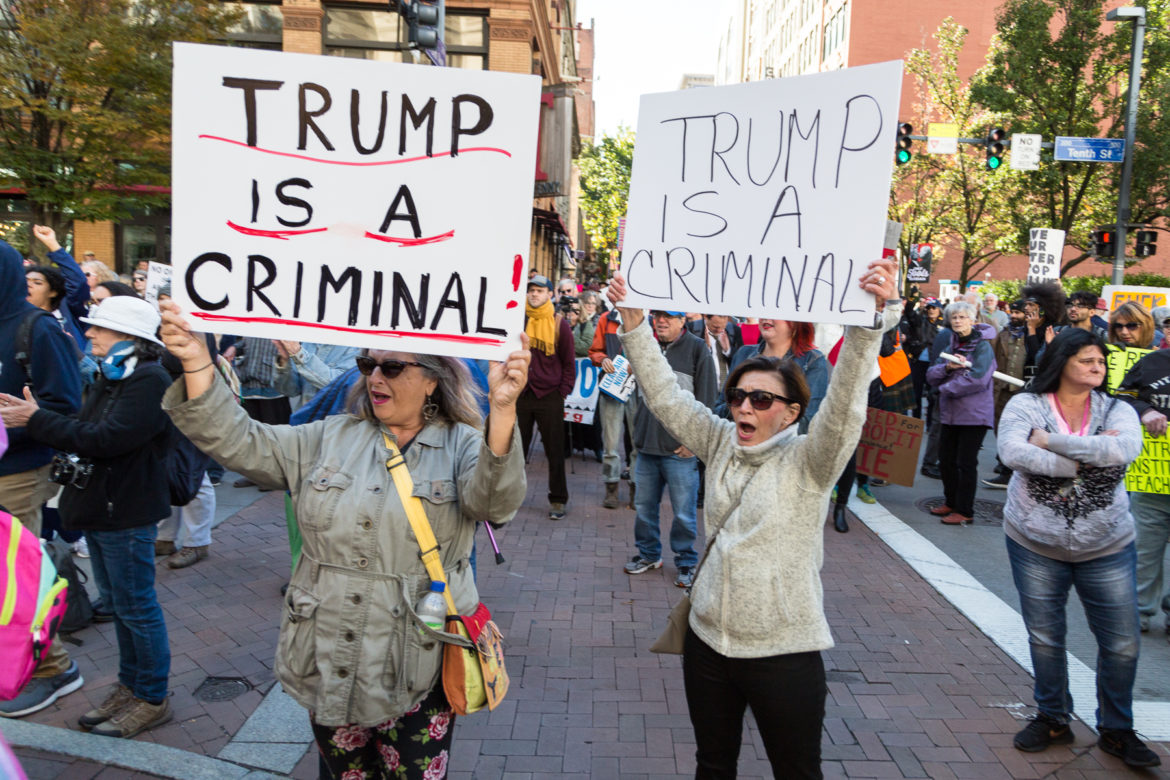 Protesters hold signs at the rally outside the Convention Center. (Photo by Nick Childers/PublicSource)

Deidra Hubay, 22, is a student at Duquesne University who recently finished her service in the Marine Corps. She referenced last year’s Tree of Life synagogue shooting and Trump’s rhetoric as two of the reasons she came out to protest.

“Trump’s inspiring a lot of hate and intolerance,” she said. “I wanted to make it clear that we don’t want hate here.”

“For me, it was coming and standing in solidarity for people who couldn’t be here,” said Shane Freeman, 48, of Bethel Park.

“The real atrocity is stealing their land,” she said.

Remy Davison is a PublicSource intern. He can be reached at remy@publicsource.org.