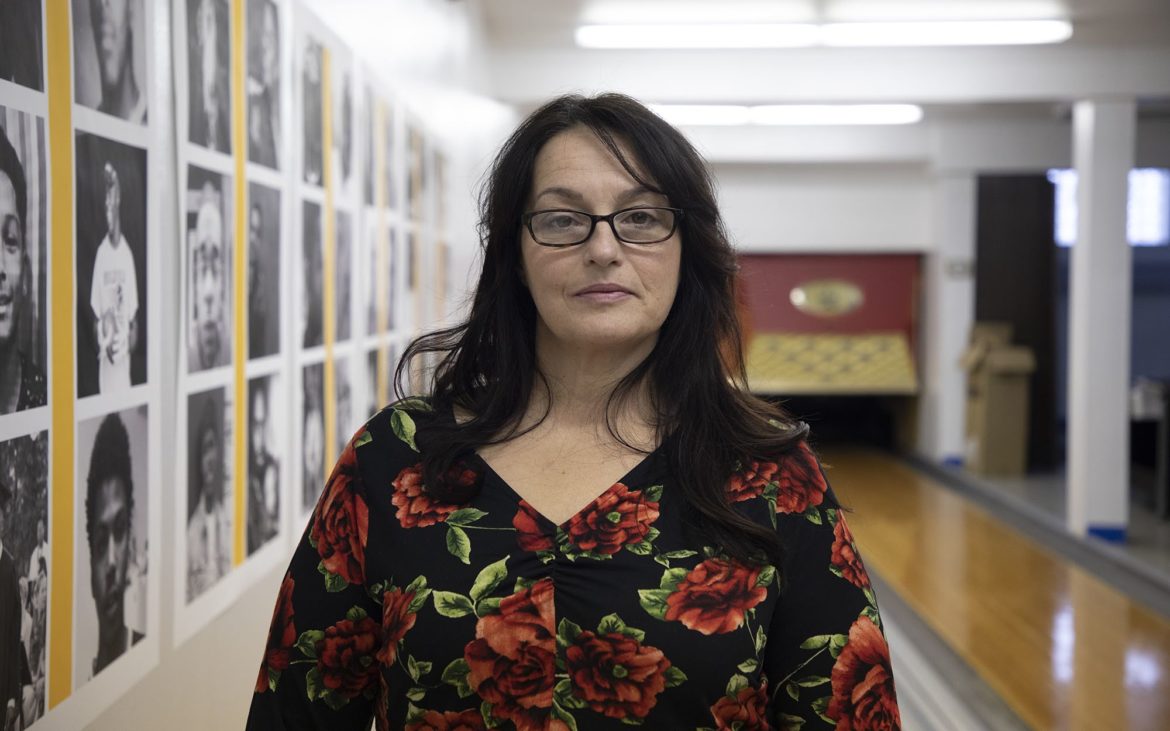 Cathy Welsh, 44, of Turtle Creek, lost her son to gun violence in November 2017. The mural (left) in the Greater Valley Community Services in Braddock depicts teenagers and young adults from the Woodland Hills School District who have also died due to gun violence since 2005. (Photo by Kat Procyk/PublicSource

In the days following the Tree of Life synagogue shooting on Oct. 27, house cleaner Cathy Turner-Welsh reached out to the Jewish families she works for in Squirrel Hill.

“Cathy, keep us strong,” some said to her. Turner-Welsh, who lives in Turtle Creek, has run a cleaning business for 17 years. She knew her 25 families in Squirrel Hill would need support after a gunman killed 11 people that Saturday morning.

Just one year earlier, these same families were comforting her when gun violence took the life of her son, Jerame, then a 16-year-old junior at Woodland Hills High School.

“Cathy, we love you,” she remembered them saying. “If you have to cry, go right ahead.”

Turner-Welsh’s personal life and community work had prepared her to offer help this time. Likewise, people traumatized by the Tree of Life killings may find allies in parts of the Pittsburgh region already experienced in responding to gun violence trauma.

Rev. Paul Abernathy is director of FOCUS Pittsburgh*. His Hill District-based program provided trauma first aid the day of the Tree of Life shooting, on-site and at a subsequent vigil and other events. During the “acute” phase of trauma, Abernathy said, traumatized people are in shock. FOCUS counselors helped about 125 people to feel more stable, get information on coping strategies and understand how to talk to children about the tragedy.

Experts in trauma care differentiate between sudden violent events, such as the Tree of Life shooting, and chronic forms of violence, such as war zones or ongoing gun violence within neighborhoods. In Pittsburgh, chronic gun violence occurs in some neighborhoods, but not others, and that trauma is disproportionately carried by the city's black communities.

From 2007 through 2017, the city of Pittsburgh experienced 599 homicides, the vast majority of them resulting from firearms, according to the Allegheny County Department of Human Services [DHS]. 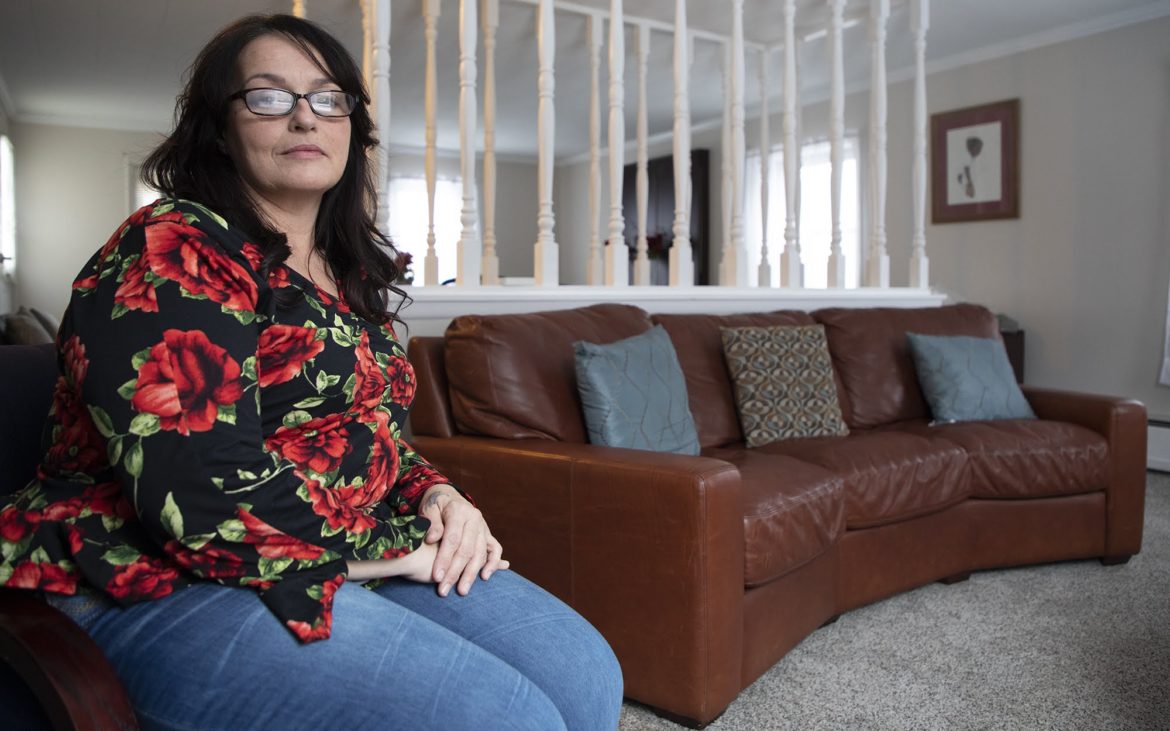 Cathy Welsh did not seek therapy after her son's murder last year and mother's suicide when she was 19. Rather, she turned to volunteer work to help others in vulnerable positions and to advocate against gun violence. (Photo by Kat Procyk/PublicSource)

Squirrel Hill accounted for just one of those murders in that time period. The area covered by the Woodland Hills School District had 60 murders.

The district serves 12 municipalities in the Monongahela Valley, including Turtle Creek and nearby municipalities like Braddock and Rankin. While the area's majority white population is aging, its black communities are growing, and about two-thirds of Woodland Hills students are black. Meanwhile, Squirrel Hill's neighborhood population is more than three quarters white

Abernathy has been working with Turner-Welsh and other families in Woodland Hills since last November. Just three days before Turner-Welsh’s son died, an eighth grader was shot and killed. This past June, an East Pittsburgh police officer killed Woodland Hills High School student Antwon Rose II.

“For me, every death as a result of gun violence is catastrophic to people who experience it,” Abernathy said. “I still think about the pain in the faces of those children in Woodland Hills ... that rapid succession of death that overtook them last year. That’s still very, very deep in their memory.”

FOCUS Pittsburgh deploys teams of up to six certified counselors throughout Allegheny County, with the goal of arriving within 24 hours after a traumatic event such as a homicide. People in need of counseling can step into the privacy of FOCUS’s mobile response vehicle, though Abernathy emphasizes the need to “go out and engage people in their own space.” FOCUS also connects people to services, such as health care and food, as part of “trauma-informed community development.”

Abernathy emphasized that “so much of our work is in underserved black communities across the region.” 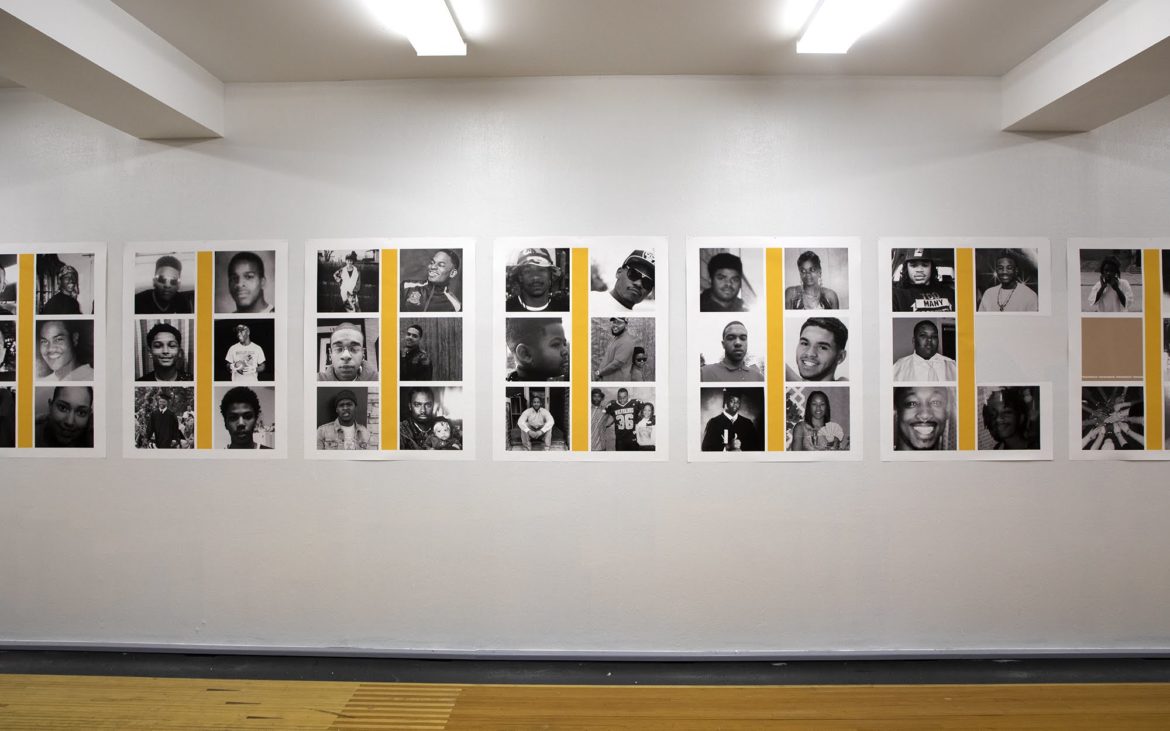 A mural at Greater Valley Community Services depicts Woodland Hills students who have been killed due to gun violence since 2005. (Photo by Kat Procyk/PublicSource)

In 2017, law enforcement responded to 19 reports of gunfire in Squirrel Hill, less than 1 percent of the city’s total, according to DHS. Nearby Homewood, whose residents are predominantly black, reported 20 times more incidences of shots fired, with 383 reports.

“The effect that it has on the community, as a whole — to hear gunshots in your community, going to young people’s funerals. You know, that’s hard,” said Richard Garland, assistant professor at the University of Pittsburgh’s Graduate School of Public Health and head of the Violence Prevention Initiative. Both FOCUS and Garland’s program have received funding from the Allegheny County Health Department.

Garland visits gunshot victims in the hospital, often young men embroiled in a feud and the “disease” of violence, he said. Garland himself was involved in gangs as a teenager growing up in Philadelphia. He offers a “warm hand” and connects gunshot victims to other programs in order to “interrupt the transmission of the disease” as they may want to retaliate.

Garland points to poverty as a root cause of violence and a hindrance to getting trauma care. Most gunshot victims don’t have insurance, he said. Additionally, they may avoid counseling services altogether because they feel others can’t relate to them.

“We don’t think about the mental health and the trauma that these families are feeling on a day-to-day basis,” he said. “When they step out of their houses, they don’t know if they’re coming back that night.”

For her part, Turner-Welsh, the mother of three other children, is working with about 70 Woodland Hills families that have lost kids to gun violence. They’ve formed a monthly grief support group and a walk memorializing loved ones. “Momma Cath” — as her many mentees call her — is also developing a youth peer-to-peer counseling group. And she delivered pictures of children who’ve been killed to a school board meeting, hoping to move members to provide youth and families with better trauma care.

Garland believes Allegheny County’s DHS is “doing everything that they can” in the Woodland Hills School District and throughout the county, but it’s not enough, and “resource-poor” communities still have enormous needs for trauma care.

Abernathy agreed. “As a region, we have expertise. [But] we need to build the capacity so that when this happens, people aren’t left on their own to figure out what to do.”

“What I saw in Squirrel Hill is, honestly, what I’d love to see in neighborhoods across our region,” he added, referring to the many programs and leaders giving support to people traumatized by the Tree of Life shooting, and who are now formulating long-term plans for trauma care. “This could be a great opportunity for us to really rise to our calling and embrace who we really are called to be as a city and as a region ... people who are willing to cross neighborhood boundaries whenever we go through traumatic events.”

“What I saw in Squirrel Hill is, honestly, what I’d love to see in neighborhoods across our region." 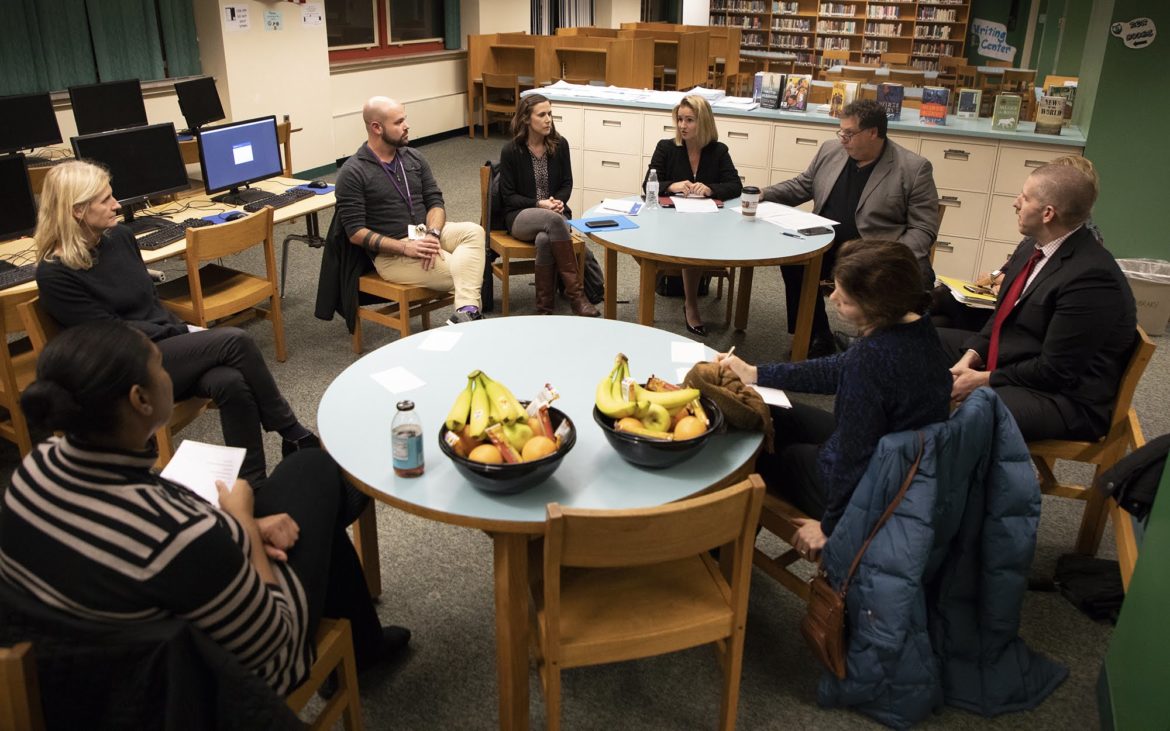 Pittsburgh Public Schools hosted a Nov. 19 gathering at Allderdice High School to discuss how parents could care for themselves and their children after traumatic events. (Photo by Kat Procyk/PublicSource)

Iris Valanti, spokesperson for Squirrel Hill-based Jewish Family and Community Services, a primary provider of counseling services for people affected by the Tree of Life shooting, said this tragedy is helping people empathize with others affected by gun violence. “Human beings don’t really understand things until they happen to them,” she said. “Gun violence is everywhere, and I think as an organization we’re going to be a lot more sensitive to that all around.”

*The Allegheny County Health Department has provided funding to FOCUS Pittsburgh and the Violence Prevention Initiative. The Health Department received funding for the anti-gun violence efforts from The Heinz Endowments, which also supports PublicSource.

Correction (1/3/2019): The above footnote previously misidentified the funding source from Allegheny County.